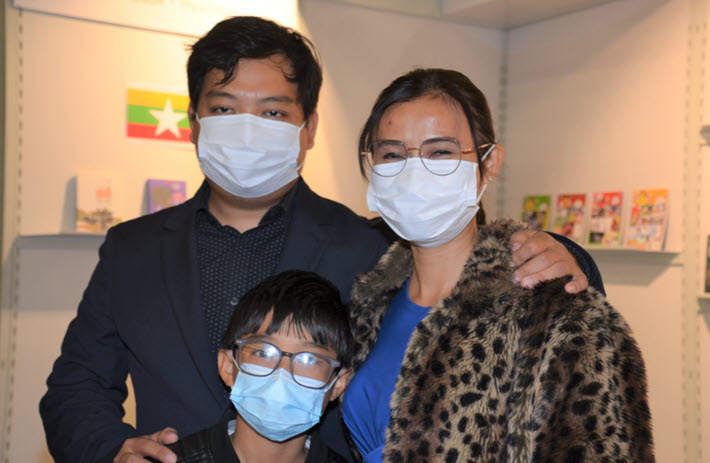 ‘Myanmar is totally silent in world literature,’ says publisher San Mon Aung. He and his family have left their home country for safety.

‘We Need a Voice’

Myanmar’s San Mon Aung is a publisher in self-imposed exile here at the Messe Franfurt, having left the country in August with his wife Chiri and 8-year-old son Bryan, both with him on the NDSP Books stand, Hall 4.1./F106.

“We left because the situation isn’t safe in Myanmar following the military coup in February,” he says about making the move to their new home in Paris.

“There have been bombs in Yangon and Mandalay. The situation is too unstable. It’s a terrible situation for all publishers. Inflation is high and the currency has collapsed. The cost of paper is very high.

“Most publishers have stopped because of the price of paper and the unstable political situation.”

San Mon Aung is also an author and bookseller, with both a physical store in Yangon and an online operation called WE.  He has written six books, including You Can’t Erase the Stone Engraving with an Eraser, which is based on the 2012 “saffron revolution,” so named for the color of the marhing Buddhist monks’ robes. The book is banned in Myanmar.

San Mon Aung says he thinks democracy will return to the country and hopes that he and his family can go home again later this year.

He’s ambivalent about the former leader of the National League for Democracy, Aung San Suu Kyi, who has “fallen idol” status in many countries.

“I understand her situation,” San Mon Aung says. “She has tried to stop the ethnic cleansing of the Rohingya people and at the moment she’s under arrest.”

As a publisher, San Mon Aung produces some big names in translation to Burmese, among them Michelle Obama.

Just before Frankfurt Book Fair opened this week, he sold a graphic novel called Pa Jau to Danish publisher Farenheit and is at the fair with a mission.

“Myanmar is totally silent in world literature,” he says.

“We don’t have any voice.  We need a voice. And Frankfurt is the best place to showcase it.”

More from Publishing Perspectives on the freedom to publish is here, more on Myanmar is here, and more on Frankfurt Book Fair is here.