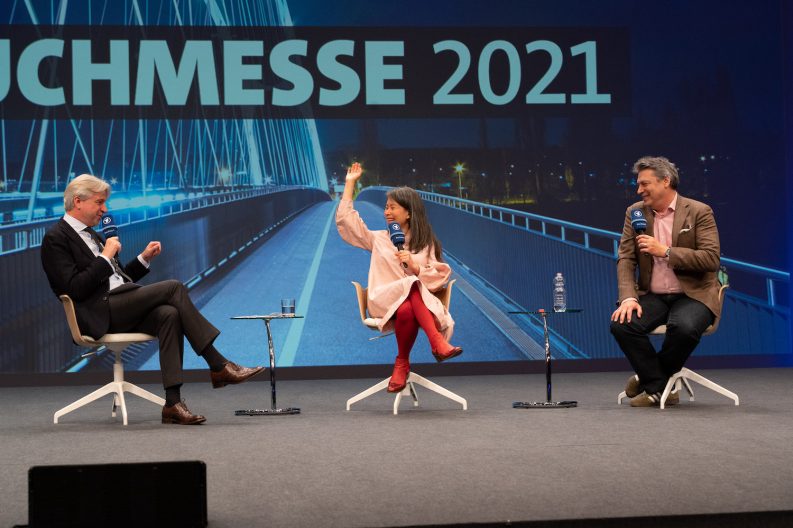 As part of the Guest of Honor Canada program at Frankfurter Buchmesse, authors Kim Thúy and Michel Jean spoke about the role of identity in storytelling. 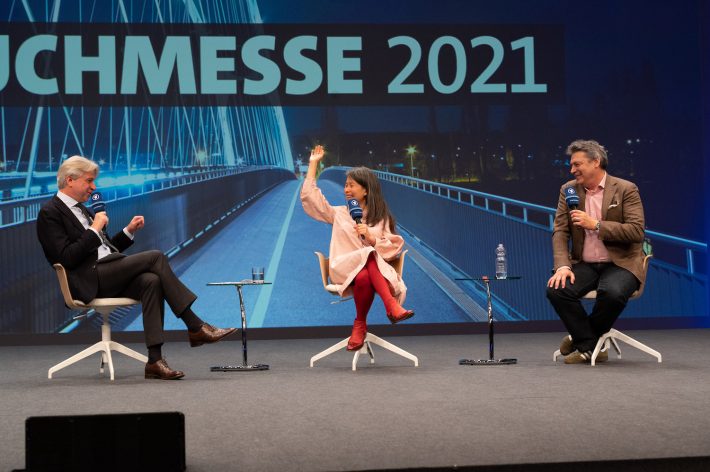 The first author interview Day One of the Frankfurter Buchmesse 2021 began with fair president and CEO Juergen Boos interviewing Québec authors Kim Thúy and Michel Jean on the ARD Stage in the Festhalle. The first question Boos put to them was, “How Canadian are you?”

Kim Thúy, who left Vietnam at age 10 as a “boat person” and is one of Québec’s bestselling authors said, “I am 100 percent Canadian, and I am also 100 percent Vietnamese…I love both cultures unconditionally; if we love a culture enough to take it, then it is ours.”

The difference between Thúy and him, said Michel Jean, who is Innu from the Mashteuiatsh Community, is that instead of coming from somewhere else and “embracing Canada”, his people were already there “when Canada came and embraced the country. I’m from the Innu nation, I’m a Quebecer and a Canadian too.”

Jean sees himself as an Indigenous writer which means that his background influences his perception. He likes being from Canada where he can speak his mind freely, he added.

“Being Canadian is the freedom to choose what you want to be,” said Thúy.

She was born into a large, close-knit family, and said she has “enough stories for three lives.” She became reacquainted with her country of birth when she returned as an adult and a practicing lawyer. She had left with a memory of a “dark Vietnam”, one that was silent under Communist rule. 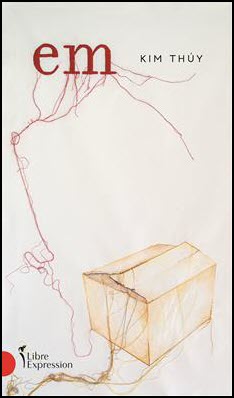 When she returned in the 1990s, her perspective changed. After living in Canada for 43 years she has enough of an outsider’s perspective to look at Vietnam “with love”, and the possibility to “ignore” what she doesn’t like about her country.

Thúy’s 2020 novel, Em, translated into English by Sheila Fischman and longlisted for the 2021 Scotiabank Giller Prize is based on historical events, intertwining Operation Babylift, in which thousands of biracial orphans were evacuated from Saigon in 1975, and the worldwide growth of the nail salon industry dominated by Vietnamese.

His inspiration came from his great grandmother, Almanda, who fell in love with an Innu when she was 15 and became an integral part of the culture, although as a book lover she brought physical books with her to read to her daughter, in an oral story-telling society.

Jean used Almanda’s story to write about how Indigenous people in Québec and Canada were pushed into forced settlements. The topic is not taught in Canadian schools, said Jean, and it remains a sensitive question. 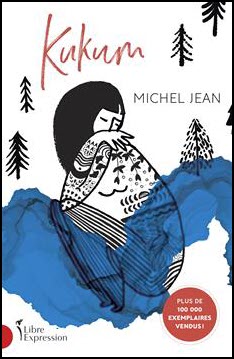 “It’s a universal story and it’s also part of Canadian history. We might not like it, but it exists,” he said.

But things are changing, said Jean. People are reading a story by an Indigenous writer about an Indigenous story, and “this would not have been possible ten years ago.”

Why has it taken so long, asked Boos?

“It’s not the part of history that Canadians like to tell about themselves. We like to tell the story of a generous country, we play a role on the international scene as peacemakers,” said Jean.

“So, it’s difficult for Canada to admit, well, what the Americans and Canadians did is about the same, to Indigenous people.”

In Québec it’s almost worse, said Jean, because Francophones in Québec see themselves as victims of the Anglophones, as a David against a Goliath. “When you get on the Indigenous question…that’s difficult for them.” Jean added that he receives ten or 20 messages of thanks each day from readers, saying they they had not been taught this history in school. But “Canadians are open-minded people so there’s hope.”

Thúy said, “It’s difficult to look back at ourselves and say that we’ve committed those cruelties and that we are at the core of horrible stories. It’s the same thing with Vietnam, we haven’t written yet the page of that transitional period.”

Thúy’s book has not been translated into Vietnamese. They are not ready to look at this history, she said, that “there were one million Vietnamese who fled the country, why, and you don’t want to say that your own children were running away from you.” Hopefully, through literature this past can be embraced, said Thúy.

“You and I tell difficult stories, cruel stories, with a soft voice,” Jean told Thúy.

“When I try to explain to Québecers and Canadians, our stories, they’ll argue,” said Jean. Even if his response is backed by facts, and he’ll win the argument, “will I have convinced them?

“With literature you put that person in the shoes of your character, they live, they feel, they know, you need no argument, that’s the powerful side of literature…that’s magic.”

Boos told his guests that it had taken the Frankfurt book fair 30 years to convince Canada to be the Guest of Honor, and that it was his predecessor’s dream. There are “so many stories from Canada,” he said.