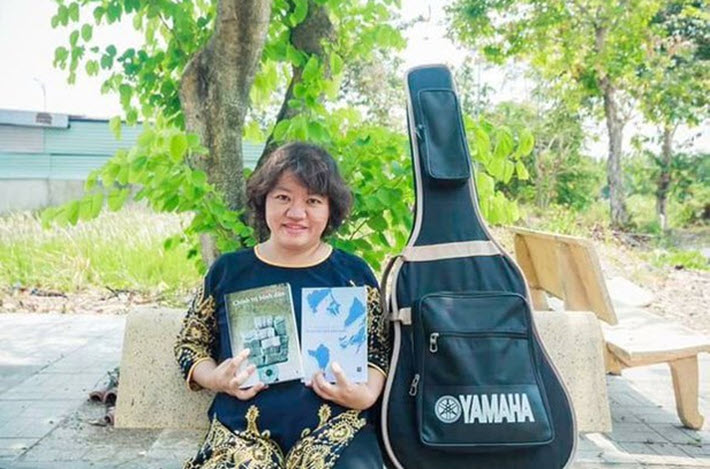 With a court date and indictment now in place for Vietnam’s Pham Doan Trang, freedom-of-speech and human-rights organizations are calling for her immediate release.

A photo credited to Pham Doan Trang’s Facebook account and used by news media in covering her year-long detention shows her holding books said to be critical of the Hanoi government. Image: Radio Free Asia

A ‘Worsening Assault on Freedom of Expression’

Our regular readers will recall the arrest shortly before Frankfurter Buchmesse last year of Pham Doan Troan, a co-founder of the 2020 Prix Voltaire-winning Liberal Publishing House. She had been scheduled to appear during a program at Frankfurt 2020 when she was seized, according to reports, in Ho Chi Minh City on charges of carrying out anti-state activities.

As Radio Free Asia and other news media have reported, there now is a trial date set for November 4. An attorney who was allowed to meet with her has said that she’s in poor health after a year of pre-trial detention.

An indictment has been released only this month ahead of the trial date. The ongoing coverage from Radio Free Asia indicates that she is charged under article 117 of the Vietnamese penal code, accused of “making, storing, distributing, or disseminating information, documents and items against the Socialist Republic of Vietnam.” Article 117 of the 2015 code is said to be a successor to Article 88 of the 1999 code.

With an indictment now having surfaced and a court date set for next week, 28  human-rights and freedom-of-expression organizations have signed on to a joint letter, calling on the Vietnamese authorities to “immediately and unconditionally release and drop all charges against her.

“The persecution of Doan Trang and other human rights defenders, including independent writers and journalists, is part of the worsening assault on the rights to freedom of expression and information in Vietnam,” the text of the letter says.

The 28 advocacy associations engaged in this joint objection include the International Publishers Association (IPA), which annually awards the Prix Voltaire for valor in the face of resistance to the freedom to publish. The full group of cooperating organizations comprises:

Here is the text of the letter signed and now being publicized by the 28 organizations:

A month before her arrest, Doan Trang was the subject of a joint communication issued by five UN Human Rights Council Special Rapporteurs (independent experts) responding to mounting harassment against her and other independent writers and journalists. In its December 2020 response, the government of Vietnam denied all allegations of wrongdoing and, without providing evidence, justified Doan Trang’s arrest as a response to her alleged abuse of the internet to overthrow the State.

It is clear that Pham Doan Trang is being persecuted for her long-standing work as an independent journalist, book publisher, and human rights defender, known for writing about topics ranging from environmental rights to police violence, as well as for her advocacy for press freedom. Vietnamese authorities have regularly used Article 88 (and later Article 117) of the Penal Code to punish human rights defenders, independent journalists and writers, and others who have peacefully exercised their human rights.

International human rights experts have repeatedly called on Vietnam to amend the non-human rights compliant provisions of its Penal Code and bring them into line with international law. In 2021, four UN Special Rapporteurs noted that Article 117 is ‘overly broad and appears to be aimed at silencing those who seek to exercise their human right to freely express their views and share information with others.’ In 2019, the UN Human Rights Committee called on Vietnam ‘as a matter of urgency’ to revise vague and broadly formulated legislation, including Article 117, and to end violations of the right to freedom of expression offline and online.

In June 2021, the UN Working Group on Arbitrary Detention, responding to the detention of an Independent Journalist Association of Vietnam member, pointed to a ‘familiar pattern of arrest that does not comply with international norms, which is manifested in the circumstances of the arrest, lengthy detention pending trial with no access to judicial review, denial or limiting of access to legal counsel, incommunicado detention, prosecution under vaguely worded criminal offences for the peaceful exercise of human rights, and denial of access to the outside world. This pattern indicates a systemic problem with arbitrary detention in Vietnam which, if it continues, may amount to a serious violation of international law.

Since her arrest, Doan Trang has been held incommunicado, until 19 October 2021, when she was finally allowed to meet with one of her lawyers after having been denied access to her family and legal representation for over a year. Prolonged incommunicado detention is a form of prohibited ill-treatment under international law under the Convention against Torture and Other Cruel, Inhuman or Degrading Treatment or Punishment and Article 7 of the International Covenant on Civil and Political Rights (ICCPR), which Vietnam has ratified. As a result of this denial of her rights to a fair trial, liberty, and security, she has faced increased risk of torture and other ill treatment.

On 30 August 2021, following the conclusion of the police investigation, the Hanoi Procuracy Office issued its formal indictment against Doan Trang. Alarmingly, her family did not learn of this until more than a month later, on 7 October, and only after having requested information from the authorities. The family and lawyers were again denied visitation. Authorities at the time also refused to provide Doan Trang’s lawyers with a copy of the indictment or access to the evidence they had prepared against her. This undue delay in the proceedings and refusal to grant access to a lawyer of her choosing amounts to a violation of her right to a fair trial under Article 14 of the ICCPR.

According to the indictment, which was only made public on 18 October—more than a year after her arrest—Doan Trang is being charged under Article 88 of the Penal Code, for alleged dissemination of anti-State propaganda. The authorities dropped the similar charge under Article 117 of the amended Penal Code.

The indictment calls attention to three specific pieces of writing. It mentions a book-length report Doan Trang wrote with Green Trees, an environmental rights group, about the 2016 Formosa Ha Tinh Steel disaster; a 2017 report on the freedom of religion in Vietnam; and an undated article titled ‘General assessment of the human rights situation in Vietnam.’ The indictment also accuses her of speaking with two foreign media, Radio Free Asia and the British Broadcasting Corporation (BBC), to allegedly defame the government of Vietnam and fabricate news. These publications highlight Doan Trang’s vital work as an author, journalist, and human rights defender who has worked tirelessly for a more just, inclusive, and sustainable Vietnam. Her peaceful activism should be protected and promoted, not criminalized, in line with the UN Declaration on Human Rights Defenders, the undersigned organizations said.

The use of human rights reports as evidence in a criminal prosecution sends a chilling message to civil society against engagement in human rights documentation and advocacy, and increases the risk of self-censorship. In light of the fact that Doan Trang’s report on Formosa was also part of direct advocacy with the UN Special Rapporteur on toxics and human rights in 2016, its inclusion as evidence against her may constitute an act of intimidation and reprisal for cooperation with the UN and consolidate an environment of fear, as already noted by several UN actors.

Ahead of her 4 November 2021 trial, Doan Trang was only granted her first meeting with her lawyer on 19 October 2021. While the lawyer noted Doan Trang’s overall positive attitude, he also recounted several serious medical concerns. Doan Trang’s legs, which were broken by the police in 2015, have been in greater pain as a result of the denial of adequate medical care during her detention. She has not been allowed to visit a doctor to treat other preexisting conditions, including low blood pressure, and as a result she has lost 10 kilograms.

We denounce this unacceptable denial of her rights to a fair trial and freedom from torture and other cruel, inhuman, or degrading treatment and call for an immediate end to her arbitrary detention, and for all charges against her to be dropped.

Doan Trang is among the leading voices and best-known independent writers in Vietnamese civil society and recognized internationally for her human rights advocacy. She is the author of thousands of articles, blog entries, Facebook posts, and numerous books about politics, social justice, and human rights.

She is the co-founder of the environmental rights group Green Trees, and the independent media outlets Luat Khoa Magazine, The Vietnamese Magazine, and the Liberal Publishing House. Doan Trang is the recipient of the 2017 Homo Homini Award presented by Czech human rights organization People in Need and the 2019 Reporters Without Borders Press Freedom Award Prize for Impact. In 2020, the International Publishers Association awarded her organization, the Liberal Publishing House, with their Prix Voltaire Award.

Pham Doan Trang is no stranger to harassment and intimidation by the State for her writing and human rights advocacy. This has included torture and other ill-treatment, including physical assault. In 2015, she was beaten so badly by security forces that she was left disabled and has since often needed crutches to aid her mobility. In 2018, she was hospitalized after being subjected to torture in police custody. For three years preceding her arrest, she was forced to move constantly and lived in fear of intimidation and harassment by police and other State authorities.

In view of the above, we call on the government of Vietnam to:

More from Publishing Perspectives on the International Publishers Association is here, more on Vietnam is here, and more on the Prix Voltaire is here.