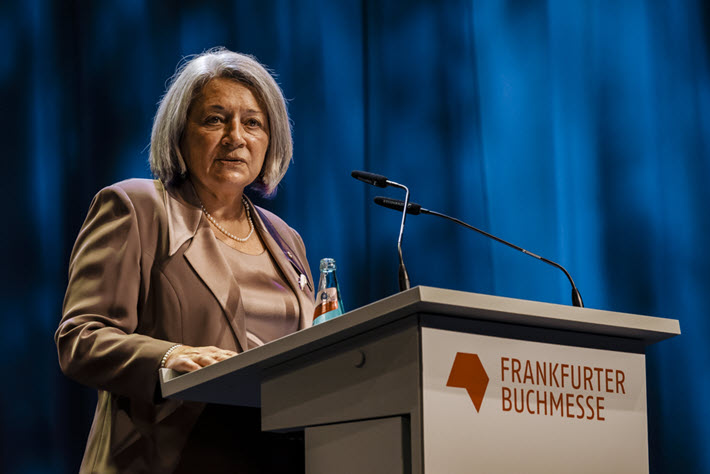 The 73rd Frankfurter Buchmesse Opening Ceremony reached its most compelling moment on Tuesday evening (October 19) when the Canadian governor general Mary May Simon told an invited audience of several hundred people, “I believe that all of our stories are creation myths.

“Our stories are how we create ourselves.”

While the shadow of the coronavirus COVID-19 pandemic naturally held sway over much of the evening—a celebration of a return to this year’s physical iteration of the trade show—May Simon’s firm remarks brought bigger issues to the fore. Bigger issues and bigger tasks for the world of literature to embrace.

She is Canada’s first Indigenous governor general, born in Arctic Québec, in Nunavik. She held the crowd captive in the cavernous FestHalle at Messe Frankfurt, talking of Canada’s first National Day for Truth and Reconciliation, observed on September 30 following the summer’s new discoveries of mass graves of children once dispatched to the nation’s “Indian Residential Schools” and lost to decades of institutionalized atrocities.

May Simon didn’t mention that she, in fact, was likely spared being sent to one of these abusive schools because she’s the daughter of a white father and Inuk mother. That mixed heritage meant she wasn’t allowed to attend a residential school, and she was home-schooled instead.

Talking of legends told to her by her Inuit grandmother—her favorite tales were about Sedna, ruler of the Inuit underworld and the creation of “seals, walruses, and other sea mammals”—May Simon said, “Through my own story, I learned to navigate two very different worlds. I learned to find my voice and to be a strong voice for others still struggling to be heard. I learned that our stories connect us and give us strength.”

And her very presence as the federal viceregal representative of the Canadian monarch, currently Queen Elizabeth II, made the Canadian guest of honor program’s theme—Singular Plurality: Singulier Pluriel—entirely resonant for the more than 80 international book markets represented this week at Frankfurt.

“We are a multicultural nation,” she said.

“This is more than just a fact. It is part of our identity. That spirit comes alive in Canadian literature, which is bursting with new voices and unique perspectives that are all a part of the diverse backgrounds that represent Canada.”

And before she and the opening ceremony assembly had moved to the Canadian pavilion in Messe Frankfurt’s sprawling Forum to see its stylized evocation of Canada’s lands and spirit, May Simon had cinched for her audience the grace of responsibility that rests on the literary arts and industry today. 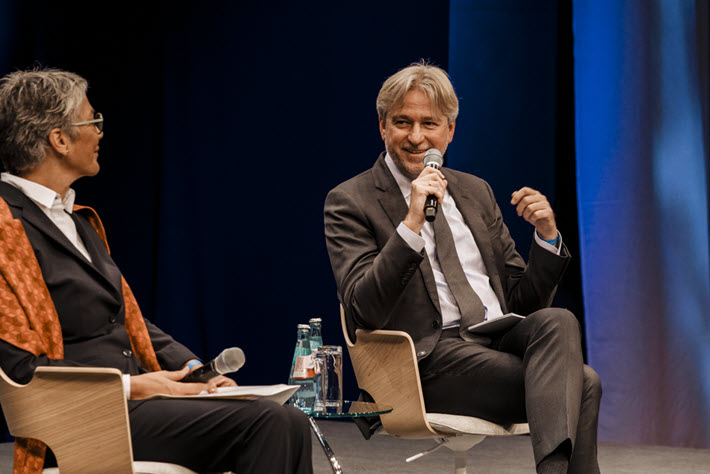 A fortunate business, as the Börsenverein des Deutschen Buchhandels‘ Karin Schmidt-Friderichs reminded the news media earlier in the day, book publishing has had an uneven struggle during the pandemic—some regions less able to weather its assault than others. But on the whole, books have shown new resilience, the solace and sustenance of their storytelling providing a service to so many during the darkest hours of a long viral night.

Nevertheless, Schmidt-Friderichs reminded the opening ceremony audience that German publishers are deeply concerned about ebooks, their potential revenue, and how it’s impacted by lending libraries.

And Frankfurt Book Fair president and CEO Juergen Boos found himself at the earlier press conference asked, once again, about the policy of many book fairs today of allowing even far-right politically based publishing interests to be exhibitors. The world of books, Boos reiterated, cannot in good faith shut down and shut out viewpoints that aren’t welcome to the majority.

That plurality of the art and the vocation is either there or it’s not, Boos was saying. And he was saying it through a battery of simultaneous translation in five languages.

Boos has spent much of the pandemic pressing his nation and the world industry to affirm the essential social value of publishing’s international development and the great gatherings like Buchmesse that animate its professionals. None of what it took to open a physical iteration of Frankfurter Buchmesse on Tuesday has been easy.

Grütters: ‘Even When National Borders Were Closed’ 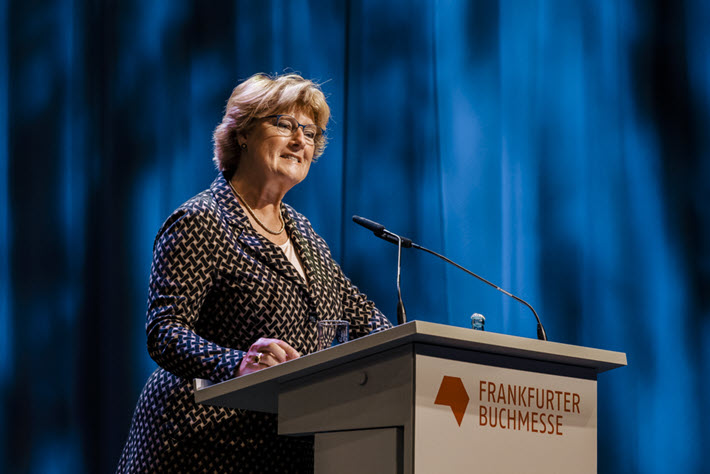 One of Boos’ most faithful compatriots in the effort is Monika Grütters, Germany’s minister of state for culture and the media and an avid proponent of Germany’s billion-euro Neustart Kultur program. In her comments, Grütters thanked the artists and business people of literature “for keeping the industry alive” and “largely unscathed” during the challenges of the pandemic.

She made a special mention of her gratitude to literary translators, “who enabled us to exchange thoughts and ideas across frontiers, even when national borders were closed.”

And as Margaret Atwood in Canada and Joséphine Bacon in France encountered technical difficulties in addressing the ceremony digitally, we were reminded that physically crossing those borders Grütters mentioned is still the gold standard in an industry like publishing in which interpersonal camaraderie and commerce are so crucial.

Mary May Simon quoted the late Richard Wagamese, an Ojibwe author and journalist of the Wabaseemoong Independent Nations, who said, “All that we are is story. It is what we arrive with. It is all we leave behind.”

And it’s clear this week that Frankfurter Buchmesse’s return to an in-person marks a new commitment by the industry to its art’s power to change the world, as May Simon said, “one story at a time.” 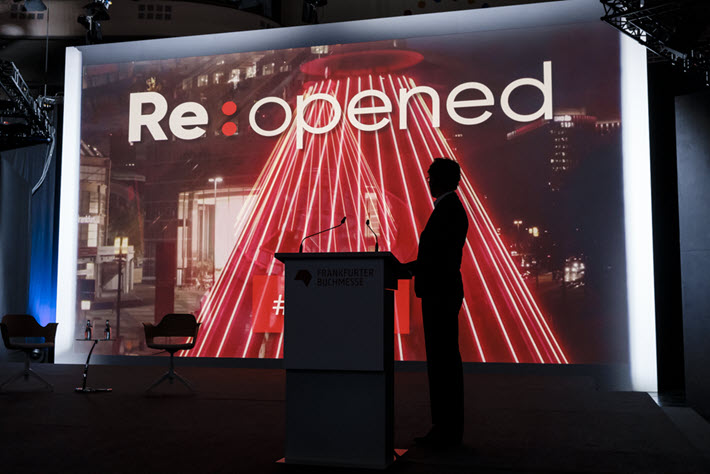 The Börsenverein’s Karin Schmidt-Friderichs, in silhouette, gavels into session the 73rd Frankfurter Buchmesse, declaring it ‘reopened’ after being rendered all-digital last year in the pandemic. Image: FBM, Marc Jacquemin

More from Publishing Perspectives on Frankfurter Buchmesse is here  and see our special highlights page for events to consider. More from us on Canada among international book markets is here, and more on diversity and multiculturalism is here.