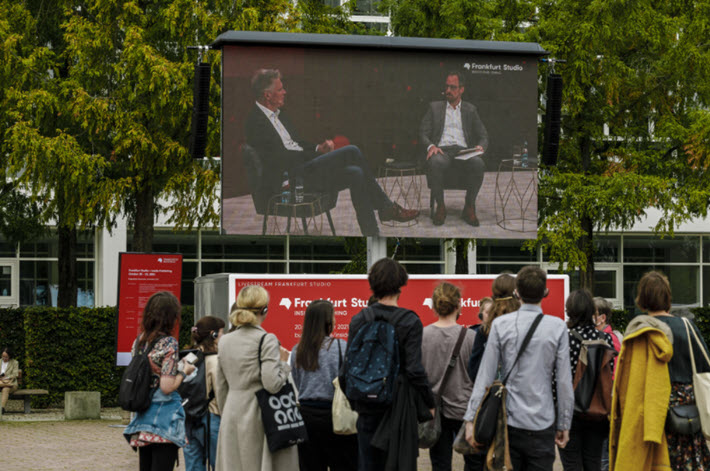 The 2021 Frankfurt Book Fair drew a strong in-person roster of visitors and originated new content for both on-site and digital engagement. 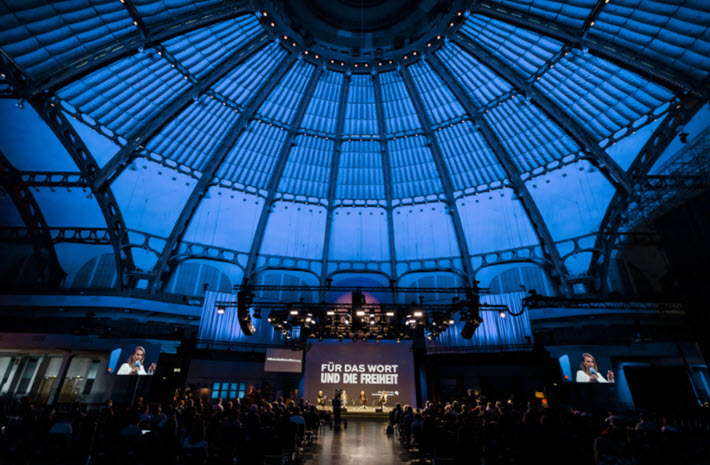 On the ARD Book Festival Stage in the Messe Frankfurt Festhalle, a Frankfurter Buchmesse discussion of freedom of expression. Image: FBM, Marc Jacquemin

With 36,000 trade visitors from 105 countries and 37,500 private visitors during the public days of the show, Frankfurter Buchmesse has reported tonight (October 24) that a total 2.013 companies from 80 countries were exhibiting (including those with stands, those in the Literary Agents and Scouts Center, and those using the new “workstations” option).

Logistically, financially, and philosophically, the 73rd Frankfurt Book Fair was difficult to produce in many ways and required a bold, cooperative move from its administrative team as well as from the German federal and Hesse state governments that supported it.

Many trade visitors traveled extensively to engage in person, as others took advantage of the world’s largest book publishing trade show’s digital offerings, as well. 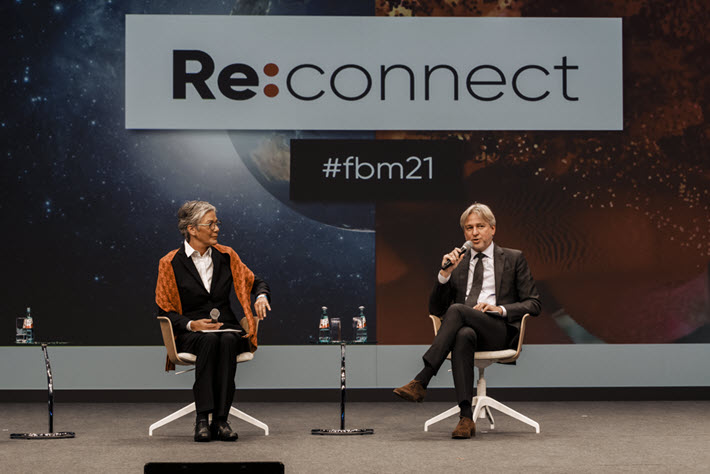 “After 18 months,” said Frankfurter Buchmesse president and CEO Juergen Boos, the trade show “represented a new start and, considering the travel restrictions in place around the world, it far exceeded our expectations.

“It just shows how resilient and creative our industry is,” he said. “Many exhibitors and trade visitors expressed satisfaction at the quality of their interactions. And thanks to our digital program for professionals, we were able to build a bridge to participants who were unable to travel this year.”

Boos’ reference to the digital program includes both the October 11 and 12 Frankfurt Conference programming and the premiere of Frankfurt Studio: Inside Publishing, a series of 27 sessions of content originated in a new 500-square-meter production facility in Hall 4 and curated by Publishing Perspectives for the B2B constituency that stands at the heart of Frankfurt Book Fair.

Viewers of the new Frankfurt Studio programming on the screen in the Agora at Frankfurter Buchmesse. Image: FBM, Marc Jacquemin

The Frankfurt Studio program drew more than 15,500 views from users in 97 countries on the Frankfurt Book Fair buchmesse.de site alone, with figures from outlying platforms (Facebook, YouTube, etc.) not yet included. In addition, trade visitors on-site at Messe Frankfurt were able to watch the programming on a large screen in the Agora at the center of the fairgrounds. The content is to be made available in November at Buchmesse’s online media center.

Including other offerings on the site, the digital programming—including a new “Masterclass” series of events—saw an overall 130,000 users engaging, and that figure includes the broader public audience that took advantage of the weekend programming from the new production unit, Frankfurt Studio: Festival.

By midday Sunday, the “festival” programming for the public had been viewed more than 5,200 times, and a stalwart audience in a chilly Agora watched as S. Fischer Verlage author Antje Rávik Strubel and the house’s publisher and president Siv Bublitz discussed Strubel’s win of the German Book Prize for Blaue Frau.

Meanwhile, the in-person BookFest events held at venues around the city of Frankfurt totaled 85.5 hours of programming for book fans.

Schmidt-Friderichs: ‘The Feeling of Optimism’ 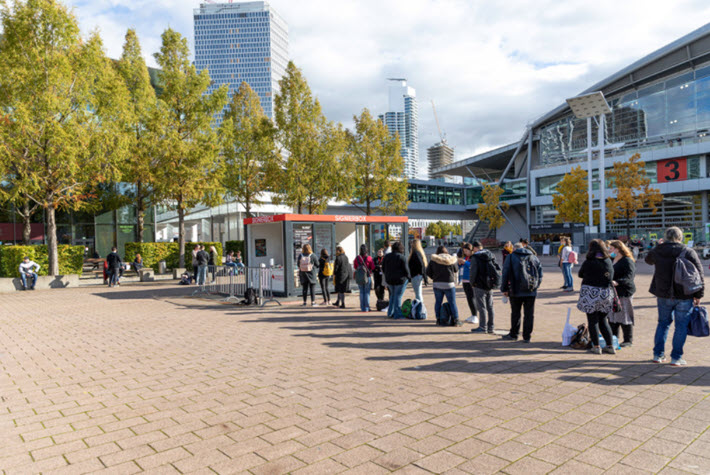 “The joy of seeing people once again,” said Karin Schmidt-Friderichs, chair of the Börsenverein des Deutschen Buchhandels, Germany’s publishers and booksellers association, “and the feeling of optimism were what made this year’s book fair special.

“The industry has emerged from the pandemic stronger than before and it used its time at the fair to engage in in-person interactions, exchange ideas on important industry topics and make new business contacts.

“Supported by a wide range of digital offerings, books were given a highly visible platform. In turbulent times, important social topics were also on the agenda. It thus also became evident that there are social issues which we have to—and will continue to—debate intensively, such as combatting racism and how to respond to extreme political positions in society and at book fairs.” 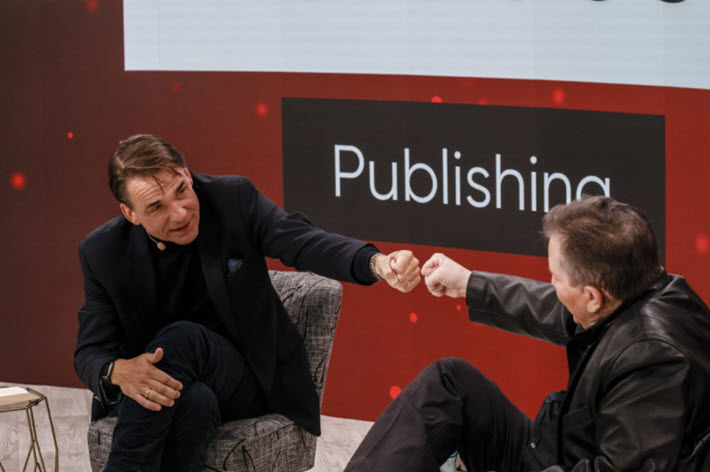 “We know from psychology,” Dohle said, “that immersing yourself into complex stories—particularly into complex characters—helps you to put yourself into other people’s shoes. It helps you to actually see the world from other points of view, and we know it creates empathy and human values, especially in young people.

“That’s what the world needs right now if we want to help defend our democracy, based on human values … We can make a good contribution to help our democracy, as we’ve enjoyed it for the last 75 years after World War II, to survive.” 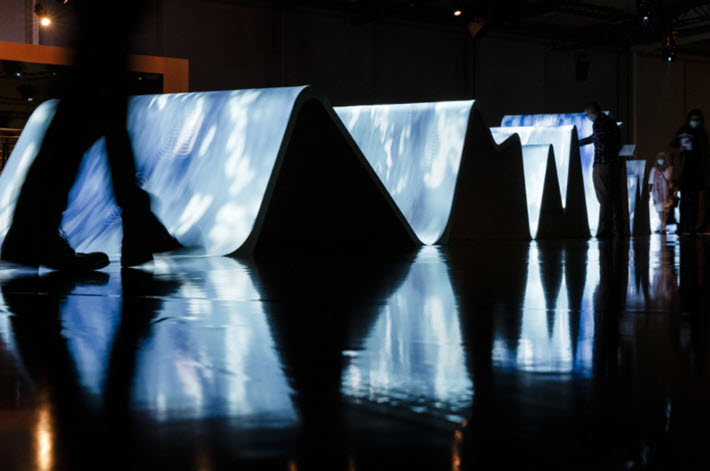 Inside the Guest of Honor Canada pavilion in the Forum at Frankfurter Buchmesse. Image: FBM, Marc Jacquemin

With eight authors traveling to Frankfurt and some 52 writers and illustrators taking part digitally, the two-year Guest of Honor Canada program featured a stylized evocation of the Canadian landscape in Messe Frankfurt’s Forum building, and a display of nearly 400 new titles on Canada from 165 publishers.

Sunday’s traditional handover ceremony passed the guest of honor mantel to Spain for its 2022 turn in the spotlight.

Further coverage of the singular 2021 Frankfurt Book Fair is ahead from Publishing Perspectives. The dates of the 2022 Buchmesse are October 19 to 23.

More from Publishing Perspectives on Frankfurter Buchmesse is here and more on the German market in the international arena is here.