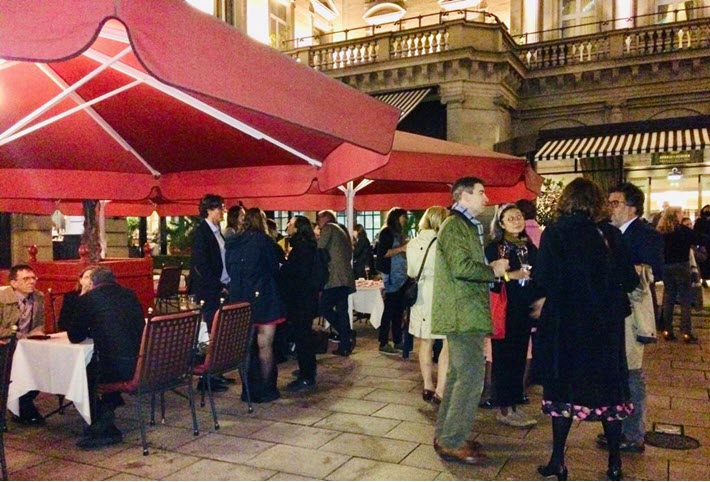 Trade visitors and exhibitors at Frankfurter Buchmesse spoke of the importance of supporting trade shows and doing business in person.

At the Steigenberger Frankfurter Hof. Image: Provided by Anne-Solange Noble

Editor’s note: The numbers from the Frankfurt Book Fair administration are surprising some industry players, the full contingent of attendees in this second pandemic year totaling 73,500 from 105 countries. We have more on the early data points here. —Porter Anderson

‘That’s How We Do Business Best, at Fairs’

This year’s Frankfurter Buchmesse seemed to glow when the tall, lanky, Christopher MacLehose strolled down its aisles. The 81-year-old British publisher was in Frankfurt to tell his colleagues about his new publishing house, Mountain Leopard Press which he launched as an imprint of Welbeck Publishing Group in March.

“Weeks and months from now,” MacLehose said, “the people who were not here will learn from those who were.”

MacLehose was referring to Hall 6.0, where the stands from the large United Kingdom and United States publishing houses were noticeably absent.

“Where are the Americans?” he asked. “How many English have I seen? I think they could have sent at least three energetic editors each.”

The 2,013 exhibitors present from 80 countries this year numbered well below an average year’s presence, but this was expected, of course, and many who traveled to be part of the 73rd iteration of the trade show were well pleased.

Noble: ‘Frankfurt Is All of Us’ 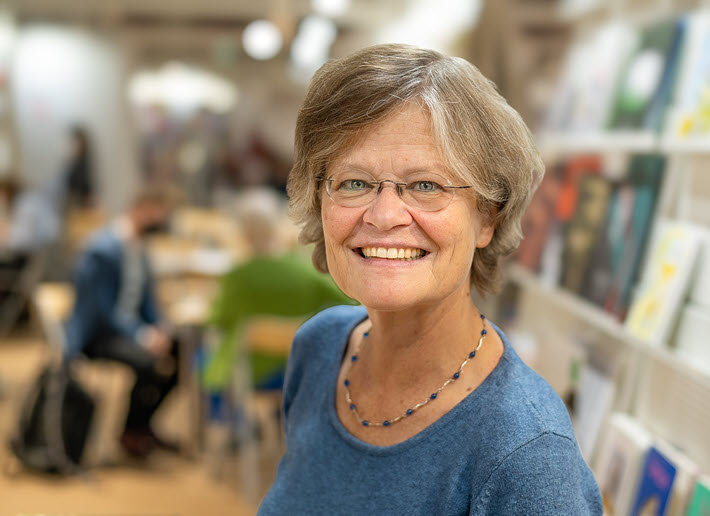 In September, Gallimard’s Anne-Solange Noble, who sells rights for adult fiction and nonfiction to English-language markets, sent an email to her British colleagues, encouraging them to come to Frankfurt. This was Noble’s 36th Buchmesse, and for her, she said, “All of us are Frankfurt, and Frankfurt is all of us.”

When she ran into Jacques Testart from Fitzcarraldo Editions at the Steigenberger Frankfurter Hof, he told her that her email had encouraged him to come, and that he, in turn, had encouraged Kishani Widyaratna, editorial director at 4th Estate to come.

As it turns out, it was Widyaratna’s first time in Frankfurt. “It was great to be there and make connections with European publishers after nearly two years of the pandemic,” she said, “a time in which so much of what we do has felt constrained and necessarily more local in focus.

“It may have been a much quieter fair than usual, but it still felt energizing and I look forward to returning next year when hopefully it will be in full swing.”

MacLehose: ‘Didn’t Regret It One Instant’ 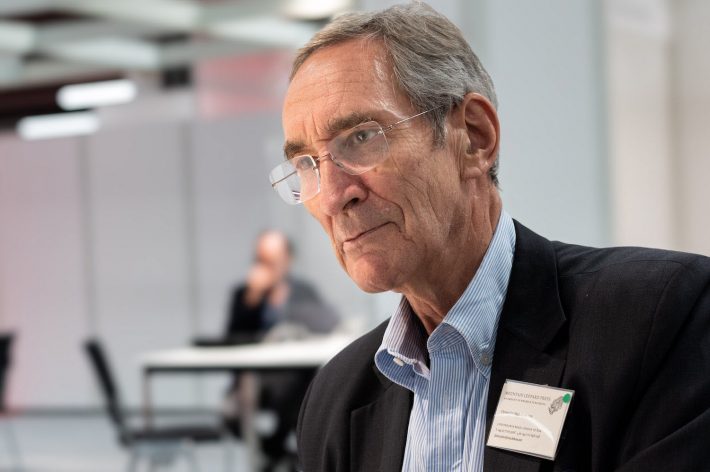 MacLehose said he’d had a full three days’ work and “didn’t regret it one instant.

“I long to be with people,” he said. “There’s a key part of publishing life, which is spending time with people who have become over the years your great friends. I doubt any industry is as collegial as the publishing industry.”

Noble echoed MacLehose, saying “Coming to Frankfurt I needed to reconnect. I was so happy to see my friends.

“The proof of my enthusiasm is that since there were so few people from the Anglo-Saxon world, I’d have had a good excuse not to come. My appointments were limited to the handful of English-speaking editors, but I also came for the drinks at the Frankfurter Hof. A big part of the job is the unexpected meetings.”

New Vessel Press co-founder, Michael Z. Wise tweeted on the first day of the fair that as one of the few Americans present, he’d been given a particularly warm welcome.

Being one of a handful of Americans at this year's Frankfurt Book Fair means a particularly warm welcome for New Vessel Press in meetings with publishers and literary agents from around the world. @Book_Fair #fbm21 #translation pic.twitter.com/DEKt2xNMB0

Wise: ‘It’s Important To Show Up’

“We really wanted to send a signal by coming here,” Wise said, “that if you want these international fairs to take place and reap the pleasures and rewards, it’s important to show up.

“We built up relationships over the past decade from coming to these meetings and wanted to reconnect with people. But what I really like here are the spontaneous meetings and talking with like-minded publishers who are publishing in other languages.”

Wise said he thought the bigger houses “could have sent a few people. Business is built on personal relationships.”

Like most, he said he found Hall 6.0 quiet, and while he usually has 60 appointments, he’d had 35, “which was plenty. “I definitely saw a number of interesting things and have reached an agreement after making a preemptive offer.”

Wise said he was “absolutely happy” he came, but he missed the Mövenpick ice cream stand where during a “normal” fair he would get a pick-me-up toward the end of the day.

Falcone on France: ‘By Far the Liveliest of the Fair’ 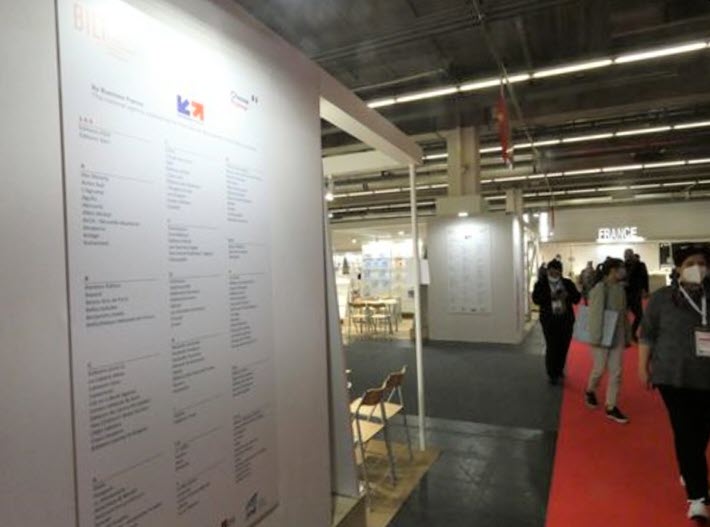 Hall 6.0 may have been quiet, but upstairs at the LitAg, the Literary Agents and Scouts’ Center, business was brisk, and Hall 4.1 felt positively buzzy, with the large French collective stand organized by the Bureau International de L’Édition Français (BIEF) spread over nearly 1,000 square meters for social distancing purposes, with more than 100 publishers present.

It prompted Feltrinelli Editore editor Fabio Muzi Falcone to say, “The French stand is by far the liveliest of the fair.

“You’d think the French were the only ones with a thriving market, when in fact all of us didn’t do so badly in view of the pandemic and could have made the same effort to be present, if only on collective stands like the French stand.

“It shows how internationally minded French publishers are. Good for them.”

Bortolussi: That’s How We Do Business Best, at Fairs’

The Italian stand close by had 34 publishers from the bigger houses, while independent publishers such as Edizioni E/O had individual stands. 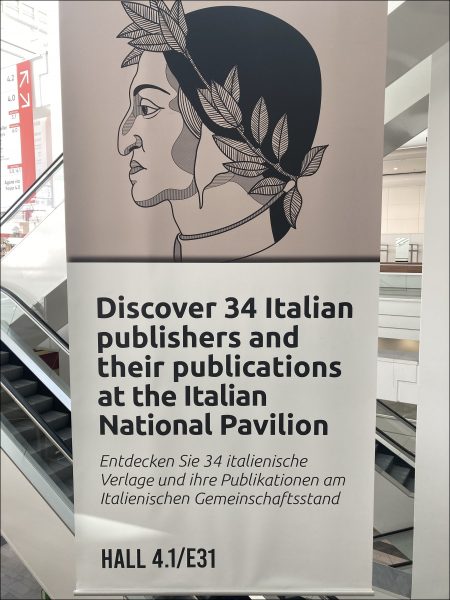 Giunti Editore, which usually has its own 100-square-meter stand, sent international foreign rights manager LeeAnn Bortolussi, who worked from a Frankfurt “workstation” in Hall 4.0.

Having made a last-minute decision to come, Bortolussi said she was pleased and had at least 10 appointments a day. “It’s always fruitful, and it was good because the people who came really wanted to be here. That’s how we do business best, at fairs.”

Seid and Sibila Serdarević of the Zagreb-based Fraktura said they had meetings every half-hour, “almost like usual.”

Seid Serdarević said, “We met lots of friends and editors. For me, most of the visitors were literary publishers and agents, which maybe shows us that for high-quality literature, it’s much more important to have a coming together and talk about the books because there’s more passion.

“To exchange and open new topics, talk about books, and present books that are usually not on bestseller lists, you really need to discuss this face-to-face with people.”

Barbara den Ouden, translation grants manager for fiction and graphic novels at the Nederlands letterenfonds, the Dutch Foundation for Literature, said that there was so much to catch up on with the people she saw again, “who had babies since the last Frankfurt book fair or sounded more confident because they’ve gotten a better position.

“Personally, and professionally,” den Ouden said, “it was good to have more time.

“On a personal level, I’m extremely happy. On a professional level too, because a big part of the job is bringing your personality to the meeting, and the way you read someone’s face. It’s more difficult on a zoom call.”

And Madrid-based author and translator Lawrence Schimel in a Facebook post on his return home wrote that the unplanned, serendipitous encounters he had, “are invaluable, and are one of the reasons it’s so important to be at the book fairs physically—and year after year.

“A chance encounter at one fair,” he wrote, “may lead to a meeting at the next fair, which in turn results in a contract or project, for you or someone you know. Or you run into them again at a later fair and the person they are with this time turns out to be someone who buys a book from you.

“Going to the fairs is not just about selling X number of titles at the fair itself, which means there often aren’t easy metrics for the corporate publishers to measure [whether] a fair was ‘successful’ or not.

“It was a smaller Buchmesse this year, in many ways, but an insanely productive one for me and I think for most of us who were there. It was so nice to be home again.”

More from Publishing Perspectives on Frankfurter Buchmesse is here. More from us on rights and rights trading in international publishing is here.