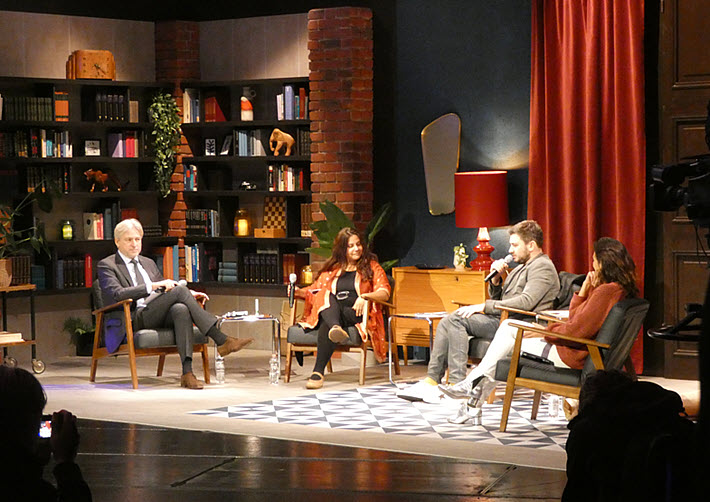 At the opening press conference for the 73rd Frankfurt Book Fair, organizers said that this special edition of the world’s largest publishing trade show is a testament to the industry. 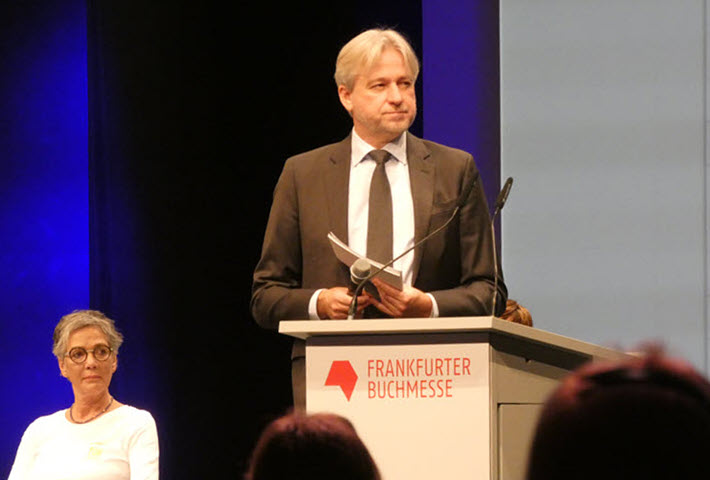 Frankfurter Buchmesse president and CEO Juergen Boos onstage at the opening press conference of the 73rd edition of the trade show, October 19. To his left is Karin Schmidt-Friderichs, head of the German Book Trade Association. Image: Porter Anderson

The book industry, “has gone through one of the biggest stress tests in history,” the Börsenverein des Deutschen Buchhandels‘ Karin Schmidt-Friderichs has told the Frankfurter Buchmesse annual opening press conference this morning (October 19).

“And it has come through in a very good way.”

The messaging from the organizers of the 73rd Frankfurt Book Fair states right up front that in this coronavirus COVID-19 pandemic year, the trade show is “back to business but not 9yet0 back to normal.

Journalists, just like the Frankfurt’s trade visitors, are required to order personalized daily tickets in advance, showing documentation to prove their status (vaccinated, verified recovery, or negative test results). Seating is fixed in place and marked for distancing. And all week, we’ll be reporting not only on the business and buzz of the fair but also on those adjustments, necessary for safety and committed to by all who attend.

Thomas Escritt at Reuters Berlin has reported on the German health minister Jens Spahn saying that special regulations related to the coronavirus pandemic could end on November 25, though many indoor test, vaccine and other hygiene measures would need to remain in place,” according to national media reports.

He calls that projected change a matter of going “from a state of emergency to a state of special caution,” which is not unlike how it feels to be at Buchmesse now.

“But basically it’s the connections with people that fill life with value,” Schmidt-Friderichs says. And “Re:Connecting,” as the show’s ubiquitous branding has it, is about the book fair as meaning “re-emergence, optimistic and full of drive.” 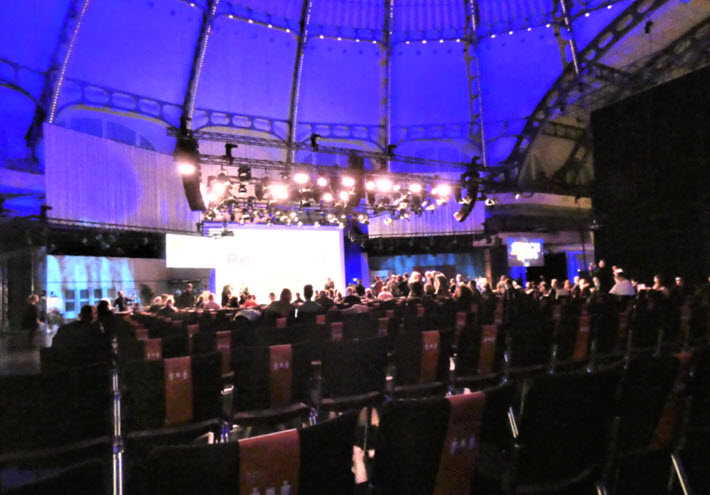 As has been extensively here at Publishing Perspectives and in other book business-focused news media, the resilience of booksellers who adjusted to e-commerce, publishers whose staffers adapted to working from home, and supply-chain heroes who kept distribution moving as effectively as possible, means, Schmidt-Friderichs says, a 25-percent increase reported by surveyed readers by GfK in Germany in terms of how often they use a book.

For Frankfurt president and CEO Juergen Boos, the special allowance for 25,000 people on the fairgrounds daily, the halls designed with wider aisles, the vaccination-verification protocols all have long been factored in as the price of doing the important business of the world’s largest trade show.

“This year, we have 2,000 exhibitors on the fairgrounds,” he told the press. “Three-hundred authors will travel here. More than 1,400 events will be held in the next few days. More than 60 of those events,” in fact, he said, “will be held on this stage.”

His reference was to the ARD television consortium stage set again this year in the soaring domed FestHalle at Messe Frankfurt. This morning, the interior of the structure was lavishly lit in a deep blue that picked out the mildly Victorian filigree of structural beams. The sense was almost that of being inside a gigantic gondola’s balloon, spirits lifting with the gleaming setting.

Some 1,900 news-media representatives have applied for their press credentials for the fair as of this morning, Boos said, “But let’s not delude ourselves. As our president [Schmidt-Friderichs] said, being back to business doesn’t mean being back to normal.

Boos referenced the difficulties of planning an in-person-plus-digital evocation of Frankfurt, “with a reduced team and in an uncertain pandemic situation. On top of this, access to this fair is more sophisticated” with the vaccination-or-recovered rule for entrance. And when in the halls, you have to wear a mask.”

Spaces inside those halls and at entrances will be much bigger, much wider, he said. “We have to avoid a crowd” and Buchmesse is required by the authorities to cordially but firmly break up crowds, should they gather in the interiors.

All this makes our work more difficult but is necessary to uphold the 73rd Frankfurt Book Fair and do it in safety. “And despite these difficulties, there are international trade visitors traveling here from more than 80 countries. This shows how important Frankfurt Book Fair is for the whole book industry,” he said, “and we’re going to witness a truly international book fair.”

Exhibitors will include, he said, publishers of young-adult books from Uruguay, Bali, Cameroon, Colombia, Bangladesh, and Kazakhstan. “And for most of them, this is the first time they will have come to Frankfurt.” These are small-press publishers on the fair’s long-running “Invitation Program,” which is sponsored by the German Foreign Office.

Despite shifting vaccination challenges, those publishers have arrived and will be in Hall 4.1.

‘We Need To Come Closer’ 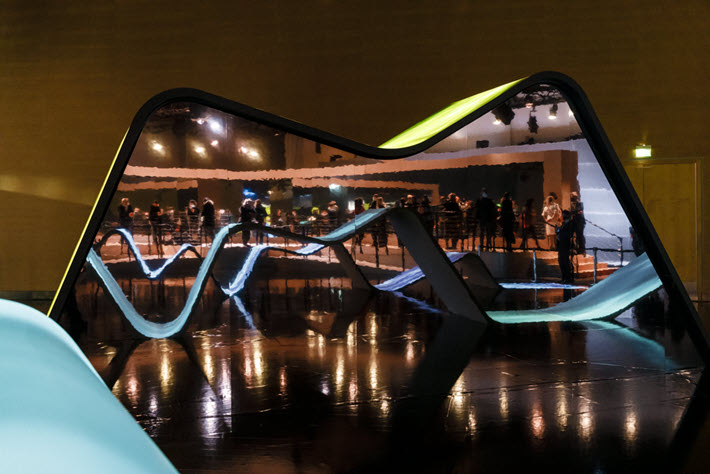 Inside the Guest of Honor Canada pavilion with stylized references to the Canadian land. Image: FBM, Marc Jacquemin

Guest of Honor Canada’s program—with its eerie, glowing stylized inspiration from the lands of ancestors in its guest of honor pavilion—will feature some 70 Canadian publishers, Boos said, both anglophone and francophone.

The digital component of the guest of honor program fields more than 60 authors, and eight are traveling physically here to join us all in Frankfurt.

“Freedom of speech, the opposition between huge groups and individual publishers, supply-chain woes” Boos said, “are some of the contemporary challenges the fair’s B2B programming will address, curated by the Publishing Perspectives initiative,” and opening on Wednesday (October 20) at 10 a.m. CEST / 08:00 GMT with an exclusive interview with Markus Dohle, worldwide CEO of Penguin Random House, a live in-person conversation with this journalist inaugurating the all-new Frankfurt Studio media production facility and streamed live online for the world audience.

“We’ve learned during the pandemic,” Boos said, “that we need to come closer together, we need to cooperate” with partners even to produce such pivotal in-person-and-digital events in the life of world publishing.

A library set build into the FestHalle ARD Festival Stage design was the scene for a discussion of issues in publishing during the Frankfurter Buchmesse opening press conference. From left are Juergen Boos, and Mithu Sanyal. Image: Porter Anderson

More from Publishing Perspectives on Frankfurter Buchmesse is here  and see our special highlights page for events to consider.