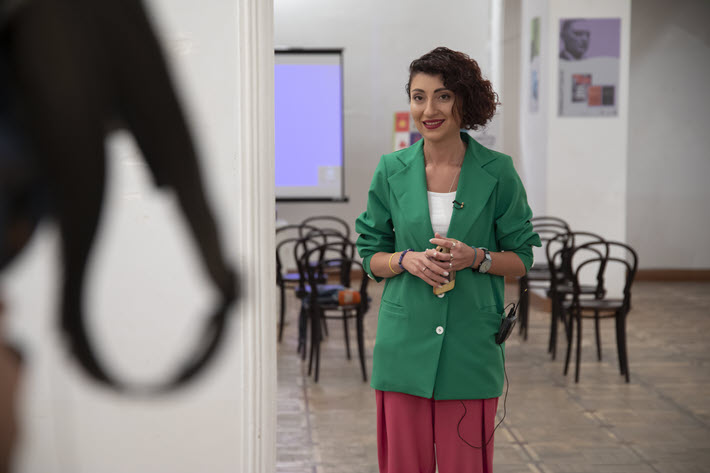 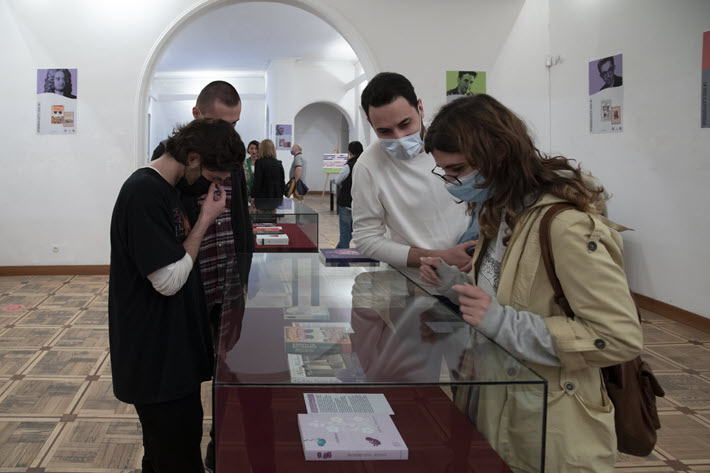 At this week’s ‘Untamed Books’ exhibition in Tbilisi, a post-Soviet survey of censored works in Georgia. Image: Intelekti

Orwell and Steinbeck, Kazantzakis and Bakradze

Here at Publishing Perspectives, we look frequently at the freedom to publish and its challenges—the publishing industry’s evocation of freedom of expression. 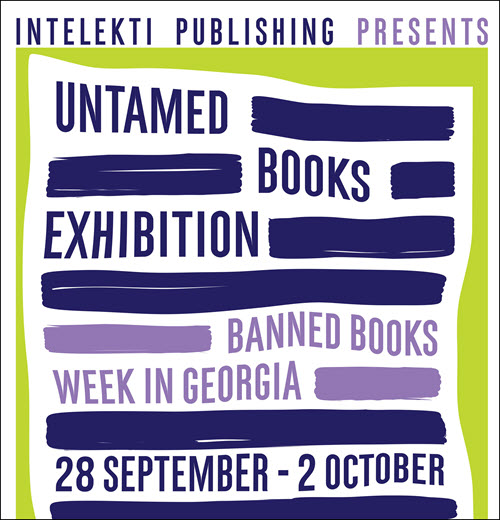 The consumer-side reflection of this, of course, is the freedom to read. And since 1982, Banned Books Week has usually been observed near the end of September, a program devised to highlight and focus on the freedom to read what one chooses: “free and open access to information.”

In many instances, observances honor books that have been banned at times by a range of authorities and in myriad settings. On Monday (September 27), for example, the staff of USA Today produced a series of defenses of 30 books banned at times, ironically quite often in educational arenas. They include The Curious Incident of the Dog in the Night-Time by the English author Mark Haddon, who on Thursday (September 30) helped launch the Society of Authors’ new campaign calling for book-cover credit for translators.

The Democratic Republic of Georgia knows something about book bannings, of course, and in that former Soviet state, an exhibition called Untamed Books: Banned Books Week in Georgia is running through Saturday (October 2), hosted by two publishing houses, Intelekti and Artanuji. The site of the show is the Literature Museum in Tbilisi—the current UNESCO World Book Capital.

The museum has partnered with the publishers to produce the event, and as Frankfurter Buchmesse trade visitors will recall from the Guest of Honor Georgia pavilion in 2018, the Georgian alphabet in itself has become a symbol of independence and courage.

The show highlights some 50 books in Georgian or other languages, written—and banned—in a multitude of times, places, and political climates. Each book is presented with an explication of why it ran afoul of authorities. Among these works are:

Kristenn Einarsson, the longtime chair of the International Publishers Association’s (IPA) Freedom to Publish committee—which annually awards the Prix Voltaire for publishing valor in the face of conflict—delivered a video address to the opening ceremony. We’ll embed Einarsson’s video for you below, with a transcript of his comments in which he praised Untamed Books, saying, “It’s important that literature is not tamed by authorities.”

Gvantsa Jobava: ‘When Censors Controlled Everything’

It will surprise no one in Publishing Perspectives‘ international readership to learn that the organizer of Untamed Books is Gvantsa Jobava, a member of the IPA’s Freedom to Publish committee and one of Georgia’s and Europe’s most reliable activists for literature.

“One of the most dangerous models of censorship, self-censorship, is always dozing off somewhere on the sofa placed nearby us. At any time it can wake up.”Gvantsa Jobava

“We started celebrating Banned Books Week in Georgia in 2018,” she says, “as an initiative of the publishing houses Intelekti and Artanuji. This developed as a follow-up project to our publishing series Banned Books Shelf in which we collected and published absolutely amazing books from different periods and different territories of the world, books that were burned, banned, or challenged, because of the brilliant ideas about freedom, equality, and love they were spreading around.

“Our readers really loved those books, so we were inspired to do more to promote freedom of expression and freedom to publish in our country.

“Georgia’s Soviet history of the last century is full of stories about banned literature and punished writers. After the Soviet Union collapsed, the history of censorship left us and now we have a slight sense of relief because luckily it now belongs to our past, when the censors reviewed and controlled everything in any way associated with creativity and thinking: literature and writing, scientific papers, film, theater, and the visual arts.”

She recalls the so-called Mtavlit, the Authority of Literature and Publishing Houses, which had a special repository of banned or “improper and undesirable” publications were held. And she speaks of “when a lot of Georgian artists were arrested and shot, some were driven to suicide, some of them were officially declared insane.”

‘A Small Revenge For Our Soviet Past’ 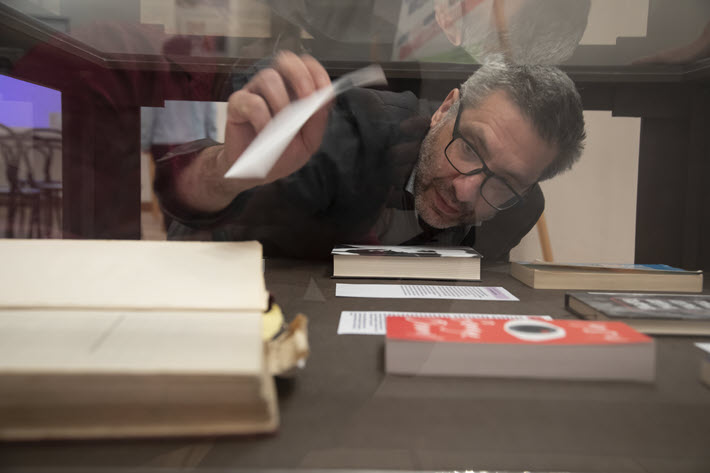 Lasha Bakradze, director of the Literature Museum in Tbilisi, works on a display in the ‘Untamed Books’ exhibition. Image: Intelekti

So much momentum for the “freedom to read” has been built up by the program in the States over the years that robust resistance often meets efforts in censorship, frequently repressive runs made by politically motivated parents at school boards and library systems. Timothy Bella at the Washington Post reported on September 25 about one Pennsylvania school board’s climb-down from what it euphemized as its “freeze” on “a lengthy list of books and educational resources that focused almost entirely on titles related to people of color.”

What Jobava recognizes, as do many in the international business today, is the often more insidious threat of self-censorship. In the simplest example, a school librarian, having seen the attacks on Central York High School’s educators for including children’s books about Rosa Parks and Martin Luther King Jr., can be led to self-censor a library’s collection, fearing similar right-wing backlash.

“Even now,” Jobava says, “when the Soviet dictatorship has already had its logical end and we’re facing an absolutely different new era, doing our best to follow all the democratic values, one should realize that the censors—or maybe the latent censors—are still alive. They’re everywhere, all around the world. In any authority and any time they can become stronger and more powerful.

“We should also always remember that one of the most dangerous models of censorship, self-censorship,” she says, “is always dozing off somewhere on the sofa placed nearby us. At any time it can wake up.

“So publicly speaking about the dangerous outcomes of censorship is always timely and even necessary all around the world, including here in our country, where especially during last few years, because of our complicated political situation, our journalists and the free media have often come under attack. This unpleasant and even dangerous signal gives us a reason to defend our freedom of expression and to discuss it as an issue of a great importance.”

Jobava says, “I can say that the Untamed Books exhibition is a small revenge for our Soviet past, but it’s also a tiny attempt to contribute to building our free and independent future.” 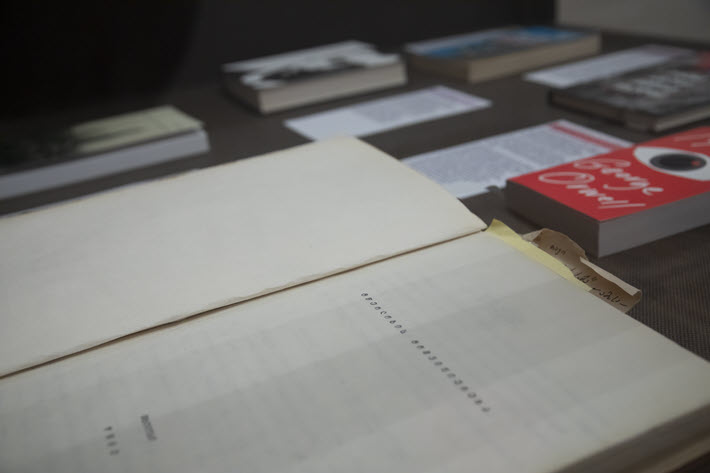 On display in the ‘Untamed Books’ exhibition in Tbilisi. Image: Intelekti

In his comments on the opening of Untamed Books in Tbilisi (video below), Kristenn Einarsson says, “Banned Books Week is a very important tool in the work to promote the freedom to publish. I therefore salute you on your celebration in Georgia. 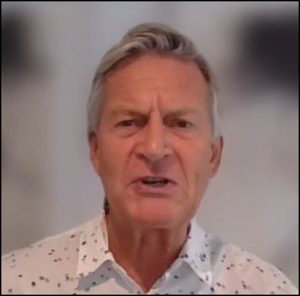 “Freedom to publish means that publishers must be allowed to publish all that they deem worthy of publication, even, and perhaps especially, if those works challenge the boundaries established by the society they operate in.

“The conditions governing and restricting freedom to publish vary around the world. In some places, it’s governments and state regimes that prevent the publication of material or works deemed to be ‘dangerous’ or ‘inappropriate.’ In other cases, there are pressure groups–religious, social, commercial–trying to prevent publication of certain information.

“Even in countries with few regulations on freedom to publish, publishers might have to consider the negative consequences of producing and distributing certain content. This all adds up to publishing being a challenging but rewarding task.

“When a society has reached an acceptable level of freedom of expression, we know that there’s a continues struggle to ensure those conditions aren’t changed.

“Banned Books Week reminds us of the necessity to fight every day for the right to be able to publish the work of authors that should be available to all the readers, readers who want to engage in the enlightened task of reading freely.

“It’s important that literature is not tamed by authorities. I wish you all the best with your exhibition and the campaign to ensure the freedom to publish in your beautiful country. I hope to see you soon again.”

Here is Einarsson’s statement, in English: