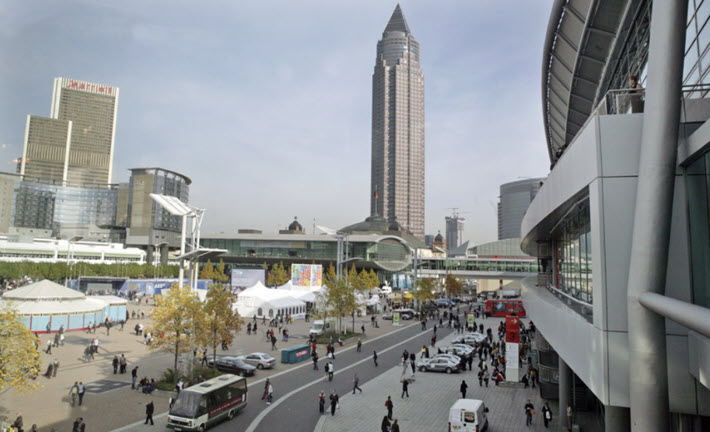 The annual Frankfurter Buchmesse gathering of the European Federation of Publishers is set for October 21 at midday.

A view of the Messe Frankfurt Agora during setup for the 2008 Frankfurter Buchmesse. Image: FBM, Alexander Heimann

ContentShift and Renew the Book Winners

A Frankfurter Buchmesse tradition, the Federation of European Publishers‘ “Rendez-Vous” event in Frankfurt was supplanted last year by the coronavirus COVID-19 pandemic, of course.

This year, according to overnight press messaging from the Brussels-based organization, the event will return in person at Frankfurt Book Fair in the Messe Frankfurt Congress Center’s Harmonie Room (Section D and E). A ground plan of this year’s use of the fairgrounds is here.

During the program, the organization is expected to present some European book industry 2020 statistics, a preview of a more extensive report to be produced later.

Another element of the program will be the federation’s signing of the International Publishers Association’s (IPA) “Inspire” charter, the new cooperative effort introduced in our story on September 20 here and discussed on Monday (October 18) by IPA president Bodour Al Qasimi and Frankfurt president and CEO Juergen Boos in a networking session in “The Hof” series.

The commitment of the federation’s 29 national publishers’ associations for books, scholarly journals, and educational content in Europe is an important one, not only to the IPA’s work, of course, but also to the efficacy of the new “Inspire” effort to raise the viability and outlook of world publishing in what we all look forward to as a post-pandemic world.

Federation president Peter Kraus vom Cleff will sign the Inspire cooperative commitment at the event on Thursday, having been invited to do this, the federation says, at Al Qasimi’s invitation.

In its media messaging the organization today says, “From the first days of the COVID-19 crisis until today, FEP has stood with its members to support them and exchange best practices. FEP has also produced two reports which were helpful to many members to convince their governments of the necessity to actively support the book sector during this difficult period.”

Vom Cleff is quoted, saying, “Publishing is a key industry for maintaining and strengthening Europe’s competitiveness and individual fulfilment. Our industry needs a fair framework and freedom of expression to continue to play this role.”

The program on Thursday is also devised to give a platform to winners of two competitions.

One is the €50,000 (US$58,247) Renew the Book competition, won this year by the Immer App which claims to “understand you and helps you read the way you want.” You’ll remember we covered the program, produced by the General Publishers Group in the Netherlands here, when its winner was announced on April 5.

An interesting throwback to startups of years ago, the Immer system does what we once called “chunking”—breaking the text of a book into small sections of “pleasantly readable portions”—and it offers books in what the company calls “stacks.”

The result, according to descriptive material on the program’s site, is the chance to “calmly choose your ideal book” and then various assists in “actually finishing the book.”

The program is also designed, according to promotional copy, to present a user with “a kind of reading diary that helps you build a reading habit” and summaries of previous short reading sessions. And more functionality, called “flowing,” includes buying that book you’ve calmly chosen “with a smart script that learns from your reading behavior and choices.”

The second competition to be highlighted in Thursday’s federation programming is the ContentShift Accelerator from the Börsenverein des Deutschen Buchhandels—Germany’s Publishers and Booksellers Association—familiar to our readership from past coverage.

The federation points out that while winner of the ContentShift will demonstrate for the Rendez-Vous audience what they’re working on, that winner will be announced only shortly before the federation’s event, and so it’s not yet possible to announce who has won this three-month funded incubator program meant to support innovation and start-ups.

The federation reports that its attendance limit has been reached but that a video from the proceedings will be made available after it takes place.

More from Publishing Perspectives on the Federation of European Publishers is here. More on Frankfurter Buchmesse is here, more on the ContentShift program is here, and more on Renew the Book is here.