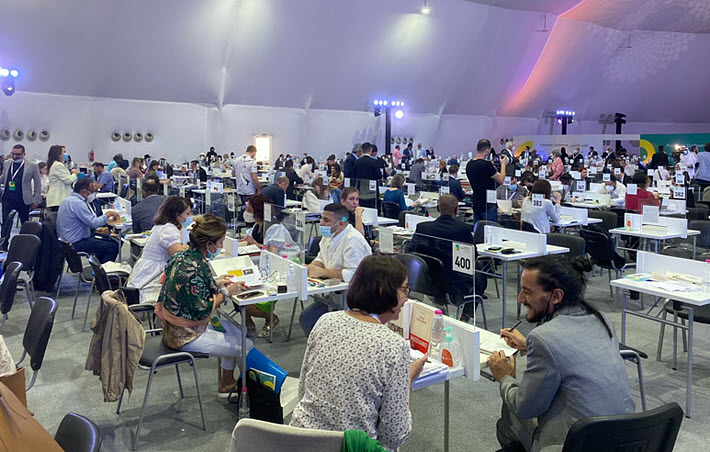 On October 31, the first day of the Sharjah Publishers’ Conference buzzes so happily that conference-goers had to turn up the volume on their translation headsets to hear over the hubbub. Image: SIBF/Midas, Jason Bartholomew

An ebullient Ahmed Al Ameri  has spent this morning (October 31) walking around his 5,000-square-meter tent here at the Sharjah Expo Centre, announcing with a grin under his mask that “For this year, Sharjah is Number 1.”

He’s talking about the turnout for his Sharjah International Book Fair professional program, which has drawn, he says, 548 registrants to its combination of industry presentations onstage and a large rights trading floor for rights directors, publishers, literary agents and scouts.

In most years, the Literary Agents and Scouts Centre (the “LitAg”) at Frankfurter Buchmesse constitutes the largest gathering of book publishing’s translation-rights trading activity in the world market. But this year, of course, pandemic constraints led to a smaller than usual cohort of trading professionals in Frankfurt’s center.

It’s also good to note that while Al Ameri is talking of being No. 1 with a wink, the Sharjah professional program is one of the most generous in the world, funding what the Book Authority tells us this year is the travel costs for as many as 150 of its professional program participants—no small factor in how many can take advantage of the benfits of being here.

The rights-trading professionals who arrived Sunday for the three-day conference’s opening didn’t want to wait for the planned afternoon “matchmaking” sessions with their rights counterparts.

As the conference sessions were getting underway, they were backed by a low roar of activity on the adjacent trading floor, a hearty sound of commerce underway.

Al Ameri: Publishing’s Place in the Drive for Sustainability 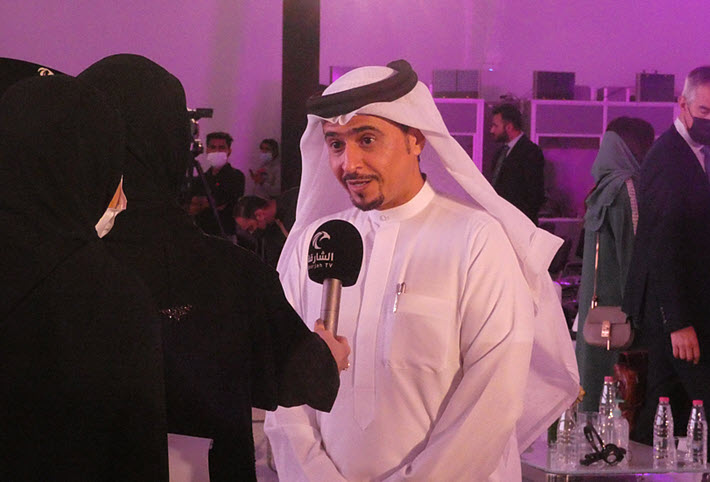 “They just didn’t want to wait,” Al Ameri told Publishing Perspectives. Offering a live demonstration of how many rights sellers and buyers have been waiting for a chance to get into these meetings again, the Sharjah show was an immediate hit with many of its rights attendees who found their tables, sat down, and got busy presenting their books all morning, even before the conference began.

Julie Attrill, Wiley’s UK-based rights and licensing account manager, told Publishing Perspectives that Sharjah’s trading center creates a particularly accessible environment. “I was just talking to some people from Syria,” she said. “You run into such a huge range of people here.”

Al Ameri, who was at Frankfurt last week with the stand from the  Sharjah Book Authority, which he chairs, opened the three-day conference this morning with a call for civic leaders and policy makers to include publishing among industries they’re gauging to measure progress in sustainability—especially pertinent today in climate-crisis terms, of course, as Glasgow’s COP26 opens, but also meant to refer to the sustainability framework that world publishing needs put into place to move forward amid upheavals in entertainment and lifestyles. 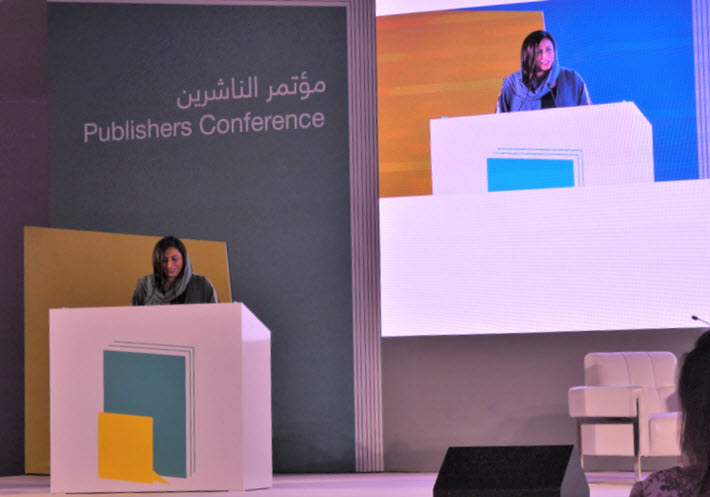 Bodour Al Qasimi, in her keynote address, brought her roadshow home, if you will, speaking as president of the International Publishers Association (IPA) after months of travel to markets in various parts of the world and extensive meetings—the leading edge of IPA’s effort to create a comprehensive picture of the effects of the coronavirus COVID-19 pandemic on book publishing at international scale.

“We are on the cusp of a new age in publishing in which our collective voices can come together to create a new dawn.”Bodour Al Qasimi, IPA

Bodour is the founding publisher of the Kalimat Group in Sharjah, and she has enormous respect from her fellow publishers and from the member-associations of IPA for her first-hand knowledge of the field and for her firm insistence on promoting diversity and inclusivity in publishing while developing a stronger context in which the world’s publishers can work together to protect and move forward their own needs.

“Resilience is part of our DNA,” Bodour said, stressing that the IPA’s “Inspire” initiative—it stands for “International Sustainable Publishing and Industry Resilience Charter—is meant to assess and embrace the challenges encountered in many markets, a no-publisher-left-behind effort to analyze and share responsibility for strengthening publishing and advancing its interests as the world, we all hope, gets better and better at staring down the contagion.

Another of Al Qasimi’s clear messages of the moment focuses on the wide disparity in how the pandemic’s challenges have impacted what she says are both “a trend toward digital distribution and consumption, and also the significant skills gap in our industry, which is why so many publishers faced challenges to cope with such rapid transformation.”

Working with partners including the World Intellectual Property Organization (WIPO), New York University (NYU) and Oxford Brookes University, the IPA is readying the opening of another new program called the IPA Academy, Al Qasimi said, “to help bridge the skills gap and to help our members adapt to rapidly changing readership and consumer behavior trends.”

And in a spirited appeal to the zeal of so many publishers in the audience, Al Qasimi said, “I believe we are on the cusp of a new age in publishing in which our collective voices can come together to create a new dawn.

“We will recover and re-emerge ready to face the world stronger, more focused, and most importantly, more united.”

Pansa: ‘What Is the Value of Culture at This Point? 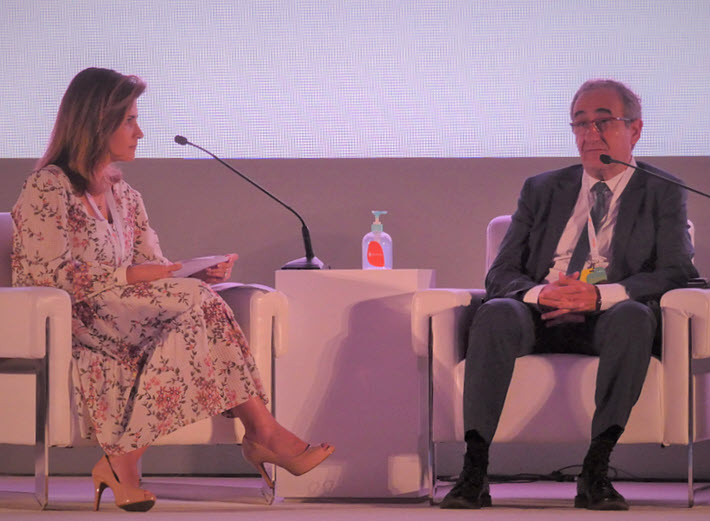 Al Qasimi’s conference keynote—delivered over that reassuring, rising clamor from the trading floor—was followed by IPA vice-president, Karine Pansa of Brazil and panelists who touched on many critical publishing issues in “Coming Together in Crisis.”

For example, she and Patrici Tixis, the acting president of the Spanish Federation of Publishers’ Guilds, were in agreement that threats to copyright laws must be watched and resisted with special dedication.

Digitization, Tixis noted, has come with new threats to copyright and new challenges to the public’s understanding of the value of literature and the framework that protects it for publishers and authors.”

Tixis classifies “the defense of copyright” as “the most important threat we have before us in the coming year. We have to agree that because we work in creativity, copyright is the main issue. We have to think that in the battle between the device and the content,” there may be many who see the device, the delivery system of digital content, as the most important.”

And setting up discussions to come in the remaining two days of Sharjah Publishers’ Conference, Pansa agree with Tixis, pointing out that for IPA, copyright is one of the organization’s three pillars of primary concern.

“What is the value of culture at this point?” she asked. “To be paid for what we do?” 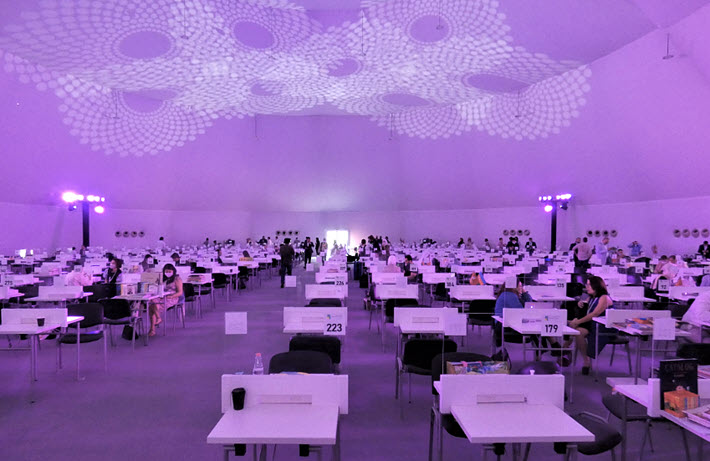