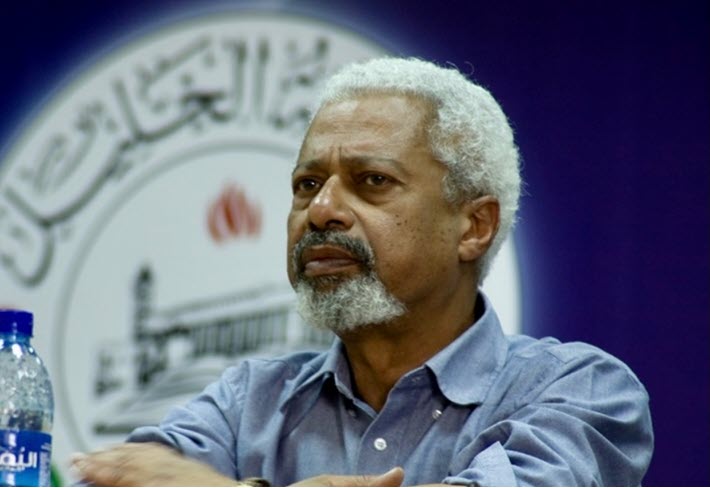 While the world publishing industry focuses on Frankfurter Buchmesse, the next major trade show, Sharjah International Book Fair, is ahead.

Abdulrazak Gurnah, speaking at Hebron in 2009. Image: Palestinian Festival of Literature, CC BY 2.0

SIBF at 40: ‘A Remarkable Cultural Milestone’

Abulrazak Gurnah, the Tanzanian novelist who won the 2021 Nobel Prize in Literature last week, will  is to appear in the 40th Sharjah International Book Fair, running November 3 to 13 in the United Arab Emirates.

Sharjah’s fair and trade show can draw as many as 2.5 million attendees and this year is being staged in a fully physical format with streaming of many events provided. Gurnah will be one of 85 local and international authors and other literary personalities engaged in the show.

Details of this year’s extensive book fair were laid out by Sharjah Book Authority chair Ahmed Al Ameri, who is also behind the new international “Into Books” reading campaign seen in world hubs including Paris, Riyadh, Cairo, and New York City.

On Wednesday (October 13,) Al Ameri was at the Sheikh Dr. Sultan Bin Mohammed Al Qasimi‘s still-new House of Wisdom learning hub, which was opened in 2020 as the emirate’s UNESCO World Book Capital year led by Bodour Al Qasimi came to an end. Many international publishing professionals have yet to see the House of Wisdom, because travel to Sharjah wasn’t possible for so many in the business at the time of its inauguration in the first April of the coronavirus COVID-19 pandemic. 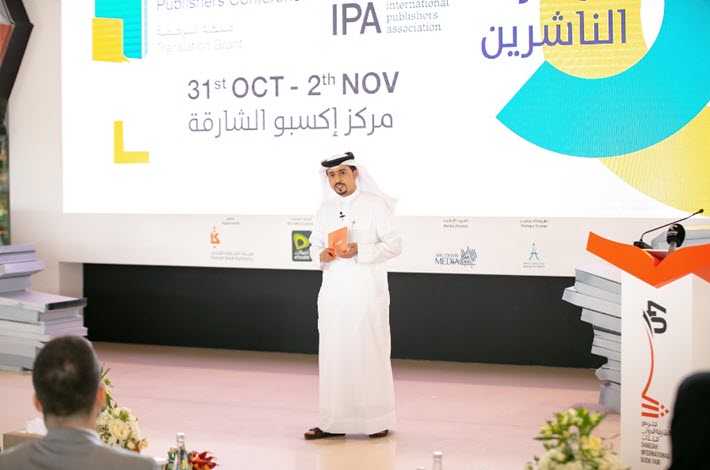 Sharjah Book Authority chair Ahmed Al Ameri at the House of Wisdom rollout event for this year’s 40th Sharjah International Book Fair: ‘Every achievement and every change we strive for starts in the pages of a book.’ Image: SIBF/WAM

Over the past 40 years, Al Ameri said in his presentation, the book fair has come to stand as a central symbol of the centricity of literature and reading devised for the emirate by Sheikh Sultan.

“The most important” element of the vision of Sharjah’s author-ruler, Al Ameri said, is that “every achievement and every change we strive for starts in the pages of a book; every discussion we begin and even the understanding of our history starts with a book.

“The 40th edition of SIBF is a remarkable cultural milestone for Sharjah and the UAE, through which we want to continue driving our efforts to promote the growth and post-pandemic recovery of the global publishing industry.

“SIBF 2021 will serve as a catalyst for new readers and a key player in transforming the industry to meet their needs. At the same time, the book fair will offer a platform for authors and researchers to broaden their areas of interest.”

Spain is guest of honor this year at Sharjah, and the Spanish ambassador to the UAE, Inigo de Palacio, joined Al Ameri at the announcement on Wednesday, saying, “Sharjah International Book Fair is the most relevant book fair in the Arab region. I’ve been informed that more than 77 countries participated in the 2019 edition, which welcomed more than 2 million visitors. This is outstanding. These numbers are a testimony to the cultural vision and leadership of His Highness, the Ruler of Sharjah.”

De Palacio thanked Sharjah for accepting LIBER Book Fair 2019 invitation to be guest of honor and said, “Spain is reciprocating Sharjah’s generosity by coming to SIBF 2021 as a guest of honor.”

In its plans for its guest of honor participation at Sharjah, de Palacio said, Madrid has included a visit to the emirate by the Spanish minister of culture and sports, said to be an inflection point in Emirati-Spanish cooperation.

“We’ll be proudly representing not just Spain, but also a community of more than 560 million people worldwide,” de Palacio said. And Spain’s delegation to the book fair is to include 431 guests with a panel discussion with Javier Gómez and Diego Avalos, screenwriters of the Netflix series La Casa de Papel (Money Heist), as well as illustrators, publishers, and authors in conversation about the prospects for translation between the Arabic and Spanish languages.

In his presentation of an outline of what lies ahead in the Sharjah show, Al Ameri said that its 40th edition will feature 929 Arab and 637 international publishers showcasing millions of books across its 10,000-square-meter exhibition floor. This year:

India is participating with 87 publishers, while 48 are coming in from the United States; 26 from Italy; 16 each from Canada and Brazil; 14 from Spain;  and 12 each from Mexico and France.

Al Ameri says that Gurnah’s appearance at the fair will be his first international event of this kind since winning the Nobel. More authors to be featured, Al Ameri said, include Chris Gardner; writer Yasmina Khadra; Amitav Ghosh; Chetan Bhagat; and the young inventor Gitanjali Rao from the States.

The Kuwaiti journalist and writer Taleb al-Revai is to be honored as cultural personality of the year in light of his contributions to Arab literature (novels, essays in literary criticism, and short stories). Of particular importance is his work in revitalizing the Gulf region’s literary life, organizers say, and building bridges between Arab and Western cultures for at least 30 years.

The “Illustrators Survival Corner,” a project in collaboration with Bologna Children’s Book Fair curated by Mimaster Illustrazione, will hold 3 hands-on workshops and master classes for aspiring illustrators, designers and art directors who will be taught to use image design and creativity tools. 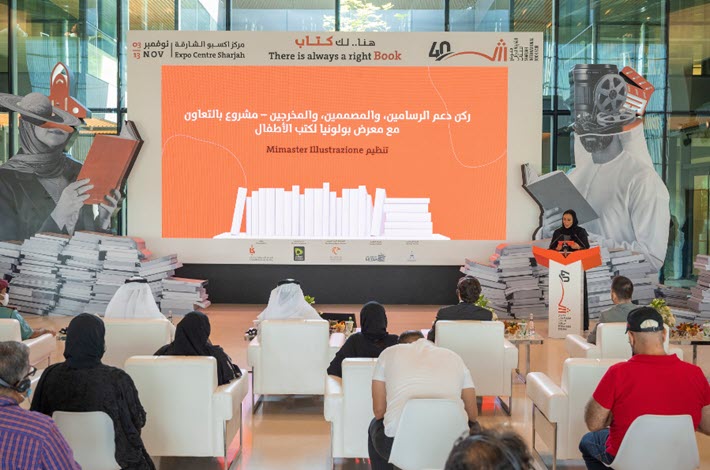 At the program presentation for the 2021 Sharjah International Book Fair, a workshop for illustrators is announced in association with Italy’s Bologna Children’s Book Fair. Image: SIBF/WAM

Set this year in the Expo Center, the program fields eight panels on key issues in world publishing at large as well as in the Arab cultures’ markets.

Participating publishers again get the chance to apply to the US$300,000 Sharjah International Book Fair translation grant program.

And as the professional program hands off to the 11-day fair itself, there will be 355 activities, shows, and workshops waiting for children alone this year, led  by professionals and specialists from nine countries. In addition, the fair is to feature an outdoor exhibition from Canada titled A Nomadic Heart and dedicated to celebrating the literary experiences of the Haitian-Canadian novelist Dany Laferrière and includes seven interactive shows based on three of his novels.

In addition to the professional program that precedes the opening of the exhibition floor, some 200 librarians and specialists from 20 countries along with 17 speakers from 10 countries will convene at the eighth edition of the Sharjah International Library Conference (SILC). Held in collaboration with the American Library Association (ALA) from November 9 to 11, the conference will take place in a hybrid format.

An international group of librarians and experts will lead the conference discussions, which will center around new trends and technologies, establishing collaborations and networks, enhancing leadership skills, and developing and promoting new services for their respective communities.

The longtime sponsor of the fair Etisalat was represented Wednesday by the CEO and northern Emirates general manager Abdul Aziz Hamad Taryam, who said, “This edition coincides with the 50th anniversary of the UAE’s formation and reinforces the nation’s aspirations to provide an environment that promotes our culture as well as leading cultural innovation.

“At Etisalat, we are honored to offer our patronage to the book fair once again.

“Our continued support to this key event reflects our commitment to promoting reading and holistic cultural development in the UAE society.” 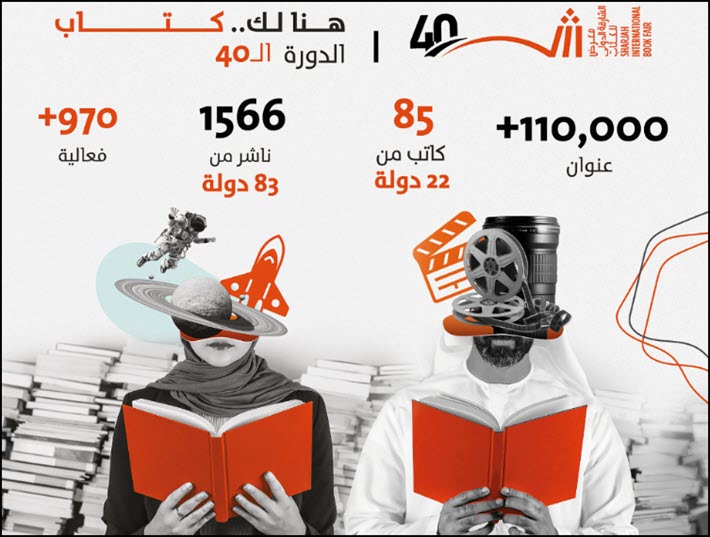