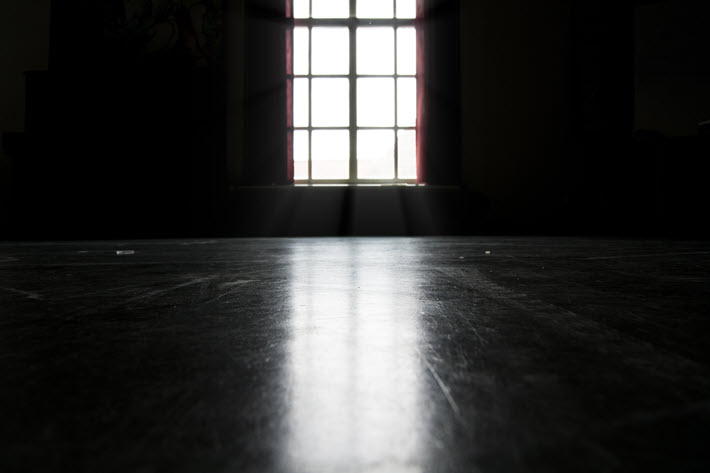 There may be clues in the metadata behind an apparent yearlong downturn in US thriller and suspense sales, even as women authors rise in the category.

Things are not always as mysterious as they seem. This is a window in the Cultureel Centrum De Schattelijn at Geertruidenberg in the Netherlands. Image – Getty iStockphoto: Rovanhal

Sleuthing for the Missing Six Percent

In a follow to Monday’s (August 30) update on the United States’ market, NPD BookScan’s research team has released a genre-specific look at the thriller and suspense category, finding that US sales have dropped six percent in the last year.

Thrillers and suspense are probably most popular in the United Kingdom’s market, where they reign at the top of the list, much as romance seems to do in the American market. But the category is a major one in the States, making its apparent trend toward a softening interesting.

NPD sees thrillers standing as one in eight adult fiction print and ebook buys in the American market.

To date this year, thrillers are the third largest-selling category, NPD Books reports, with unit sales for adult thrillers when combining print and ebook sales reaching 14.1 million units for the year-to-date through the end of May. But sales are down six percent in the past year.

Kristen McLean, NPD’s lead books analyst points to notable new thrillers released in 2021 and sees the category being “up slightly” over last year. However, she says it has  fallen behind the pace set by the rest of the adult fiction market, which has risen by 15 percent, in combined print and ebook formats through the end of May.

“As with Christmas books,” McLean says, “there’s always room for another great thriller on the shelf. It’s a core evergreen category that’s always ripe for new energy,” which might indicate there’s some concern for those in the business working the thriller/suspense category.

“In 2021,” she says, “the category has not kept up with overall fiction growth trends, but perhaps not for obvious reasons.”

Categorization May Be the Culprit 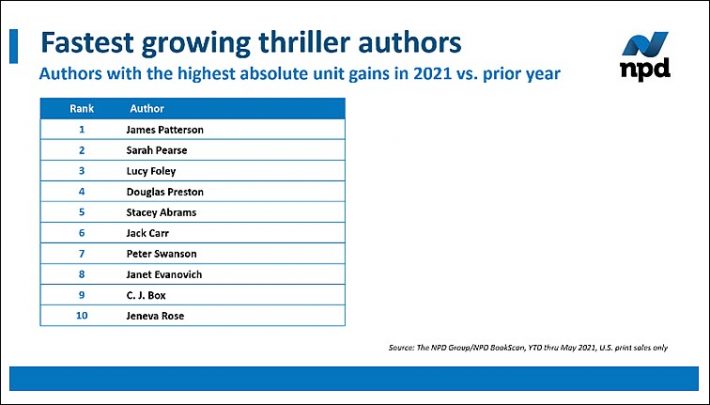 Source: The NPD Group/NPD BookScan year-to-date through May 2021, US print sales only

“Part of the declining growth in thrillers seems to be because of changes in consumer tastes,” McLean says–which could indeed be predictive of more weakening in the category. 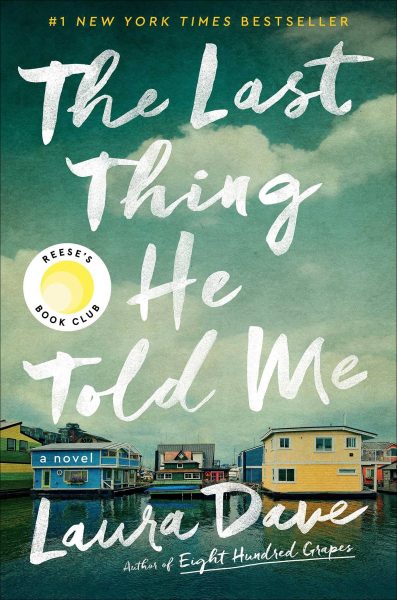 “But it’s also true that books that have traditional elements of thriller and suspense books are now being categorized in in other hot areas of the fiction market,” she says, “like women’s contemporary fiction, general fiction, and young adult fiction, where they’re driving growth.” That trend of thriller and suspense content going into other traditional categorizations might be what’s behind the downward pressure on the category.

As an example, McLean points to Laura Dave’s recent bestseller, The Last Thing He Told Me (Simon & Schuster, May 4), which is categorized as general fiction. At this writing, the book stands at No. 2 on the Amazon Charts’ most-read fiction side, its 17th week on the list.

McLean also points out that two of the four new thriller writers topping NPD’s growth list in the category are women. Suspense and thrillers have, in the past, been dominated by male authors in the States.

“The rising profile of women authors,” McLean says, “indicates that there may be a market for more female voices in this genre,” in the American field—which, of course, could be a key for international markets looking to find a foothold with translations sold into the US trade marketplace. 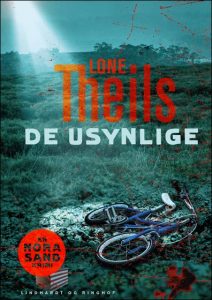 Our Rights Roundup series here at Publishing Perspectives frequently features thrillers and suspense work from many markets—the Nordics still hold a special pride of place in the noir field, of course—and female authors are overwhelmingly in the lead on those rights transaction reports we receive from literary agents and rights directors.

Our August 6 roundup, for example, featured Danish author Lone Theils’ De osynlige (The Invisibles) from Lindhardt & Ringhof in Copenhagen. Lena Stjernström at the  Grand Agency is reporting sales to Storyside in Finland, Cappelen Damm in Norway, and Storyside also in Sweden.

“There are good opportunities for reinvention in the category,” McLean says.

“After all, a down cycle is often the best time to invest in the next wave. There will always be a reader for the next great thriller.”