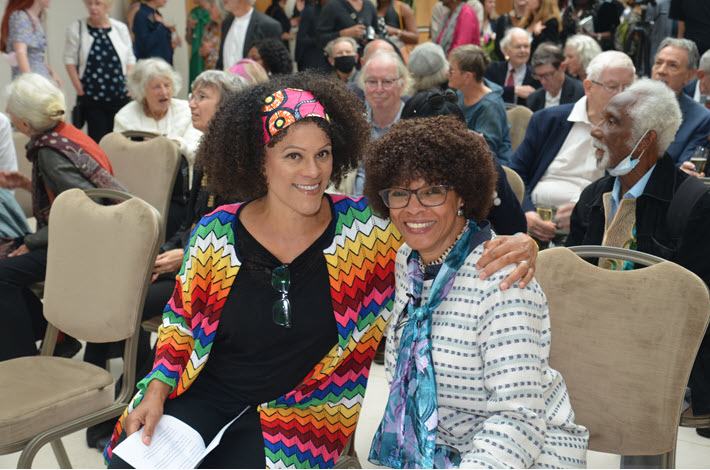 Voted one of the ‘100 Great Black Britons’ in 2020, Margaret Busby is fêted at London’s Hurlingham Club for her Lifetime Achievement International Excellence Award.

After an 18-month delay because of the coronavirus COVID-19 pandemic, the London Book Fair (LBF) was at last able to present its Lifetime Achievement Award in person to UK publisher, writer, editor and activist, Margaret Busby, at a well-attended party at Fulham’s exclusive Hurlingham Club—famed for its croquet lawns and grass tennis courts—hard by the Thames in west London.

Presenting the award, Booker Prize winner Bernardine Evaristo described Busby as “powerful, self-possessed and passionate,” and praised her for her two “ground-breaking anthologies,” Daughters of Africa and New Daughters of Africa.  ”

“She has long been a voice calling for change in the publishing industry and she was a founding member of Greater Access to Publishing in the ’80s.  She leaves a trail of honor and remains one of the nicest people on the literary scene.”

Hailed as the United Kingdom’s first Black publisher—she co-founded Allison & Busby with Clive Allison in 1967—Busby said that the three words she remembers learning as a child were not cat, sat and mat, but fascinating, necessary, and picturesque. “And that is exactly how my life in publishing now seems,” she said.

“What could be more picturesque than finding myself at the Hurlingham Club surrounded by so many beautiful, stylish, and irreplaceable colleagues, friends, and family?”Margaret Busby

“What could be more fascinating than the word of books? What is more necessary than helping to contribute to the enrichment of literary output? And what could be more picturesque than finding myself at the Hurlingham Club surrounded by so many beautiful, stylish, and irreplaceable colleagues, friends, and family?”

Born in Ghana and educated in the UK, Busby would go on to publish authors including Buchi Emmecheta, Nuruddin Farah, Rosa Guy, and CLR James.  She has received many honors, notably an OBE in 2006 and a CBE earlier this year.

The London Book Fair team decorated the Hurlingham’s Palm Court terrace with panels of quotes from industry figures. Agent Isobel Dixon said, “Her openness, curiosity, commitment to boundary-breaking writing, and her encouragement of others have remained an enduring beacon over many decades.” 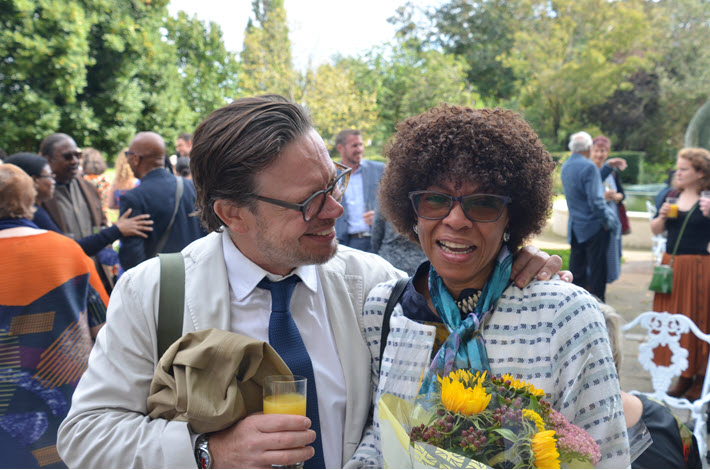 The party was in fact a double celebration–of Busby’s achievements, of course, but also of simply being able to meet in person, albeit still slightly cautiously with some offering elbows rather than hugs. 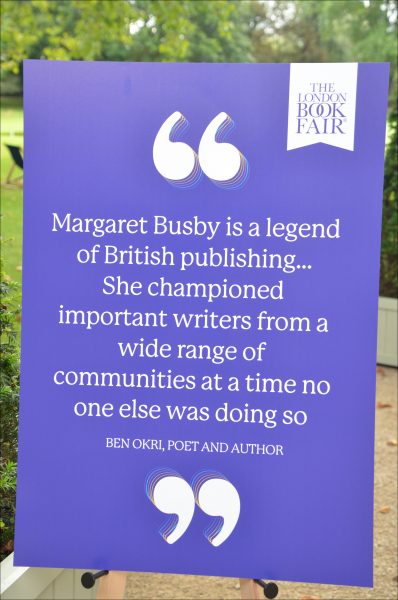 This was the first big publishing party many had attended since the LBF’s last Lifetime Achievement party for Bloomsbury’s Nigel Newton in March 2020, just before lockdown.

As London Book Fair director Andy Ventris said, “The title of Sally Rooney’s chart-topping new novel is Beautiful World, Where Are You. Well, looking out at you all now, I’d say it’s right here,” an assessment that was greeted with applause.

It was another Black publisher Busby quoted in concluding her speech. She recalled a conversation with Toni Morrison, who worked as an editor at Random House before becoming a novelist.

“We discussed the perennial pursuit of diversity in the publishing industry. ‘It’s not patronage, not affirmative action we’re talking about here,’ Toni said.  ‘We’re talking about the life of a country’s literature.'” 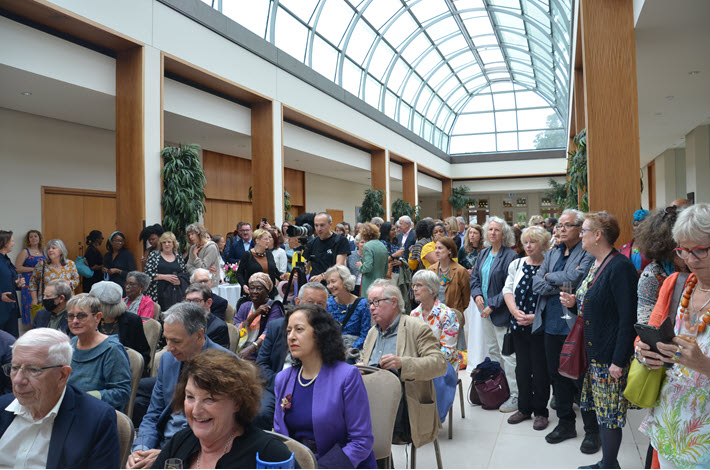 More from Publishing Perspectives on London Book Fair is here, more on the International Excellence Awards is here, and more on the United Kingdom’s publishing market is here.