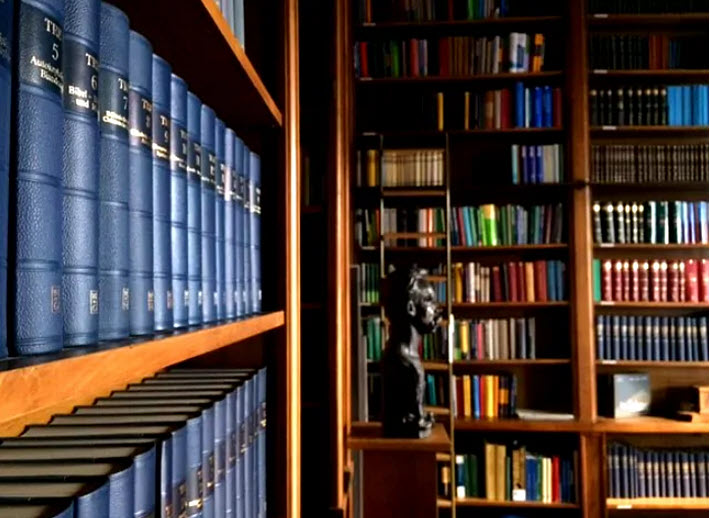 Four publishing houses were merged by Walter De Gruyter in 1923. The new digitization brought 10,000 out-of-print titles back into availability.

At the Berlin headquarters of the publisher, which produces more than 1,300 new titles annually as well as at least 750 scholarly journals. Image: De Gruyter

The Berlin-based four-year De Gruyter Book Archive project has been completed now housing digitized editions of more than 53,000 titles, some of which date to 1749.

All the titles involved have been scanned and catalogued and are now available digitally at the company’s site and in print-on-demand copies.

The archive now encompasses content across more than 270 years of German and European intellectual history. It includes the program of the publishing houses Georg Reimer, G.J. Göschen, I. Guttentag, Karl I. Trübner, and Veit & Comp., which Walter De Gruyter merged in 1923 to found his eponymous publishing house.

The archive, as the company’s press-relations team is emphasizing, is not only closely associated with names such as Klopstock, Wieland, Goethe, Schiller, Fichte, Humboldt, Schleiermacher, Tieck, Novalis, Kleist and the Brothers Grimm, but it also represents a collection of German classicism and romanticism, of the pre- and post-March periods, and of the post-Enlightenment enthusiasm for medicine and the natural sciences.

The publisher worked with partner institutions to identify, locate, and scan archival titles.

The Staatsbibliothek zu Berlin – Stiftung Preußischer Kulturbesitz (Berlin State Library, Prussian Cultural Heritage Foundation) for example, enabled the publisher to digitize numerous De Gruyter book titles from its holdings by making them available on loan. The way this worked is that all books were sent to partner Datagroup, where they were carefully “retro-digitized” and optimized by hand.

About 40 employees at De Gruyter and Datagroup were involved in the realization of the project.

With the completion, all archive titles are now available as indexed PDFs with full text search. They’re said to be easily discoverable through DOIs and MARC records and available to libraries as a complete collection, as individual titles, and individual packages.

In 2017, De Gruyter made the decision to digitize its entire book archive, having previously made 10,000 out-of-print titles accessible again with its on-demand service edition.

Carsten Buhr, the company’s managing director, is quoted saying, “We’re proud that we have now completed the digitization of our publishing archive, and we hope that researchers and historians of science will make active use of the digitized content today and in the future.”

Publishing Perspectives readers will want to note that De Gruyter is presenting a Master Class in Frankfurter Buchmesse’s new-format digital series on October 12 at 5 p.m. CEST / 4 p.m. BST / 3 p.m. GMT / 11 a.m. ET. The program focuses on how this academic publisher spent 13 months remaking itself as a fully digital business, with its own cloud-based platform launching in February. Some 2 million monthly users are accessing its content, and Brian Bishop, vice-president of digital transformation will work with Scott Williams, the company’s vice-president of technology, to describe and elaborate on the undertaking.

The event is available free of charge and will be given in English. Registration is required.