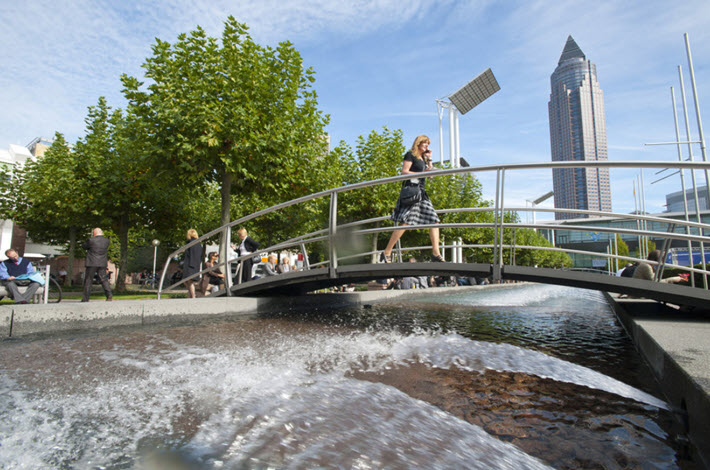 The framework and features of a pivotal Frankfurter Buchmesse: We have programming highlights and registration details here, as trade visitors prepare to travel—physically and digitally—to #FBM21.

See also:
Frankfurt’s Once and Future Guest of Honor: Canada on ‘Quite the Journey’
Richard Charkin: Why I’m Attending Frankfurt Book Fair in Person

In Tuesday’s (September 28) news conferences—one for the German news media and one for English-language media—Frankfurter Buchmesse organizers announced that more than 1,500 exhibitors from 74 countries now are scheduled to be in Frankfurt for the 73rd staging of what—in a non-pandemic year—is reliably the world’s largest book publishing trade show.

“I’m really excited and actually can hardly believe it,” said Frankfurt president and CEO Juergen Boos. “Finally, Frankfurt is taking place again in a physical form. And in a digital form, as well, but we’ve been waiting for this moment now for—it feels like—100 years.

“But actually, having had a digital-only fair last year, I think it’s about time that we see each other again.”

Boos reminded the press corps that special permission has been granted by German health authorities to admit as many as 25,000 people per day to Messe Frankfurt, the fairgrounds.

And one thing Boos mentioned to journalists is that Monika Grütters, minister of state for culture, is to open the fair in its ceremonial kickoff events. Grütters, who participated in programming during the 2020 digital evocation of the fair, has been instrumental in supporting Frankfurter Buchmesse with Germany’s billion-dollar Neustart Kultur program, described by the ministry as “the rescue package for the cultural and media sector.”

“This is a new book fair for us,” Boos emphasized, “as it usually is every year–but actually this year, it’s brand-new what we’re planning. We’re going to have a studio on the fairground, and we’re going to broadcast from there to all over the world” as well as on-site. In addition, he said, more than 400,000 titles are on the Frankfurt Rights digital rights trading service, and fairgoers can apply now to see, free of charge, presentations in the new digital Master Classes program, running in the week prior to the trade show’s opening.

New information was provided Tuesday on the Guest of Honor Canada program—being developed in a coordinated hybrid format for Messe Frankfurt and an extensive digital evocation. Here’s our article on Canada’s plans for a its guest of honor pavilion and a hybrid presence online.

In Frankfurt Week itself on the ground, as the trade show’s “hygiene concept” explains, those attending will be required to have provided documentation that verifies either full vaccination, proof of infection and recovery more than 28 days but less than six months earlier; or a negative COVID-19 test result within 24 hours of presence on the fairground. Personalized ticketing will be required, as will a separate ticket for each day, and testing centers will be provided for those who need a test on short notice.

“Having had a digital-only fair last year, I think it’s about time that we see each other again.”Juergen Boos, Frankfurter Buchmesse

Distancing is being stressed, and attendees will be expected to wear face masks at all times except when in a discussion in which the required 1.5 meters of distance is secure. Gatherings on the grounds, organizers said, “will be very, very gently dispersed,” and additional staffing is being deployed in the halls to monitor and ensure distancing.

What trade visitors will find there may be a more international profile than some have anticipated, including, Boos said, 41 national stands. “So it’s really going to be a quite an international event this year although we do have a lot of travel frictions, which means that especially our friends from the United States, from Latin America are still struggling to come to Frankfurt—but there will be some representatives.”

The “LitAg,” or Literary Agents’ and Scouts Center is standing now with at least 70 tables, and the fair reports that more than 140 of the newly introduced “workstation” spaces will be active.

Publishing Perspectives readers are familiar with many aspects of the upcoming fair’s plan. What we’ll do today is look at highlights of the various programmatic features of this year’s trade show. 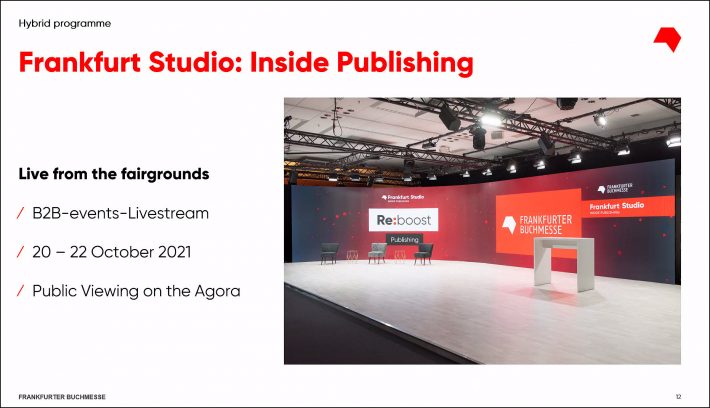 A rendering of the new Frankfurt Studio facility in Messe Frankfurt’s Hall 4, from which live programming will originated and be streamed during Frankfurter Buchmesse. Image: FBM

The development of a physical fair–from which programming can originate and be shared in a digital format–has produced the opportunity to originate programming from the fairground. The central hub of that activity is the new fully equipped Frankfurt Studio, which will produce B2B programming originating from Hall 4 and viewed in the Messe’s central plaza, the Agora, on a huge LED screen. 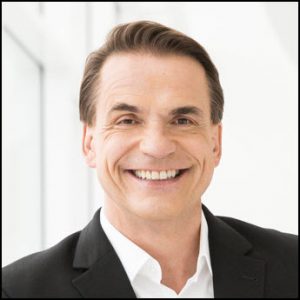 In his conversation, Dohle will be framing the revelations of the extraordinary experience of the past 18 months and the dynamics of the opportunities and challenges ahead for a world publishing industry that has proved its resilience and potential.

And Verlagsgruppe Random House was mentioned by fair organizers for creating a stand in Hall 3 that is designed to serve as a stage, itself, supporting as many as 30 authors who will be presenting their books during the course of the fair.

Highlights of the Frankfurt Studio programming include (all times CEST):

More specific coverage will follow in elements of the new Frankfurt Studio series, as details are firmed up. 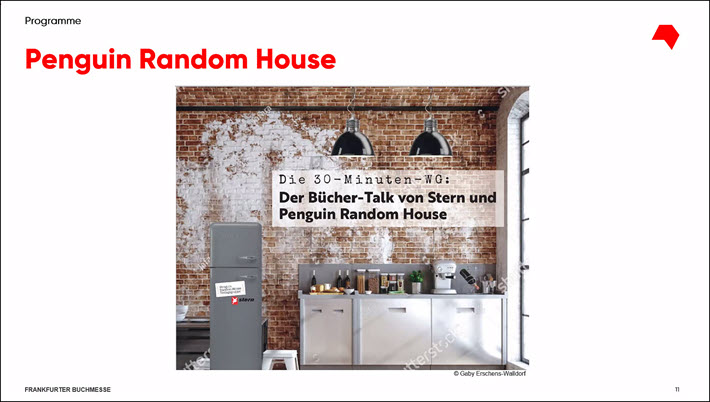 A conceptual rendering of the Verlagsgruppe Random House stand for Hall 3 at Frankfurter Buchmesse–designed as a large stage for presentations by more than 30 authors. Image: FBM

In the week prior to Frankfurt’s opening, two key elements of digital programming will be available both to incoming trade visitors and to those who will interact with the trade show from various parts of the  world.

A digital development first piloted in 2020, “The Hof,” is returning this year, as well, and we list highlights planned for that program below, too.

The academic track, on October 11, is programmed by Sven Fund, whose extensive expertise in the industry gives him a high view of trends and issues. He’s gathered speakers from across the academic publishing field to share brief, clear opinions on a single, each on a focused topic. These topics have been chosen by top experts from around the world, who are executing on these issues every day. Registration for the academic publishing program is here. Key speakers include: 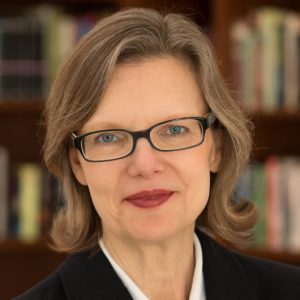 There’s a schedule for this new series of events, case studies, and more here, and you can apply to watch (with your My Book Fair log-in) here.

Highlights include (all times CEST): 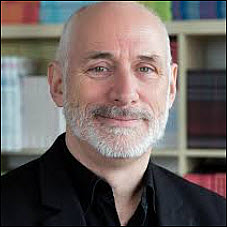 Building on last year’s success, “The Hof” series continues this season with a new line-up of interviews and networking for industry professionals. Produced and hosted by journalist Felix Zeltner, the program this year will run networking sessions following the two Frankfurt Conference tracks, as well as talks with industry leaders and authors. 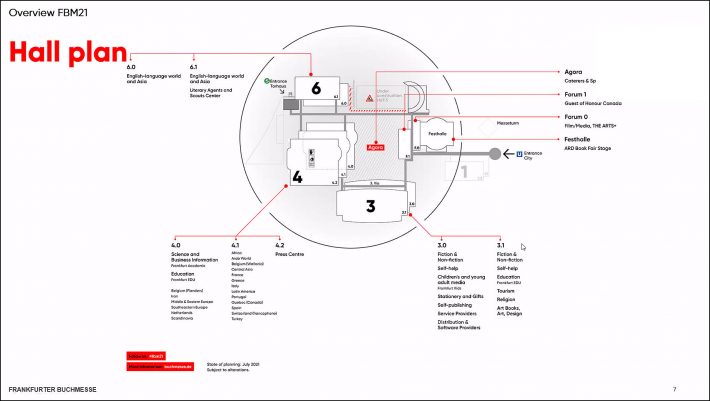 The ground plan for the 73rd Frankfurter Buchmesse. Image: FBM