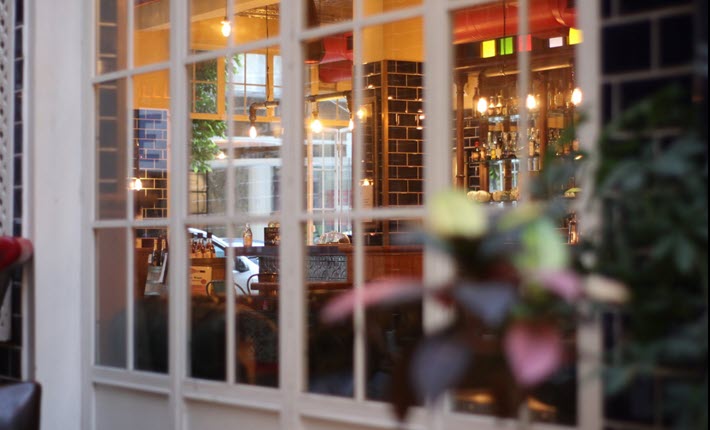 Aaliya’s Books, a much-loved Beirut bookstore named for a character in a Rabih Alameddine novel, has lost the battle to stay open—for now. 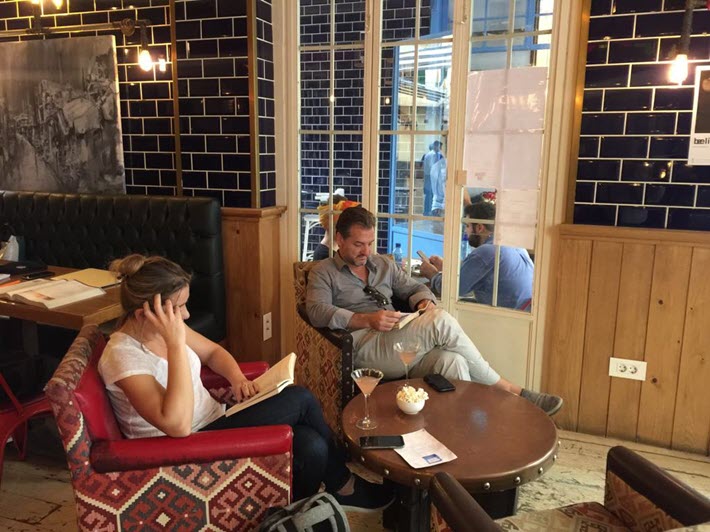 ‘Hopeful That It’s Not a Permanent Parting’

Beirut lost a beloved bookstore on Tuesday (August 31), when Aaliya’s Books in the Mar Mikhail neighborhood closed its doors amid Lebanon’s unprecedented economic and political crisis. The loss follows the closure in May 2020 of Dar Bistro and Books, a popular café and bookstore near Hamra Street.

Publishing Perspectives has spoken to Aaliya’s co-owner Niamh Fleming-Farrell in Beirut. “It feels very strange to see it closed,” she says. “I went down and washed up some glasses from last night, it’s really sad.”

Fleming-Farrell is a former journalist who once worked as a bookseller in Dublin. She founded the Aaliya’s Books in 2016 with William Dobson, a writer and English teacher.

Their store was first located at the back of a friend’s café. He sold them the business in 2017, retaining a share. Naila Saba became a fourth partner. Aaliya’s Books became a café and a bar, as well, a place holding many events including book and poetry readings, jazz nights, storytelling events, film screenings, wine tastings, and swing dancing in the alley.

“We were set on creating a space that we ourselves wanted to go to and that seemed to be infectious, and people came and felt comfortable and relaxed,” Fleming-Farrell says. “We were also very LGBTQ+ friendly. That easiness spread and people found it comfortable.”

‘A Space That We Ourselves Wanted To Go To’

A look at Aaliya’s Books, ‘a literary bar and café,’ through its windows at Beirut’s ‘The Alleyway’ center. Image: Aaliya’s Books

“People who would come were young or working as freelancers and weren’t necessarily affluent,” Fleming-Farrell says. “We felt like we’d rather have customers return day after day buying only one coffee than one customer who comes in only one day and spends $200.”

Asser Khattab, a Syrian journalist now based in Paris, fled to Beirut in 2017. He began to frequent Aaliya’s where he met a contact who eventually gave him a job with the Financial Times.

“I noticed it was the kind of place I’d always imagined but had never found,” he says. “There were beautiful books in English that I wanted to read or had read. It reflected its owners, because they were bookworms. Customers were people in the literary domain, journalists, people who loved to read, people working in human rights.

“I started talking to the employees and owners and customers and suddenly, a year later, I found myself part of a family. I made most of my close friends at Aaliya’s Books.”

‘An Exercise in Crisis Management’ 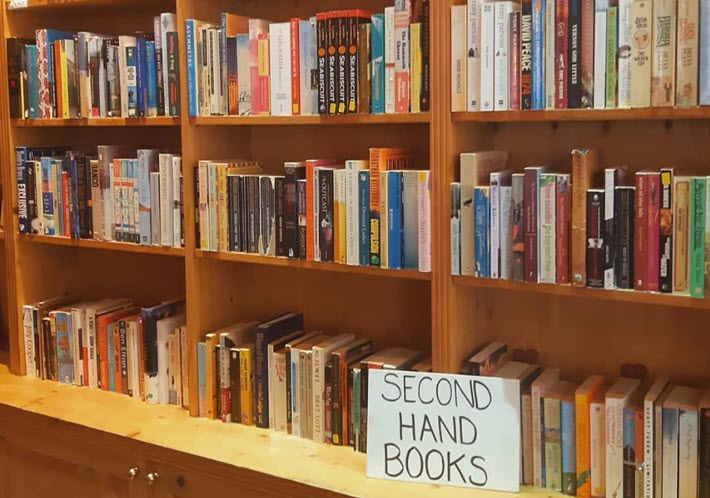 Fleming-Farrell had left Dublin for Beirut in 2009 at the end of the world financial crisis.

When Aaliya’s Books opened, she and Dobson worked hard for three years and were beginning to hit their stride in 2019 when Fleming-Farrell says she noticed that her suppliers “were suddenly nitpicky about whether it was 1,507 [Lebanese pounds] to the dollar or 1,515, whereas previously it was always just 1,500 [to the dollar]. These tiny differences became a thing and this gained momentum. They were closer to the source of the issue and felt its effects before we did.”

In October 2019, mass protests erupted against Lebanon’s corrupt political elite, “And since then it’s been an exercise in crisis management,” Fleming-Farrell says. No amount of business savvy except owning a bookstore in Venezuela could have prepared her for the currency collapse, which saw the Lebanese pound go from 1,500 to the dollar to a street rate of 20,000 today.

But Aaliya’s Books was also less than a mile away from the Port of Beirut where the terrifying explosion took place August 4, 2020, just months into the coronavirus COVID-19 pandemic.

Fleming-Farrell was briefly knocked unconscious, and the bookstore suffered extensive damage. A friend set up a crowdfunding page which met its target of £25,000 (US$34,438) so the staff could be supported and the bookstore, bar, and café could be rebuilt.

Although the bookstore and café were insured, a cause hasn’t yet officially been declared for the blast, so insurance companies haven’t covered what news reports indicate are a majority of local businesses’ claims. As Sarah El Deep reported for the Associated Press on August 3, “A year later, critics say the political leadership has succeeded in stonewalling the judicial investigation into the explosion.” 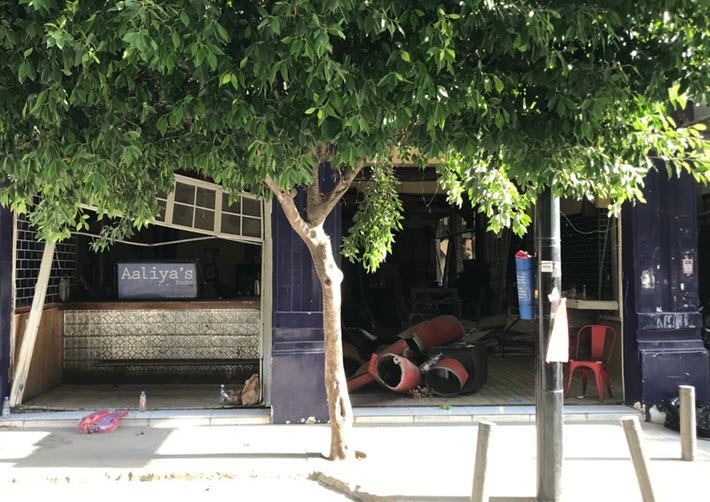 ‘It Won’t Be Pretty or Easy’

Aaliya’s Books soldiered on after the blast, even if people increasingly were no longer able to afford newly released books. 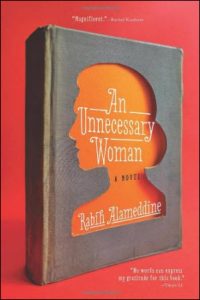 When it first opened, the bookstore stocked about 1,000 new titles. Quality literary classics, and second-hand books were also sold. Works by Dostoevsky were incredibly popular, Fleming-Farrell says, but Sally Rooney’s novels were too, even before the television series Normal People. Books by Lebanese authors translated into English also sold well, including Rabih Alameddine’s An Unnecessary Woman (written in English and published by Grove Atlantic, 2014), the main character of which provided the bookstore with its name.

When the protests began, “People were looking more for books on economics and politics,” Fleming-Farrell says, such as Hicham Safieddine’s Banking on the State (Stanford University Press, 2019).   “I noticed people were sitting in the café discussing how parliament works and how the constitution might be changed,” she says, “and I loved hearing about how the political system interacts with the economic system.”

But the economic crisis was affecting both people’s purchasing power as well as the bookstore, which in addition to losing a large quantity of new books during the explosion, had to import all its books, which were priced in dollars and euros.

Fleming-Farrell says they became very cautious when ordering stock, and second-hand books became their main book business. But operating costs more than doubled monthly and the decision had to be made to close.

“We’ll take a few weeks and cry and read a good novel and then we’ll sit down and consider how we might move forward.”Niamh Fleming-Farrell, Aaliya's Books

“I haven’t mentally accepted that we won’t resume at some point,” Fleming-Farrell says. The rent has been paid until December, “so we’re not being pushed out. We’ll take a few weeks and cry and read a good novel and then we’ll sit down and consider how we might move forward. It won’t be easy or pretty.

“I’m really grateful to have ended up being a part of Beirut. I’m hopeful that it’s not a permanent parting.”

The bookstore has played an integral role in the life of Beirutis over the past few years, offering water and access to toilets for people participating in the protests, and, in recent weeks as electricity has dwindled, giving people a place to charge their phones.

“Their generosity was beyond anything I had ever experienced,” says Asser Khattab—adding that his best friend threw him a farewell party at Aaliya’s Books before he left Beirut to seek asylum in France in early 2020.

More from Publishing Perspectives on publishing in Lebanon is here, more on the Port of Beirut blast is here, and more on bookselling is here.