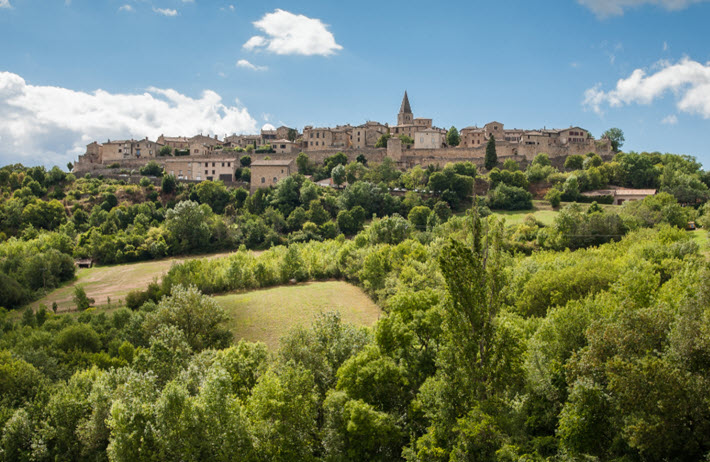 Editor’s note: As Publishing Perspectives readers will remember, Richard Charkin decamps London in August for a farmhouse in southwestern France. We’ve asked our man in the Tarn to look around while he’s there at local bookselling and to survey the condition of provincial French book retail amid the ongoing coronavirus COVID-19 pandemic.—Porter Anderson

My editorial boss suggested I write about the impact of the pandemic on the French book industry outside Paris, and I diligently set about doing the necessary research. First stop was a long uphill walk to the village of Puycelsi.

I wanted to ask the owner of this tiny but beautiful shop how damaging had been the lack of tourists.

The answer was clear as I approached. The books had all gone, to be replaced by pots and vases. Not a great start to the research.

Before and during the pandemic: Le Temps de Lire (Time to Read), left, was a ‘tiny but beautiful’ bookshop in Puycelsi. Now, right, it’s no longer Le Temps de Lire. The shop has become ‘Atelier Aloussa.’ Images: Richard Charkin

Next stop, the market. Apparently business as usual. The owner confided that she’d make more money selling tapenade and olives but she said that books were doing okay in spite of everything. 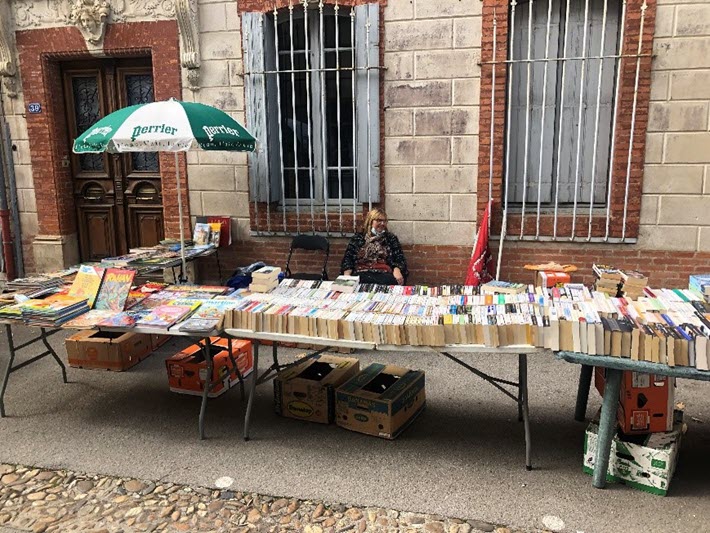 In the marketplace. Image: Richard Charkin

Onward then to a typical French independent bookstore in Gaillac and their terrific receptionist and bookseller, Angelique. 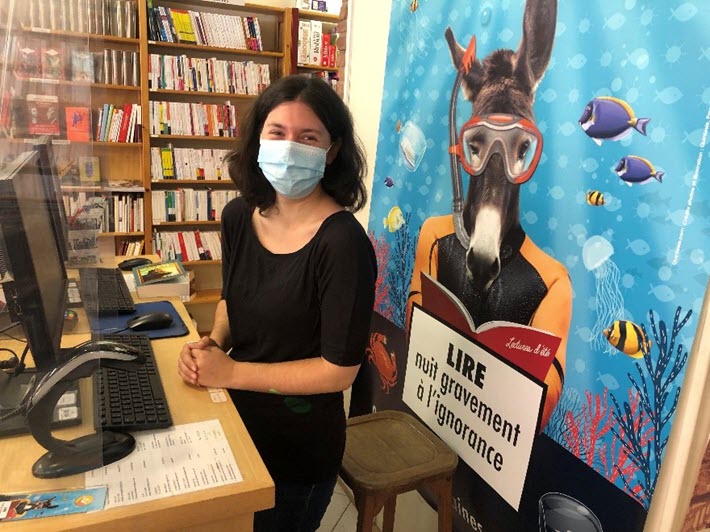 Librairie @ttitude is a small chain—for those in London, think Daunt Books. It has a total commitment to the local clientele. 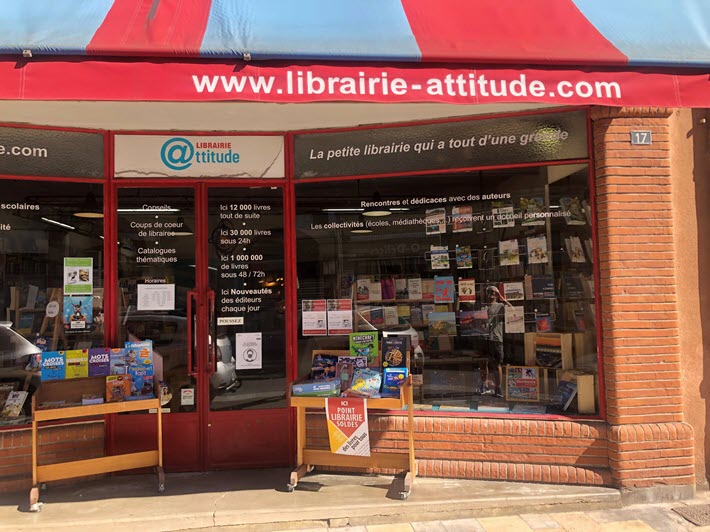 The stores in the @ttiude chain were shut down along with all other bookshops in France during the first lockdown in 2020. But the French government in its wisdom declared bookshops an essential service, allowing them to reopen and operate as usual, subject to normal social distancing and mask-wearing—both of which are assiduously observed but not restrictive.

This shop and its sisters in other towns are thriving.

Customers are reading, buying, enjoying and all kinds of literature—the ubiquitous BDs (bandes dessinées, comics, for children and adults); the Prix Goncourt winners or wannabe winners; mass-market paperback fiction; how-to guides; travel. But not an English-language title to be seen.  They’ve initiated “le click and collect,” online direct delivery, and the shops claim to be damaged neither by Amazon nor the supermarkets.

However, this picture of a small section of Gaillac’s local Leclerc supermarket tells another story: shelf upon shelf of paperbacks and bestselling hardbacks with three-for-two offers on books more than three years old to circumvent the fixed-price law. Five percent off on all other titles. 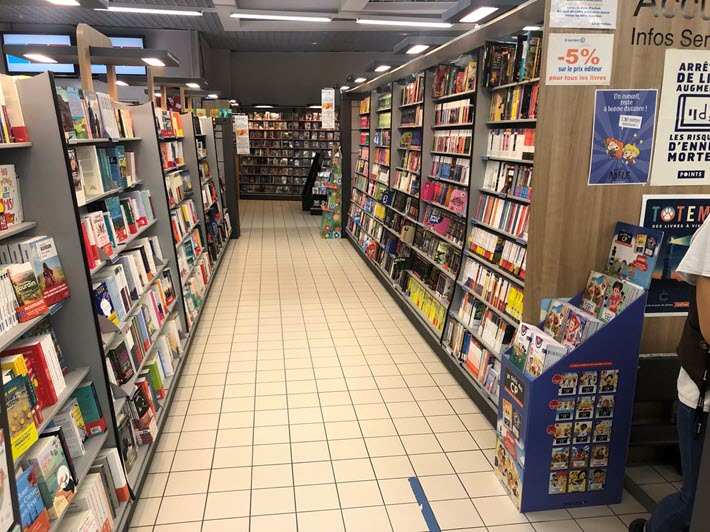 While supermarkets in the UK have become less of a threat to independent bookshops as they seem to have lost interest in anything but Top 10 paperbacks, it seems that in France they’re still major competitors across the board. 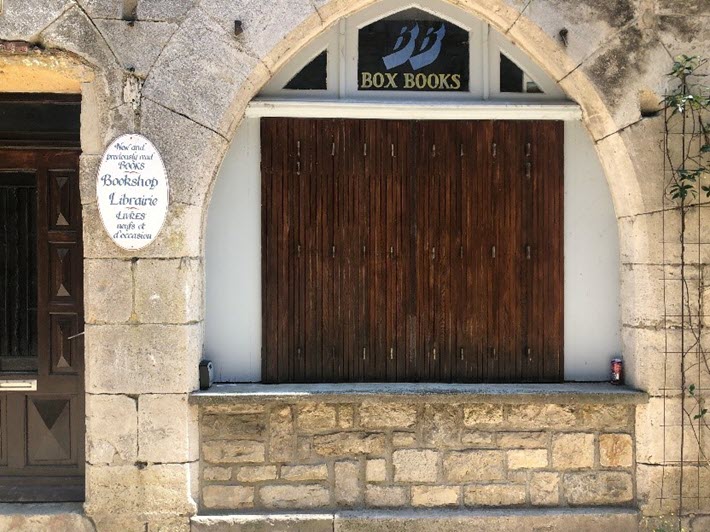 Hunting for an English-language bookshop took me to The English Bookshop in Saint-Antonin-Noble-Val.

As you can see, it was disappointingly closed during normal working hours. Not a great sign of success, but without many tourists you can understand why the owners may have decided to take things easy.

But an optimistic outlook and resilience were on display at this lovely independent store, La Femme Renard in Montauban.

Outside and inside Montauban’s La Femme Renard. Notice the directional arrows on the floor inside. Image: Richard Charkin

Finally, I made a visit to a typical médiathèque. There is some sort of free library service in every town and village I visited, and they’re by and large welcoming, relevant, and have been doing great “business” throughout the pandemic.

This is a cherished service according to everyone I asked including the well-masked receptionists at this one in Saint-Antonin-Noble-Val.

At the médiathèque in Saint-Antonin-Noble Val. Images: Richard Charkin

What have I learned from this light and informal tour of provincial book outlets in southwest France?

Retail price maintenance is revered and used to explain the relatively low market share enjoyed by Amazon and the health and vitality of the independent bookshop sector—as Evelyn Waugh wrote in Scoop, “Up to a point, Lord Copper.”

Independents can thrive without retail price maintenance. For instance, Australia. That said, the French authorities seem to have devised a system which allows a degree of flexibility without abandoning the central fixed-price concept—with discounting allowed three years after the original registration of a title, and five percent discount allowed on new books, as well as restrictions on discounting of imported books, and so on. And it’s hard to argue with such a thriving book ecosystem in spite of my Anglo-Saxon prejudice against commercial regulation.

But perhaps the most impressive aspect is that the French book trade operates within a national and governmental recognition of the importance of book availability and literacy for cultural, economic, mental, and social health.

How I wish I could say the same about the United Kingdom and other governments. Did the UK or United States declare bookshops to be essential? Did the UK adequately fund the public library sector? Did the UK include books in its overseas aid funding? 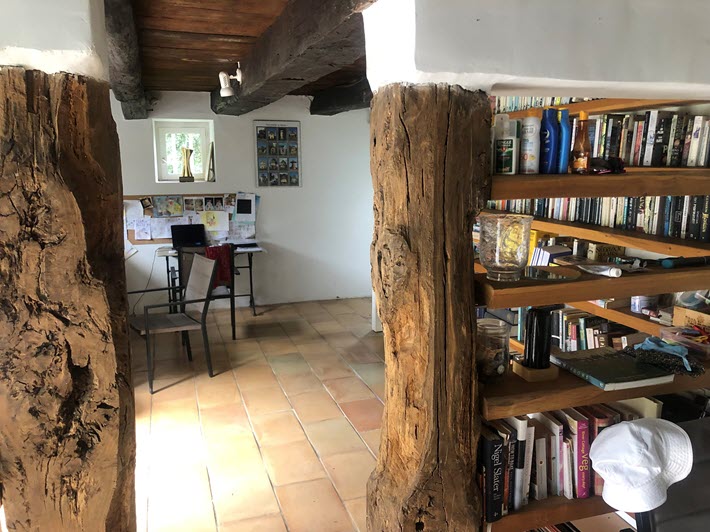 Join us monthly for Richard Charkin’s latest column. More coverage of his work from Publishing Perspectives is here and more from us on the French market is here.