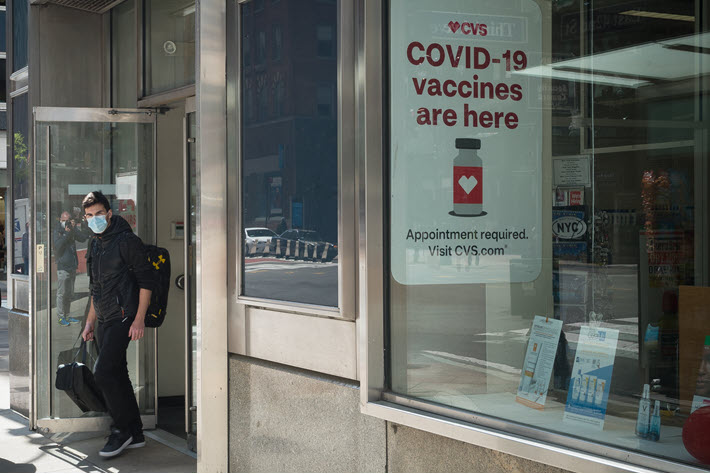 The September reopening plan for Hachette Book Group is postponed, even as NPD Books charts a good July in US print—but potential concerns ahead.

A positive but cautionary message is going to reporters today (August 9) from Kristen McLean, executive director and industry analyst with NPD Books and Entertainment.

July finished down 5.6 percent compared  to June, McLean’s data shows, “which is typical for this time of year in the book market.”

“However,” McLean writes, “pulling back to the 10,000-foot view, momentum is slowing—even beyond the normal summer lull. In the monthly rolling 52-week view, sales dropped below the zero mark for the first time, as the pendulum swung back from the extreme highs of the last 12 months.”

She makes it clear, too, that the rest of 2021 could have several influences on the American market’s performance this year.

“If we just keep chugging along on this track, staying close to 2020 volume,” McLean says, “sales will continue this gentle landing and likely finish the year between 5 and 8 percent over last year.

“However, there are some big x-factors in front of us, including the impact of returning to classrooms and offices, which is expected to play out in September, and which could drag sales down a bit.

“In addition, the constantly evolving situation with the ‘delta’ variant is introducing significant uncertainty into the outlook for a return to school, work, and college—which could have effects, not only the book market, but also on the larger economy.”

In her interpretation of the US market’s progress this year, McLean talks about a “gentle descent” from the elevated levels of performance seen after the COVID-fueled energy of 2020.

“While the weekly figures have fallen slightly below 2020 for the last month,” she says, “they’ve stayed well above 2019 volume, giving the market a gentle descent, as we head into fall. The entire market continues to shed about a point of year-to-date performance each week.”

The month of September, McLean says, will be “pivotal for understanding the trajectory of the remainder of the year,” as the return to work and school will affect the time people have for buying and reading.” 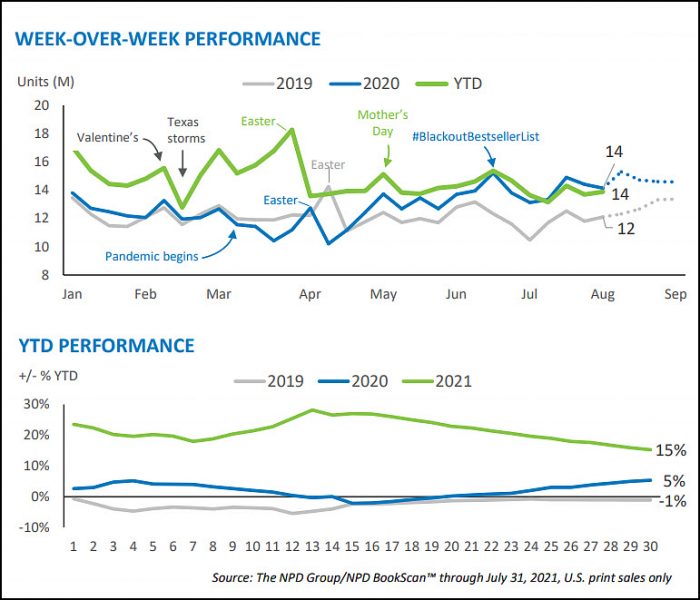 But, per her earlier note about what Donald Rumsfeld would have called “known unknowns,” even the expectation that office reopenings will happen in September is shifting.

“In a message to the Hachette Book Group staff last Wednesday (August 4), CEO Michael Pietsch announced that the company has decided to postpone its September office reopening” in light of the increasingly serious surge activity of COVID-19’s delta variant.

And Pietsch stopped short of setting new dates, saying that the company will provide employees with a minimum of four weeks’ notice before the move forward with an opening. 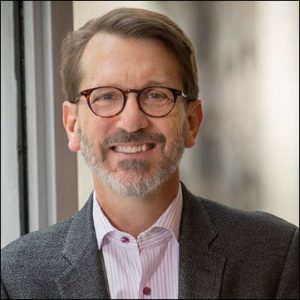 What’s more, starting today (August 9), Hachett’s offices—which have some limited availability “within our current capacity limits”—will require that “any employee who wishes to visit an HBF office will be required to provide proof of vaccination in advance,” Pietsch writes.

“Face coverings will also be required in our offices at all times, unless you are alone in a conference room or at your desk without anyone in an adjoining cubicle.”

The company is next providing more information on current in-office regulations and on business travel issues soon, Pietsch says.

In her new report, McClean cites several points of content patterns that will sound immediately familiar

“Volume for all super-categories dropped in July—the four weeks ending July 31,” she says, as “compared to the prior four-week period. This is a seasonal trend. Book
buying slows in July. It doesn’t point to any major shifts in the market.”