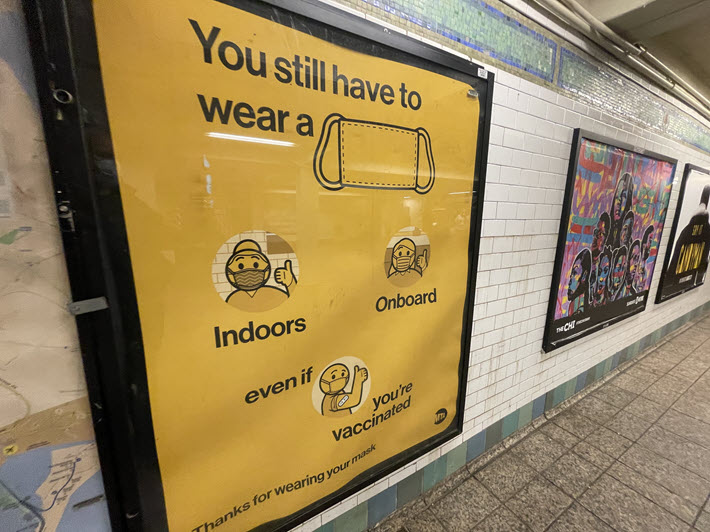 A sign from the Metropolitan Transportation Authority in New York City’s subway system on August 20, reminding passengers that masks are required indoors and aboard subway cars, regardless of vaccination status. Image – Getty iStockphoto: Chain Gang Pictures

A reason to follow the numbers in the American book publishing market closely right now is that, as NPD Books’ Kristen McLean puts it in her report today (August 30), “The next month will be telling.”

In the week ending August 21, the United States’ print sales data shows the market “closely following the 2020 numbers,” McLean says, selling 470,000 more units than it did in 2020, which many called “the pandemic year” until it became obvious that 2021 has become a second pandemic year.

“The market finished the week up 13 percent for the year-to-date on a weekly volume of 14.8 million units,” McLean says, “which is about 1.5 million units higher than the historic average for week 33. As we head toward the fourth quarter, the market’s ability to stay above 2019 weekly volume will be the determining factor in how we finish the year.

“If it stays above, we will have a strong finish. If it drops down closer to 2019, we expect a more typical (but still good) finish–rising 2 percent to 3 percent over last year. The next month will be telling.”

And this is the last week of August reportage, at least until after the September 6 US Labor Day break, so we’re reaching a point at which it’s not uncommon to pause and look at what’s at hand before plunging down the autumn-to-seasonal-holidays chute.

Source: NPD Group/NPD BookScan through August 21, 2021, US print sales only

The US market showed a 3-percent gain in the week ending August 21 over the previous week. By comparison to the same week in 2020, it was up 1 percent.

While those factors are small, McLean sees weekly volume remaining “well above 2019 levels, which will be the real factor in determining the strength of the 2021 finish as we head toward the holidays.”

Source: NPD Group/NPD BookScan through August 21, 2021, US print sales only

For those watching the top sellers, McLean points out, it was an interesting week. As she puts it, “Politics books dueled with new fiction titles, and two #BookTok favorites.” 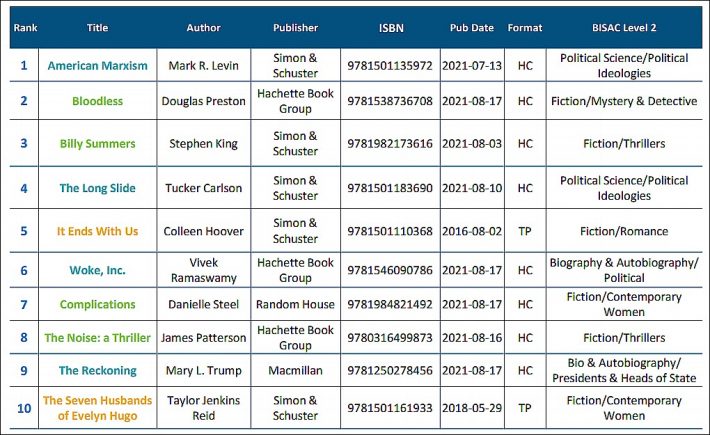 Source: The NPD Group/NPD BookScan through August 21, 2021, US print sales only

The new book by Donald Trump’s psychologist-niece Mary Trump, for example—The Reckoning: Our Nation’s Trauma and Finding a Way to Heal—was released on August 17 (Macmillan/St. Martin’s Press) and has entered the Amazon Charts at No. 16 in most-sold nonfiction.

Its place at No. 9 on NPD BookScan’s rankings ranks it just ahead of one of the two #BookTok titles, The Seven Husbands of Evelyn Hugo by Taylor Jenkins Reid from Simon & Schuster.

When it comes to more politics, there are more Trumpian entries, including at No. 1 on NPD’s list, American Marxism (Simon & Schuster/Threshold Editions) by “Life, Liberty, and Levin” Fox News personality Mark R. Levin. And there’s The Long Slide: Thirty Years in American Journalism (Simon & Schuster/Threshold Editions) at No. 4 by the alpha Fox commentator Tucker Carlson, another Amazon Charts title, this one standing at No. 11 in most-sold nonfiction.

In addition, Vivek Ramaswarmy’s Woke, Inc.: Inside Corporate America’s Social Justice Scam (Hachette/Central Street) is at No. 6 on the Amazon Charts this week.

More on the United States market is here, more on the NPD Group’s reports is here, and more from Publishing Perspectives on political books is here. More from us on industry statistics is here.