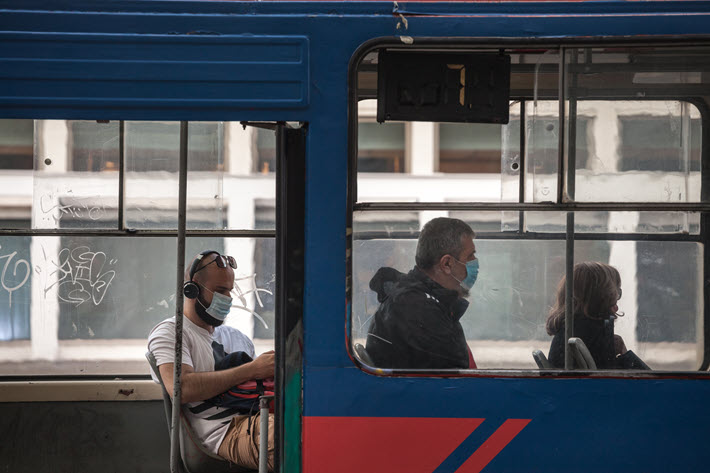 The Panorama Project’s major study of US consumer engagement includes audiobooks in the pandemic year 2020, and context around reading and other entertainment media.

As many programs and presentations this year have demonstrated, the digital acceleration prompted by the still ongoing coronavirus COVID-19 pandemic  created strong market movement for audiobooks in 2020, in many parts of the world and particularly in the United States.

The Audio Publishers Association today (July 20) has provided to Publishing Perspectives two tools for gathering insights into the US market’s growth dynamics last year relative to audiobooks. The Immersive Media & Books 2020 Consumer Survey was developed by the cross-industry research initiative called the Panorama Project, and included as part of its programming a conversation with the survey’s researchers, Rachel Noorda and Kathi Inman Berens of Portland State University.

Panorama and the Audio Publishers Association offer several key top-line findings that add numbers to our growing understanding of the energy in digital formats and particularly in audio— energy that has in many markets, the States included, persisted beyond what some would have expected into this year.

Note, for example, the importance to the trade book publishing industry of the second point in which we see audiobook-engaged consumers buying the same book in multiple formats. This is a key to the messaging coming from the association and the Panorama Project survey, a depiction of audiobook consumers as both interested and integrated in the broader community of literature and its commerce.

Audio enthusiasts surveyed said their favored genres in adult fiction are mystery, classics, fantasy, romance, and thriller. In adult nonfiction, respondents listed history, biographies and autobiographies, body/mind/spirit, spirituality, and business. The audio enthusiasts surveyed said they engage with YA (fiction and nonfiction) in all genre categories at higher rates than was reported by the general survey population.

Michele Cobb, executive director of the Audio Publishers Association, refers to 2020 as “a banner year for audiobooks with more than 71,000 titles published and the ninth year of double-digit sales growth” in the American market.

Noorda, one of the two lead researchers, is quoted today, saying, “Over the past several months, Kathi [Berens] and I have had wonderful opportunities to share our findings with publishers, librarians, booksellers, and authors. It’s our hope that Immersive Media & Books will serve as a reference work for the entire industry, including audio publishers whose products continue to experience rapid adoption from a wide range of consumers.”

Berens emphasizes the range of users registered in the survey, saying, “Audiobook engagers are significantly more active across all book formats and buy more books than our general survey population. Opportunities abound for print book publishers to produce more audiobooks and for libraries to expand their collections of audiobooks.” 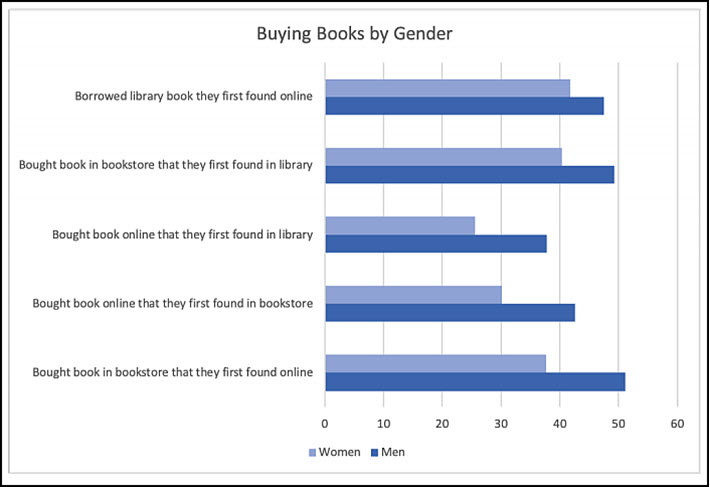 Many in publishing may want to spend some time with the survey’s report for the very reason that audiobook data–while the main interest of the Audio Publishers Association and of our article today–is by no means all you’ll find. There are, in fact, subtleties and nuances being brought out in this research frequently not found in other such efforts.

‘Men, millennials, non-white people’: Here’s one that flies in the face of traditional publishing thinking that focuses heavily on the female and white consumer: “Demographics to watch: men, millennials, and non-white people of all generations. They engage with more books than middle-class baby boomer women, except in the context of book gifting.”

There are people in today’s book industry who might be almost scandalized to hear that baby boomer women may not be the core target except for gift purchases. Publishing in the United States, with a workforce that’s more than 70 percent female and a history of “leaving male money on the table” rather than cultivating men and boys as reading consumers, may need to revisit the assumptions that have put such conditions into place.

Avid book engagers: Quoting from the report regarding its own study sample: “In the general survey population, book buying amounts stayed the same during [the COVID year 2020]. However, we know that there was an 8.2-percent increase in book sales in 2020 (as reported by NPD). Therefore, avid book engagers (meaning they consume four or more books per month) drove the biggest book-sales jump in a decade.”

That finding turns around a couple of popular concepts–one being that in COVID-driven confinement, people who might not normally touch a book gave one a try, and that it was this newbies-reading crowd that raised the tide. What the Berens-Noorda input suggests instead is that it was existing book enthusiasts doubling down on their fondness for books that drove the advances made during the pandemic’s heaviest spread-mitigation measures.

This means to the industry that it’s time to think like those who run major loyalty programs in other industries such as travel: How can publishing be better to its best customers, even as efforts are made to widen the consumer base with newcomers?

When film and television seem to loom over reading’s future, that idea of collaboration starts to look better and better, as some of our more proactive publishers can tell you. 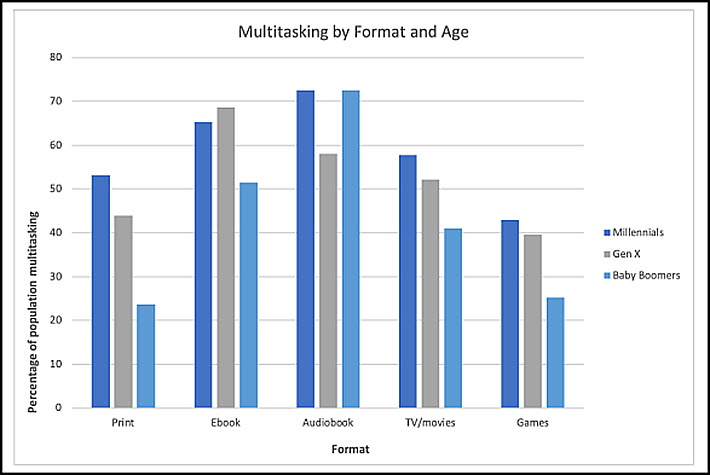 Multitasking: And back to the audiobook sector, this is interesting: “Compared to the immersive reading experience of print books, most audiobook and ebook engagers are multitasking (70 percent for audiobooks, 61 percent for ebooks).”

It’s not news that respondents might say they can manage chores and other tasks while listening to audiobooks, of course–Cobb’s association has given us that insight for years. But to realize that between 60 and 70 percent of ebook and audiobook users say they’re multitasking indicates that this is, in fact, something approaching a requisite for some consumers, a factor that needs to be taken clearly into account in how digital-format products are constructed and marketed.

‘Within the Larger Media Ecosystem’ 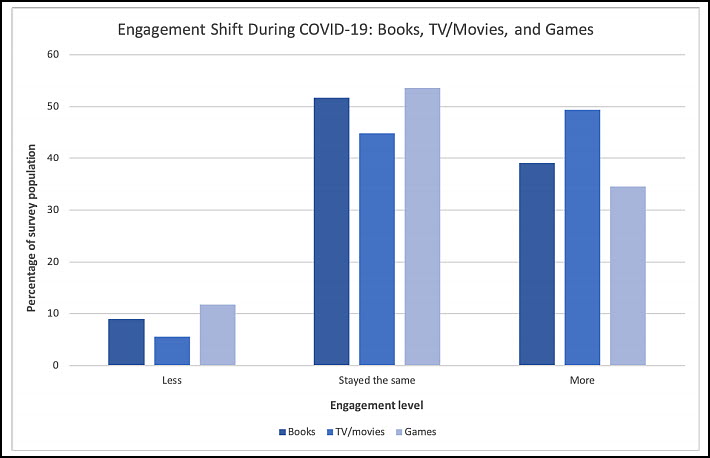 The survey was funded by the American Library Association, the Book Industry Study Group (BISG), the Independent Book Publishers Association, and OverDrive.

Beyond the audiobook focus of the association and our interest here, the Immersive Media & Books 2020 is intended to be unusual in “considering books within the larger media ecosystem, including TV, movies, and games.” Data was collected from a base sample of 4,314 respondents. The work was conducted in autumn 2020.

More about the study and links to it and to the video conversation about the work can be found at the Panorama Project here. We’ll also embed the Berens-Noorda conversation here: