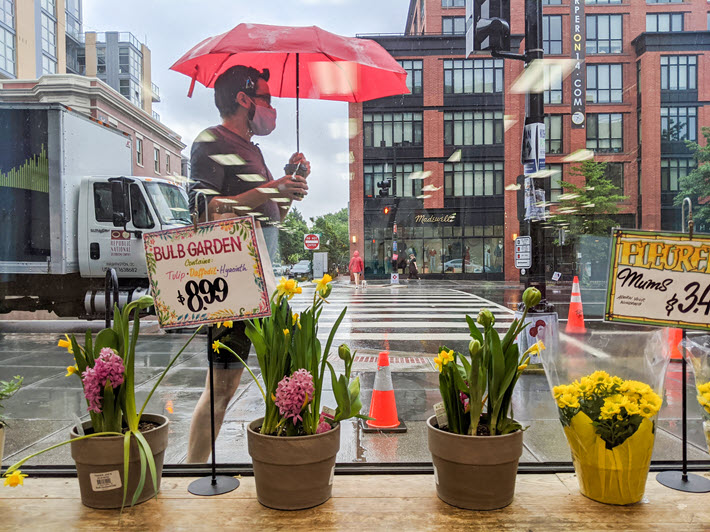 Punctuated by rumors of royal royalties for Prince Harry’s memoir, political books in the bottom of the summer are mostly focused on the Trumpian finale.

The Twilight of the Term

As far as what’s on sale today in the United States market, I Alone Can Fix It: Donald J. Trump’s Catastrophic Final Year (Penguin Random House) is the most visible and talked about release, not only as part of a rash of political-book releases but also in terms of its revelations. 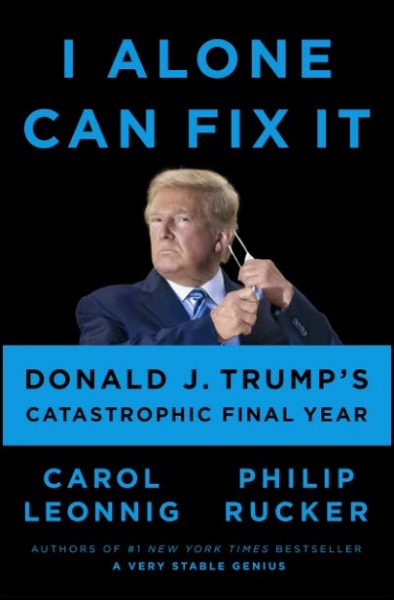 It’s written by the Washington Post’s Carol Leonnig and Philip Rucker. (Leonnig’s profound Zero Fail: The Rise and Fall of the Secret Service was a May release of impact, too, also from Penguin Random House.)

I Alone Can Fix It—its title a direct quote of one of Donald Trump’s ego-driven assertions—is, as Dwight Garner wrote at The New York Times on Thursday (July 15), a “bravura introduction of a new American hero, a man who has heretofore not received a great deal of attention: Gen. Mark A. Milley, the chairman of the Joint Chiefs of Staff.”

Milley, it’s being learned from this book and reporting that Susan Glasser and Peter Baker are doing for a book of their own, took extraordinary care during Trump’s final days in office to be sure the defeated president wouldn’t touch off a military conflict or otherwise endanger an already badly shaken republic. Kori Schake’s essay at The Atlantic looks at issues around the Milley revelations, themed on both the value of the general’s protective services to the nation at a time of impetuous peril in the White House and the question of the relation to civilian command raised by other parts of Milley’s service. 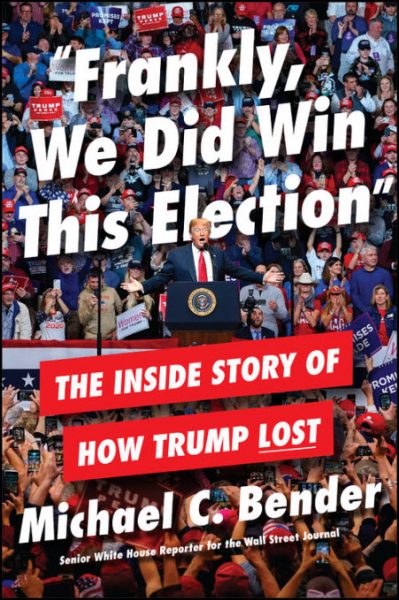 In other books’ anecdotes beguiling the readership, Devan Cole has written at CNN, the Wall Street Journal reporter Michael Bender’s Frankly, We Did Win This Election: The Inside Story of How Trump Lost (Hachette/Twelve Books, July 13) looks back at Trump’s fury over White House leak revealing that the first family had been taken to the executive mansion’s bunker for safety during protests driven by the murder of George Floyd.

And Meredith McGraw has written at Politico, Trump was annoyed that about one of Bender’s anecdotes “that described [the former president] telling his former chief of staff John Kelly that Hitler, for all his horrors, “did a lot of good things.”

It should be interesting to see how Michael Wolff’s third Trump book Landslide: The Final Days of the Trump Presidency (Macmillan/Henry Holt) will fare amid so many pieces about the sunset of the Trump administration, and more on the way. There are suggestions that Henry Holt changed the book’s release date as it became clear that others on the topic were also moving out during this timeframe. 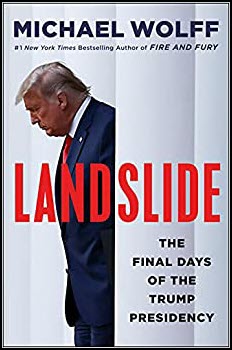 Wolff’s Fire and Fury was the first demonstration of Trump’s unintentional ability to become bookseller-in-chief when he tried to stop the book’s publication.

Inaccuracies were challenged in that book, and his second book on the Trumpian travails, Siege, in 2019, had a lower-profile reception.

In The Guardian’s review of Wolff’s book, Peter Conrad calls it the third of Wolff’s “jocular trilogy,” good phrase, writing, “Wolff shrugs that Trump is ‘nutso’ and regards his calamitous administration as a ‘shitshow,” which may be less happy a conclusion for the American population than for Wolff, of course.

“Despite this nihilistic frivolity,” Conrad, “Wolff’s attitude matches that of his subject.”

Today something some will understand as a political release has been announced. Harry–now the prince of Santa Barbara–is to publish a mid-30s memoir late next year, Penguin Random House has announced that it will be produced “in print and digital formats in the United States by Random House and in Canada by Random House Canada.

“Transworld, an imprint of Penguin Random House UK,” PRH’s message has it, “will publish the book in the United Kingdom, with additional publishing territories to be announced at a later date. An audiobook edition will be released simultaneously by Penguin Random House Audio.”

Could the Obamas’ sales records be challenged so soon?

While many, especially in the States, may not see it this way, political dynamics are easily anticipated in such a book, particularly as Harry’s relocation to the Newer World has come with such an outpouring—to Oprah Winfrey and others—of the duke of Sussex’s concerns about perceived racial- and gender-biased behavior among members of Britain’s royalty and wider society.

While terms aren’t being stated in today’s announcement from PRH, Katy Hershberger at Michael Cader’s Publishers Lunch today notices what many of us did, that the release says Harry “will be donating proceeds to charity.” As Hershberger writes, that note is “discernibly missing the modifier ‘all.'” And she goes on to write, “For what it’s worth, the Daily Mail has one miscellaneous source who says, ‘Harry’s advance alone is in the US$15 million range,’ while ‘experts’ tell the site ‘that Harry will have been given “at least” a $20 million advance for his memoir.’ Yet another ‘royal expert’ Robert Jobson tells The Sun the advance is $20 million (£14.5 million) but it’s not clear if any of these numbers are more than speculation.”

Media messaging from the publisher says that Harry “will share, for the very first time, the definitive account of the experiences, adventures, losses, and life lessons that have helped shape him.” Some might question that “very first time” copy, as it seems at times that the man hasn’t stopped sharing those things since decamping London.

JR Moehringer, according to Oli Coleman and Sara Nelson at Page Six, is co-writing with Harry. Coleman and Nelson lead with, “Get ready for the most explosive book of the decade”—a line that in the first year of the decade may prove to have been premature. 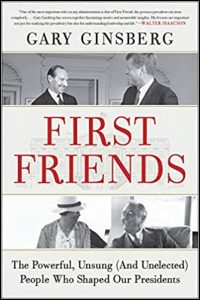 And meanwhile, an entirely different approach to the political realm, First Friends: The Powerful, Unsung (And Unelected) People Who Shaped Our Presidents, has quietly been gathering appreciation since its July 6 release, another from Hachette’s Twelve.

Gary Ginsberg, a former Clinton aide, looks at friendships including those between Franklin Roosevelt and Daisy Suckley; between Thomas Jefferson and James Madison; between Bill Clinton and Vernon Jordan; and between John Kennedy and David Ormsby-Gore.

Ginsberg writes, “Politics is, of course, the bastion of convenient quote-unquote ‘friendships,’ in numbers perhaps exceeded only by people’s lists of ‘friends’ on modern social media.”

But the author believes he’s spotted something far more meaningful and authentic, and in nine cases of White House relations. Imagine a topic like friendship being conjured in Washington, DC. The heat must be getting to everyone.