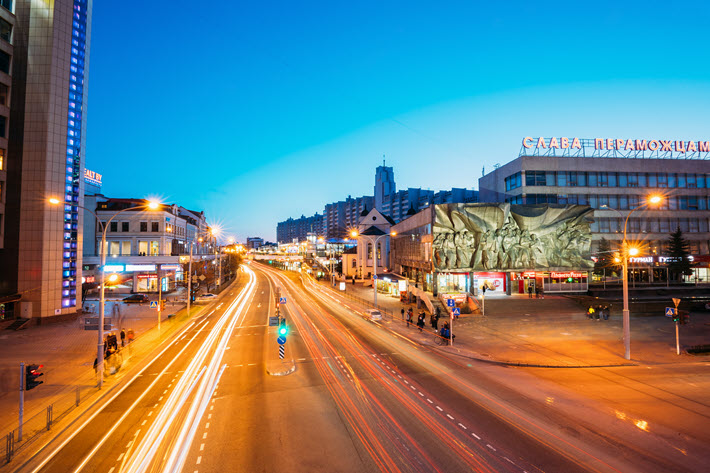 As PEN Belarus is told it’s to be shuttered, PEN America’s Suzanne Nossel speaks of ‘when a government silences and stomps on its writers and vital voices’ that ‘will be vindicated.’

‘We Stand in Solidarity’

Disturbing news from PEN America, which has issued a notice to the media this afternoon (July 22) saying that the Belarusian justice ministry has sent a letter to PEN Belarus, informing the organization that it’s to be closed.

The news follows government raids on offices of cultural and rights organizations and of media outlets, as described in our article from Friday (July 16).

In a statement provided by PEN America, its CEO, Suzanne Nossel, is quoted, saying, “When a government silences and stomps on its writers, it reveals a level of shame and decay that leaders are aiming to hide, but instead only expose.

“Belarus’ leaders may think they can suppress the truth by muzzling those who dare tell it, but the story of the will of the people and the scale of brutal repression will find its way to the world.

“We stand in solidarity with the writers of PEN Belarus and are determined to ensure that their vital voices are heard and their rights to express themselves vindicated.”

One point she made to CNN’s Jim Sciutto—an international affairs specialist and author of The Madman Theory: Trump Takes on the World (HarperCollins, 2020)—is that she thinks of herself not as the opposition leader but as a figure in the majority.

Her reference was to the August 9 election, claimed by longtime strongman Alexander Lukashenko as a victory but said by Tsikhanouskaya and her voters to have been a travesty. Tsikhanouskaya lives in Lithuania for safety at this point. 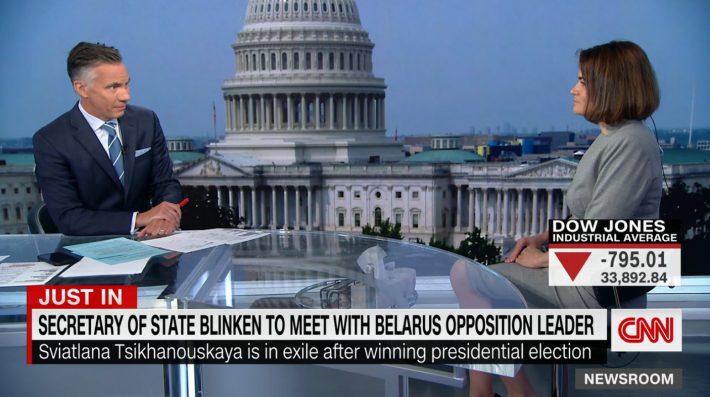 She said she discussed sanctions and support for civil society in her meeting with the United States’ secretary of state Antony Blinken, along with undersecretary of state for political affairs Toria Nuland, and other senior State Department officials on Monday, as reported by CNN’s Jennifer Hansler.

The action reported by the PEN network of international chapters today coincides with the US-funded Radio Free Europe/RadioLiberty report on Minsk’s justice ministry also asking the country’s supreme court to shut down the Belarusian Association of Journalists (BAZh) for what the regime calls “repeated violations of the law”.

Svetlana @Tsihanouskaya at the White House today after the meeting with @JakeSullivan46: "I asked the US to be the guarantors of our independence, that they will stand for our independence if it is under the threat. Our independence is the highest value for Belarusians." pic.twitter.com/rJ1e1336Fe

From Nina George, president of the European Writers’ Council, a statement provided to Publishing Perspectives reads, “The Union of Belarusian Writers, which is critical of the government, is also awaiting legal action from the ministry of justice and is threatened with the forced dissolution of the association.

“In the last 11 days, 63 offices and flats of journalists have been stormed, as well as 51 offices and private apartments of chairs of cultural associations, human rights organizations, and writers’ unions, such as the EWC member UBW and its president, the poet Barys Piatrovich.

“Soon it will be the anniversary of the rigged elections, and Europe is still making Sunday speeches.

“Our colleagues are on the run, and Belarus is experiencing a drying-up of culture, intellectuals, scienctists, who are leaving their beloved country, terrified. If international politics continues to hold back so helplessly, it’s up to the book community to carry on the voices of Belarus.

“Publish Belarusian authors. Demand exile residences in your cities. Let them have their say in the free media. Award scholarships. A democracy is not destroyed overnight. Those who now keep quiet about Belarus are belittling the freedom of the word.” 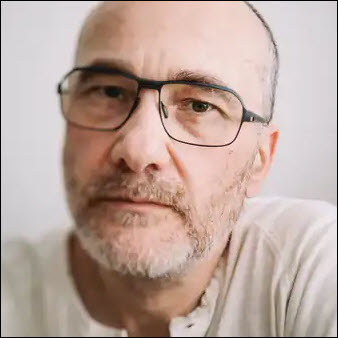 And from Dmitri Plax, Belarusian writer, translator, theatrical dramaturg and PEN Sweden board member, we read, “It’s very important to bring to public consciousness that the Belarus of today is a classical fascist state; and if the West will not take any real actions, it will be the end of Europe as we know it today.

“Belarus is a kind of a polygon, a lab for its big neighbor in the East. And if Russia is a completely fascist state it will effect all the world, of course, but in the first stage Europe. The ‘Belarusization’ of Russia is already ongoing, but not yet complete.”

In London, the Society of Authors has also issued a statement, saying that the society “stands with all Belarusian writers, artists and other cultural workers, joining the European Writers Council, Belarus PEN and PEN International in condemning the ongoing violence and repression in the country – including the news that the Belarusian Justice Ministry intends to close down PEN Belarus.”

It’s reported that the message from the ministry was received at PEN Centre Belarus on the same day that the organization released one of its detailed reports on cultural rights violations.

This new report from PEN Belarus is a first-half 2021 update on issues encountered and cites 621 violations between January and June. Like the first-quarter report we looked at at the time of Roman Protasevich’s arrest, six-month report pulls together what’s known of state actions taken against the community PEN represents and lists instances of censorship, “persecution for dissent,” and more. 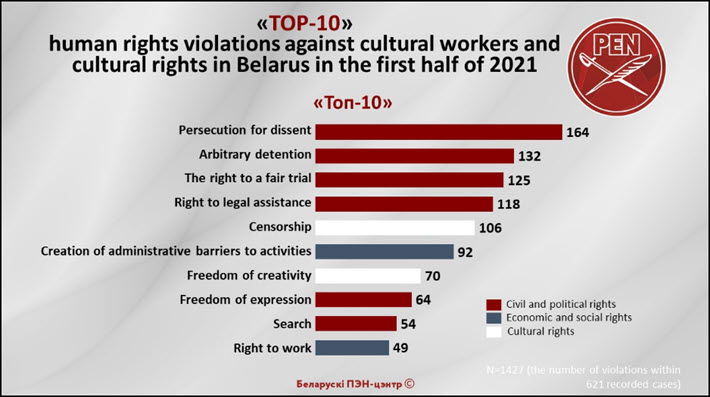 In a section on literature, the PEN Belarus staff writes, “Starting from January of this year, non-state publishing houses, publishers, book distributors, independent press, including those with content on cultural topics, authors, and often readers themselves, have come under pressure.”

As the PEN team writes in its report, “This is a tragic time for freedom of expression, freedom of creativity, freedom of opinion. The sociopolitical crisis is characterized by the violation of fundamental human rights and freedoms, persecution for dissent, censorship, an atmosphere of fear, and the expulsion of proponents of change.”