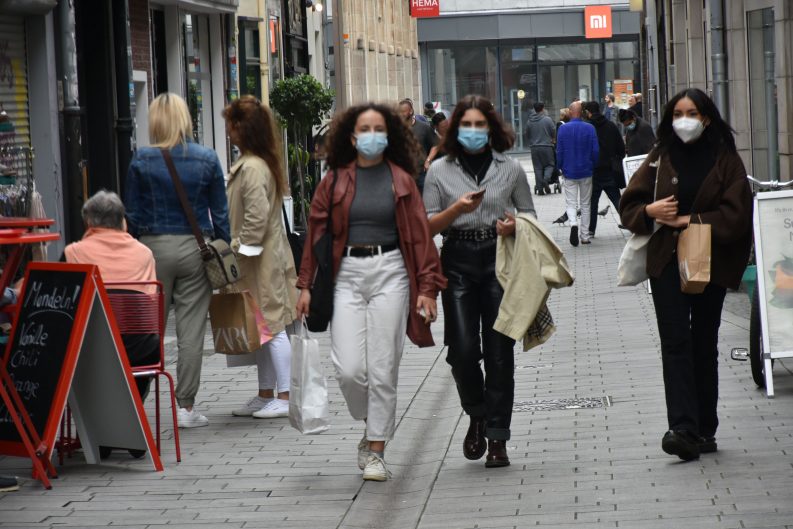 While online book sales have proved to be robust in Germany, city bookstores are challenged by urban areas described as ‘increasingly deserted.’ 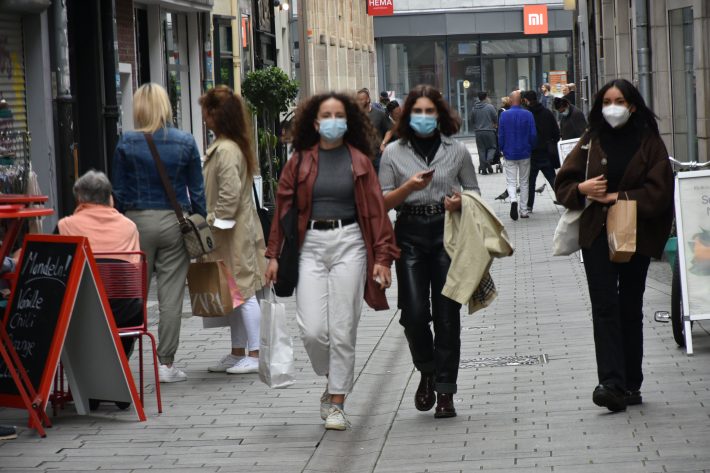 Consumers in Dusseldorf, June 27. Surveys for the new report show the German market’s young adults between ages 20 and 29 reporting that their reading activity increased by 32 percent in 2020. Image – Getty iStockphoto: Livinus

This morning (July 8) in Frankfurt, the Börsenverein des Deutschen Buchhandels, Germany’s publishers and booksellers association, has given a news conference at Haus des Buches, Book House in Braubachstraße, titled “The Book Market in the Pandemic: An Interim Report.”

As Publishing Perspectives readers will recall, a similar news conference in July 2020 and a follow-up in January have faithfully outlined the impact of the coronavirus COVID-19 pandemic on the German book market. Today’s information is another in this series of sessions with various news media and was led by Alexander Skipis, general manager of the Börsenverein.

That 22.9-percent shortfall in the first six months of this year has to do with extensive COVID-driven shutdowns in the spring. “Only in Berlin, Brandenburg, and Saxony-Anhalt were the bookstores open during this time,” the Börsenverein reports, “and depending on the region, ‘Click & Collect’ [at local bookstores] was not always allowed.” This contributed to the retail trade’s backlog of inventory between January and June.

When online sales and other channels are added in, the staff reports, the half-year balance looks better: Compared to the period from January to June 2019, sales in all channels are 3.7 percent behind.

Schmidt-Friderichs: ‘Interest in Books Is Unbroken’

Karin Schmidt-Friderichs, who heads the Börsenverein, told the press, “People’s interest in books is unbroken. Especially in times of crisis, people look for inspiration, well-founded and reliable information, and creative pastimes in books.

“Over the past 16 months, bookstores and publishers have worked with great commitment and creativity to ensure that people continued to have access to books, professional advice, and lively literature. The book trade has expanded its digital offerings and was able to increase its competitiveness compared to large online groups. Many retailers have intensified the bond with their customers and are now actively trying to catch up to reduce the sales gap from this year’s shutdown.

“Publishers are optimistic that with face-to-face events such as Frankfurter Buchmesse possible again, important stages for new books will return and the public discussion about literature will become louder.” 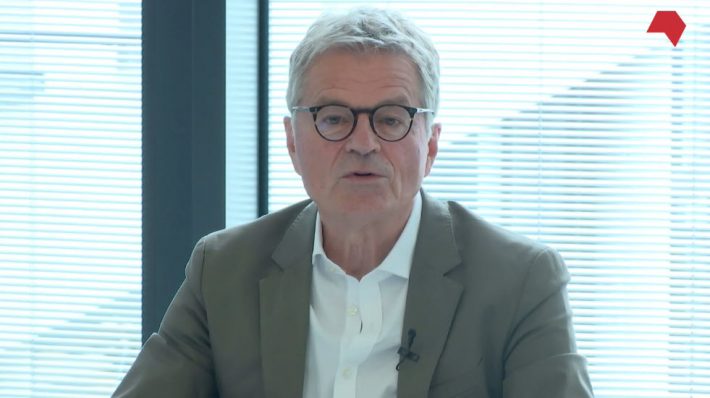 Skipis, in his overview, said, “Business with books was comparatively good, despite major hurdles in the pandemic. Many bookstores were able to increase their online sales significantly, but these are expensive because of the high process costs. The bottom line is that many have a negative operating result, and that’s coupled with generally low margins in the industry.

“We’re therefore grateful to politicians, especially minister of state for culture Monika Grütters, that they have given the industry strong support so far and that they will continue to help the book trade in particular.”

Not unlike the downturn for bookselling in the top-tier cities of China and other markets, however, the German marketplace saw distinct pullbacks in consumer activity in its urban hubs. The Börsenverein makes the point today that even before the onset of the contagion, the nation’s inner cities were “increasingly deserted” while some rural areas also tended “to lose their liveliness and diversity” during the height of the still ongoing pandemic.

“For a restart after the pandemic,” Skipis said, “a joint effort with the politicians is required. We need sustainable concepts to revitalize the inner cities. The book trade—with its unique combination of retail and cultural institutions, and its filigree network of more than 5,000 local bookshops—can play an important role here.”

He used a term from the urban planning industry and the American sociologist Ray Oldenburg, “third places,” to refer to community-building venues sought out by citizens between work and home: “Bookstores are ‘third places’ par excellence,” Skipis said. “Spaces for social exchange, togetherness, and public discourse.

“Here visitors can find inspiration, slowing down in a pleasant environment of openness. Together we can expand these spaces even further into cultural event locations that can develop further attraction and motivate people to come back to the city centers.

“It’s also essential for publishers,” Skipis said, “that politicians strengthen their framework conditions. In recent years, they’ve had to watch their rights being restricted more and more. With a view to the federal election in three months’ time, we therefore demand that politicians recognize the value of intellectual property and the work of publishers more strongly and promote their contribution to diversity and democracy.”

The Börsenverein has provided a round of statistics to members of the press today, and we’ll convey them to you here.

As was seen in so many world markets, reading itself became more commonplace during the pandemic year 2020, especially in times of spread-mitigation confinements.

The share of book buyers in the population, today’s information reveals, “has also remained stable despite the pandemic. It was 43 percent in the public book market in 2020 as it was in 2019.”

Today’s messaging also looks at the attrition of book buyers from the market. Some 400,000 buyers, the Börsenverein’s research shows, “were lost to the book market last year. This is the smallest decrease in the last 10 years, with the exception of 2018,” when slight increases were recorded. 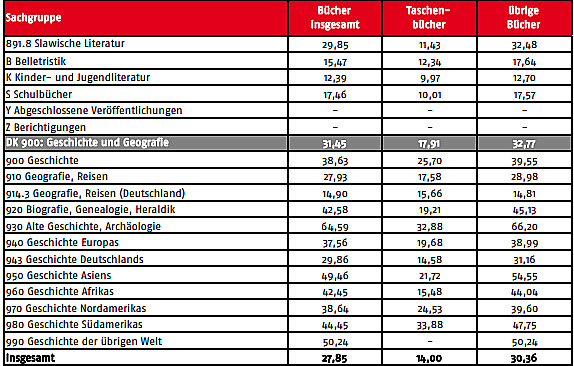 In fiction, which accounts for 20.1 percent of new publications overall, the decline was somewhat more pronounced at 4.0 percent.

The two leading sectors for sales of German titles into international markets were both down more than the 1.9-percent average.

The figures on the shares and changes in sales of the product groups as well as the sales development in 2020 come from the Media Control retail panel. The buyer figures, and figures on media usage as well as the ebook and audiobook numbers are from the GfK Consumer Panel MediaScope book. 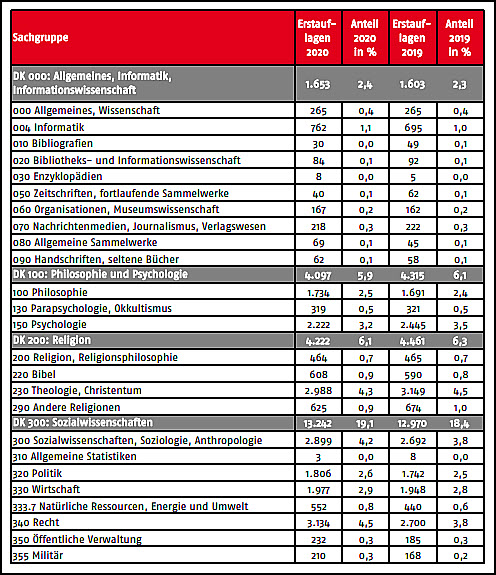 First-edition title releases in Germany in 2019 and 2020 by subject groups. Image: Börsenverein