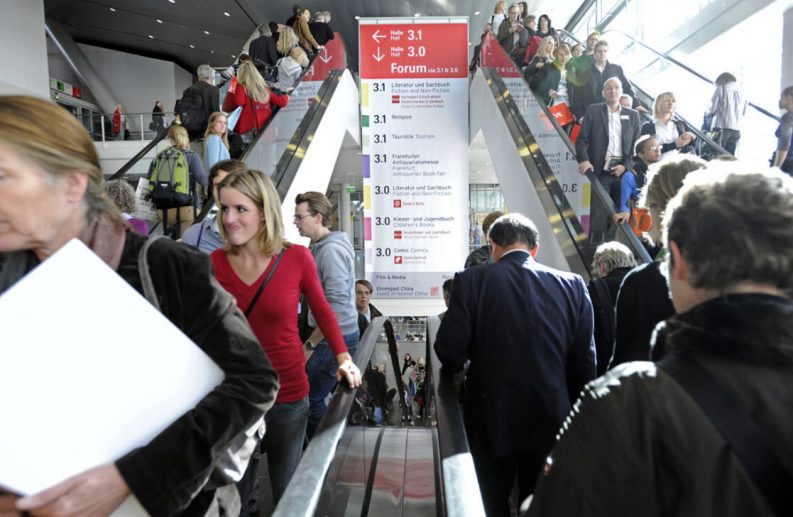 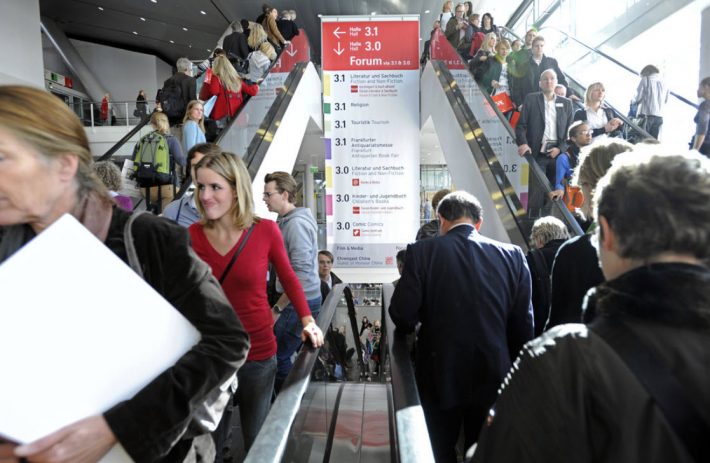 In Hall 3 at Frankfurter Buchmesse, a shot from the 2009 trade show. Image: FBM, Peter Hirth

As Publishing Perspectives readers know, Frankfurter Buchmesse‘s 73rd edition is anticipated to be a physical event running October 20 to 24 and utilizing the fairgrounds’ Halls 3, 4 and 6, as well as the Forum, the Festhalle, and the central Agora.

In an update to the news media today (July 7) carrying new “Re:Connect, Re:Boost” branding, Frankfurt organizers say that the on-site event is a go, subject to the pandemic’s progression and health and safety regulations in place. Thanks to special funding from Germany’s Neustart Kultur funding program (essentially “Restart Culture”), exhibitors’ registrations are backed by a no-risk guarantee that assures them they won’t lose money should the public health situation prevent the physical presentation of the fair as expected.

Ticket sales are to open in August.

And the public health news from Germany for the moment is relatively upbeat. As the BBC and other news media are reporting, Berlin today is lifting its previous ban on travelers from the United Kingdom, Portugal, Russia, India, and Nepal. Fully vaccinated visitors from these countries won’t have to quarantine, though unvaccinated people will be required to quarantine for up to 10 days. (With a negative test after five days, visitors can cut that quarantine time in half.)

At this writing, Frankfurt reports that 60 nations are represented by publishers, literary agents, service vendors, and relevant institutions now registered for a stand at the fair.

North America, Latin America, and Asia will have national stands in place, as will major European markets including France, Italy, Spain, the Netherlands, Scandinavia, and Central and Eastern Europe.

And nearly all the major German publishing groups and the full gamut of German-language literary and nonfiction publishers have registered to take part. Exhibition halls will include featured publishers from art and children’s books, religion, education and academia.

Those who have enjoyed hearing from authors on the fair’s traditional “Blue Sofa” (Das Blaue Sofa) will find it once more in Hall 3.1, curated as before by Bertelsmann, ZDF, Deutschlandfunk Kultur, and 3Sat. Those discussions, like many features of the fair, will also be streamed live. 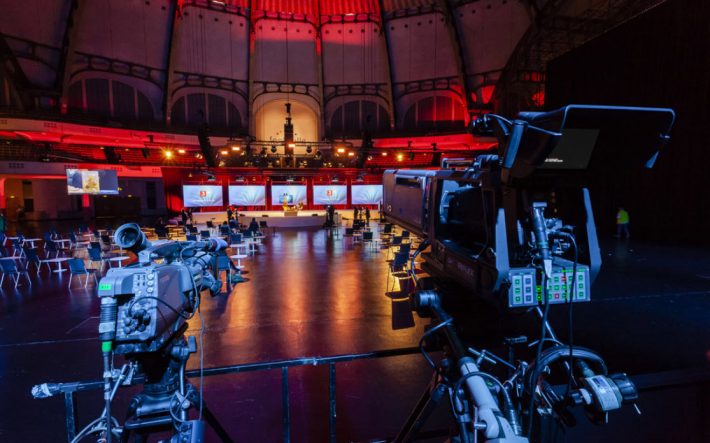 The ARD Book Fair Stage, a broadcast studio operated by German public television outlets—seen here in the 2020 edition of the trade show—will be back at Frankfurter Buchmesse in October, in the fairgrounds’ Festhalle. Image: FBM, Marc Jacquemin

In parallel to the physical edition of the trade show, a program of online offerings is being put together, of course. The digital programming is to include live broadcasts from Messe Frankfurt, online presentations of events held in the city of Frankfurt, and programming created expressly for the digital space.

As debuted last year, the ARD Book Fair Stage will be broadcasting from the Festhalle with panel discussions and book presentations examining analytical and aspirational issues spurred by the theme “How Do We Want To Live? Our Stage for the Future.” This brings in questions of sustainability, diversity, housing, work, education, and digitization, with wall-to-wall streaming of the entire output from the ARD Stage.

ARD, as Publishing Perspectives readers know, is a consortium of public-service broadcasters from various parts of Germany. Its specially staged events in a gleaming studio set last year in the domed Festhalle were the one point of in-person operation in an otherwise digitally rendered edition of the fair.

In addition to Guest of Honor Canada operating its pavilion and programming in the Forum on the first level, English- and French-language publishing houses from Canada will also be welcoming visitors at collective stands on the fairgrounds.

The full Canadian program, “Singular Plurality, Singulier Pluriel,” was held over from last year for this year’s staging, which will feature digital events as well as the physical pavilion as well as activities on the ARD stage and at various performance venues in the city of Frankfurt.

A list of new releases for Buchmesse currently includes more than 380 titles by Canadian authors or about Canada.

As those who follow our international awards coverage know, several honors are annually conferred during the course of Frankfurter Buchmesse. These include:

Capitalizing on last year’s digital programming, Frankfurt organizers say they’re working with MVB and the Berlin-based consultant Syzygy Group to create “digital business models for the B2B and B2C segments that can complement the on-site exhibition over the long-term.” The new partnership with the consultancy in Berlin is to run until 2024.

A half-day paid digital Frankfurt Conference program is set for October 11 in the week prior to Frankfurter Buchmesse, with several tracks. It’s expected to run from 1 to 6 p.m. CET that day. And “The Hof” digital networking event series is in the works, starting September 30,  as well, with a new addition called “master classes,” designed as one-hour sessions on best practices with interactive components. Details of these programs can be found here.

Exhibitors and customers who have opted not to have a stand at this year’s fair are welcome to be involved in these formats and to register as digital exhibitors in the exhibitor directory and include their events in the calendar of events.

Frankfurt Rights and Frankfurt Matchmaking, the online platform programs, will be available, of course, Frankfurt Rights now featuring more than 1,500 companies and some 10,000 individual buyer and seller profiles. The book database is reported to hold 400,000 titles.

The Matchmaking tool will again be open to those registered with a MyBookFair profile.

A Frankfurt CEO Talk program is expected to be part of the programming on October 20. 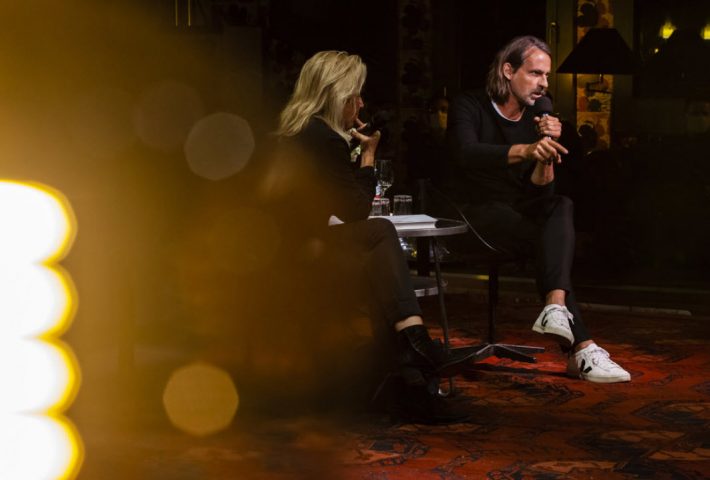 “In town,” Frankfurt’s public outreach program, BookFest, will again have five days of events including readings, concerts, discussions, workshops, per regulations at the time, in many venues around the city.

German-language authors from Austria, Switzerland, and Germany will participate in the “Open Books” program, which places literary reading events into various venues of Frankfurt, highlighting the German publishing industry’s new releases for the autumn. There’s an “Open Book Kids” edition of this on the weekend for children’s and YA titles, and discussions of recommended reading lists from the broadcaster SWR are anticipated to be tied into activities set at the German National Library and Frankfurt’s city hall.

The public will be invited to attend the show earlier than in the past, starting at 2 p.m. on Frankfurt Friday, October 22. Book sales are to be permitted on all days the fair is open to the public.

In preparation for the trade show in October, Frankfurter Buchmesse organizers have worked out a set of procedures aligned with COVID-19 regulations put into place by the state of Hesse and local authorities. Several points are being outlined today:

You can read more and monitor developments relative to safety precautions here.

At this writing, the 6:21 a.m.ET (1021 GMT) update of the Johns Hopkins Coronavirus Resource Center sees 3,739,651 cases in Germany’s population of 83 million, with 91,118 fatalities. These numbers place Germany at the current 12th place in the world for COVID-19 caseloads and 10th in terms of death tolls.

Even as the country opens its earlier ban on travelers from several nations, Reuters Berlin reports some concern domestically for Germans who are not following up the first of their two COVID-19 vaccine doses with a second. Caroline Copley and Andreas Rinke report, “Around 39 percent of Germans have now received the recommended two shots, while 56.5 percent have had at least one dose.”

As in many world markets, the presence of the extremely transmissible “delta” variant B.1.617.2 first detected in India is causing some increases in daily cases, following more than two months of steady declines. A separate Reuters report this morning cites the Robert Koch Institute registering “985 new infections to bring the total to 3.73 million, a rise of 177 cases compared to the daily increase a week ago.” The daily death toll shows some improvement, however, at 48 instead of last week’s daily 56.