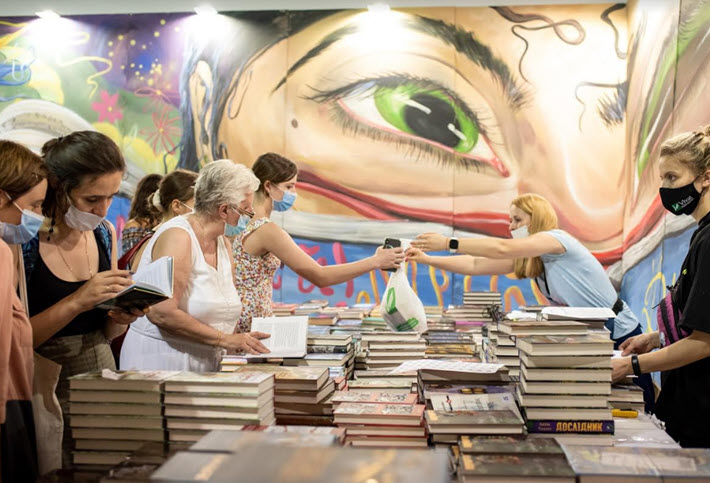 Kyiv’s Book Arsenal Festival has opened in a physical format this week, while international publishers and rights professionals are signing up for early July’s digital ‘Rights On’ business networking program. (Sponsored) 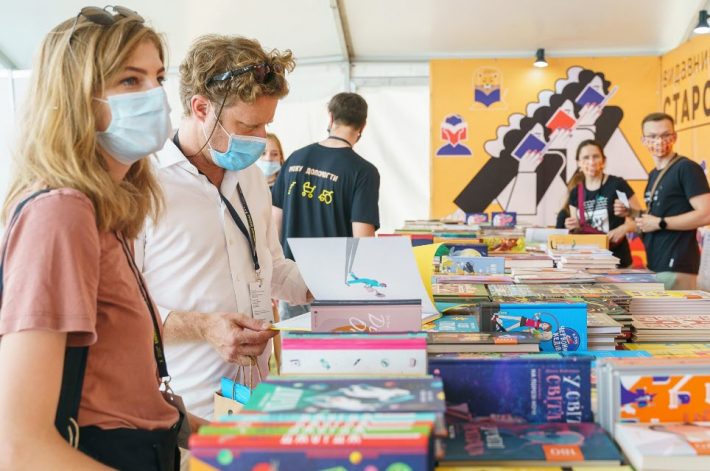 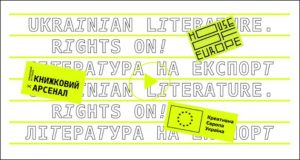 Of special interest to Publishing Perspectives readers in the translation rights area is a new series of B2B meetings being arranged now for July 5 to 7 for Ukrainian and international publishers and rights professionals. This is a second year of such digital exchanges held under the banner Ukrainian Literature: Rights On with an eye to encouraging more international publication of Ukrainian content.

Readers who would like to join the program and participate in its B2B meetings with Ukrainian publishers are asked to email bookexport@artarsenal.gov.ua.

There also may be translation grant support available again this year from the Ukrainian Book Institute, as was offered last year, and inquiries on this can be made at translateukraine@ubi.org.ua.

Publishing Perspectives readers may be reminded of May’s French Week program from Paris’ BIEF, another case in which a national market’s publishers’ community convened online with international counterparts to present work available for translation and publication in languages and territories beyond France. And earlier this week, Italian publishers engaged in a three-day set of bilateral meetings with French publishers for the same purpose.

All of this, of course, represents the rights-trading element of the international publishing business that’s been hobbled in many cases, not only by book fairs’ frequent need to operate digitally but also by travel restrictions that prevent rights directors, literary agents, and scouts from flying to events they might otherwise attend for trade-center meetings.

In 2020, the program tells us, the Book Arsenal Festival was glad to see 147 meetings go forward between Ukrainian and international publishers and agents. There were 37 non-Ukrainian participants involved from 24 countries, and organizers this year hope to surpass those figures, which broke all previous records for the market’s outreach programming. 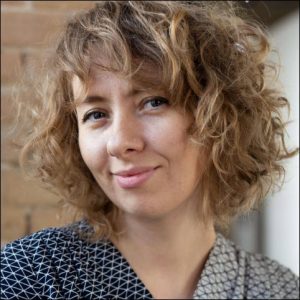 In a prepared comment, the program curator, Oksana Khmeliovska, is quoted, saying, “According to research by the Ukrainian Book Institute, the export potential of Ukrainian book publishing is between US$80 million and $100 million. In addition to the economic factor, it’s also important for us to promote Ukrainian culture abroad, to create ties between people and companies, and to build understanding between societies by means of books.

“This is an opportunity for Ukraine to be heard and understood.

“Last year, thanks to our program, Ukrainian book publishing was able to enter both large traditional markets, such as Canada, USA, France, and new, even somewhat exotic ones: Macedonia, Romania, Mexico, Greece, Finland, Denmark, etc. But we have no intention of stopping there.”

‘An Increase in International Exchange and Cooperation’

The Rights On program is supported by House of Europe, which is a European Union-funded program that supports 20 or more initiatives emphasizing professional and creative exchanges between Ukrainians and colleagues in member-states of the EU and the United Kingdom. 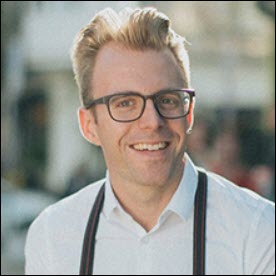 Christian Diemer, who heads the programming for House of Europe, is quoted, saying, “The times of pandemic and limited mobility require not a reduction, but rather an increase in international exchanges and cooperation. And when Europe, more than ever, needs to keep Ukraine in perspective, nothing can be better than the internationalization of Ukrainian literature and the professionals who create it.

Earlier this month, a series of interactive online lectures was held as part of the Rights On program. And you can see videos produced about the program and the Ukrainian literary market, with more such content anticipated to be coming to the Chytomo.com site, which is focused on Ukraine’s literary life. Ukrainian publishers’ catalogues can be found here.

And in addition, there are new videos being added, looking at various issues and topics in Ukraine literature and the Rights On program. They include a look at contemporary Ukrainian literature being read abroad and commentary from Ukrainian writer and philosopher Volodymyr Yermolenko on disinformation and the political realities of relations with Putin’s Russia. Included in Yermolenko’s 30-minute talk is information on the activist Oleg Sentsov and other jailed dissidents. 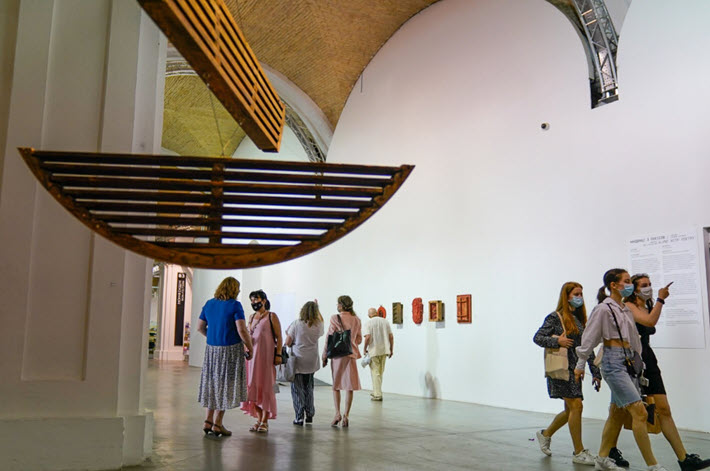 At the Mystetskyi Arsenal in Kyiv on the first day of the 2021 book fair. Image: Book Arsenal

The Book Arsenal event this week itself is a public-facing fair, and in 2019 drew 55,000 attendees to Kyiv’s Mystetskyi Arsenal exhibition complex.

The annual program—this year returning to a physical presentation at the stately arsenal facility—generally stages some 400 events and multiple exhibitions with up to 150 authors’ participation. The 2021 edition this week should see 261 events, some of them held outside the 34,000-square-meter complex in its central courtyard.

Content for young readers claims the largest part of the show and 56 events of the programming, some parts of which feature workshops for children and their parents. The children’s programming is set entirely outdoors, and organizers stress that their top priority is visitor safety. Some of the measures taken with this in mind include distancing between publishers’ stands and festival personnel controlling queues.

Tickets for attendees are being booked only online and sales control how many visitors can enter on-site at the fair during a given day. Once a ticketed attendee enters, she or he can stay as long as desired, until closing time daily at 10 p.m.

The Rights On project, then, functions as the professional program of this book fair, which won the 2019 International Excellence Award at London Book Fair. 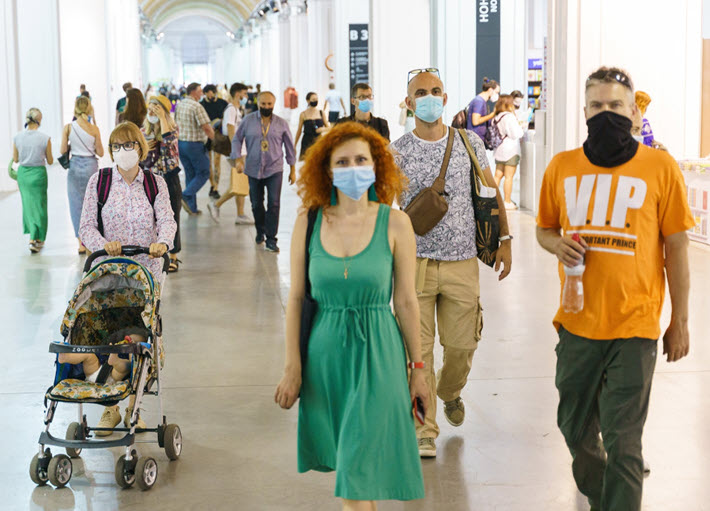 Returning to its physical format at the Mystetskyi Arsenal, the Ukraine’s Book Arsenal festival opens to masked attendees on June 23. Image: Book Arsenal

More from Publishing Perspectives on the Ukrainian market is here, more on rights is here.