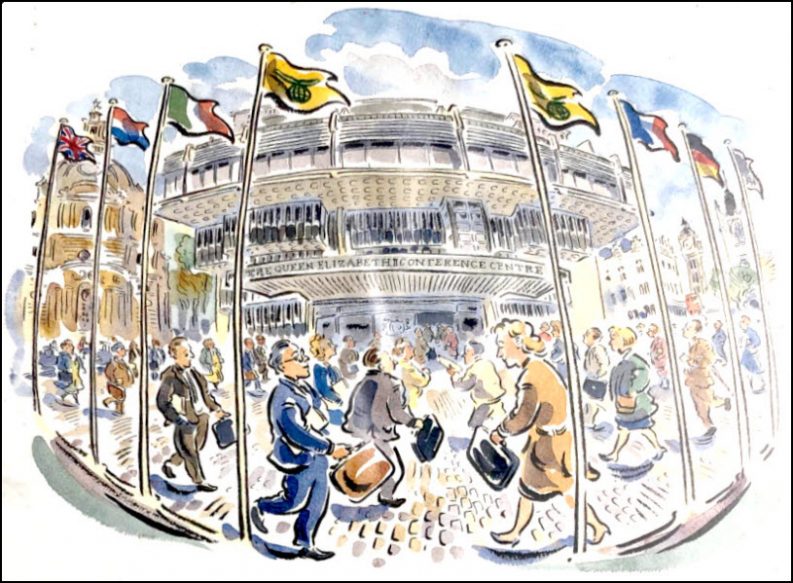 ‘As we become more interdependent,’ Richard Charkin writes, the IPA is positioned to ‘protect, support, and nurture’ world publishing. 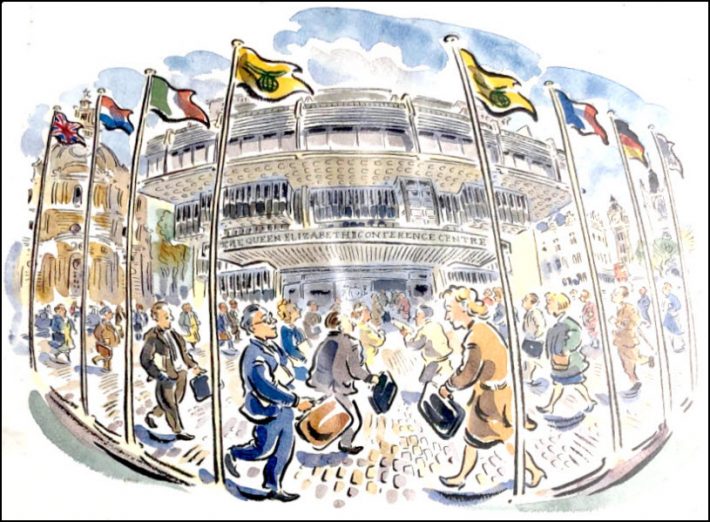 A detail from the cover of the International Publishers Association’s 1988 world congress, which was set at London’s Queen Elizabeth II Conference Centre in Westminster. Image: IPA

Editor’s note: This month, the International Publishers Association is marking its 125th anniversary. We’ve asked Richard Charkin—who was IPA’s president in 2015 and 2016—to give us his thoughts on the organization, which has membership based in Africa, Asia, Australasia, Europe, and the Americas. Since Charkin’s two-year term, the presidency has been held by Michiel Kolman (the Netherlands), Hugo Setzer (Mexico), and, currently, Bodour Al Qasimi (United Arab Emirates). —Porter Anderson

In 1896, a bunch of white European gentlemen held a conference in Paris to discuss matters of great importance for publishers. It was the first official congress of the International Publishers Association (IPA) and was a follow-up to the signing of the Berne Convention on copyright, agreed to by 10 countries in 1886. 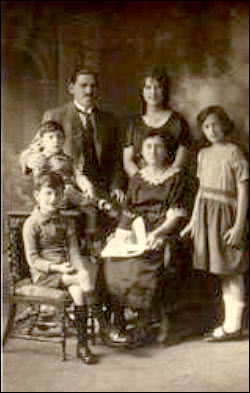 While this was going on in Paris, my paternal grandfather, then aged 21, was working as a hairdresser—we think—in a thriving mainly Jewish town called Drysa, now called Vierchniadzvinsk, a city in northwest Belarus.

I imagine that little could have been of less interest to him than the protection of creativity. His main preoccupations were to earn enough money to stay alive; read enough of the Torah to understand Jewish law; avoid whatever pogrom was on the horizon; and plan to find a better life in the West.

He succeeded and was naturalized as a British citizen some six years later, living in the East London district of Whitechapel and starting a wholesale tobacconist business. He also started a family, seen here. My grandfather’s arm is around my father, his youngest child.

There will be much learned and not-so-learned coverage of IPA’s history with which I cannot hope to compete. Notwithstanding, here are a few thoughts on why IPA is crucial to our industry. But first, some negatives

Every trade organization needs to charge its members in order to fund its overheads and its activities. It’s inevitable that some members feel they aren’t getting their money’s worth and either leave and/or set up an alternative organization to serve its subset of members.

In the United Kingdom, for instance, in addition to the excellent Publishers Association there are equally excellent alternatives such as the Independent Publishers Guild or Publishing Scotland.

Some publishers, understandably, resent paying multiple subscriptions and frequently opt for joining the smaller organizations rather than the umbrella ones.

The IPA is, in our world, the ultimate umbrella organization and there have been numerous spin-offs over the years, frequently causing some rancor and bruises along the way.

I’m thinking specifically of the STM (scientific, technical, and medical) breakaway and indeed the formation of the FEP (Federation of European Publishers), events in which the IPA leadership had to come to terms with new and vibrant organizations overlapping with their own. The Venn diagram is complex.

Now, the IPA today as seen, I must confess, through my eyes.

What a relief that the International Publishers Association has moved from its foundation as a white European male quasi-cartel. It took more than 70 years for the first non-European president to take office. That was Storer B. Lunt of WW Norton in New York [president from 1965 to 1968].

It took more than a century for us to welcome IPA’s first female president, the indomitable Ana Maria Cabanellas from Argentina [president from 2004 to 2008].

It’s taken a very long time, but we’re getting there. We’ll now have two female presidents and vice-presidents in a row, neither operating from a European or North American base. [Karine Pansa of Brazil is the current vice-president.] Thank the heavens.

Of course, some of the internationalization was painless. I don’t imagine Australia joining was ever seen as a problem, but more recently we’ve suffered serious disagreements about admitting a number of countries whose governments do not always share the West’s values and beliefs. Nonetheless, the IPA now represents 86 organizations from 71 countries and there are more waiting to become full members. Hooray. The more of the world’s publishing the IPA can represent, the more effective it becomes for all its members.

IPA is, of course, like all trade associations a lobbying organization.

Unlike many trade bodies, particularly international ones, it’s run on a bare minimum of staff and cost. The IPA bears no comparison with the powerful representatives, for instance, of the social media or pharmaceutical or energy or aviation sectors. Even so, the cost is not trivial and is constantly and correctly challenged by member organizations, by the officers, and by the management itself.

The essence of publishing is that we’re not wealthy like the oil barons or the billionaires of Silicon Valley. Our industry is funded by myriad tiny good decisions generating revenue and saving cost. The IPA should and does reflect this. 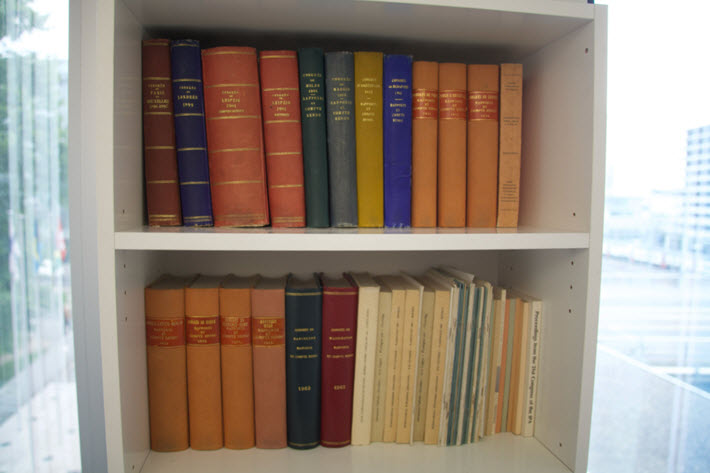 In spite of its parsimony, IPA has an absolutely central role in the future sustainability and prosperity of the publishing industry.

“Only by working together across cultures will we be able to see our way to a better industry in every respect and in every country.”Richard Charkin

Of course, at its center is representing our industry against the persistent, powerful, existential attacks on our lifeblood, the copyrights of our authors’ and illustrators’ creativity.

These attacks happen on a local level with piracy of textbooks, illegally distributed ebooks, and systematic photocopying in order to hide behind “fair-use” arguments. They happen on a global scale with outfits such as SciHub, making available free of charge the vast archive of scientific information on the ’Robin Hood’ justification of stealing to help the poor. These incidents have happened at scale with Google, for instance, threatening to digitize without permission the contents of major libraries.

Indeed, I think it’s the vast social-media companies that pose the greatest threats to our industry, even as they’re brilliant innovators, facilitators, and potential partners. They must be monitored and resisted when they become a threat to our industry’s very existence.

And there’s the issue of the freedom to publish. This has never been under greater challenge, in my memory at least. Technology is allowing governments around the world to scrutinize data, in order to find things they don’t like and then take action against those they see as miscreants.

But it’s not only governments. There are movements, even within our own publishing houses, in which people want to stifle publications with which they disagree. This is a particularly malignant form of censorship—not least because it results in insidious self-censorship—which needs to be strangled on a global basis because its means of transmission are the global social media.

In addition, IPA has a major role to play in leveling up publishing economies so that every country can develop its own support for its culture and knowledge. IPA can be a bridge between the developed and emerging economies like no other institution. It can support educational publishing, digital innovation, sustainability, and diversity issues by bringing members from around the world together at its congresses and in its various subgroups.

National publishers’ associations have a key role to play in their markets’ imperatives, but it’s only the IPA that, in my opinion, can protect, support, and nurture the world’s publishing as, in spite of COVID-19, we become ever more interdependent. Only by working together across cultures will we be able to see our way to a better industry in every respect and in every country.

My grandfather, working away in Drysa, would have been amazed at how much the world has changed, but I think he would have understood our global world. After all, he took advantage of it. He would also have understood the need to protect the written word, if only so that he could access the Torah, but probably also because of his commitment to education as a way out of poverty and literature as the highest form of culture.

I’m sure he’d be proud of what the IPA has achieved, and so am I.