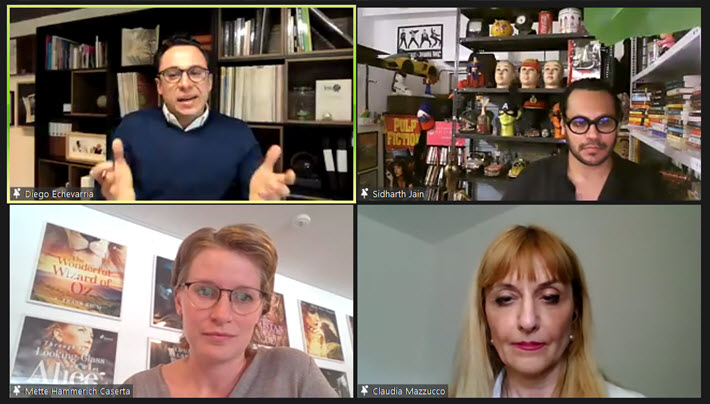 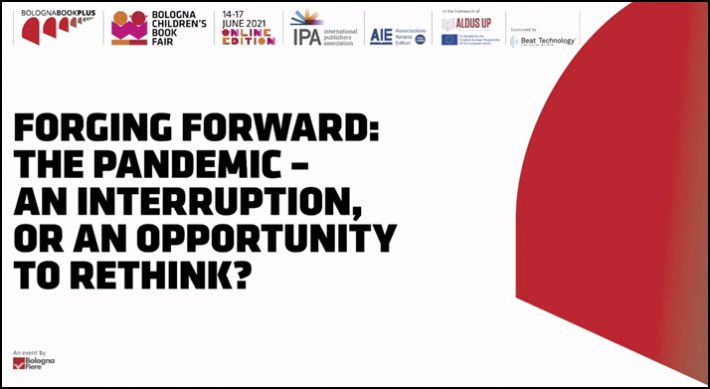 More of our stories on this year’s Bologna Children”s Book Fair:

The landing page of Bologna Children’s Book Fair this morning (June 14) has changed to a display of large characters with which a designer has spelled out “Online Edition,” each letter offering a link to various thematic and event areas of the trade show.

The 58th edition of the enormous industry show reports that between now and Thursday (June 17), it will present more than 250 events organized by the fair and by exhibitors, all online. The company anticipates a return to its physical edition next year, with dates set for March 21 to 24 and the emirate Sharjah finally in place as the show’s guest of honor.

In a regular year, Bologna will draw 30,000 or more internationally active professionals to its physical trade show, a public-facing exhibition and rights-trading program in Northern Italy. Last year, when this show became the first of the major international book fairs to attempt a digital evocation of itself as the coronavirus COVID-19 pandemic hit the Emilia Romagna region, the company announced that some 400,000 page views had been served, although many of those may have been opened by mistake, as would-be attendees tried to find programs and features they were looking for.

In a prepared statement for today’s opening, Bologna’s exhibition manager Elena Pasoli is quoted, saying, “The magic of Bologna Children’s Book Fair is its versatility, the incredible variety of content on offer, the continuous search for novelty, the different—only apparently divergent—voices and cultures that all come together on the Bologna stage. 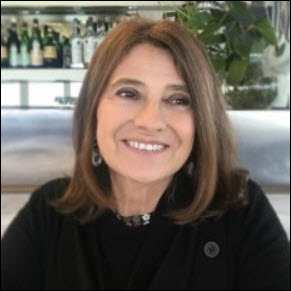 “Our commitment in preparing the second online edition has been exactly this: to reflect as far as possible the true essence of Bologna Children’s Book Fair, offering both a streamlined marketplace and an all-inclusive program of events, awards and meetings.

“I’m proud to confirm that we’re well prepared, following the many successful online initiatives of our new “Skill Box” activity area, a series of live international meetings available on-demand. In fact, the program has shown how digital activities together with an in-person event not only guarantee a brilliant current edition but also a great future as we continue the dialogue with the children’s publishing community and develop broader public interest.” 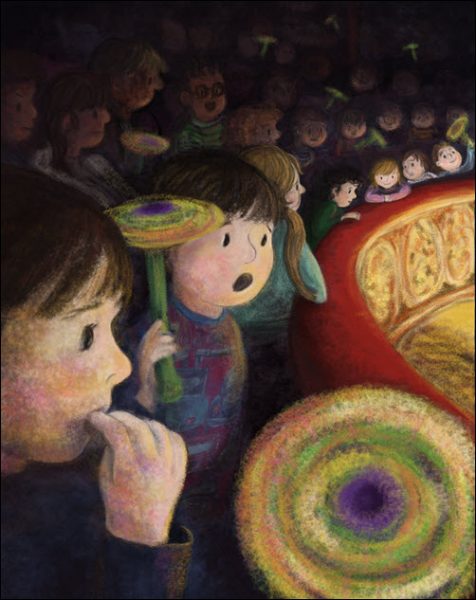 An image in the 2021 Bologna’s Children-Spectators exhibition, from ‘A Night at the Panto’ by Abigail Hicks. Image: BCBF

This year’s program is—as was last year’s—extremely complex. The site, once more, doesn’t offer easy navigation, something the team may be hoping to mitigate a bit with the weekend posting of that redesigned homepage. Even when on the ground in Bologna, the fair frequently baffles visitors as one of the most densely programmed publishing events in the world, and this characteristic has once more been transferred to the online edition.

There are, for example, “no fewer than 10 international illustration exhibitions,” the show informed the media on Saturday (June 12), “ranging from the 55th Illustrators Exhibition to the exhibition on how Dante is portrayed in books for children and young adults.”

While the Bologna Ragazzi book awards have been announced—you’ll find our coverage of those here and here—the Bologna Prizes for Publishers of the Year have yet to be named. And there are at least six more awards programs to play through, including the Altre Parole translation competition dedicated to Arabic “as a tribute to Guest of Honor Sharjah” which has been delayed in making its full appearance for two years.

Your best chance of finding something fast during a busy day in your office may be to start on the Bologna Children’s Book Fair Events Program page, which lets you sort by date and groupings of events. Scroll down below the date/event sorter, and you’ll find major events listings by day, as well.

The first of the big events this year—today’s (June 14) eight-hour “Forging Forward” conference—is probably the most anticipated event of the fair and represents the debut of the show’s new Bologna Book Plus collection of conference events.

This may be the first time a show has attempted a full-day conference, anticipating that professionals in their offices will be able to watch it while handling their usual workplace demands. And this event is where you’ll find the partnership with the International Publishers Association most evident as some of its leadership figures conduct parts of the program in recognition of the IPA’s 125th anniversary.

With Publishing Perspectives columnist and former IPA president Richard Charkin handling transitions during the day—see his piece on the anniversary here—a keynote will be offered by International Publishers Association president Bodour Al Qasimi, as will a speech from the IPA’s vice-president, Karine Pansa. A panel on climate issues features Michiel Kolman of Elsevier, another former IPA president.

And a newly made, thoughtfully paced and voiced anniversary video (embedded above) has been released by the association. Running almost seven minutes, the piece looks at key points of emphasis in the International Publishers Association’s development and work, and will be shown today as part of the program.

In a comment on her and Emma House’s direction of the Bologna Book Plus programming this year, Jacks Thomas is quoted, saying, “The online program for the inaugural Bologna Book Plus is designed to give voice to the wonderfully resilient, creative, and innovative book industry across the world.

“One day—which we all fervently hope will be soon—we can reflect upon this time as a game-changing reset for our industry, which, as ever, so pertinently reflects the wider world.

“As countries from A to Z and the broad industry ecosystem are all represented, we hope to take away important lessons learned and optimism for the next act, and I’m delighted that so many fantastic people are contributing their experience and wisdom to the ongoing debate.”

The Bologna Book Plus program also includes recorded and streamed events later in the week, among them, “How To Sell Rights and Understand Licensing in Children’s Books”; “How to Self-Publish in Italy,” and a translation forum presented in association with Words Without Borders.

Organizers of the Bologna program have dedicated this year’s digital edition of the trade show to the memory of Richard Robinson, the longtime chief of Scholastic, who died unexpectedly on June 5 at age 84. “He was always a great friend of Bologna and loyal supporter of innovation, new initiatives, and Bologna Children’s Book Fair’s vision,” reads a dedication inscription on the show’s homepage.

Our coverage of reactions to Dick Robinson’s death is here. 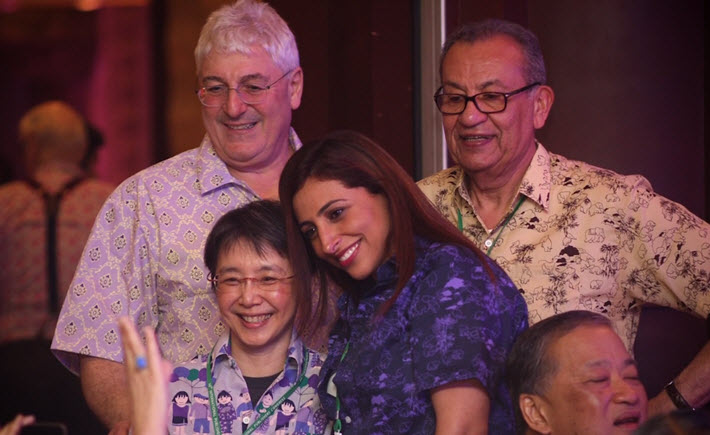 In this image from the International Publishers Association’s new 125th-anniversary documentary video are Bodour Al Qasimi, center, IPA’s current president who speaks in today’s opening Bologna Book Plus conference. She’s pictured with publisher Travsin Jittidecharak of Bangkok. At left is Richard Charkin, a former president of the IPA who also speaks in today’s program in the digital edition of Bologna Children’s Book Fair. At top right is Ibrahim El Moallem of Shorouk Press in Egypt, and at the lower right is MR Sukhumbhand Baribatr, former governor of Bangkok. Image: IPA