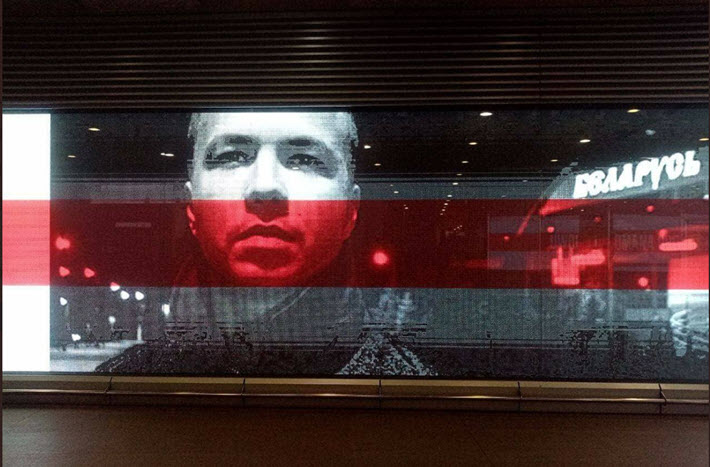 The Börsenverein des Deutschen Buchhandels has partnered with Frankfurter Buchmesse and nine other institutions on behalf of the detained Belarusian opposition journalist Roman Protasevich.

In the Warsaw metro, a call for Roman Protasevich’s release. Image: Wiktoria Bieliaszyn on Twitter

Petition: ‘Criticism Is Fundamental to a Free Society’

The demand, Mr. Lukashenko, release Roman Protasevich and Sophia Sapega immediately! from the Börsenverein des Deutschen Buchhandels, has coincided with a terrible point of punctuation. Another Belarusian opposition activist, Stsiapan Latypov, has stabbed himself in the throat with a pen during a court hearing today (June 1), according to Andrew Roth’s report at The Guardian, “after claiming investigators had pressured him to plead guilty or face his family and friends being arrested.”

A report moved by the Voice of America has corroborated details of the event, in which Radio Free Europe/Radio Liberty video footage showed Latypov lying on a bench in the defendant’s cage in court. He was pictured being moved to an ambulance, the Associated Press citing the Viasna 96 Human Rights Centre in Minsk saying that he was put into an induced coma in hospital. CNN’s Frederik Pleitgen has reported that following surgery, Latypov’s condition is reported to be non-life-threatening.

The courtroom incident today raises new fears for the safety of Protasevich and Sapega, who were arrested last week after Minsk forced down Ryanair 4978 en route Athens to Vilnius, while the plane was in Belarusian airspace. That incident led European countries to bar flights by Belavia, the Belarusian state airline, to block their own planes from flying in Minsk’s airspace.

In its new statement, the Börsenverein—Germany’s publishers and booksellers association—announces its petition directed to Angela Merkel, Germany’s chancellor. The petition has been created in association with:

At this writing, the petition has an impressive 38,562 signatories and has set a goal of 50,000. Its text is available in both German and English, and it can be signed internationally.

Skipis: ‘A Serious Violation of Freedom of Speech’ 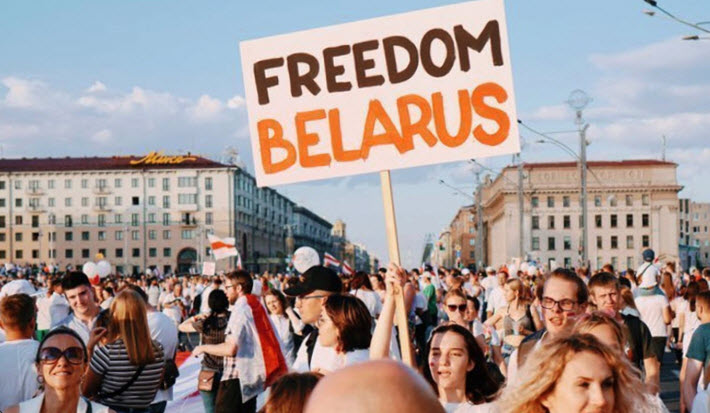 Image: From the #FreeProtasevich petition newly launched by the Börsenverein des Deutschen Buchhandels, Frankfurt Book Fair, and other organizations and institutions

Alexander Skipis, general manager of Börsenverein, says, “The kidnapping of the Belarusian blogger and his partner is an incredible encroachment on the lives of two young people and a serious violation of freedom of speech. With harassment and arrests like this, president Alexander Lukashenko is gradually trying to silence the critical and warning voices in Belarus.

“We cannot and will not accept that.

“We demand the immediate release of the two detainees and an end to the reprisals against opposition members, journalists, and cultural workers in Belarus.

“Freedom of expression is a human right: it is the basis of a free, democratic society and it is non-negotiable. If we stop standing up for it and all those from whom it is taken, we will lose it.

“That’s why we will ensure that acts like these are repeatedly brought to the attention of the public. ” 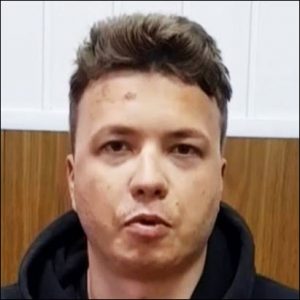 Roman Protasevich, from a video released by Minsk one day after his arrest. The video is believed to have been a forced confession

As for Protasevich, Samuel Osborne writes for The Independent, “Sviatlana Tsikhanoushkaya [the leader of the opposition] said a lawyer who visited Roman Protasevich and his girlfriend, Sofia Sapega, said he was fine ‘but it is doubtful, because for sure he was tortured, for sure he was beaten.'”

Publishing Perspectives readers will recall last month’s inaugural “Freedom of Expression Week” created and led by the Börsenverein with the hashtag, #MehrAlsMeineMeinung, essentially meaning “My opinion is not the only opinion.”

The organization has capitalized on the nationwide energy created by that new program and its Charter for the Freedom of Expression.

Now, in the new petition, the Börsenverein and its associate organizations write:

“We cannot and will not accept your behavior, Mr Lukashenko. We will ensure that acts like this are not forgotten and that they are repeatedly brought into the consciousness of an international public. By taking action against these two young people and a large number of others, you are trying, Mr Lukashenko, to gradually silence the critical and admonishing voices in Belarus. You will not succeed in this in front of the world. Criticism is fundamental to a free, diverse democratic society. Freedom of the word is a human right and is not negotiable.

“We appeal to the federal government [of Germany] and the political forces in the EU to stick to their course and to stand up for freedom of expression in Belarus consistently and sustainably. We call on them to defend the human right of freedom of expression and not to weigh it against geostrategic and economic interests and to relativize its central importance in negotiations.

“As an association of the German book industry, the Börsenverein des Deutschen Buchhandels is committed to freedom of opinion, information and freedom of the press, because freedom of expression is the basis of a free, diverse, democratic society. This is under increasing pressure worldwide.” 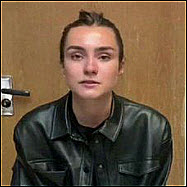 In reports from the region, The Times’ Marc Bennetts in Moscow reports that the Belarusian foreign minister has said that Sapega, Protasevich’s girlfriend—she is a Russian national—could be pardoned or sent to Moscow to serve a prison sentence.

BBC News has reported that she’s being held for two months in a pre-trial detention center in Minsk “as a preventive measure,” according to her attorney, Alexander Filanovich. Russian embassy officials are reported to have visited her in custody and “said she was in good health and had not complained about her treatment.”

When the couple was intercepted by Lukashenko’s force-down of the Ryanair flight, Sapega was traveling with Protasevich back to Vilnius, where she studies at the European Humanities University. They had been in Athens for an economic forum Protasevich attended.

The petition effort is being hashtagged #FreeProtasevich #FreeBelarus and #FreeWordsBelarus. 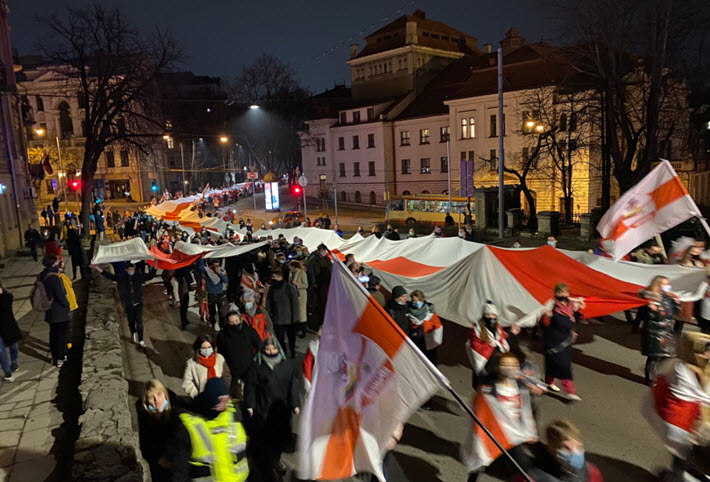 The Belarusian opposition activist Roman Protasevich–now detained by Minsk–tweeted this image of a Belarus opposition demonstration in Lithuania on March 25, writing, ‘What beauty there is in Vilnius tonight!’