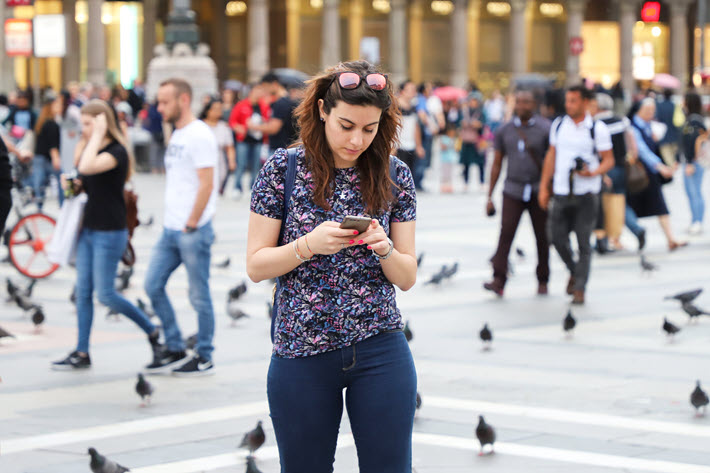 The latest “Digital Consumer Book Barometer” was released Thursday (June 24), mostly with confirmation of the many reports and analyses of the last nine months or so regarding the “digital acceleration” seen in parts of world publishing during 2020 amid the still-ongoing coronavirus COVID-19 pandemic.

This 29-page “barometer”—a number of reports in the international industry use this term, including the French industry—is based on aggregated sales data from six markets: French-language Canada; the German-Austrian-Switzerland German-language triad referred to as DACH;  Italy; Spain; Brazil; and Mexico.

First seen in 2018, this report has been put together again by Vienna-based consultant Rüdiger Wischenbart and this is apparently the first of two parts in this year’s edition.

In this part, the focus is on “the fundamental transformation of digital book markets,” and an upcoming follow-up in September is to have what Wischenbart describes as “deep dives into developments in specific genre categories” and “the continuity of trends” into the first quarter of 2021 in digital consumption.

Information for these reports comes from Bookwire—which has distributed the report to Publishing Perspectives—as well as from DeMarque/Libranda and Spain’s the International Publishing Distribution Association, led by José Manuel Anta, plus Edigita and Readbox. While the set of regions is limited—and The Netherlands, once a part of the barometer report, is not here—the sponsoring partners are the ones whose interests decide the markets observed.

In this first part of the two-part release, the emphasis is on digital, pricing, and subscriptions, briefly described as:

The report does point out that the distinction between credit subscriptions and all-you-can-read or -listen-to subscriptions  is taken into account. This reflects, for example, recent discussions of Audible’s subscription plans. While Audible is often criticized for being credit-based in most markets, in Mediterranean markets, it’s taking the flat-rate route instead because existing offers established the “unlimited” form of subscription first. 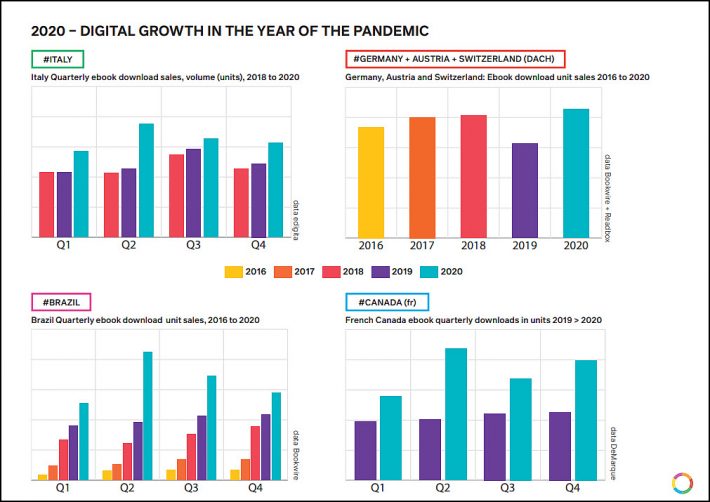 If you, like many professionals in world publishing, have spent hours in digitally transmitted conferences, seminars, and lectures in the past year hearing about the acceleration of digital-format adoption driven by the confinements of spread-mitigation efforts in so many markets, this barometer’s overall messages will arrive with all the shock value of news that a revolution started in France in 1789.

During lockdowns, as we know—with bookstores closed (and especially early on when public health officials thought that COVID-19 was transmitted on surfaces which might be books’ covers and pages)—many consumers made the perfectly logical move to buy digital reading products. In some cases, these were first-time buyers of the formats. In others, these were “Okay, these things aren’t so awful, after all” readers. In still others, these were regular digital-product consumers simply intensifying their spend during what some people seem to have experienced as “spare time,” although not all of us were the beneficiaries of this alleged “spare time.”

Overall, the barometer doesn’t add a lot to that basic and much-recited story. The barometer effort also shows some of the difficulties in multi-market comparisons. In the above chart, for example, Italy is viewed between 2018 and 2020, the German-language countries and Brazil between 2016 and 2020, and French-language Canada in 2019 and 2020. Each region’s patterns are interesting enough in themselves but we’re reminded of the essential wisdom of the proposal from the Association of Italian Publishers (Associazione Italiana Editori, AIE) and Aldus UP effort to establish some common sets of  statistical tracking in Europe, at least, so that more apples-to-apples comparisons are available across markets.

The barometer’s bottom line, of course, is that, “By any measure, 2020 saw an overall uptick in e-commerce worth of several years, within just a few months.”

Pricing: ‘Clear Balance and Stability’ in Some Markets 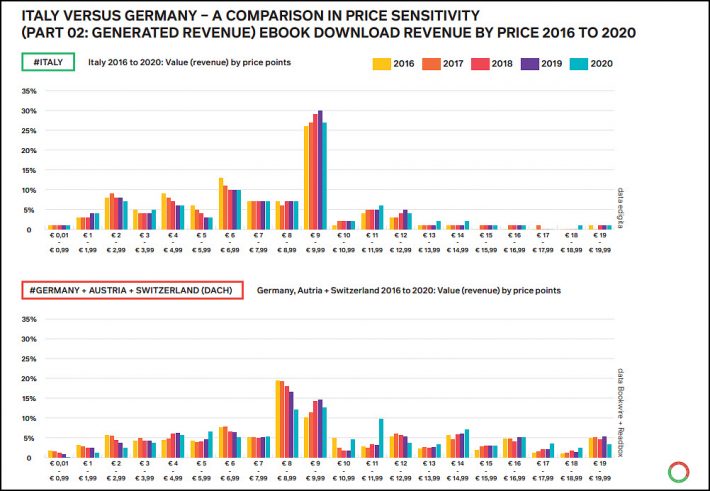 In this chart, the €9 price point in Italy and the €8 and €9 points show durable stability from 2016 through 2020 in terms of revenue. (Another chart shows these price gradations in Italy and Germany in terms of units.) Image: Digital Consumer Book Barometer 2021

“Pricing,” Wischenbart writes, “has been regarded as offering little space for experimentation, especially in price-regulated markets. However, publishers had begun already for both ebooks and audiobooks to find ways in using low-price offerings of backlist titles to promote new works of serial fiction for a while.” And this, of course, plays into the generally seen trend toward readers accessing backlist, particularly as many publishers delayed or cancelled outright some of their planned releases amid so much retail uncertainty.

Of course, pricing trends aren’t easily compared across markets. In the charts above, Italy and Germany show price points as gauged in terms of revenue with lasting stability between 2016 and 2020. While in the chart below, the wider spread of markets in the study’s purview indicates, among other things, how Brazil’s ebook pricing had begun a precipitous slide in 2019  and the pandemic conditions don’t seem to have helped. 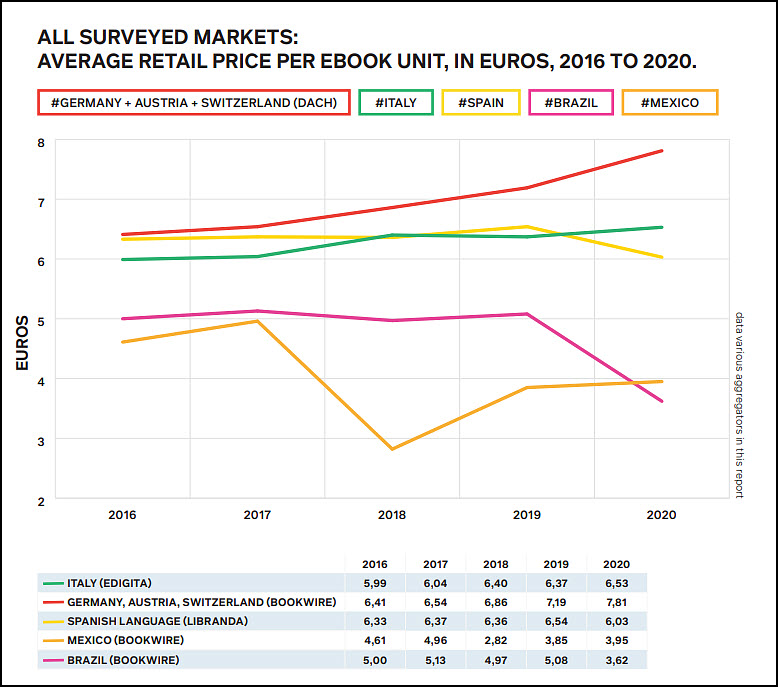 The Spanish-language growth markets are the most popular to observe in terms of Audiobook consumption at the moment, as has been indicated in Bookwire’s earlier “All About Audio” and other digitally produced programming this year. The barometer report also looks at Spain’s and Latin America’s markets in this regard—it’s a major expansion region for the study’s survey sponsor Bookwire.

Here, the most valuable thing this report has to say is about the progress subscriptions are making. While the more frequent, rolling survey programs such as the Association of American Publishers’ StatShot have been indicating sustained elevated levels of commerce in the digital formats, the barometer agrees with this in “a new fundamental level for ebook consumption [that] seems to be here to stay.”

More interest might be found in the report’s considerations of how in the Spanish-language markets, “Ebook subscriptions which had a very modest market penetration until 2019, in 2020 rose twice as much, year-over-year, by comparison to ebook download sales.” Once more looking for comparative coherence, this report chooses to look at unit sales over revenue, writing, “The Spanish language markets are traditionally primarily driven by sales of print books, while ebooks account for not more than 5 percent of all revenue.

“The surge in digital however seems to hint at new audiences that could be reached during the pandemic, which can be seen as a trend that might be both promising and lasting.” Both library lending and subscriptions are described as seeing “a spectacular push” by the report. 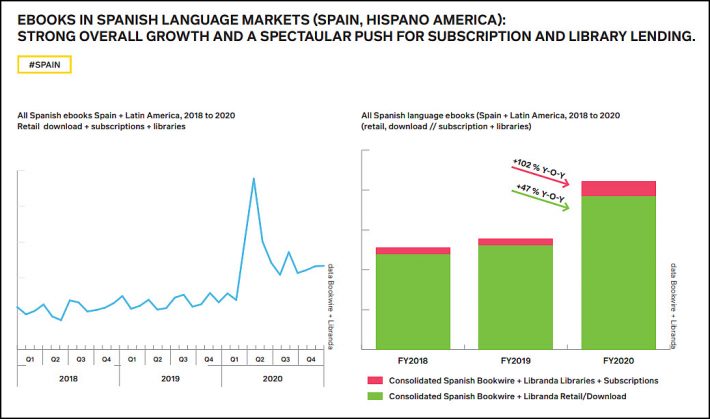 And in the area of audiobooks, an interesting look at genre preferences is found late in the report, in the German-language markets, in the below chart representing tracks or chapters consumed from music-streaming platforms during 2020, with adult fiction eventually overtaking children’s content during the course of the pandemic year 2020. 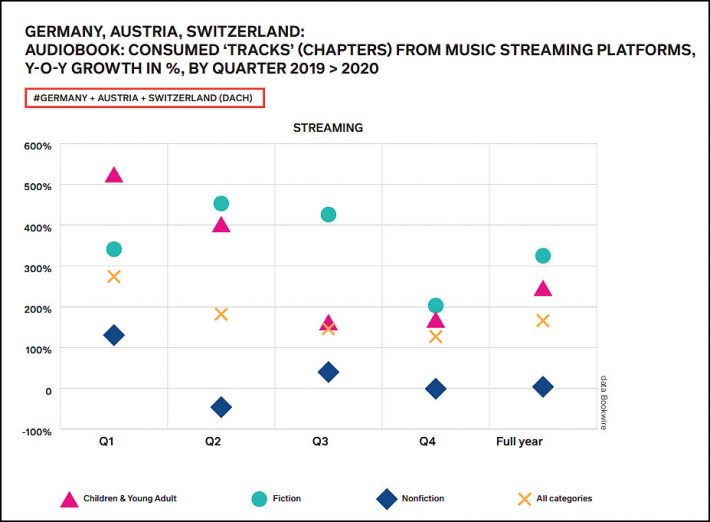 You can download the barometer report in full (PDF) from Bookwire here.