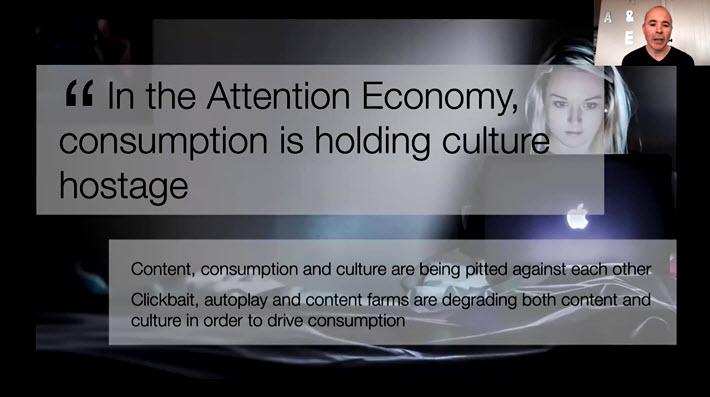 From the macro to the micro, Bookwire’s second ‘All About Audio’ program made its key points with high-level observations on consumer behavior and entertainment content.

The attention economy in a saturated consumption sphere. A slide from MIDiA’s Mark Mulligan at Bookwire’s ‘All About Audio.’ Image: Bookwire

We continue today (June 8) to look back at some of the events you may have missed in the Zoom-collision of events that were scheduled by publishing event producers in the latter part of May.

The second All About Audio program from Germany’s Bookwire was hosted by the company’s articulate London-based audio chief Videl Bar-Kar. The half-day event started this year with a bigger-picture, more theoretical view than were on the inaugural program last year.

In place of the 2020 program’s audiobooks survey work of Dosdoce’s Javier Celaya, for example, this year the event was started by Mark Mulligan of MIDiA Research—less All About Audiobooks than a comprehensive survey on a broader, multi-industry plane.

If it ever existed at all, an era in which publishing didn’t need to understand that its products must float in a fast-deepening sea of entertainment distractions is long over. Hence, when Mulligan produced a slide indicating that “you were underperforming” if  your piece of the action wasn’t increasing by 12 percent during the coronavirus COVID-19 pandemic, that slide did not have books or even audiobooks on it.

“Audio” was the closest category into which a publisher’s listenable wares had to fit. 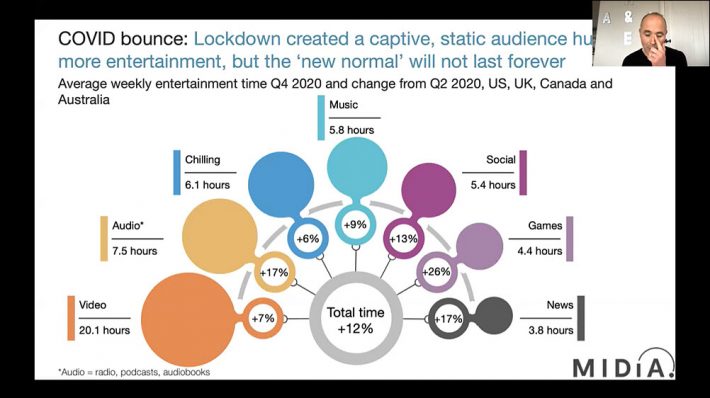 From Mark Mulligan’s presentation at ‘All About Audio.’ Image: Bookwire

Music, it turns out, Mulligan said, underperformed, at 9 percent growth, while gaming soared to a 26-percent gain. Audio, which includes much more than audiobooks, was at 17-percent growth.

And publishers might be pleased to remember that the Audio Publishers Association has just reported that it saw audiobooks grow by 12 percent in revenue in 2020.

On the other hand, for all the excitement about growth numbers in publishing’s downloadable audiobook sector, the March StatShot from the Association of American Publishers showed audiobooks to be just 7.9 percent of the overall trade book market’s action.

However, here’s something Mulligan reported that may not please our podcast enthusiasts. In his chart below of changing audio consumption between the pandemic second quarter and fourth quarter of 2020, audiobook consumption grew 49 percent, while podcast consumption rose by a comparatively less robust 35 percent.

And that, Mulligan said, caused him to do a double take. 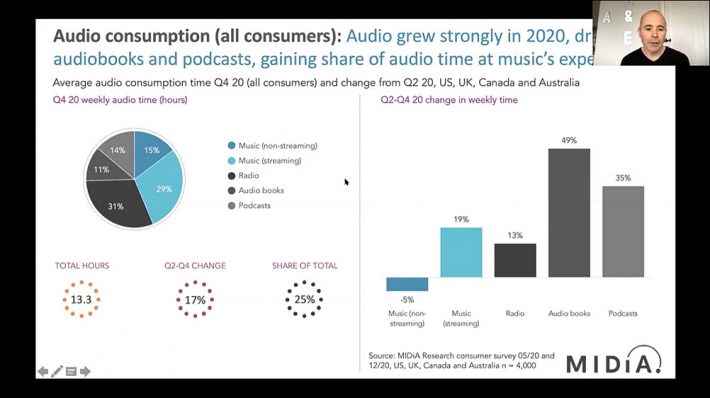 In this slide from MIDiA’s Mark Mulligan, we see the audiobook consumption in the United States, United Kingdom, Canada, and Australia between Q2 and Q4 2020 growing at 49 percent while the podcast growth came in at 35 percent. Image: Bookwire

So surprised was he to see the audiobook growth so much stronger than podcast growth, Mulligan says, that he had the data rerun to be sure the analysis was right.

It was accurate. Audiobooks also “far outgrew music streaming among all listeners.”

The question is, then, why would this be the case? Mulligan’s answer is that users had more time on their hands at home with commuting and other elements of time saved. A consumer could say, “I can commit more time with an audiobook,” Mulligan said, “taking time to listen to it over a period of time.”

Publishers will recognize this as the narrative imperative. Much music can be listened to in short bursts, turned on and off as needed while moving around during a day. A book, by comparison, is more palatable if you have a block of time to focus on a story or a nonfiction argument without having to jump in and out.

He said he also thinks that audiobook usage won’t return to pre-pandemic levels, but will stay at higher rates because of new habits formed during the pandemic.

What’s at issue here is the “attention economy,” something we find a recurring theme in our coverage.

“When we’re online,” Mulligan said, “we spend three types of currency. The first is our money. The second is our data, not always willingly so. And the third is our attention. The attention is spent filling time we used to deal with traditional media, and that really was the engine room of growth for digital entertainment.

“But until the pandemic, we didn’t essentially reach peak. You don’t spend your time waiting for a bus or a train just staring across the road or at the other platform. You spend your time looking at your screen. We fill our dead time by doing stuff on our smartphones.

“Growth prior to the pandemic was becoming quite binary. A minute gained somewhere was a minute lost” somewhere else. But in the rise of the attention economy, Mulligan said, the negative reflex has been seen in people trying to game it. As an example, he mentioned how you can be reading a “really respectable” news article, “perhaps about the Palestinian conflict,” only to find “five weird tips for a flat belly” advertised in the middle of it. “That’s an example of the lowest common denominator being created to get just a fraction of your attention to generate some fractional amount of ad revenue.”

In audio, he talked about how “songs are being written for streaming.” Short intros that sound like a chorus. Everything sounds like a hook, all designed to grab the attention with something sticky. “In streaming music, we see the songs have been written for streaming.,” Mulligan said. The intros are short and they sound like a chorus. And the “interconnected nature” of today’s digital environment means, he said, that you’re always just a finger-swipe away from changing your media type as entertainment behavior becomes “deeply intertwined.”

Two final key points in Mulligan’s overview had to do with music and gaming in particular. In music, there’s a big groundswell of new content being created as people use the tools of digital sound production. And in gaming, Mulligan’s suggestion was that publishers should go to game creators and ask how their (publishers’) audio products could be used to make games better. There’s synergy there, in other words, but it needs to be explored by colleagues to see what the best relationship of the books world might be to the games world. 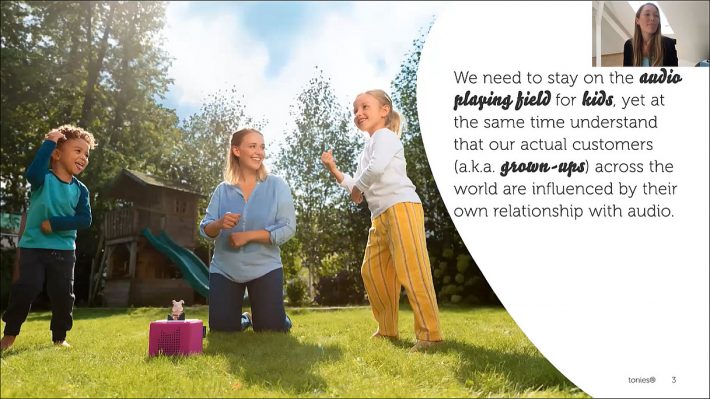 A slied from Shelly Sundag’s presentation for Toniebox at the ‘All About Audio’ 2021 conference. Image: Bookwire

While Mulligan had set out a smart list of elements that could have organized the rest of the program, the agenda was devised to work primarily from that point as a series of product presentations. This can be useful to attendees who want to know about one or more of the products being presented, and will always, of course, be less useful to those who are more comfortable working at the macro level at which Mulligan was speaking.

First came Shelly Sundag, who gave the Bookwire audience a look at the “Toniebox”, which she said was about “wrapping high-tech innovation in a squishy soft box with funny ears.” The idea is that young children will use these boxes from the company (created in 2016) to “capture kids’ hearts and minds” without screens.

Going “beyond the audio file,” she said, “is what’s key for listeners.” She pointed to an advantage here being that children can create and combine ancillary activities with their use of the box.  A small figurine acts as a key, used between the two “ears” on the top of the Toniebox to unlock sound which is streamed from the cloud. Parents by the box and then “Tonies”—these figures—to get the content a child will access when inserting a figurine-key.

Sundag pointed out that generational differences are at play. “What ‘audio’ is for kids,” she said, “is much broader” than it might be for adults. The Toniebox plays music, dialogue, and also allows users to create their own content, she said. Its benefits have to do, according to Sundag, with letting kids be in control of their audio, the mystery of how the sound comes from the box, the chance to share sound with each other and adults, and so on. 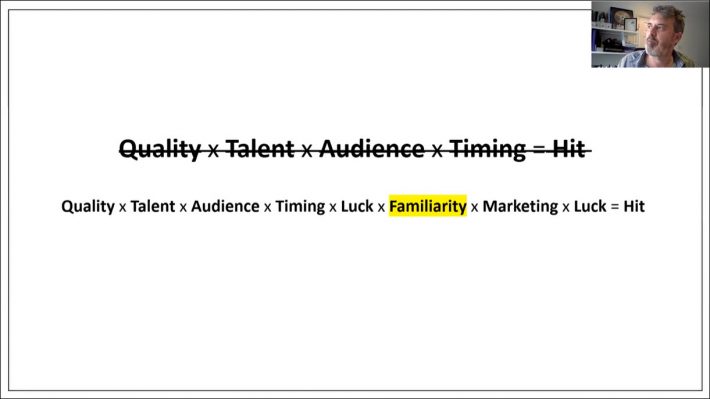 Steve Carsey talks about elements of good audio work during the ‘All About Audio’ program. Image: Bookwire

Steven Carsey, managing director of Bertelsmann Content Alliance UK’s podcast company Storyglass in London noted that there are more than 2 million podcasts, “growing every week in a very noisy world” and then admitted that he doesn’t know a secret formula for making, as his session’s title had it, “The Next Blockbuster Audio Original.”

His session turned out, therefore, to be one of those that feels like a bait-and-switch. Having raised the question of what makes a hit, he had to concede there’s no good answer, which of course is true for any effort in art or entertainment–misfires and surprise successes are the way of the media world.

His points about what should go into good audio original work were certainly logical if not exceptional:

Added to those factors soon were:

These are things all familiar to publishers and the ways of books’ performance on the market. “If anyone can define the DNA of the hit, they’re probably delusional,” he said, and then went through several successful productions with which he’s been involved. If you were there to hear people talk about their work, this was a good session to hear. Despite Mulligan’s earlier data showing that podcasting may not be growing by the leaps and bounds that so many of its fans assert it is, Carsey said he feels there’s room for a lot of growth to be had in them. 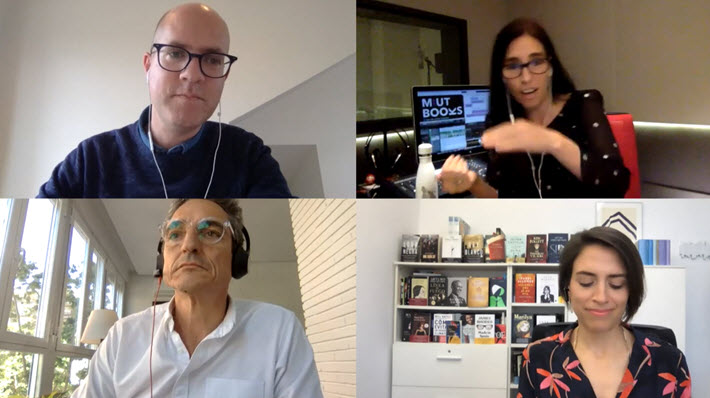 In considering what to choose from the program you can see in its recording, we can also commend three more sessions that rounded out the Bookwire “All About Audio” program.

Bar-Kar led an informative talk with three players in Spanish-language audio, a huge, growing market, just two days after it released a big, 70-page report on Spanish-language digital publishing. We recommend you check our writeup of the new Evolution of the Digital Market report for 2021, which includes a link to the report itself. Then you can listen to these speakers talk about their work in the Spanish-language markets, a linguistic territory in which Bookwire itself has for years been rapidly expanding its distribution presence.

A brief product presentation came from Google’s head of publishing for Europe, the Middle East, and Africa, Ani Attamian. In terms of genres, Attamian said, the best for auto-narration are nonfiction, of course, and those without artwork, formulas, or visual aids.

And Albee Dalbotten Romero, the publicity director of Libro.fm, was on hand to talk up that offering’s app to “empower bookshops” by offering “a very analog business a digital offering.” Available only on iOS at this point–but with “Android coming,” as so many of these offerings always promise–this one lets customers use credits in-app to make audiobook purchases under the aegis of a local bookstore that the customer chooses to support.

You can review the entire program, which runs three hours, 40 minutes, at this link, provided by Bookwire. 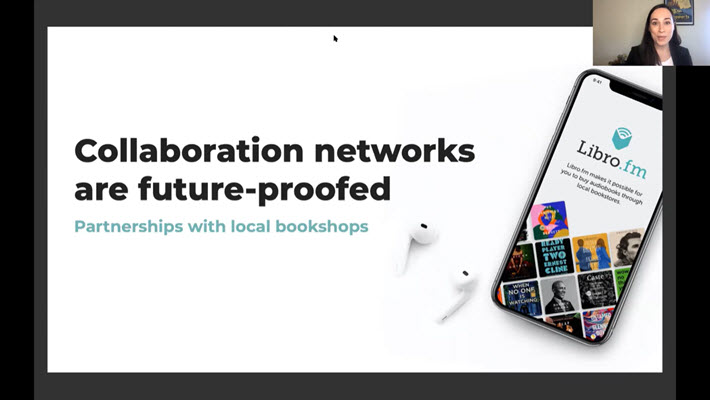 From the Libre.fm product presentation at Bookwire’s ‘All About Audio’ event. Image: Bookwire