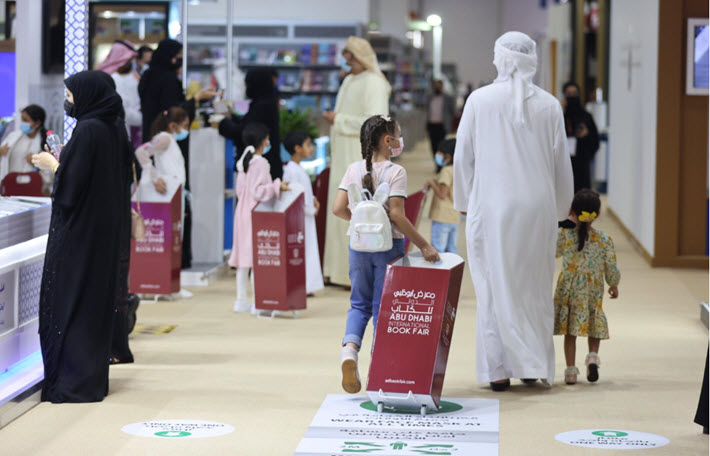 The Abu Dhabi International Book Fair’s 2021 programming featured 229 sessions during the week, engaging 315 speakers, their comments streamed from the show. 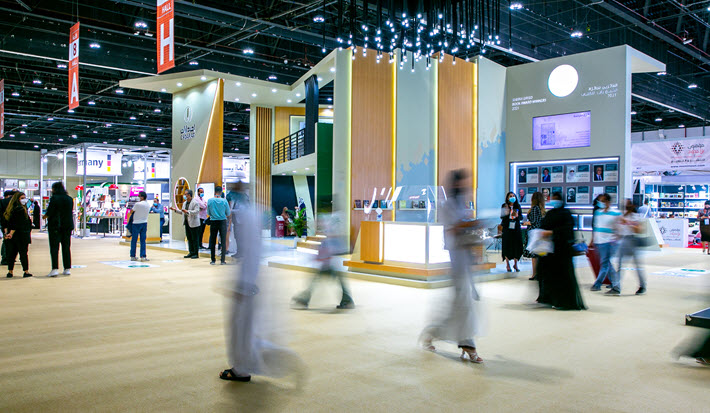 A 20-Percent Jump in Book Sales

As Publishing Perspectives readers know, the Abu Dhabi International Book Fair fair this year presented a physical exhibition hall and programming as well as a digital presentation of much of its programming, a welcome return to business for publishers and other book business players in the Arab world whose revenues were badly impacted by the coronavirus COVID-19 pandemic‘s closure of many regional book fairs.

Having been dark in 2020, as most world publishing events were forced to be, the Abu Dhabi fair today (June 8) has reported that its 2021 book sales jumped 20 percent over those of 2019.

Organized by the emirate’s department of culture and tourism and managed by the  Abu Dhabi Arabic Language Centre, the fair drew 889 exhibitors, organizers report today, 662 of them from 46 international markets outside the United Arab Emirates.

In terms of programming, organizers say that 229 sessions were held during the week, with 315 guests and speakers participating, some of them in person at the show’s Main Stage, and some in digital formats, both recorded and live.

On the floor of the 2021 Abu Dhabi International Book Fair, after children were allowed to join parents at the physical presentation of the fair. Image: ADIBF

One thing that may have helped this strong level of sales could be a change in COVID-19 guidance halfway through. Those who saw the floor of this sprawling show at Abu Dhabi’s National Exhibition Centre in the early part of its May 23-to-29 run may remember sparsely trafficked aisles. The initial entry requirements for attendees were that they must be fully vaccinated and 17 or older.

But in the final days of the program, children were in the hall, no doubt boosting sales at this public-facing fair.

Organizers tell Publishing Perspectives that this was thanks to a change in public health regulations. “Due to the success in adhering to the COVID-19 guidelines and offering a safe environment,” we’re told in a statement, “the regulations were revised to allow children starting Wednesday (May 26).” That change in guidance produced a busy weekend closing weekend, organizers say, with families in attendance as in non-pandemic circumstances.

This, then, accounts for the imagery we’ve had with children and parents perusing books and pulling along the red book trolleys they use to carry the books they pick out for themselves—a signature image from this event each year.

Dr. Ali Bin Tamim, chair of the Abu Dhabi Arabic Language Center and secretary-general of the Sheikh Zayed Book Award, is quoted in today’s media messaging, saying, “The Abu Dhabi International Book Fair has long provided a platform for meaningful discussion of issues facing the publishing industry. We’re delighted that engagement with the fair and its offerings was higher than ever, as this year’s 20-percent jump is our most dramatic spike in sales of all time.

“This serves to highlight the continued importance of literature and reading in the Arab region.”

In addition, as we reported, the emirate’s crown prince, Sheikh Mohamed bin Zayed Al Nahyan, ordered that 6 million UAE dirhams (US$1.6 million) be allocated for buying books and educational content at the fair.

And just as the show opened, it was announced that all publishing houses participating in the event will pay no fees for their stands and presence as exhibitors. This kind of support for publishers clearly paid off in a successful event. 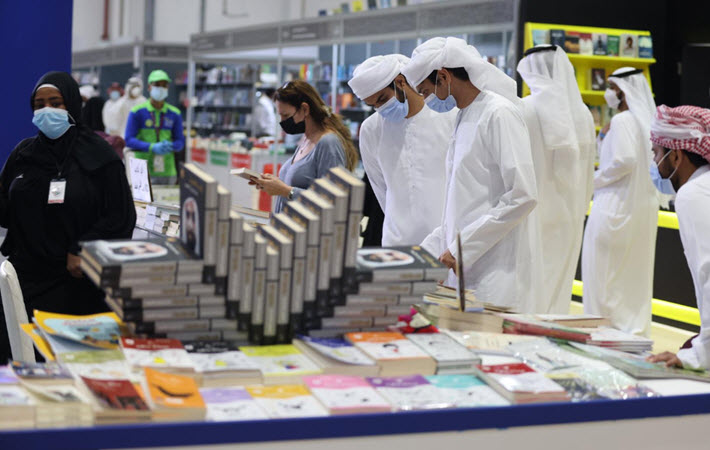 Guest of Honor Germany contributed extensive programming to the event and maintained a stand on the floor, while planning to return in 2022 for a large-scale guest of honor program and pavilion in a fully physical format. 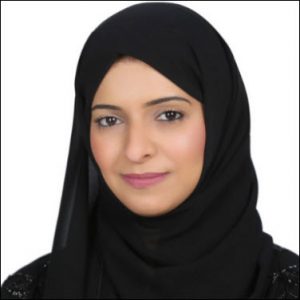 As is customary, both the London-based International Prize for Arabic Fiction and Abu Dhabi’s 15-year-old Sheikh Zayed Book Award were fully represented with ceremonies and speaking events for their laureates, and programs at the Main State repeatedly drew standing viewers as well as those seated in specially spaced arrangements.

Mouza Al Shamsi, acting executive director of the Abu Dhabi Arabic Language Centre and the director of the book fair, is quoted today, saying, “Given recent global circumstances, we’re beyond proud to have been able to host an in-person 30th edition of the fair, and I’d like to extend my thanks to all participants and visitors for their cooperation and diligence in observing the precautionary measures ensuring a safe, and successful event for all those involved.

“Above all, we’re grateful to our frontline heroes who made it possible for us to host a cultural event of this scale.” 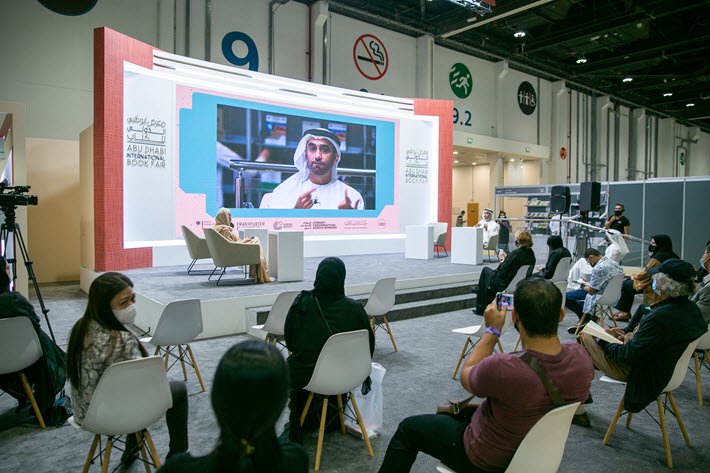 More on the Abu Dhabi International Book Fair is here, including interviews, perspective pieces, and news from the show’s events.

For your free copy of our specially produced 2021 Abu Dhabi International Book Fair Show Magazine, click here. There’s a video look at what’s in this 30-page magazine embedded below.