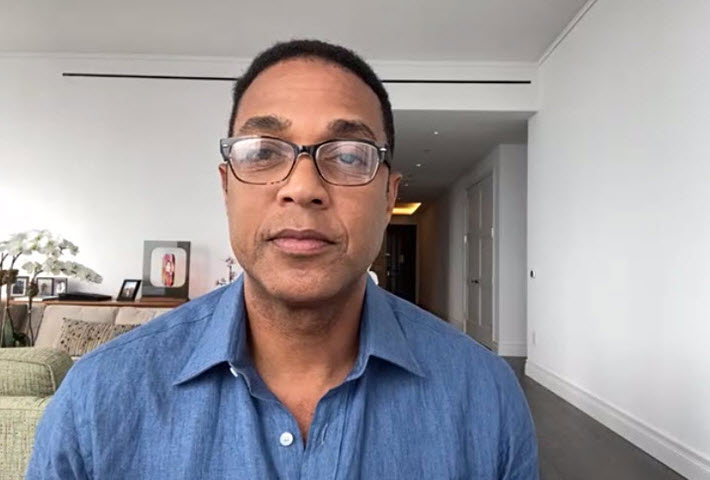 Three speakers were heard on issues of racial and social justice, monopoly power, and the evolution of very big tech in book retail. 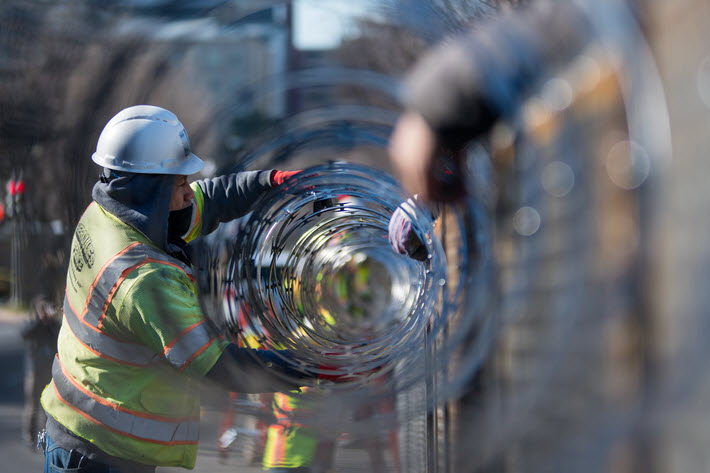 Barbed wire is placed near the US Capitol on January 19 before the January 20 Biden inauguration. Sen. Amy Klobuchar talked at the Association of American Publishers of the inauguration being staged with ‘spray painting on the columns and makeshift windows behind us.’ Image – Getty iStockhpoto: ALF Snaiper

See also our coverage of the leadership elements of the Association of American Publishers’ annual meeting. That story is here.

After members of the Association of American Publishers‘ (AAP) leadership spoke in the organization’s 2021 annual general meeting on June 2, the digital presentation offered keynote comments from author-anchor Don Lemon and longtime Amazon journalist Brad Stone, as well as an award-acceptance message from the Minnesota senator and author Amy Klobuchar.

CNN anchor Don Lemon (Don Lemon Tonight), who is touting his March 16 release, This Is the Fire: What I Say to My Friends About Racism (Hachette/Little, Brown), has found himself a bestseller in part because he has cultivated an iconic, timely position in elements of political and social life today, specifically in the evolving contexts of systemic racism and threats to constitutional democracy in the United States. 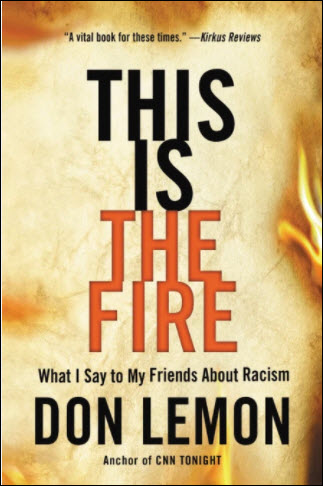 His nightly commentary reflects his emphasis on a time of compelling dynamics and quickening change. “The creative process for me,” he said, “really is one of urgency.”

Lemon is an author whose writings blend personal reflections and contemporary challenges. He knows, he said, that “writing books is not for sissies,” because the struggles of personal life in a case like his have coincided with his public role. He was writing his book, he said, while covering the Trump administration, which he calls an attack on the Constitution.

“And it’s still happening today,” he said, in the peculiar symbiosis of the Mar-a-Lago post-presidency and Trump’s base.

Publishers “should be cognizant of the passion and the urgency of authors of color and writers and artists from underserved communities of people.”Don Lemon

“So forgive me if I can’t wax poetic about my creative process,” Lemon said. “My creative process is urgency. It’s now. This is the fire, I am in it,” he said, citing James Baldwin’s The Fire Next Time as an inspiration.

Lemon was reflecting a drive that many in publishing have felt in their work, evidenced by pressure placed on publishing-house managements by employees relative to book acquisitions, political values, and social imperatives. Faced with efforts by the Trump administration to counter the freedom to publish–the freedom of expression–many in the book business have felt a growing urgency in the industry’s role and potential.

“I think publishers should be cognizant of that same ‘fierce urgency of now,'” Lemon said, using Martin Luther King’s phrase. “They should be cognizant of the passion and the urgency of authors of color and writers and artists from underserved communities of people who are literally dying to have their stories told by people who look like them, and who have shared experiences.

“Publishers can and should do their part in correcting the wrongs of an American history, a history that’s been whitewashed and used to elevate people–white people–and denigrate or diminish Black people, brown people, Native Americans.”

Adding that “there’s no nuance anymore, especially in cable news and in our politics,” Lemon said that what books do is “contextualize and offer nuance in a way that I can’t give on my platform on CNN.

“They’re each equally valuable” as a medium, he said, “and they provide two different things and two different resources that I think are necessary.” 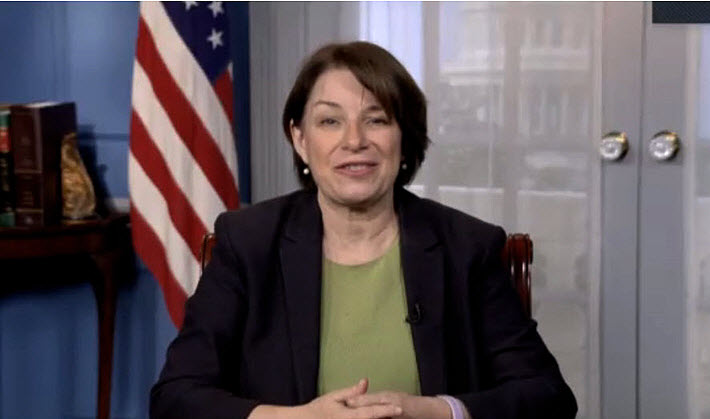 Sen. Amy Klobuchar (D-MN) accepted the association’s 2021 Award for Distinguished Public Service at the meeting in a message she had recorded for the event. 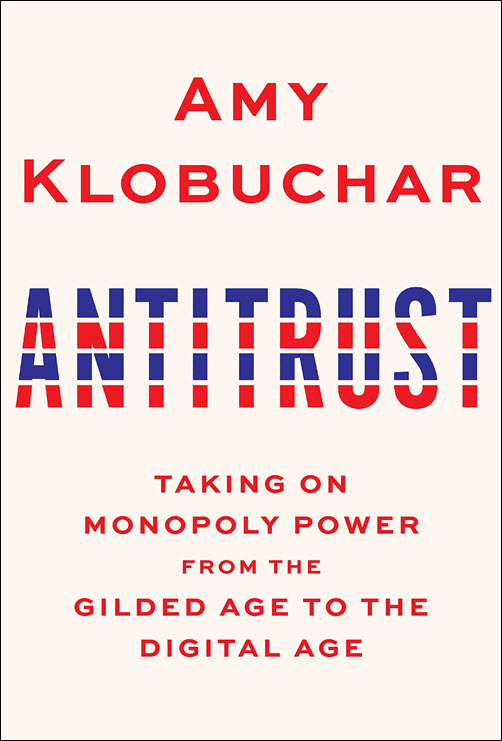 The chair of the Senate Judiciary Committee’s subcommittee on competition policy, antitrust, and consumer rights, Klobuchar’s newest book is  Antitrust: Taking on Monopoly Power from the Gilded Age to the Digital Age (Penguin Random House/Knopf Doubleday), published on April 27.

Referencing the domestic terrorist attack on the US Capitol by pro-Trump insurrectionists, Klobuchar said, “That night, my fellow senators and I knew we had to return to the chamber, to do our jobs and count the electoral vote. That’s what we did literally at 3:00 in the morning. It was Sen. [Roy] Blunt [R-MO] and myself and vice-president [Mike] Pence, who walked through the broken glass. And we were honored to announce that Joe Biden and Kamala Harris had been elected by the American people.”

Recalling the January 20 inauguration of Biden at the Capitol “with spray painting on the columns and makeshift windows behind us” covering the damage left by the mob, Klobuchar said that we’re now in a position to see ‘the lighthouse on the horizon,” as the American vaccination program races toward Biden’s July 4 deadline.

But the senator had recorded her statement with her book’s topic in mind. “One of the key issues we face is competition,” she said, and the anticipated antitrust concerns around Amazon weren’t the only points on her mind. Publishing’s own moves toward consolidation played into her comments.

“What I want to do is make sure that we have vigilant antitrust enforcement.”Amy Klobuchar, (D-MN)

“Competition in our economy,” she said, “the increasing dominance of big tech–which I know is a concern to AAP member publishing houses. Publishers are the drivers of culture, education, and scientific communication. But as you all know, there are serious concerns about consolidation in the publishing industry due to a series of mergers and acquisitions that combined major publishing houses.

“This consolidation–as well as, of course, the major issues with big-tech–[is a] reduction in publishing competition [that] has been not good for most authors, whose earnings have fallen by 42 percent over the past 10 years.

“And it’s not just the publishing industry,” Klobuchar said. “We see our competition problems in everything from big tech to pharma to cat food to caskets. Protecting competition, and ensuring opportunity and fairness for all Americans, lies at the very foundation of our country’s economic prosperity. Competition is a big part of America’s story, and it’s a big part of my story as a public servant.”

Describing her work in antitrust issues—and touching on news publishers and the use of their content by platforms including Google and Facebook—she described “what monopolies do, and whether it’s gatekeepers like Amazon when it comes to retail, or whether it’s Apple when it comes to app stores.

“I don’t want to destroy these companies,” Klobuchar said. “I think they’ve given us some great, great products, and there’s so many people who work there.

“But what I want to do is make sure that we have vigilant antitrust enforcement. It may mean divesting assets. It may mean putting conditions on, so people can’t engage in preferencing their own products or exclusionary conduct. We can have more competition and a brighter future for everyone. And that includes in book publishing.”

Thanking the association for her award, she quoted Hubert Humphrey, saying, “If you don’t write your own history, other people will write it for you.” 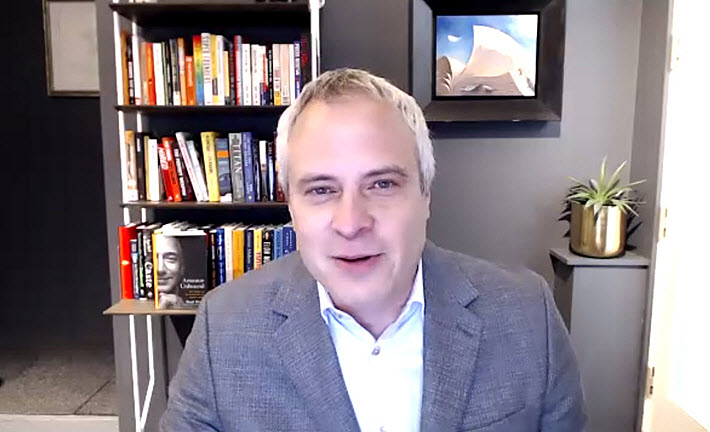 Not surprisingly, journalist and author Brad Stone is talking Amazon again. With his new Amazon Unbound: Jeff Bezos and the Invention of a Global Empire out last month from Simon & Schuster. Stone is also the author of The Everything Store: Jeff Bezos and the Age of Amazon (Hachette/Little, Brown, 2013), and he’s senior executive editor of global technology with Bloomberg News.

He used some visuals to demonstrate a problem many authors have encountered in the “Everything Store”–book knockoffs meant to woo consumers from bestsellers to bogus titles, preying on readers and authors.

Using visuals, he offered several looks at illicit publications cropping up on Amazon.com around his newly relesed title.

One he showed in his presentation includes “not the greatest dialogue,” Stone said: 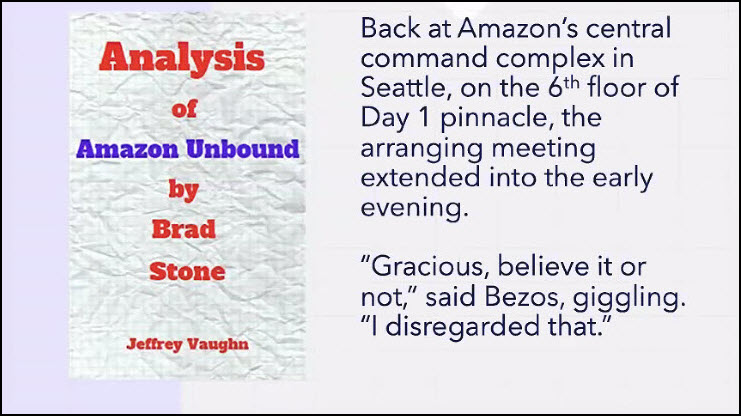 This one has an especially incoherent blurb, which Stone assumes came about through online translation, first from English and then back into it from another language: 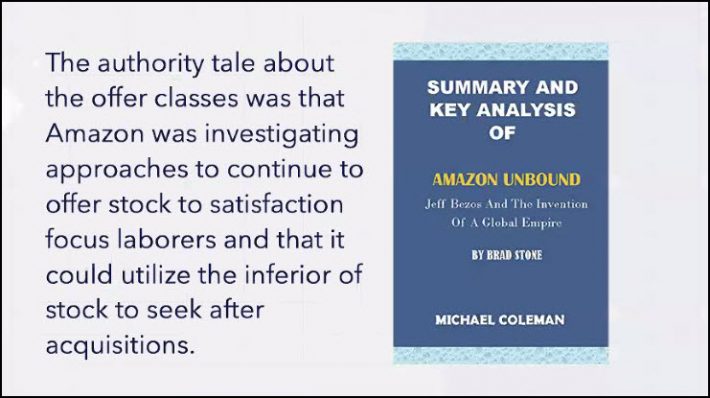 And here’s one with an “author” whose last name is, ostensibly, Review. 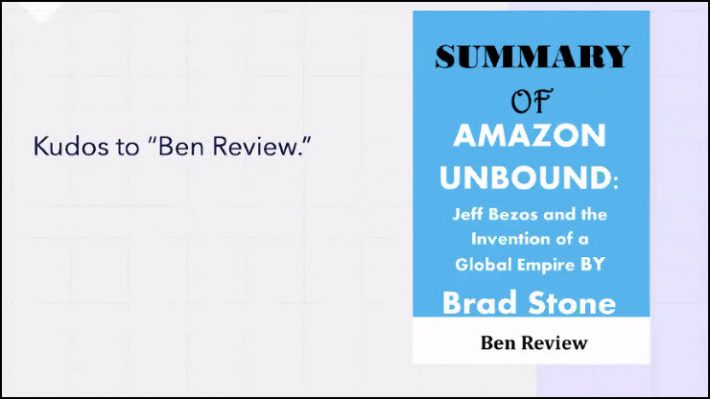 “So obviously you’re all familiar with this,” Stone said. “Amazon has been gamed. A third-party seller has used its distribution system, its ebook publication tools, its fulfillment network, to trick readers into buying books that are algorithmically generated nonsense … computers tricking computers into exploiting customers.” 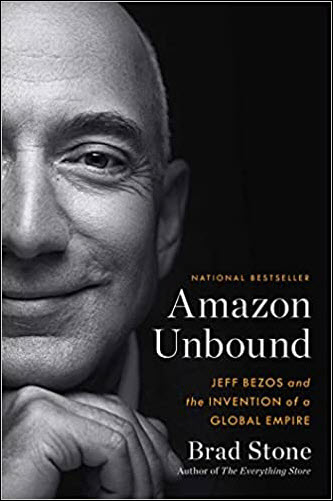 What Stone said he has concluded after writing his two books on Amazon, is that the huge company “builds new businesses with people and carefully personalized attention, often from Jeff Bezos himself. When those businesses get to a normal size, Amazon runs them with algorithms and automation, and often does so carelessly, with negative actions for customers and for society.”

Stone said that in the initial stages, when Bezos and Amazon were focused on books, “Amazon nurtured his book business with people, with careful attention, in part by creating an editorial division, employing people who cared deeply about books, curated Amazon’s selection, and reviewed the best work. But during the dot-com bust, Amazon fired the editorial staff and replaced them with algorithmic recommendations and customer reviews.”

Following Klobuchar in the program, Stone said, “I don’t think antitrust regulators are going to roll back the clock and change the balance of power in book publishing.

“There certainly are examples of potential anti-competitive conduct by Amazon that should be addressed,” he said, such as most-favored-nation clauses. “But here’s the reality that you simply can’t avoid,” Stone told the publishers. “Amazon isn’t going anywhere. The changes that it brought to the book business are real and permanent.

“Amazon doesn’t really make its living in the book industry anymore.” And that broad diversification of the company, ironically, he said, may mean that Amazon isn’t as interested as it once was in “beating publishers down in negotiations … the pricing fight over ebooks 10 years ago now seems really quaint.

“I think that counts as good news,” he said. “Publishers can devote themselves to growing their non-Amazon businesses faster than their Amazon businesses, and retailers can look to strengthen their connections with customers, pry them away from Amazon, with the kind of personalized service and attention that Amazon will never have. For example, the fact that bookstore owners would never, ever stock a flimsy nonsensical book like this one”—he referred to one of the knockoffs of his own book—”should be a profound competitive advantage.

“I do think there’s a lot to learn from Amazon,” Stone said. “It’s the companies that are constantly reinventing themselves–rethinking their relationships with customers and taking nothing for granted and using technology to their advantage—that win in the end. 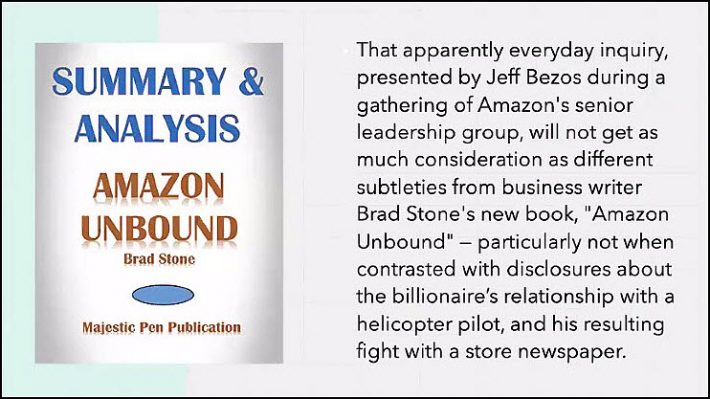