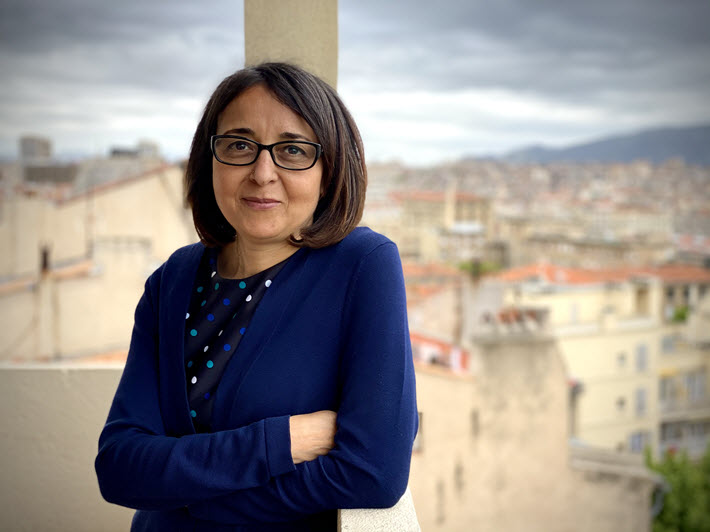 A lost novelist, ‘her whispering voice, fleeing depression,’ led this Egyptian poet to one of the biggest literary prizes in the world.

‘The Search for One’s Individual Voice’

And in that same year, the Egyptian poet Iman Mersal was featured by Words Without Borders in a sequence of eight of her poems. All were translated to English from Arabic by Khaled Mattawa. And in the center of this collection, perhaps the shortest work was “I Look Around Me“:

With the alertness of a creature
expecting its demise
I usually look around me.
Perhaps that is why
my neck has a strength
that does not match my body,
and what is surprising
is that I do not foresee live bullets
from empty side streets
or scissors-
as a silent way of killing-
but flashing glances
from eyes I barely glimpse
but that can do
what must be done.

– Iman Mersal, ‘I Look Around Me,’ translated by Khaled Mattawa, Words Without Borders, January 2006, used here by permission

Today (May 25), Mersal is among the Sheikh Zayed Book Award program’s most adamantly acclaimed laureates, welcomed as the 2021 winner in Literature for her creative nonfiction work Fee Athar Enayat Al-Zayyat (In the Footsteps of Enayat Al-Zayyat), published in 2019 by Al Kotob Khan Library. 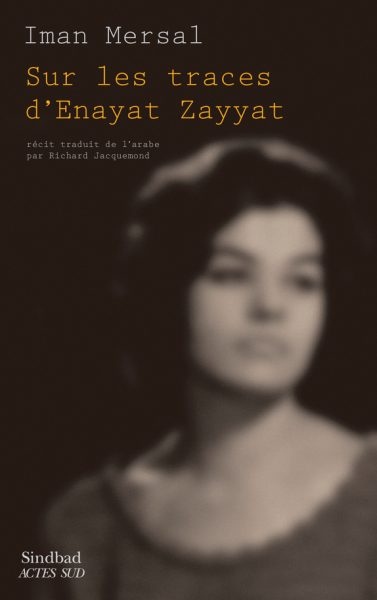 The subject of the book, Enayat al-Zayyat, was a writer who took her own life at age 27 before seeing her own novel published, Love and Silence. Mersal’s new, award-winning book is based on her search for who Cairo’s Al-Zayyat was.

Normally found in Canada working as an associate professor at Edmonton’s University of Alberta, Mersal this year holds the Albert Camus chair at the University of Marseille. So it is that she dials in from France for Abu Dhabi’s presentations this week by one of the world’s wealthiest portfolios of literary prizes. The Zayed Award is handing Mersal 750,000 UAE dirhams (US$204,192) with her medal and certificate.

And because she worked in the 1980s as co-editor of the feminist magazine Bint al-Ard (Daughter of the Earth), we opened our exchange with her by mentioning that when Publishing Perspectives interviewed Arabic-to-English translator Marilyn Booth, she spoke of how many women writers in the Middle East needed more visibility to Western audiences.

‘The Gift of Accent: Quarreling with Words’

“I remember thinking: who is Enayat? Why had I never seen the title of her novel in any accounts of Arab novels or Arab female writing?”Iman Mersal

When I picked up Al-Zayyat’s Love and Silence from a used book stand in 1993, I was a young poet living in Cairo and searching for my own voice. I remember thinking: who is Enayat? Why had I never seen the title of her novel in any accounts of Arab novels or Arab female writing?

I related to the narrator’s internal journey and her whispering voice, fleeing depression. Questions about the absence of Enayat and her novel from the Arab literary canon are what sent me on this journey. But my goal was not just to bring her novel into the canon of Arab literature, or Western knowledge about Arab female writers. Reading the past with its individual and collective wounds is my motive for telling Enayat’s story.

Publishing Perspectives: Is Bint al-Ard, the feminist magazine you co-founded in the 1980s, still in production?

IM: Together with five other young women I co-founded Bint al-Ard, a feminist magazine, in 1986. Its last issue appeared in 1992. This experience taught me a lot about feminism as well as the value of collective work. However, since then I decided to leave collective activism and focus on writing.

PP: And how is your year progressing in the Camus chair in Marseille?

IM: Being the Camus chair at IMéRA-Aix-Marseille is a great honor. It gives me the opportunity to pursue my research on linguistic accent in 19th-century Arabic plays, and the role of Arabic accents in the formation of Arab nationalist discourses from the 1940s to the 1960s.

Furthermore, I want to explore the gift of accent: my own experience quarrelling with words, as I struggled to overcome the inadequacy of my voice, sometimes leading to states of spiritual enlightenment. 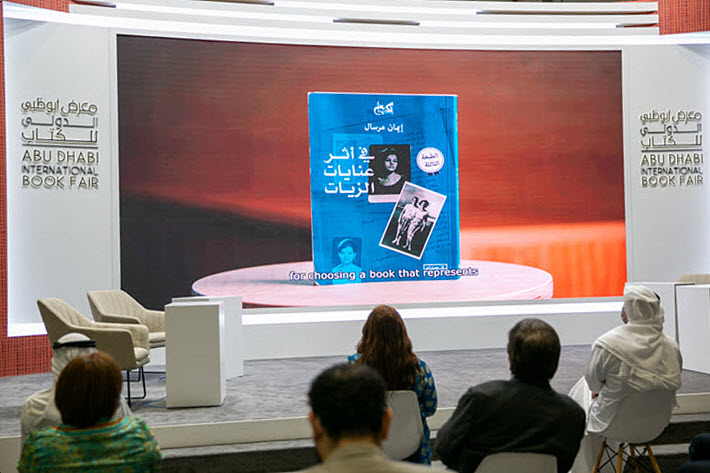 ‘The Prose Poem Was Not Just a Style’

PP: Another element of Arabic work not appreciated as much as it should be is the profound place of poetry for so many literary artists and their readers.

IM: For centuries, poetry occupied the essential position in Arab culture, but I think this has changed. The novel has been dominating the global literary scene for some time. Arab culture is no exception.

“As a writer who does not speak most of the languages into which my work is translated, I have to relinquish guardianship over my poems, allowing them to migrate to new homes.”Iman Mersal

Furthermore, Western readers who are interested in literature from elsewhere tend to read novels as social documents about unknown societies. What fascinates me now is the strong return of creative-nonfiction-writing in Arab culture, seemingly a new phenomenon. But I say “return” because nonfiction writing flourished during the Golden Age of classical Arab culture, from roughly 750 to 1250.

The latter is the author of Maqamat Al-Hariri which has been translated into English by Michael Cooperson, winning the Sheikh Zayed Book Award for translation this year. Some of the best books published in Arabic in the last few years were creative nonfiction, for instance Haytham El Wardany’s The Book of Sleep, published in English by Seagull Books.

PP: With poetry being such a substantial part of your work, how do you see the relationship of prose and poetry in the way you devise your writings?

IM: One purpose of writing is the search for one’s individual voice, through and against one’s own language. Moving between literary genres does not matter. Each writing project determines its genre, mood, and structure. I feel I am a writer even when I am involved in academic research or the art of translation. Perhaps poetry is unique among literary genres, more unpredictable, more full of surprises.

PP: And is prose poetry (qasidat al-nathr) still a key interest for you today? Or is your own vocabulary evolving into something more essentially your own?

IM: Although the prose poem has existed in Arab culture since the 1950s, I was part of the generation that moved it from the margin to the center of the Arab literary scene.

For me the prose poem was not just a style, but reflected a desire to escape the rhetoric and historical ideology of Arab culture in general, and poetry in particular. Prose poems, in that context, were one way to oppose the mainstream grand narratives about everything from Arab nationalism to the concept of political commitment in literature during the colonial and postcolonial eras. I still write prose poems, but I don’t take this for granted.

On Translation: ‘Actively Involved in the Conversation’

PP: It was Carolyn Forche who wrote in an article about the “vibrancy” of the language in your writings. When it comes to translation, how challenging might that vibrancy be to capture? Do you worry that the work may not reach readers in other languages successfully?

“I believe that the language into which foreign work is translated is the one that benefits the most from the art of translation.”Iman Mersal

IM: As a translator, I know the challenges of capturing the vibrancy of whomever I am translating. The translator must be passionate about the text he wants to carry to his own language in order to face these challenges. Sometimes they are cultural, other times linguistic, always stemming from the grain of the particular author or text.

As a writer who does not speak most of the languages into which my work is translated, I have to relinquish guardianship over my poems, allowing them to migrate to new homes. As I told Marcia Lynx Qualey in an interview: You imagine that your voice is carried through the air to ears far away from you; it is impossible to determine how your voice will reach the other side. It may sound more elongated or softer than it really is, or it might sound grandly eloquent, as if you are an elite native speaker. The translator who selects my poem and sits there struggling to put it in his or her own language has the right to rewrite it–as long as my accented voice survives its journey to the destination.

PP:  Relative to your Zayed Award win, how much progress do you feel is being made in getting strong Arabic work out into the world in greater numbers of languages and countries?

IM: First, I believe that the language into which foreign work is translated is the one that benefits the most from the art of translation. Translation broadens its ability to produce knowledge and enrich its own literature, while supporting its speakers’ desire for understanding, tolerance and dialogue.

Having said this, there is also a necessity for Arab literature to contribute to world literature and thought today. To contribute means being actively involved in the  conversation. I appreciate the Sheikh Zayed Book Award for its important role in recognizing and facilitating translations of Arabic books into different languages, and from those languages into Arabic as well. 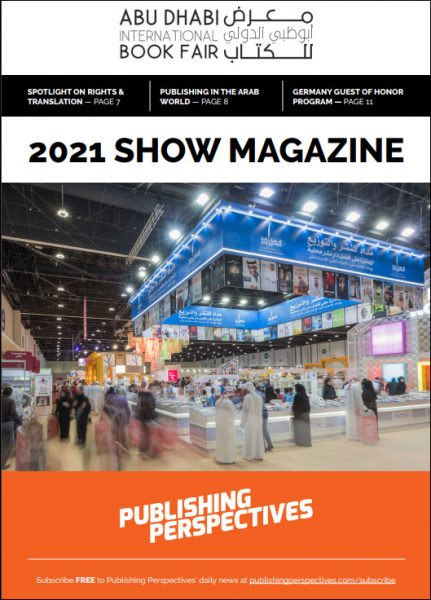 PP: When you work with students in literature today, how readily do you find them catching on to the arts of translation? Are they attuned to the inherent challenges of the work?

IM: Students who are good readers in general tend to bring important questions and notes about a translation. But there are other students who take the translated text for granted; their questions usually seek to explain the ambiguity which usually results from cultural differences, not from defects in translation.

I remember one time I was teaching Naguib Mahfouz’s Midaq Alley (Zuqaq El Midaq). One student was not happy with the word “Alley” as the equivalent of the word “Zuqaq”. She even shared an architectural definition of the alley to prove her opinion. I learn a lot from this kind of classroom discussion.

PP: Clearly, the kind of visibility that this and other awards can provide is much needed and great to see, but we need so many more works of Arabic to move into translation for it to become natural for more international readers to look for work from the Arab world. In your experience over the years, are we at least starting to speed up somewhat in terms of awareness and delivery of translations from Arabic, not only into English but also into as many other languages as possible?

IM: Yes, it’s very important to have institutional support for translation. But we also have to salute individuals who translate the books they love. I’m not a specialist in translation, but postcolonial studies give us the necessary framework to understand the power relation between center and periphery which is so critical when it comes to moving ideas and books across borders.

For me, translation plays a necessary role in understanding the human condition. But shouldn’t the culture of the center, English for example, include Arabic texts in its internal dialogue as well?