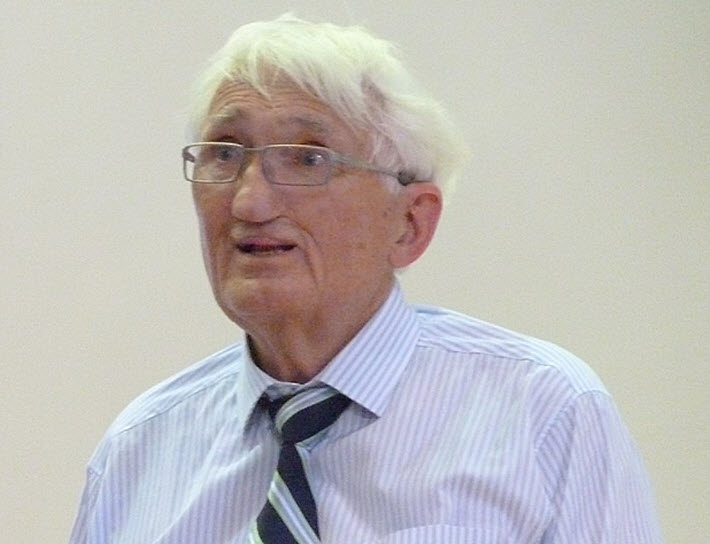 In a reversal, the German sociologist informs the Abu Dhabi-based prize program that he will not accept its career-achievement award.

Jürgen Habermas, in a photo from June 2011 at a lecture engagement in the Audimax of the Humboldt University in Berlin. Image: Nikolas Becker, CC BY SA 3.0

Organizers of the Zayed Prize in Abu Dhabi have issued a short statement today (May 3), expressing “regret for Mr Jürgen Habermas’ decision to retract his acceptance of the award but respects it.

“The award embodies the values of tolerance, knowledge and creativity while building bridges between cultures, and will continue to fulfill this mission.”

As Publishing Perspectives readers know, Habermas, 91, was indeed expected to formally accept the award in the upcoming May presentation of this and the program’s other eight category winners for 2021.

The Associated Press in Berlin, however, reported on Sunday (May 2) that Habermas would instead turn down the award, reneging on his earlier acceptance.

According to comments he made to Der Spiegel‘s online service—and quoted by the Associated Press—his decision has to do with “the political system” in the UAE.

“I have declared myself ready to accept this year’s Sheikh Zayed Literary Prize,” he’s quoted saying. “That decision was wrong and I am hereby correcting it. I did not realize clearly enough the relationship between the institution that awards this award in Abu Dhabi and the political system that prevails there.”

The 15-year-old Sheikh Zayed Book Award is produced by the Abu Dhabi Arabic Language Centre, under the auspices of the emirate’s department of culture and tourism. The award he originally had accepted comes with will a medal, a certificate, and a cash award of 1 million UAE dirhams (US$272,257).

Background on Habermas’ Change of Heart

At this writing, reporting on Habermas’ reversal of his decision is not extensive. Prior to Habermas’ announcement, Dietmar Pieper published an opinion piece at Spiegel Politik on Sunday, strongly criticizing the UAE’s human rights violations record and asserting that Habermas had agreed to accept the award for its cash prize.

Pieper writes in his piece of being in contact by email with Habermas and quotes him, saying, “Of course I was suspicious, and I found out about the institution and the award winners before I accepted the award.” Habermas, Pieper relates, says he was in touch with Juergen Boos, president and CEO of Frankfurter Buchmesse. As Publishing Perspectives readers will recall, Boos is a member of the Zayed Award’s Scientific Committee.

According to Pieper, Habermas says that Boos had “dispelled concerns that are obvious.” Pieper says that Habermas had determined that his work could have a positive  influence in being introduced more widely by the win. “How should I not be pleased that my books, of all things, about the discourse of ethics in the tradition of the Kantian Enlightenment, have been released in the United Arab Emirates?”

Habermas later, however, declined the Cultural Personality of the Year award, which, Pieper highlights, was awarded in 2015 to the Sheikh Mohammed bin Rashid Al Maktoum, ruler of Dubai and prime minister of the United Arab Emirates. A Deutsche Welle report on the Hagbermas withdrawal writes that Al Maktoum ” is suspected of kidnapping and detaining two of his daughters.” And in a follow-up this morning at Germany’s Börsenblatt, Der Spiegel’s Pieper says that Habermas “remains true to his most important values” in having decided to decline the award.

Last year’s Cultural Personality of the Year honor went to the Palestinian poet and translator Salma Khadra Jayyusi. In 2019, the United States-based scholars and professors Jaroslav and Suzanne Stetkevych were the winners of the designation. The Arab World Institute was named in 2018 for “promoting cooperation and cultural exchange between France and the Arab world.” The Moroccan historian Abdellah Laroui was the laureate in 2017. And in 2016, Amin Maalouf, the French novelist born in Lebanon, was named the Zayed Cultural Personality of the Year.