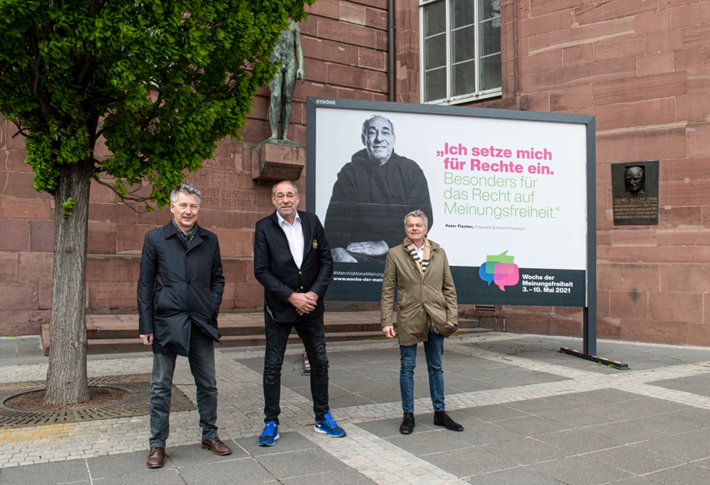 International citizens are signing the new Charter for the Freedom of Expression created by the German publishers’ association. Its hashtag means, ‘My opinion is not the only opinion.’

‘A Visible and Great Social Consensus’

Choosing to kick off on Monday (May 3), which was UNESCO’s World Press Freedom Day, Germany’s Freedom of Expression Week—Woche der Meinungsfreiheit—now is up and running through next Monday (May 10), and includes opportunities for international citizens to sign on to its charter. 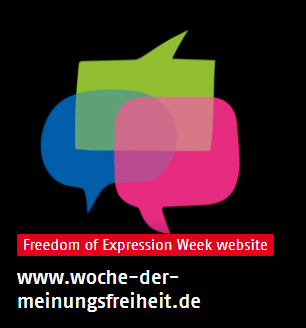 Having grown quickly, the program has been developed by the Börsenverein des Deutschen Buchhandels, Germany’s publishers and booksellers association, and now has been joined by an impressive roster of close to 35 partners including Amnesty International, Reporters Without Borders, Frankfurter Buchmesse, PEN Center Germany, the Eintracht Frankfurt sports club and its influential president Peter Fischer, the Gutenberg Book Guild, the Anne Frank Educational Center, and the Goethe-Institut.

And today’s news (May 5) from the United States about Facebook’s oversight board and Donald Trump’s social-media account may well play into some of the Freedom of Expression Week debates, discussions, presentations, and performances. As Elizabeth Linder, a former Facebook executive, has said today in a CNN interview from London, the extraordinary action the huge platform has taken against Trump has implications for world leaders everywhere.

Having suspended the still-sitting president on January 7 on the day after the domestic-terrorist attack on the US Capitol, Facebook asked its relatively new “oversight board” to generate an opinion on whether Trump should continue to be silenced. As Mike Isaac reports for The New York Times, the board has determined that it supports Trump’s suspension but that within six months, Facebook should review the matter to create a “defined penalty” with respect to how long such a suspension should continue.

Questions abound, then. Where do issues of expression stand in a world in which the biggest public forums may be, as Facebook is, privately owned, not spaces controlled by the state or the people? Is Trump, a former world leader, being denied some form of freedom of expression when such a platform, even privately owned, cuts off his access?

Here’s one of today’s events in Freedom of Expression Week (in German): “Cancel Culture and Trigger Warnings: Do Literary Texts Have To Be Adapted to Today’s Expectations?” You see just how close to publishing and the book business such topics lie.

And in an era in which streets echo with protesters’ chants as political, judicial, law-enforcement, public health, and other institutions are being questioned, the rising intensity of authoritarian, racist, nationalist, and xenophobic dynamics sharpens the key element, the essential issue: how free are you—and the next person—to speak?

The Charter: Eleven Principles, Held Together 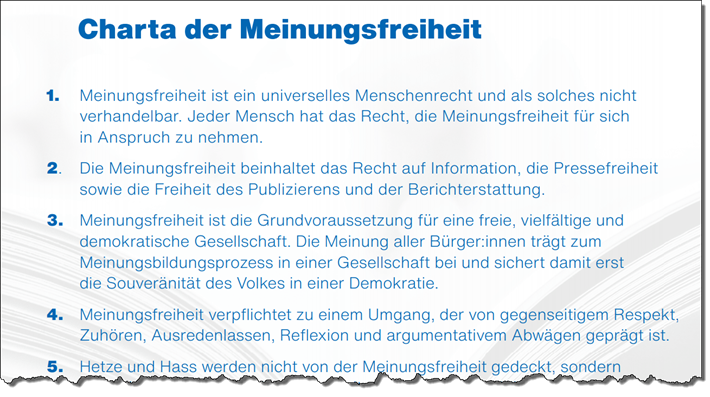 The Charter for the Freedom of Expression has 11 points of responsibility, and can be found—and signed—in English here. Image: Börsenverein

With the kind assistance of the Börsenverein, an English translation has been provided to Publishing Perspectives of the Charter for the Freedom of Expression. The campaign is captured in the hashtag #MehrAlsMeineMeinung.

A literal translation would be #MoreThanMyOpinion, but it helps to understand this as something that might also be said in English as “It’s not just my opinion that counts” or, closer to the original, “My opinion is not the only opinion.” The protection and promotion of freedom of expression, in other words, relies on all of us realizing that others’ opinions have just as much place in the public arena as our own.

And the 11-point charter establishes this concept as a universal human right, nonnegotiable.

The charter also asserts for every person a right to information, freedom of the press as well as the freedom to publish and report.

Perhaps a controversial point is found in the assertion that Harassment and hate speech are not protected by freedom of expression. On the contrary, they violate its core principles. Freedom of expression ends when a person’s dignity is infringed. This, of course, while being something many will agree with, is where contention can arise: who decides whether a comment is the free expression of an opinion or hate speech?

A very mature concept underlies the sixth point on the list: Freedom of expression does not mean freedom from criticism. Criticism signals the beginning of a meaningful debate and thus forms an important part of the opinion-forming process.

And in two instances in particular, there’s an intriguing pressure placed on the citizenry–indeed now being taken up by the people who are debating and discussing these issues in the week’s  activities. Point 7 reads: Freedom of expression requires a culture of debate for which both the state and civil society bear a responsibility. And here’s Point 11: “Civil society has the obligation to stand up for freedom of expression, to expose all restrictions on freedom of expression and to effectively counteract them.”

Those points may seem the most contemporary concerns of the charter, both of them putting the most precious core of a democratic context squarely into the hands of its people, those whose own plights depend on how mindful they are of the sacred grace they hold–and how willingly they share it with each other.

“Your signing is a self-commitment,” the program tells us, “to recognize the established guiding principles, to act according to them, and to carry them into your own environment and network. Sign the charter and contribute to making the right to freedom of expression together with us, a visible and great social consensus. The charter is also intended to help everyone whose freedom of expression is restricted, suppressed and persecuted around the world. You should be able to refer to it.”

Again, the charter is here, and the chance to add your digital signature is at the bottom.

‘We Want To Take Responsibility for Our Society’

Any Publishing Perspectives readers who speak German will be interested in the busy rush of events being produced through Monday for Freedom of Information Week.

You can find them all here, from a reading with author Elif Shafak this evening and a keynote on Thursday from author Nina George to the Sauerland authors Torben Halbe and Hans-Martin Esser on May 7 discussing Can Freedom Still Be Saved in Europe? and a commemorative reading on Monday, observing the anniversary of the May 10, 1933, burning of the books of persecuted authors in many parts of Germany, the National Socialist book burnings, with actors from Freie Bühne Wendland.

There’s no mistaking the fact that the program has been created and produced by the Börsenverein, an event purposely set into motion by the German market’s publishers and booksellers.

“With Freedom of Expression Week,” says the Börsenverein’s Alexander Skipis, “we want to take responsibility for our society. Together with a broad civil society alliance, we want to set a strong example for democracy, diversity and tolerance.

The Rising Breadth of Concern

Again, yes, in other countries, he’s right, these discussions are underway.

Simon & Schuster in New York City, for example, has had widely reported objections (the latest contained here) from many of its own staffers and other publishing professionals who feel that its two-book contract with Trump’s former vice-president Mike Pence is inappropriate, a way of providing a platform to a man whose ethos is part and parcel of what was rejected by the American electorate in 2020.

Simon & Schuster’s executives have maintained that they will honor the Pence contract, pointing out, as CEO Jonathan Karp has said in a message to the staff, “Regardless of where authors sit on the ideological spectrum, or if they hold views that run counter to the belief systems held by some of us, we apply a rigorous standard to assure that in acquiring books, we will be bringing into the world works that provide new information or perspectives on events to which we otherwise might not have access.” Or, as colleagues in Germany are saying this week, #MehrAlsMeineMeinung.

And the Federation of European Publishers has announced that its president, Peter Kraus vom Cleff, will be in conversation on Sunday (May 9) with Reinhard Bütikofer, a member of the European Parliament at 11 a.m. CEST (10 a.m. GMT, 5 a.m. ET), that discussion to be held in German and with English subtitles. Parliament members have been subjected to an entry ban and sanctions by Beijing, Bütikofer being one of them, in reaction to European sanctions reactive to the ongoing human rights violations against China’s Uighur minority.

Bütikofer has also been involved in the case of Swedish publisher Gui Minhai, detained for years in China and awarded the 2018 Prix Voltaire. More details on that event are here.

“Start, tackle, get active–that’s what the Börsenverein des Deutschen Buchhandels can do,” says the publishers’ and booksellers’ association text that opens its programming Web site. “The umbrella association of the book industry is the initiator of the  Charter of Freedom of Expression, and wants to take responsibility for society.”

Freedom of Expression Week is a model for many other nations’ and markets’ publishers associations and book industries to watch carefully.