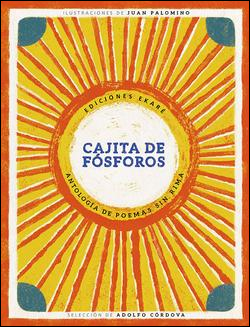 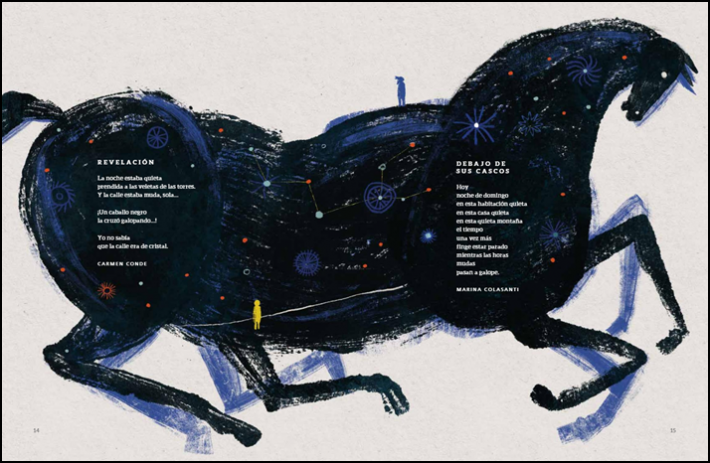 Today (May 27), the program has announced that editor Adolfo Córdova and illustrator Juan Palomino of the Caracas-based Ediciones Ekaré (which has offices in Santiago and Barcelona) are the 2021 winners of the Bologna Ragazzi Award’s special poetry category.

Their Cajita de fósforos: Antología de poemas sin rima (Matchbox: An Anthology of Poems Without Rhyme) is described by the jury as “a valuable anthology of excellent Ibero-American poems composed in free verse.”

In its rationale, the jury writes, “The curator Adolfo Córdova has made an impeccable selection of poetic texts that children can grasp and appreciate despite not all being written specifically for them. A great deal of research and a solid architecture of the volume contribute to this result.

“Juan Palomino’s astonishing plates complete and expand the lines at the same time, while the images, rich in color and dramatic expressiveness, leave ample room for the active imagination of the readers.

“This artfully designed book features some of the greatest Argentine, Mexican, and Chilean writers, such as Borges, Fuentes, and Mistral, along with lesser-known poets, past and present, from many other countries, such as María José Ferrada, Jorge Luján, and María Teresa Andruetto.

“The poetic sensitivity of Córdova, the attitude towards young readers, the refined interpretation of the texts by Palomino,  make Cajita de fósforos a triumphant winner.”

You can see samples of text and deft artwork from the book in an Issuu display provided by the publisher on its site here.

The Bologna Ragazzi Award’s poetry jury this year has comprised:

As ever, a key criterion for the Raggazi Award jurors is how well a book’s text relates to its illustrations. Perhaps less anticipated by some is a criterion that a text must “speak to the emotions, stimulating wider reflections.”

The Ragazzi awards comprise categories including fiction; nonfiction; opera prima for unpublished authors and illustrators; comics; and a “new horizons” award for an especially innovative book. Those are yet to be announced.

This year’s “special category” is poetry, and the jury has provided one winner and four special mentions.

As Publishing Perspectives know, Bologna will stage its all-digital edition this year June 14 to 17, with several additional program elements set for the week of June 7. Registration is open now, free of charge, and details are here.

More awards are included in the annual programming, of course, most notably the Bologna Prize for the Best Children’s Publisher of the Year.  That one is organized in coordination with both the Italian publishers’ association (Associazione Italiana Editori, AIE) led by Ricardo Franco Levi, and the International Publishers Association.

Another one to watch, the Bologna Ragazzi Cross-Media Award, is geared to highlighting “publishing projects that expand their narrative universe towards other media and, vice-versa , the narratives born elsewhere that land on paper.”

This year, for some reason, the Bologna program’s organizers are calling the Ragazzi Award “the BRAW” for “Bologna Ragazzi Award”–just one L short of a brawl. And perhaps when the jury found an impressive 210 submissions waiting for them from 28 countries and territories, the experience of selection did get a bit scrappy.

We’ll stick to the prize’s actual name, not least because we’d like to see the ragazzi of the world–boys and the men they grow into–brawl less and read more. As girls and women do. But what’s more, announcing to friends with rightful joy that you’ve won “the BRAW” easily could be misunderstood as a great victory in the underwear department.

More details of Bologna’s ramp-up is ahead as we have it. 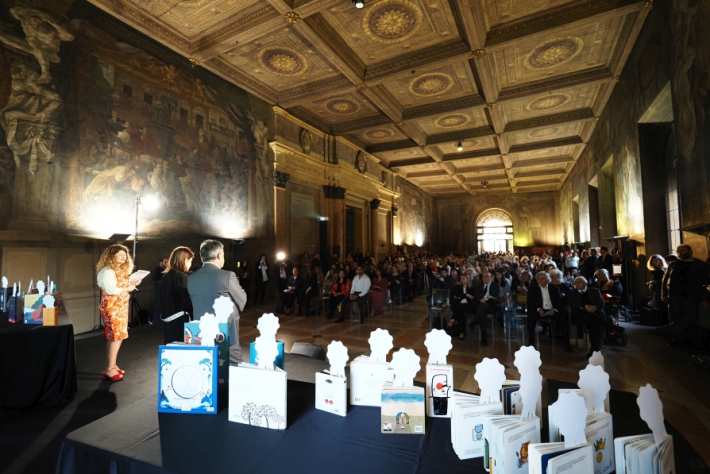