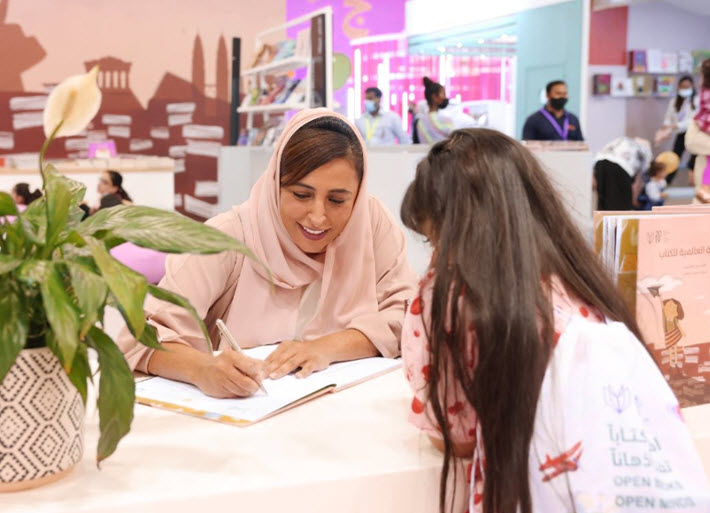 Proceeds from the new children’s book, ‘World Book Capital,’ will go to damaged bookshops and libraries in Gaza.

‘Does Such a Magical Place Exist?’

International Publishers Association president Bodour Al Qasimi has launched her new book for children at the Sharjah Book Authority’s 12th annual Sharjah Children’s Reading Festival, and is donating all proceeds to Palestinian bookshops and libraries damaged in the conflict in Gaza.

As Publishing Perspectives readers know, the Sheikha Bodour Bint Al Qasimi founded her Kalimat Group publishing house 14 years ago in 2007, creating what was then the first house fully dedicated to young readers’ literature in the Gulf. Her associated nonprofit Kalimat Foundation for Children’s Empowerment has become an international leader in the provision of Arabic-language books for children in refugee camps in many parts of the world.

Al Qasimi became president of the International Publishers Association (IPA) in January, a two-year-term. Sharjah’s annual reading festival for kids runs through Saturday (May 29) and by the weekend is expected to have featured authors from 15 nations and the work of at least 395 artists and illustrators.

Proceeds from sales of the new book “will be donated to the Palestinian bookshops and libraries damaged in the conflict in Gaza. I hope we can help rebuild these cultural centers.”Bodour Al Qasimi

And in a world wracked by displacement, it’s interesting to see how many of Bodour’s sentiments and Damanti’s images have to do with kids conjuring up cities in which they’d like to live.  The book imagines cities in which “libraries are everywhere” and “bookstalls are on all streets” … “where stories are told at park benches and playgrounds, on beaches and in shopping centers, in museums and amusement parks.”

The book then introduces its readers to how “the whole world celebrates these cities as the World Book Capital” and say that these cities “have created generations of readers and thinkers who will build their own future.”

Imagine a city whose heartbeat is unlike any other heartbeat. 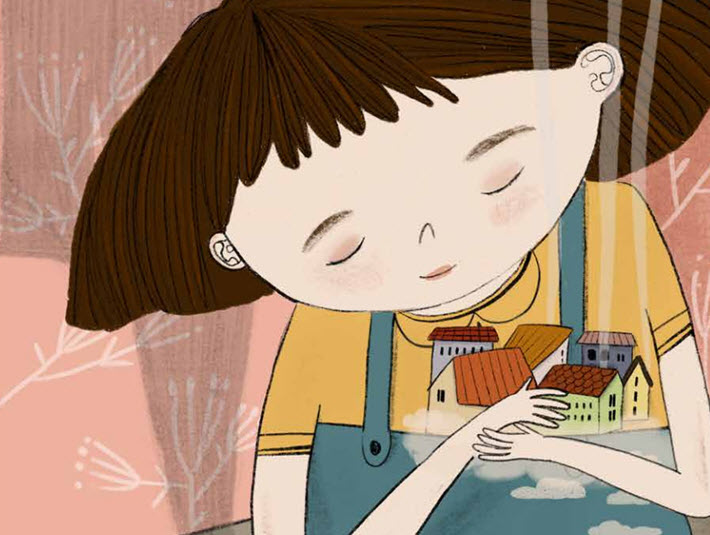 Imagine a city whose streets are decorated with books and knowledge … 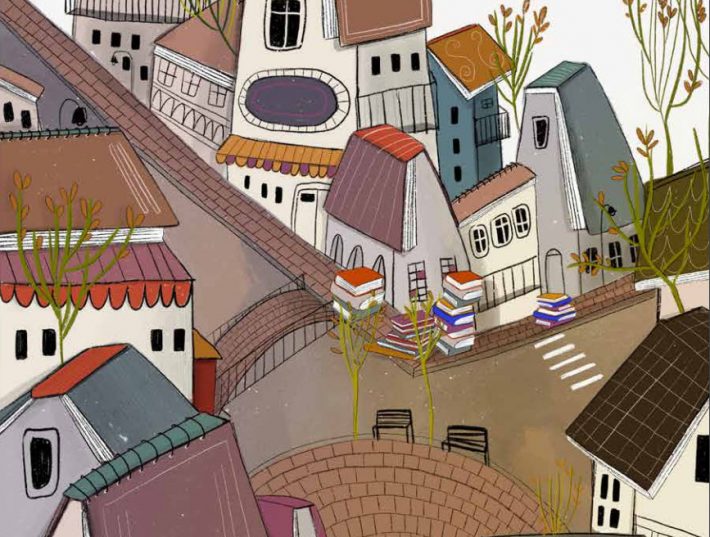 Where people ask, “What are you reading?” instead of, “How are you?” 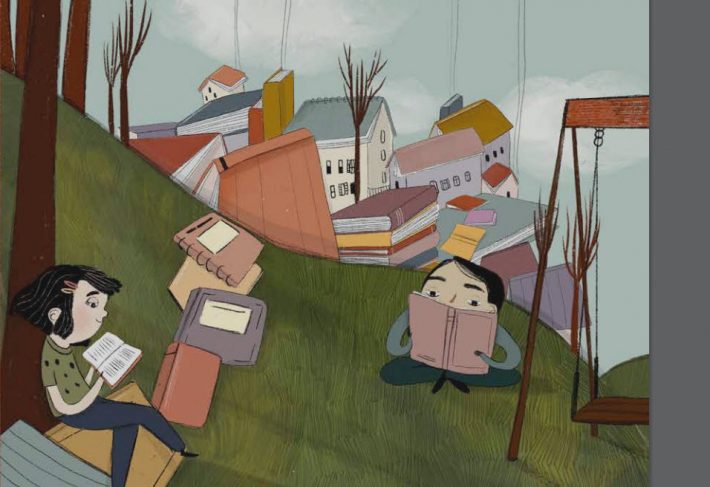 Al Qasimi: ‘I Thought It Was Still Important’

“I was thinking about the idea during the preparation for world book capital,” Al Qasimi tells Publishing Perspectives, “and it was due to be published right before the closing ceremony. But because of the pandemic, we had to postpone it.

Al Qasimi, who has participated this week in programming at the Abu Dhabi International Book Fair, naturally turned to the Sharjah Children’s Reading Festival for the introduction of the book, and was there to meet with the emirate’s children and sign their copies of the book, which is published in both Arabic and English.

UNESCO, Al Qasimi says, “was very happy to include their logo on the publication.” She says in answer to our question that in addition to its original two languages, “I think it would be great to sell rights into different languages, especially to the World Book Capital Cities’ languages.”

As Publishing Perspectives readers will remember, Al Qasimi last month was in Georgia as Tbilisi became the 2021 World Book Capital, and between Sharjah and Tbilisi, there was a turn for Kuala Lumpur. Because of the coronavirus COVID-19 pandemic, of course, the Malaysian year didn’t enjoy the kind of international visits and visibility that normally goes with the honor. Prior to Sharjah, in 2018, Athens was World Book Capital, and in 2022, the designation is to go to Guadalajara.

Al Qasimi is known for seemingly nonstop leadership in the international business. There’s her creation of the PublisHer network that supports and promotes women in the business; her founding of the Emirates Publishers Association; her development of the African Publishing Innovation Fund with Dubai Cares; IPA’s regional outreach and conferences programming as well as its ongoing assessment of the pandemic’s toll on international publishing.

There’s also a family. She’s a wife and a mother, a businesswoman, and the indispensable steward of much of the literature-focused policy of her father,  Sheikh Sultan bin Mohammed Al Qasimi.

And it will surprise no one who knows her to learn that when we asked if this is her first book, Al Qasimi said, no, “I’ve previously authored a set of baby books, so this is my second book to be published by Kalimat.”

She also points to the lyrical illustrations Damanti has provided her new release. And here’s how the artist opens the book’s section in which each World Book Capital is remembered: 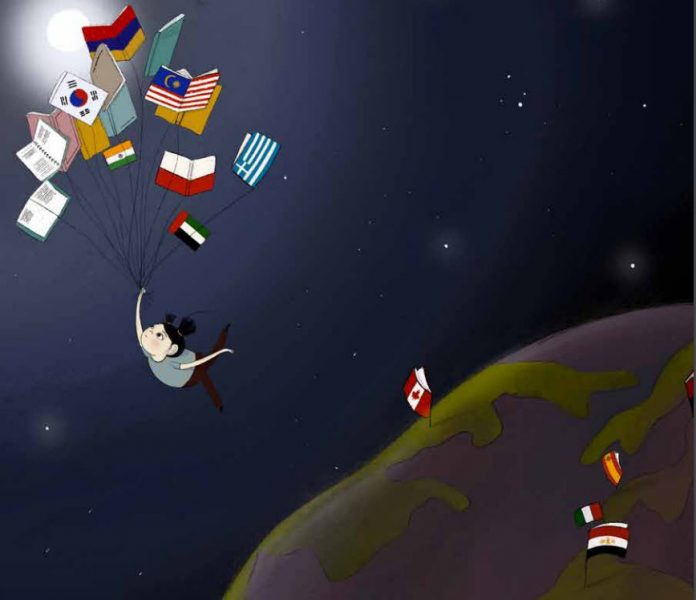 Tuesday (May 25), Al Qasimi announced that proceeds from sales of her new World Book Capital “will be donated to the Palestinian bookshops and libraries damaged in the conflict in Gaza. I hope we can help rebuild these cultural centers.”

Not only does the United Arab Emirates have a tradition of providing aid to the Gaza Strip, but Al Qasimi–after leading the bid for Sharjah to become the first Gulf city named a UNESCO World Book Capital–has maintained the infrastructure created for that program as a center for crisis response.

Since the April 2020 conclusion of Sharjah’s year holding that designation, the emirate’s World Book Capital Office and Ahmed Al Ameri’s Sharjah Book Authority have intervened at several points to support other World Book Capital venues and to provide relief funding when needed. One example of this was in last autumn’s efforts by the program to assist Lebanese publishers and book fairs impacted by the devastating explosion in Port Beirut.

As reported by Mona El-Naggar, Adam Rasgar, and Mona Boshnaq for The New York Times today (May 26), “During 11 days of fighting this month between Israel and Hamas, at least 66 children under age 18 were killed in Gaza and two in Israel, according to initial reports.” 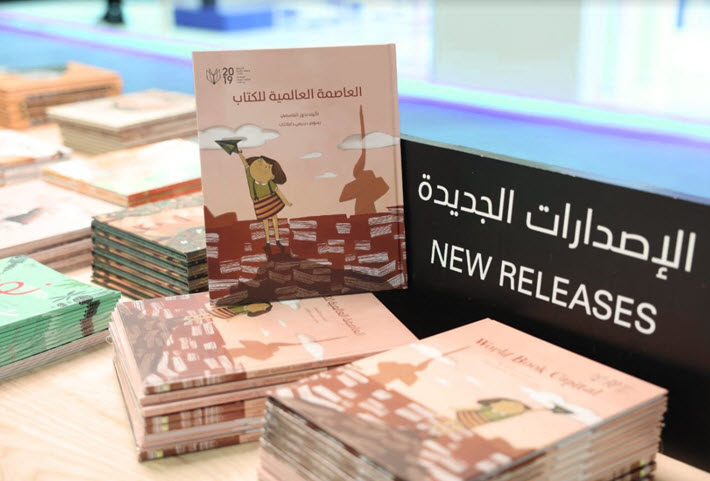