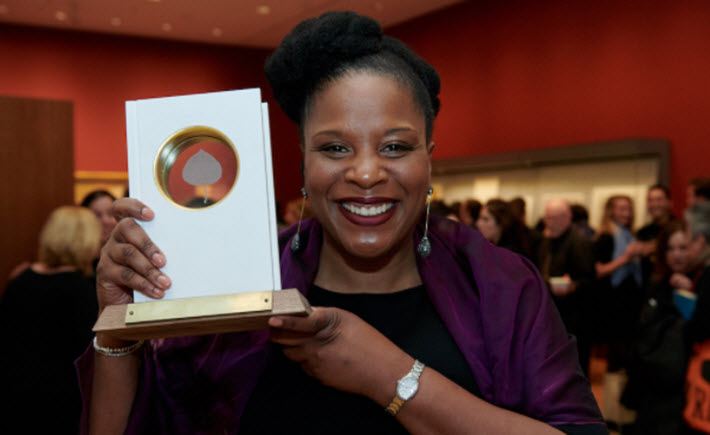 The acclaimed writer speaks with Emirates Airline Festival of Literature director Ahlam Bolooki, asserting ‘You don’t have to write every day.’

Tayari Jones celebrates her win of the 2019 Aspen Words Literary Prize during the program’s reception at the Morgan Library in New York City. Image: The Aspen Institute, Joe Carrotta

Editor’s note: Tayari Jones is the 2019 winner of the US$35,000 Aspen Words Literary Prize for ‘An American Marriage.’ This is significant because the Aspen prize is a committed issue-driven program that honors ‘an influential work of fiction that illuminates a vital contemporary issue.’ The award, now in its fourth year, has named Louise Erdrich its 2021 laureate.–Porter Anderson

‘Start Wherever You Are’

This week at the ongoing Abu Dhabi International Book Fair, bestselling American novelist Tayari Jones has held a virtual conversation with Ahlam Bolooki, director of the Emirates Airline Festival of Literature , to talk about her writing, and the phenomenal success of her 2018 novel, An American Marriage (Workman/Algonquin Books, 2018), an Oprah Book Club pick that spent weeks on bestseller lists.

In speaking with Bolooki, Jones says that the reasons for a given book’s success are “a little bit mysterious,” but she says that when she published her debut novel in 2002, the United States’ publishing situation was “not a very good time for African-American writers.” Jones credits her resilience in her career to her loyal readers, many of whom belong to book clubs. “That sustained me, and I kept writing for them.”

An American Marriage focuses on a newlywed middle-class Black couple, Celestial and Roy, whose lives are overturned when Roy is wrongly convicted of rape.

Their separation during the five years he spends in prison ends up dissolving their marriage. In her work as a law professor at Emory University, Jones had done research at Harvard on mass incarceration in the United States and its disproportionate impact on Black men. She wanted to use it in a novel, “but I didn’t have a story yet,” which meant her early attempts were like “trying to set statistics to music,” she says. 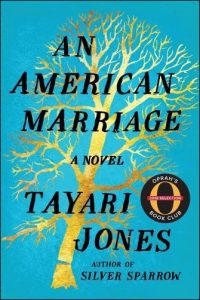 The turning point, she says, was when she happened to overhear a man and woman arguing in a mall about a similar wait after seven years. That, for her, she says, was the key to the story, in which there are “two people who disagree, but they’re both right.”

Ahlam Bolooki notes that both An American Marriage and her previous novel, Silver Sparrow, are written from the perspective of more than one character.

The experience of writing fiction, Jones says, is an exercise in empathy: “You experience people’s lives vicariously when you read, but even more so when you write. If you have a well-rounded character, you have to see their entire perspective,” even if a character is otherwise flawed or unsympathetic. “If I can’t find a character’s point, I just won’t put them in the book.”

Her ability to empathize with her characters is particularly necessary, she says, given the amount of time she has to spend with them.

“It takes two or three years to write a novel,” she says, “and I cannot spend time in a novel with people I don’t like or respect.”

An American Marriage had a particularly long gestation, she says, which ironically contributed to its success. “If it had been published five years earlier—when it was due—during the Obama years, it wouldn’t have been as successful.” At the time, she tells Bolooki, there was less interest in the United States in literature as resistance, and less appetite for hearing from Black writers about systemic racism than there was in 2018.

And it certainly didn’t hurt that Oprah had selected the book for her club in February 2018. As with other Oprah Book Club authors, she had to keep it a secret for five months, which she found “a great blessing.” 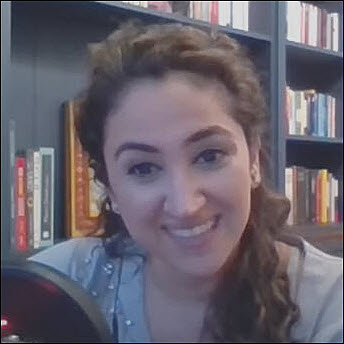 Jones says she’s been pleased to speak at Abu Dhabi International Book Fair, sharing–as many other authors do at this fair each year–pragmatic advice to beginning writers.

She recommends that writers “Start wherever you are. You don’t have to start at the beginning. Write the parts of the story that are interesting to you and fill in the other stuff later.”

She also pointedly rejects a piece of advice that budding writers have been given for decades: “You don’t have to write every day.”

Given the complex lives many people lead—particularly those who don’t have the leisure to set aside time for themselves—a requirement of writing every day can dissuade people. Instead, Jones says, “The things you think of as impediments for your work are actually your superpower.”

Jones and Bolooki concluded their discussion this week talking about orchids, a flower they both grow. “Orchids take a long time to bloom,” Jones noted. “You have to learn patience with orchids.”

More on the Abu Dhabi International Book Fair is here at our special landing page for all our coverage.

For your free copy of our specially produced 2021 Abu Dhabi International Book Fair Show Magazine, click here. There’s a video look at what’s in this 30-page magazine embedded below.