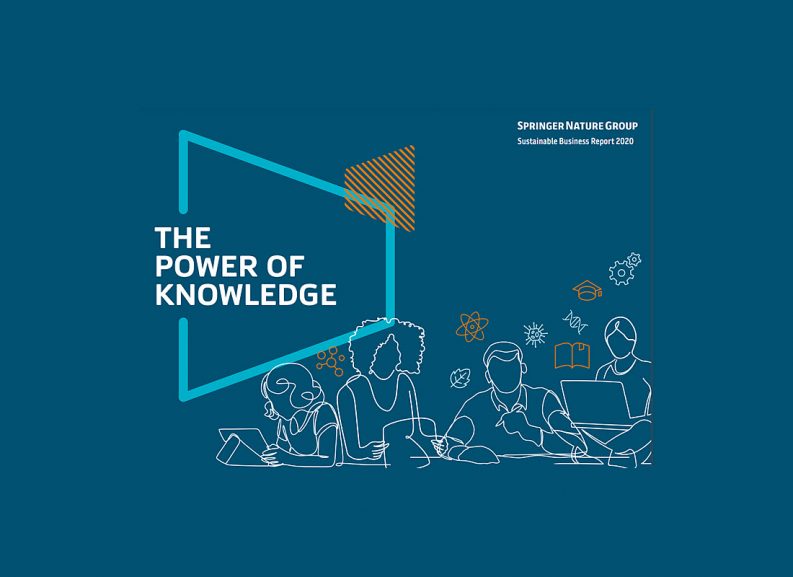 In both corporate social responsibility and in content production as a major academic publisher, Springer Nature had a big 2020. 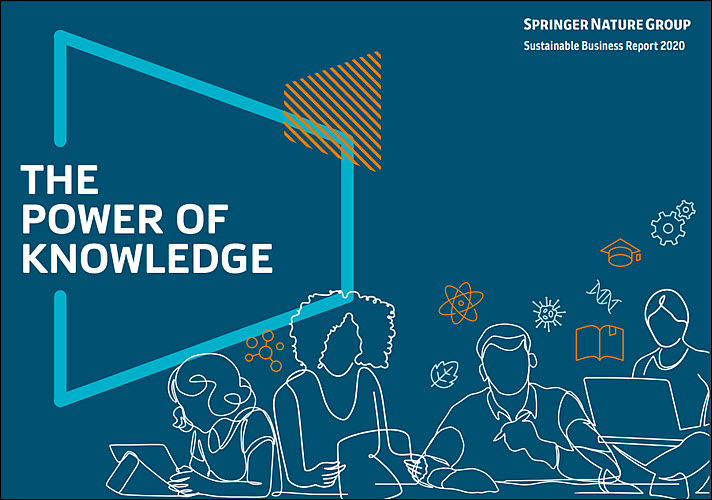 A kind of corporate-responsibility victory lap, Springer Nature’s fourth annually released Sustainable Business Report touts progress at the company in environmental, social, and governance issues and names “steps being taken to champion open science, support delivery of  the United Nations’ Sustainable Development Goals (SDG), and the work it is doing to reduce its own environmental impact.”

Released today (April 8) from the German-British academic publisher’s  Berlin and London offices, the report offers not only a chance for the company to reaffirm its commitment to socially and environmentally progressive concepts but also to list some top-line numbers about its broad international reach and levels of output and activity.

There are more issue-facing numbers in the document having to do with the ongoing coronavirus COVID-19 pandemic. Particularly with parts of Europe struggling at this point with a formidable new wave of infections and faltering vaccination efforts, it’s interesting to read on Pages 7 and 8 that the company has seen:

Peeters: ‘The Need for Collaborations’

In a comment on today’s release of this material, CEO Frank Vrancken Peeters is quoted, saying that the presence of the pathogen offered a good look at “the importance of a research ecosystem that can operate at its most efficient. 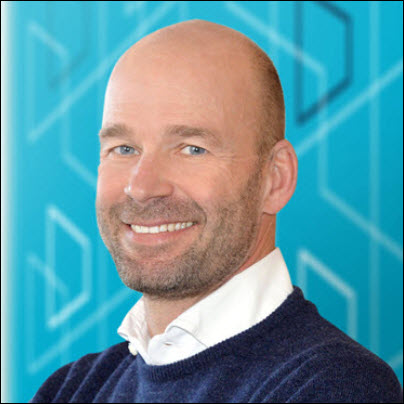 “These events have highlighted the need for collaborations that can accelerate solutions to urgent global challenges including climate change.”

The main thrust of the media messaging today, however, lies in Springer Nature’s avowed interest in being responsive to environmental and social developments in business evolution.

Along the lines of the social , and along those lines, the company is talking about “diversity, equity, and inclusion” with figures including setting a 2023 target for having 45 percent of “the most senior leadership tiers” peopled by women.

The company’s announcements say it reached 43 percent in 2020 and that was a rise from 39 percent in 2018, indicating that steady progress in this area does seem to be underway. 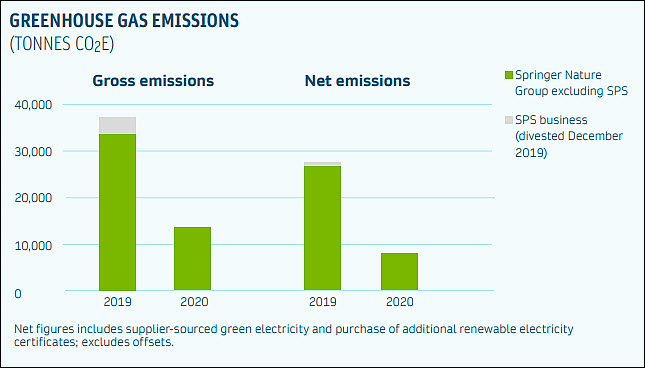 In three areas—”offices, fleet, and flights, (scopes 1, 2, and partial scope 3)”—the company says it is now, indeed, net carbon neutral. “This has been achieved by significantly increasing the use of green electricity, via suppliers or through renewable energy certificates, for more than 150 offices around the world,” the company states, “and the use of high-quality and socially-responsible carbon offsets from CommuniTree, a Plan Vivo-certified reforestation and carbon balancing project in Nicaragua.”

While in the pandemic year, some companies’ flights may have been more limited and thus more easily reconciled for carbon offsets, nevertheless succeeding in this criterion and others in the realm of carbon neutrality is important throughout world publishing, and it’s good to see the book business’ players, both big and small, working in this direction. 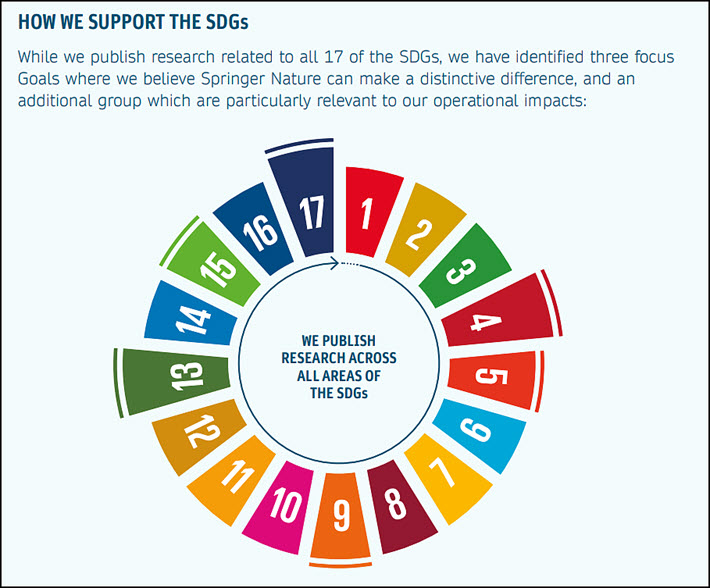 Publishing Perspectives readers will recall that last month the French publishers association endorsed the SDG Publishers Compact that came together last October in a team effort between Frankfurter Buchmesse and the International Publishers Association (IPA). You’ll find on Page 9 of Springer Nature’s report the fact that in 2020, it became a signatory of this effort “to inspire action in the publishing industry,” a salutary move.

In terms of the UN’s Sustainable Development Goals, the company has selected three of the 17 “SDGs,” as they’re called, for special focus, and you can read more extensively about them on Page 12.

There are more SDG-related topics mentioned in the report, as well, including the pan-cancer analysis of whole genomes, efforts to end hunger, and “the ocean in humanity’s future.”

In reading this new report, it’s good to consider its intended audience. The stakeholders to whom this report is directed are listed on Page 4 as “institutions, researchers, and educators we work with, our employees, [and] our shareholders.” Thus the document includes a recounting of both the sheer totals and impressive range of the company’s output and a presentation of its efforts in “corporate social responsibility.”

The concept of a “social contract” between companies and the communities and nations in which they operate gained real traction in the 1970s and has been a prominent fixture in a great deal of major corporate life since. The phrase corporate social responsibility is credited to Howard Bowen in the last century. You can learn more about this in “A Literature Review of the History and Evolution of Corporate Social Responsibility” by Mauricio Andrés Latapí Agudelo, Lára Jóhannsdóttir and Brynhildur Davídsdóttir, in the International Journal of Corporate Social Responsibility, January 22, 2019—published by Springer.

In Springer Nature’s new fourth report released today under the title “The Power of Knowledge,” many admirable gestures of corporate social responsibility are rightly represented. For example, there are those efforts the company has made, itself, to achieve carbon neutrality in its own offices. Another example lies in direct corporate giving, as is found on page 26: “In 2020, we gave approximately €624,000 (US$740,775) in donations and sponsorship to charities and organizations that align with our corporate social responsibility approach.”

And in many other cases, what’s presented in the tone of corporate responsibility can also be understood as the very valuable and normal operations of a leading house of academic publishing in the early years of this decade. An example of this arrives on Page 18 under the heading “Responding to the Black Lives Matter Movement.” In this short passage, the company discusses its “greatest impact” having been “through the content we publish: amplifying underrepresented voices and sharing relevant research.”

Springer Nature, following the May 25, 2020, death of George Floyd in police custody in Minneapolis, created a “Black Lives Matter portal including free-to-access content related to systemic racism, police brutality, and related topics.” Additionally, however, there was a proud gesture in corporate responsibility: the company in June of last year donated US$50,000 to the foundation that supports the network of campuses in the United States called the Historically Black Colleges and Universities.

The overall production numbers for Springer Nature are never small. They can well stand on their own as an enormous body of commercial output:

And even if such statistics in publishing output and corporate citizenship at times seem to lie a bit closely together as presented here, Springer Nature’s new report of almost 40 pages illustrates a robust international market player at work—both in the sheer and critical business of academic publishing and in many fine additional efforts made in corporate social responsibility.

More from Publishing Perspectives on academic and scholarly publishing is here, more from us on open access is here, and more on Springer Nature is here.