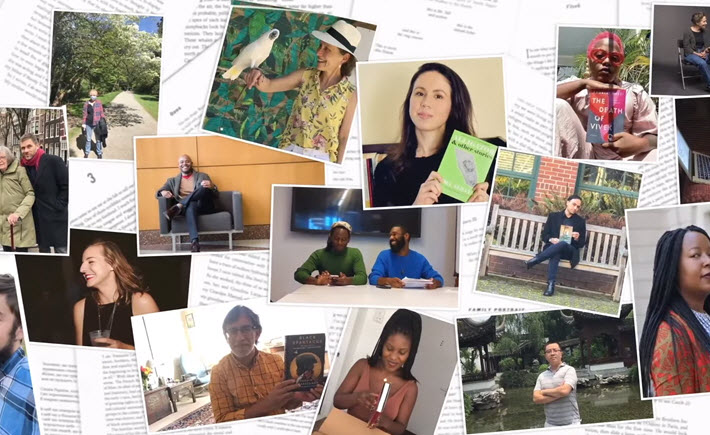 The annual presentation of PEN America’s literary awards and career achievement honors was produced digitally for a second year.

A collage of some 55 finalists in the PEN America 2021 Literary Awards program. Image: PEN America

Nossel: ‘This Year of Tumult and Torment’

In our previews of the PEN America Literary Award finalists and the program’s Career Achievement Prize recipients, Publishing Perspectives readers looked at one of the more complex annual presentations of a broad range of disparate awards.

Funded by many generous  donors and presented on varying schedules, the program carries a combined value of more than US$380,000 in prize money and these awards carry the luster of PEN’s humanitarian stance when conferred on an author’s work.

The 2021 awards program, presented Thursday evening (April 8) in its digital format, ran for a bit over 90 minutes and featured a range of presenters and award winners.

We’ll embed the video of the show at the end of this article for you for your review and offer some of the high points in the program’s wins, beginning with two relevant to our readership’s internationalist stance and interest in translation.

Presenters and special appearances in the digital event included Whoopi Goldberg, Nathan Lane, Audra McDonald, Kara Young, Laurie Anderson, and others, and the program’s online evocation was cleanly edited for smooth running and probably as much coherence as can be gathered in an event that features so many awards, finalists, speakers, and related (or not so related) moments.

Social relevance—for many right reasons—always tends to override the focus on literature at this event, and you can hear that represented, for example, in a comment from PEN America CEO Suzanne Nossel: “Another lesson of this year of tumult and torment lies in the power of those taken away from us to evoke, mobilize, and motivate. We have learned how saying their names can convert their will to live into a fire that burns inside each of us.”

The program can be reviewed below: