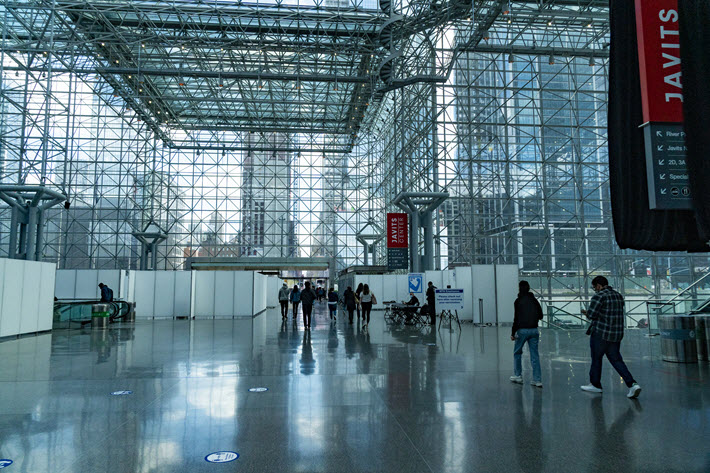 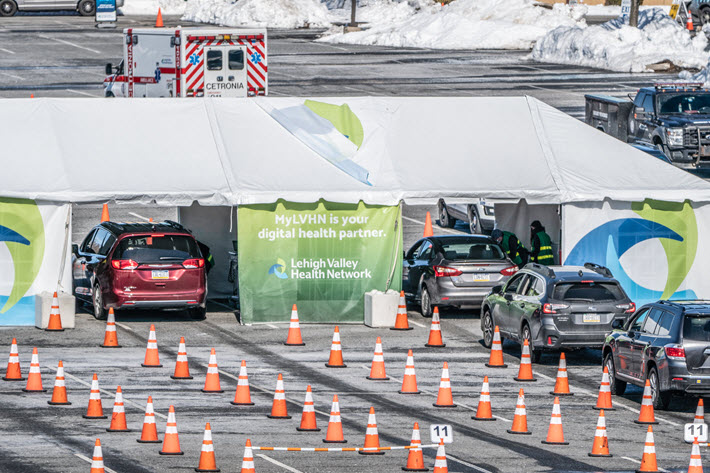 Downloadable Audio Up 27.8 Percent over February 2020

Perhaps the most interesting points in the February edition of StatShot from the Association of American Publishers (AAP) is in that “digital acceleration” space the industry has followed throughout the coronavirus COVID-19 pandemic.

And what’s showing up in the February statistics is staying power, more than some might have expected.

Ebook revenues, the data tells us, were up 19.8 percent in February over the same month in 2020. The total revenue level in that case was US$99.3 million. And downloadable audio was up 27.8 percent in February 2021 over February 2020, at $71.7 million in revenue. Again, the percentages of market for these formats remain smaller than some observers tend to remember (or concede).

In a two-month view, putting January and February together for year-to-date, ebooks were up 20.4 percent over the same period on 2020, at $191 million. 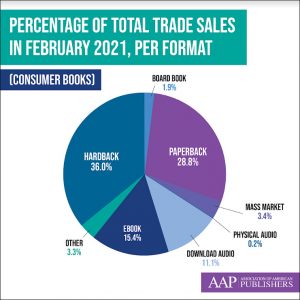 Nevertheless, these ebook and audio numbers may suggest more staying power than some expected to see in the digital formats, which were understandably enriched under last year’s pandemic spread-mitigation measures such as lockdown orders and bookstore closures.

Overall, the new numbers released on Tuesday (April 27) for our report today (April 28) show total revenues across all categories in February of this year up 24.7 percent over February 2020, at $964.5 million. In year-to-date terms—January and February—revenues were up 16.4 percent at $2.2 billion over 2020. 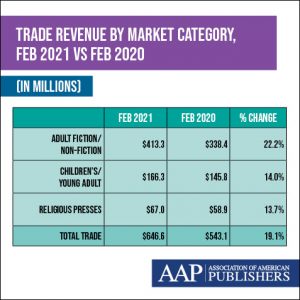 In terms of print format revenues during the month of February, in the trade category:

Revenues from higher education course materials were up 60 percent for the month, as compared to February of 2020, coming in at $239.1 million. Year-to-date higher education was up 13.2 percent, at $668.8 million.

Professional books, including business, medical, law, technical and scientific, were up 7.8 percent during the month of February, at $39.8 million. Year-to-date, professional books were $90.8 million, which is a gain of 7.9 percent as compared to the first two months of 2020.

Quoting from StatShot guidance, “Publisher net revenue, including sales to bookstores, wholesalers, direct to consumer, online retailers, and so on, is tracked monthly by the Association of American Publishers and includes revenue from about 1,360 publishers, with participation subject to change over time.

“It’s not, however, possible to make apples-to-apples comparisons to StatShot reports issued in previous years because (a) the number of StatShot participants fluctuates over time, with the pool of participants growing or shrinking in each report and (b) it’s a common accounting practice for businesses, including publishers, to restate revenue numbers based on updated information. If, for example, a business learns that its revenues were greater in a given year than its reports indicated, it will restate the revenues in subsequent reports, providing information that is more up-to-date and accurate,” and causing changes to earlier StatShot reports.

This maintains the United States as the nation with the highest caseload and death toll, although India—in its desperate struggle with a terrible surge and the variant B.1.617—has moved now to second place in caseloads, at 17,997,113, adding as many as 350,000 new cases daily.

While US vaccination rates are slowing as citizens most eager to be vaccinated are covered, the US market continues to move very fast, now with at least 141.8 million people getting one or both doses and more than 96.7 million fully vaccinated, 29.1 percent of the eligible population. A total 297.5 million doses have been distributed under the Biden administration’s aggressive rollout.

On Tuesday (April 28), the Centers for Disease Control and Prevention positioned new guidance allowing fully vaccinated Americans to be “outside, biking, hiking, running, or in small gatherings” without wearing a mask, as the Associated Press has reported.

More from Publishing Perspectives on industry statistics is here. More on the Association of American Publishers is here and more on the US market is here.