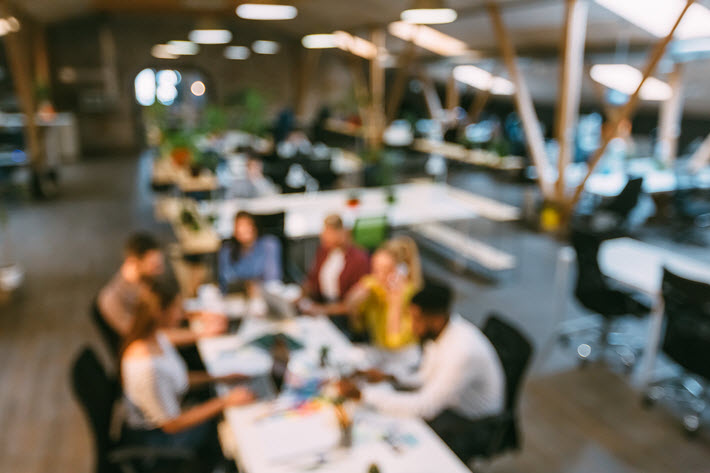 ‘Do we practice what we publish?’ is the key question in the Association of University Presses’ new look at workforce diversity.

‘Even Whiter Than the Full Landscape’

During the unrest in June, when demonstrators in many parts of the United States and the world were in the streets protesting racial injustice and inequality, one of the most remarkable statements that Publishing Perspectives covered came from the Association of University Presses (AUPresses), condemning “the white supremacist structure upon which so many of our presses and parent institutions were built.”

The basis for the self-appraisal referred to then was the association’s Statement on Equity and Anti-Racism, which had been approved a year ago, in March 2020.

Today (March 18), the 84-year-old AUPresses organization—which has more than 150 international nonprofit scholarly publishers in its membership—has issued an even more pointed, more detailed, and more determined statement on diversity, and one that could be a bellwether for the wider business including trade publishing.

“The association must acknowledge and address our own lack of progress,” writes AUPresses’ research and communications director Brenna McLaughlin, “despite decades of diversity work, in building a publishing workforce that directly supports equitable knowledge production.

“The actions our community takes now must be with the understanding of past failure and the intention to effect long-term change in our environment,” McLaughlin writes. “Anti-racism must become part of the groundwater.”

And as attacks in the United States on people of color at the moment include those of Asian heritage amid the pandemic, this new appraisal seems more timely than ever.

Context: The Bid for Workforce Diversity and Inclusivity

We’ll turn shortly to the basis for what has prompted this statement today from McLaughlin and the university presses. For context, however, it’s important to review the state of play in which this new commitment to action is appearing.

Many parts of the American and international trade and scholarly publishing communities have in recent seasons made real efforts to grapple with complex issues of self-assessment, frequently making good-faith efforts to move forward on workforce diversity and inclusivity. As we’ve written, the world leader is the United Kingdom’s market, in which the Publishers Association has shown a level of leadership seen in no other major international markets with its and its member-publishers’ commitment to a 10-point “Inclusivity Action Plan” to address and actualize publishers’ concern about these issues.

In many other markets, we’ve seen less coherent efforts, usually lacking a framework of evaluation, decision, and approach. This is one reason, of course, that the PublisHer organization stepped forward earlier this month, on International Women’s Day, with its new and extensively prepared Diversity and Inclusion Diagnostic Toolkit (PDF). 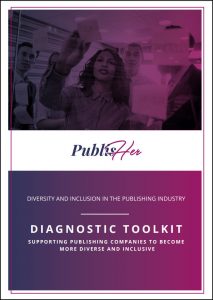 Not unlike the problem in many countries today of local administrations tasked with sophisticated challenges of coronavirus COVID-19 inoculation, most responses to the book business’ struggle with diversification have been left to individual publishing houses. This frequently results in such fine but limited efforts as scholarship programs for potential future publishing professionals from a broader demographic landscape than can be found on a current staff roster. But it does little to forcefully assess and address the here and now, the current conditions of the workforce.

In a world constantly finding itself on the crumbling brink of unexpected challenges without genuine leadership in place, publishers frequently find themselves expected to strike out on their own, their corporate independence well respected but with dubious prospects for reshaping the overall workforce through such a patchwork strategy.

The AUPresses approach today might hold new keys to a way of working that’s more cohesive, more studied, and more forthright. Granted, the trade and scholarly publishing are far apart in many aspects of content focus, commercial procedures, and consumer base. But both sectors share a formidable task, finding their workforces far from reflective of the multicultural reality in which they do business.

‘Reckoning With Whiteness in Scholarly Publishing’

The AUPresses’ Brenna McLaughlin has published her new revelatory commentary today at The Scholarly Kitchen, the well-known and highly respected blog site from the Society of Scholarly Publishing.

In ‘Reckoning With Whiteness in Scholarly Publishing,’ McLaughlin writes that as part of its self-assessment, AUPresses turned to the multicultural children’s publisher Lee & Low Books, well known to Publishing Perspectives readers for its effort to create a surveyed picture of the demographics of American publishing. AUPresses assisted Lee & Low in its first survey effort in 2015 and that study was updated in 2019—with AUPresses assisting to widen university presses’ participation. 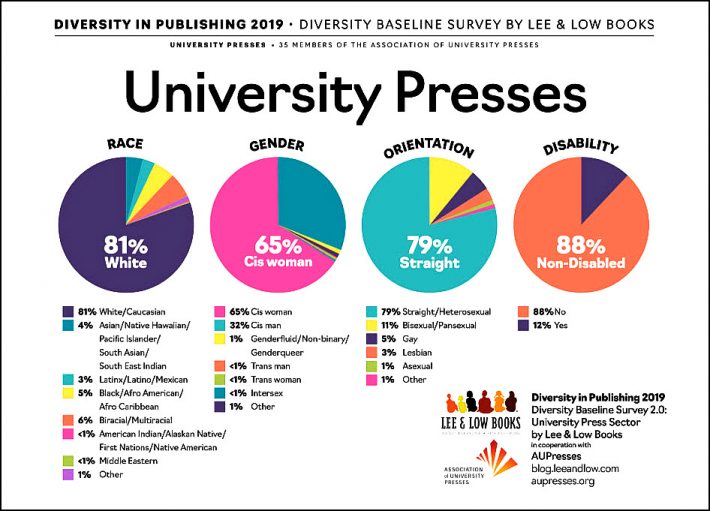 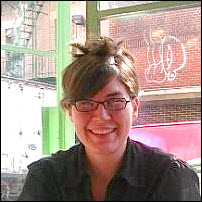 We’ll bullet out for you McLaughlin’s description of what is surfaced in this analysis. It’s McLaughlin, then, we’re quoting:

As you can see from the graphic above, compared to that 81 percent of the workforce identifying as white, just 4 percent identifies as Asian/Native Hawaiian/Pacific Islander/South Asian/Southeast Indian. An even smaller response, 3 percent, identifies as Latina/Latino/Mexican. Those identifying as Black/Afro-American/Afro-Caribbean make up 5 percent. Less than 1 percent identify as Indigenous American (American Indian/Alskan Native/First Nations/NativeAmerican). Six percent identify as biracial/multiracial, and less than 1 percent as Middle Eastern.

Do these statistics constitute a “bombshell”? Maybe something more like the proverbial time bomb everyone knows has been ticking. In the scholarly publishing field, McLaughlin writes, no one should be surprised, and she includes several points of reference for the current understanding of the sector’s makeup. 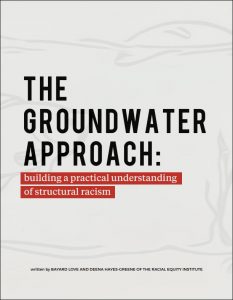 Where McLaughlin may pull you up short is in a comment immensely applicable to the entire book publishing industry right across all sectors. she draws it from the Racial Equity Institute’s (REI) Groundwater Assessment (PDF).

“The question that we need to face right now is not ‘how many dead fish?’ but rather ‘why is the water we swim in so toxic to so many of us, and how do we fix it?'”

McLaughlin goes on to detail some of the efforts AUPresses has been making to do more than count the fish, including digital Racial Equity Institute training sessions, for example, and a new AUPresses Equity, Justice, and Inclusion Committee which has begun work.

In closing her essay today, McLaughlin writes, “The university press community’s deep commitment to scholarship that shines a critical light on racist systems and histories, and to scholarly projects that seek to decolonize and make more equitable our human stores of knowledge, is one of our most significant contributions to the world.”

And yet, McLaughlin asks, “Do we practice what we publish? Getting, at long last, to the point where we can honestly answer ‘yes’ may be what makes the next benchmark survey an observation of healthier water.”

And while many in the trade side of world publishing may usually find it hard to break out the time to drop in at the Scholarly Kitchen—can you stand the heat?—today would be a good day to do just that. We’ll make it easy for you. Here’s that link again.