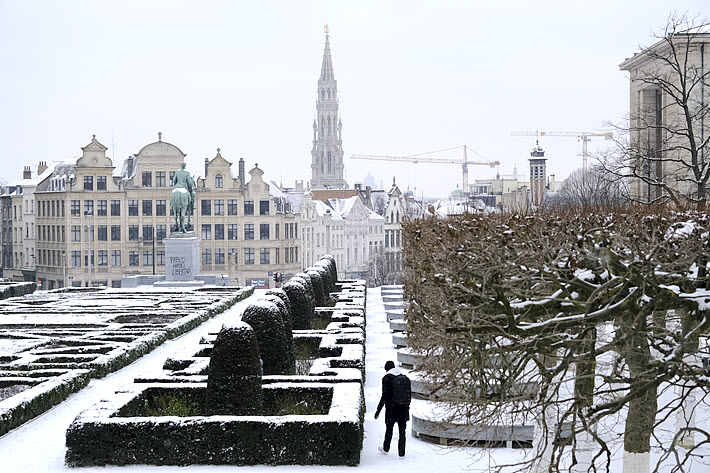 Snow on February 8 in the Mont des Arts area of Brussels where the Federation of European Publishers is based. Image – iStockphoto: Alexandros Michailidis

‘A Much Higher Degree of Resilience Than Many Predicted’

The new appraisal the Federation of European Publishers (FEP) issues today (March 26) is that “the actual result” of the pandemic year’s 2020 impact “has been much better in most countries” than was anticipated by the organization and its member-associations in July.

The overall loss across book publishing in Europe, the federation’s staff now reports, “appears to be closer to something between 2 and 5 percent”—as opposed to the 15 to 20 percent hit expected during the summer.

“Not a good year, by any standards,” the report’s authors write, “but far from the disaster that a crisis such as COVID-19 could have provoked. It seems that the book sector managed to express a much higher degree of resilience than many predicted, or even hoped. This result has in fact come to a certain extent even as a surprise.

“Nonetheless, as we will see, this single figure—as is often the case—hides a much more diverse underlying scenario.”

Publishing Perspectives has been given an exclusive advance look at the report, which coins an interesting phrase: “difficult and divergent.” 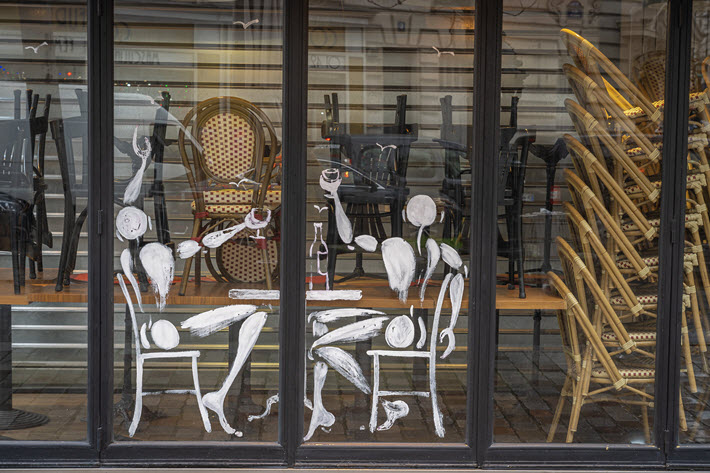 Phantom customers toast each other on the windows of a locked down bar in Paris. By the end of August, France had seen a cumulative loss of some 9 percent, the new report says. Image – iStockphoto: Franck Legros

The real problem, as the federation’s team sees it, is “the vast differences between the players of the fragile book ecosystem” as well as what could be “longer-term consequences for cultural diversity.”

And while most professionals in the world publishing industry understand this, it’s worth stating again that the coronavirus COVID-19 pandemic is not over. The federation certainly doesn’t say that it is, but it’s easy in assessments of this kind for any of us to get a sense that we’re looking back at the crisis, not at a year in that crisis.

Europe at this point is actually being swept by a third wave of infection, writes Jon Henley, The Guardian’s Europe correspondent.

The BBC has just reported as this article is prepared that the European Union has stopped short of banning exports of vaccines from the bloc, with European Commission president Ursula von der Leyen saying that vaccine maker AstraZeneca “must ‘catch up’ on deliveries to the EU before exporting doses elsewhere.

The French president Emmanuel Macron has said to reporters, per the BBC, that the latest struggle over vaccination delivery and distribution has marked “the end of naïvete” from the EU. Gaëlle Fournier in Paris reports for The New York Times, in fact, that France is adding three regions to its lockdown measures because, as the health minister Olivier Véran has put it, “The epidemic situation  is not good.” 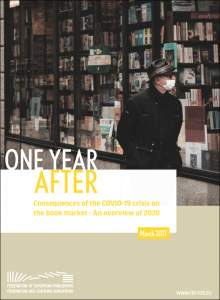 And in the new report, the FEP’s team takes care to point out that there was a fine balloon of consumer support last summer, one that by autumn appeared to be bringing the European books market to a close of the year “at a level very close to that of 2019, with great expectations for the Christmas season, which represents a very large share of annual book sales in every country.”

What would happen, of course, is that new restrictions aimed at mitigating the spread of the contagion in its second, powerful wave in Europe, would forestall those autumn hopes. You may recall that Germany’s was one of the most woefully timed experiences, with tough lockdowns arriving right in the middle of December. As we wrote in our report on the information from the Börsenverein des Deutschen Buchhandels then, “On December 14, by comparison to 2019 figures, all channels (including online sales) performed at an increase in turnover of almost 60 percent, with physical stores at 70 percent. But on December 16, the new restrictions shuttered those stores.”

Nevertheless, today’s report also points to spots of positivity even in that period of the 2020.

“In France,” the federation writes, “bookshops would only be declared essential in February 2021, but benefited from the reopening of all shops at the end of November, which led to an impressive 25 percent increase in sales for December. In Greece too, with bookstores open, December was a very good month for book sales.”

Still, “The new wave of safety measures, in any case, in many instances slowed the recovery of the sector—especially in markets like France and Germany, which could have ended the year at a level closer to that of 2019 otherwise—so that finally 2020 saw a contraction in the European market of around 2 to 5 percent. 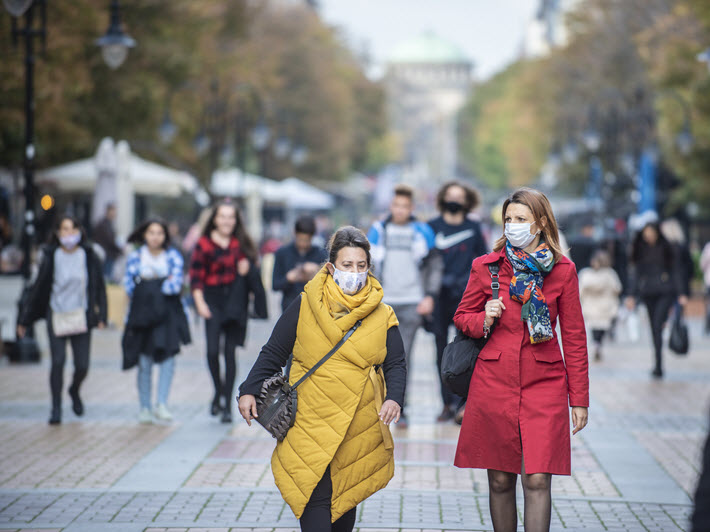 Publishing Perspectives readers will remember that the federation’s “interim stocktaking exercise” was something akin to “snapshots of a crisis-in-progress” rather than a comprehensive overview. At that point, anecdote was a key element of the overview, by necessity. The initial spring lockdowns were lifting, and much remained to be sorted as to what the European book publishing industry was facing.

Today’s report is, in fact, an update to that effort, which was valuable even as an assessment made as the industry’s comprehension of the effects was still in its early stages of development.

Where the new assessment of the situation in Europe comes down today is on that interesting phrase “difficult and divergent.” There are challenges and they are not monolithic. There are different types of hurdles in place or ahead, with varying levels and forms of impact.

Several points from the 13-page report can be singled out.

The federation’s report identifies several markets that fared quite well in 2020, particularly among the Nordics. Norway’s educational and trade figure combined was up 10 percent; Swedish sales grew a reported 8.7 percent in value and 21.5 percent in volume in the trade; Finland’s trade books market was up 12 percent; and Iceland move up by 4 percent.

As for audiobooks and ebooks in the digital acceleration of the pandemic’s effects:

Some countries, “while not displaying such exceptional results, performed quite well given the circumstances,” the report points out. These include the largest continental markets

“In these cases,” the report explains, “the recovery and resilience depended on the reopening—and remaining open, where possible—of the bookstores and on the retailers’ capacity to keep serving their customers through full lockdowns and restrictions, for example via click-and-collect. French booksellers, while affected, were able to maintain on average 60 to 65 percent of their business volume thanks to this system.”

Discounts seem to have been in play in some of the less felicitous outcomes in the bloc, as in East European countries without fixed book pricing. 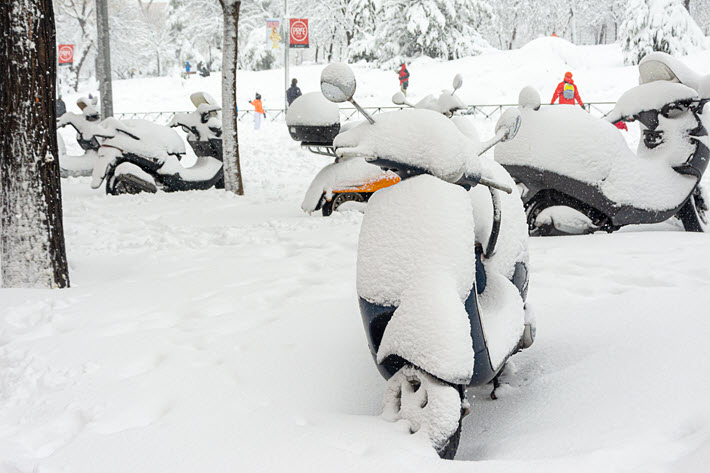 In an opening comment in the report, the federation president Peter Kraus vom Cleff points out that “A key lesson we can draw from our study is that political support for our uniquely diverse and varied cultural sector is crucial.” This is something borne out, for example, in the performance seen in Italy, as mentioned.

“The evidence shows that countries which classified books and bookshops as essential and specifically promoted and supported the cultural sector suffered significantly fewer losses in this core sector, which is so important for Europe culturally and economically, than those in which there was a complete shutdown of the brick-and-mortar bookshops and a lack of state support.”

In perusing the report—which could benefit from some graphics to express comparative numbers in charts or graphs—you’ll find discussions of several key and by now familiar points about the books business’ ability in many markets to weather the peculiar storm of the pandemic’s first year.

For example, here are notes on the “digital acceleration,” as we call it, in a section called “Online Takes It All?” An important point to look for here is the fact that the digital acceleration was kind not just to formats (audiobooks, ebooks) but also to those markets most advanced—or able to ramp up quickly—in online commerce.

“Countries with a weaker online sales infrastructure,” the report nails it, “were likely to suffer more.”

And the cultural diversity concern here has to do with how many cancellations and postponements of releases were made as publishers scrambled to avoid releasing valued content into closed markets. Ireland saw a 20-percent reduction in new titles, France nearly 10 percent, Latvia more than 16 percent and a print run of fewer than 2 million copies for the first time since that nation’s independence.

Much energy needs to continue going into positioning literature and other parts of the cultural industry array as central to economic recovery. 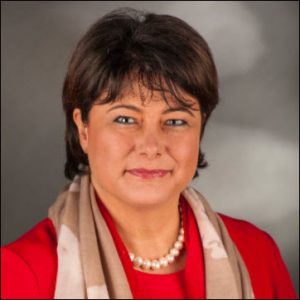 Sabine Verheyen, chair of the European Parliament’s culture and education committee, has a foreword in the report in which she writes, “Here in Brussels, we will certainly continue to work on Europe’s cultural and creative recovery. But we need to join forces.

“With the help of the sector, we must continue to advocate for the importance of culture to our society, not only at the European level, but also at the national
and regional levels.”

And as the report comes to a conclusion, some of the most important comments are about attitude and outlook:

“Prolonged uncertainty is taking its toll,” the federation team writes.

“Lockdowns loom, in some cases bookstores open and close every few weeks, support measures are at times missing or hard to obtain, liquidity problems abound and the possibility to organize events seems still remote—several book fairs have already been postponed or cancelled in 2021.

“A certain pessimism is creeping in on players in some countries as some fear the worst is yet to come. Attitudes, like everything else, vary. Certainly, the sector could use all the support that public authorities will be able to give to it; this support should apply to the whole value chain, from the creators to the readers (with measures supporting demand in addition to those on the supply side), in the name of safeguarding the diversity of the sector and cultural diversity in general.”

More from Publishing Perspectives on the Federation of European Publishers is here, and more from us on Europe is here.