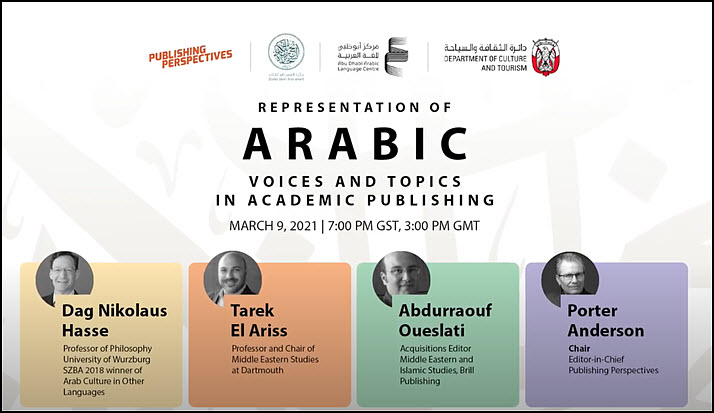 The importance of Arabic in the scholarly world, our experts agreed, needs to be recognized by bringing more of it to the wider conversation. 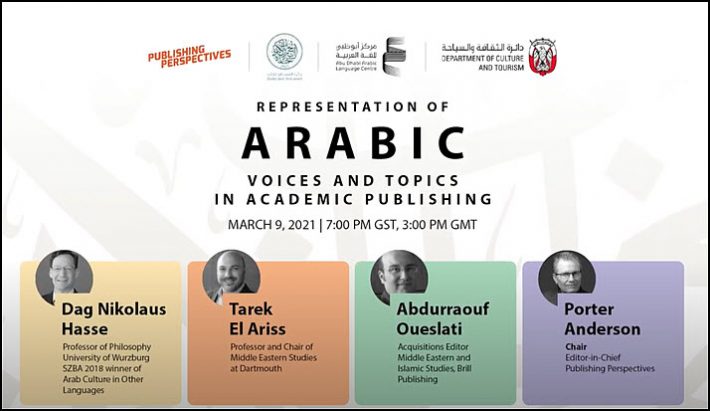 ‘So Many Discussions Going On’

In a program presented Tuesday (March 9) by the Sheikh Zayed Book Award and Publishing Perspectives, there was agreement among our expert panelists that the perception of there being too little representation of Arabic topics and Arabic writers’ work and research in world scholarship is accurate.

The factors that frame the situation, however, are complex. Certainly, there was agreement all around that the kind of value the Zayed Book Award and other such programs create—particularly with translation of the highest quality work—is essential. And what came out of the exchange was a clearer understanding of the need for earnest analysis and sustained effort to widen the presence and impact of Arabic on the international stage.

Speaking from Germany, the Netherlands, and the United States, three key figures in the field joined us.

And, in brief, their viewpoints were complementary and practical.

“We need these viewpoints,” he said, “as part of Western academia.”

And, of course, there have been times when Arabic was prominent among world intelligentsia, as during the Middle Ages when the language was prominent in philosophy, science, and math.

El-Ariss pointed to the need for responsibility in publishing in a reflection of the global-local balance we talk about in many parts of communications and social action theory today.

“You’re not just thinking of promotion and reaching a wider audience,” he said, “but also you want something to be relevant to the communities that are directly affected by the knowledge you’re producing. So there’s a balancing that also needs to be emphasized and sustained, while the whole infrastructure is properly subsidized and supported.”

And Oueslati, the editor, put forward a very concise understanding of the imperative as he sees it: “I think we should offer everyone who has something relevant to say a platform,” he said. “All the different voices in different languages from different traditions, in order to get a more profound discussion and exchange of ideas.

“And that will eventually benefit scholarship on all sides.”

In working our way to these high-view takeaways, we’d started the session with four key questions for our panelists:

Along the way, several insights were surfaced both in terms of challenges and of hopeful signs of advancement in terms of Arabic scholarship on the world stage.

The Question of English 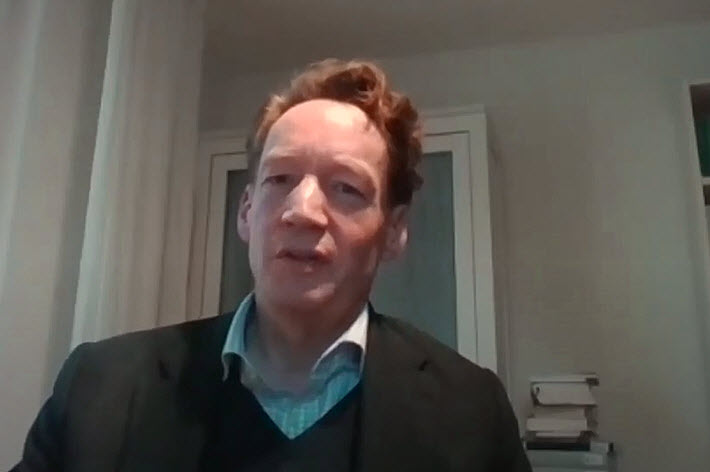 Functioning as the proverbial elephant in the room, of course, is the current hegemony of English as the lingua franca of the moment. Over time, of course, various languages rise and fall in influence, but for the moment the main linguistic channels at the international level are vested in English.

Hasse’s viewpoint is “I think you’re very, very right in saying that Arabic voices are underrepresented in publishing,” Hasse said, “in general, in the humanities, and in science. And yeah, the question is how to, to change this?

“I’m pragmatic about the language question, I have to say. I’m German-speaking originally. And if I were Russian, it would be the same, or Dutch, or Swedish. If you want to reach a bigger audience, it doesn’t make much sense to publish in Swedish or Russian or Arabic or German for that matter. So I think we need to be pragmatic here and work on our English as young scholars especially, and improve our English as a language for scholarship, and try to get these things translated.”

In teaching, Hasse pointed out, he looks for bilingual editions of works, in English and Arabic. “Because if I use them, I encourage my pupils who don’t know Arabic to learn it.

And he called for a consideration in translation of classics from the 20th century, “classics read in the Arab or Islamic world, but not really known in Western languages.” His point was that while having some of the most recent publications translated—certainly a good feature of many awards programs—is undeniably positive, there’s a danger of leaving recent generations’ leading works behind if the time and resources aren’t devoted to getting translations made of outstanding work from recent decades.

The Importance of a Comparative Approach 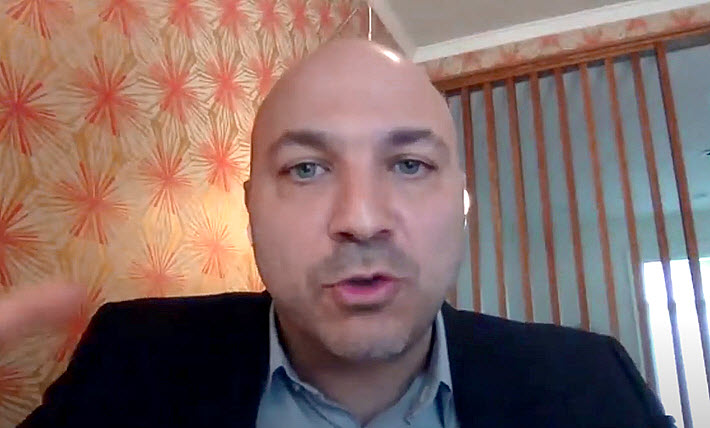 “You know, I’m trained in comparative literature,” El-Ariss said,” so my training leads me to always see interdisciplinary connections and how to frame book proposals, how to present books, how to market books—not only as claiming their authors’ expertise in one field but also how to make them relevant as part of a larger conversation about religion, literature, anthropology, philosophy.

“And this is very important. There needs to be a balance between the zoom-in and zoom-out, between the kind of very specific expertise that scholars have and develop, and also kind of wider conversations that they may not always be aware of.  It has to do with the nature of disciplinary formations,”  he said. “Sometimes people are in a ‘Middle Eastern studies’ department and doing the same work in the language department, and so on.”

El-Ariss’ point is that it’s important to have people in place who can make the connections others might miss in order to bring out the kind of pertinence of good work that may be missed otherwise.

“There needs to be both, I think,” he said, “editors and also professors—and other people in the field—need to recognize these connections so that books aren’t seen as only dealing with niche subjects.” When we allow a book to seem so tightly niched, he said, it can make it hard for buyers to justify the kind of pricing that may be charged in academic publication.

“What I’m saying,” he said, “is that there needs to be a collaboration between authors and editors—and among editors themselves—to see how to take a project and also try to connect it to larger conversations in the fields that aren’t simply ‘Arabic history’ or ‘modern Arabic literature. How do we create these cross-disciplinary and interdisciplinary links for books at the intersection of different fields? The question here is about how the books aren’t simply within area studies, or Arabic studies in a very strict sense. They could also have relevance to debates that are happening and in philosophy, literature, and in other languages and culture.”

El-Ariss also touched on marketing for books from Arabic and other studies that may not “be a lot of bestsellers,” as he put it, but that deserve to find their audiences and need the kind of marketing push that commercial publishing knows better sometimes than the scholarly world does.

“How do we creatively find ways to subsidize publications and also subsidize communications departments that deal with marketing these book, taking out ads in major publications or using social media or contacting certain reviewers?” 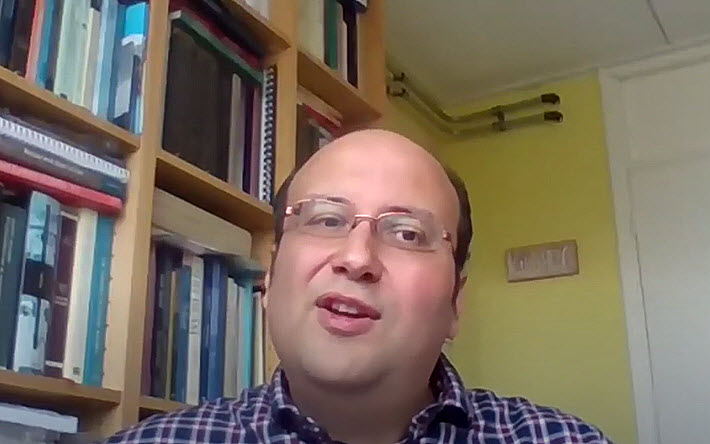 At Brill, acquisitions editor Abdurraouf Oueslati pointed out while working in a niche field and at a time when “English is very dominant still,” he is encouraged to see that in a globalized, changing world, “we think we want to present a platform for publications in other languages. So we made the strategic decision,” he said, “to start publishing works fully in Arabic studies, not only editions.

“This is a decision that was made very deliberately,” he said, “because this way, you can really give people native speakers of the Arabic language, a bigger voice—they always can express themselves better in their mother tongue than in any other language, even if they spend a lot of years learning it. Most people would prefer to publish in their own language. They simply can better express themselves.

“And that being said, and especially also for this field, it’s also important to hear the voices from the people who are living in that region. They can bring in new perspectives, they may have access to different sources. So you will get voices that would otherwise be unheard.”

Oueslati said he’s encouraged by the progress of open access for this reason, and he offered a friendly disagreement with Hasse’s suggestion that working on producing better English is always the way to go. “To an extent,” he said, “our publications might be interesting for an audience that may not read English well.” Making a bid for the nuance and subtleties of the writer in her or his original language, he mentioned that an encyclopedia of Islam—published in Arabic—is coming from Brill next month.

“Hopefully, it will reach a lot of people in the Arab world, who wouldn’t be able to read these kinds of articles if they were in a European language, and this could be great teaching material for Arabic institutions.”

There’s much more of our hour-long conversation in the full recording of the session. You’ll find it in Arabic here, and in English here, and we’ll embed both editions below for you, as well.

We’ll leave you with a passage that El-Ariss brought to the conversation, from Khalil Gibran’s 1920 “The Future of the Arabic Language.” As El-Ariss  translates it, it reads:

“In the past, Westerners ate what we cooked from for them, chewing and swallowing it, transforming and absorbing the good in it into the Western being. As for present day, Easterners eat what Westerners cook for them and swallow it, but it is not transformed and absorbed into their own being. Rather it transforms them into quasi-Westerners. This condition frightens and grieves me because it shows me that the east is at times like an old man who has lost his molars and at other times like a child who has not yet grown any at all.”

And clearly, world scholarship needs to nourish all comers without prejudice as to language or other factors, but in a broad embrace that understands the contributions of the widest field.