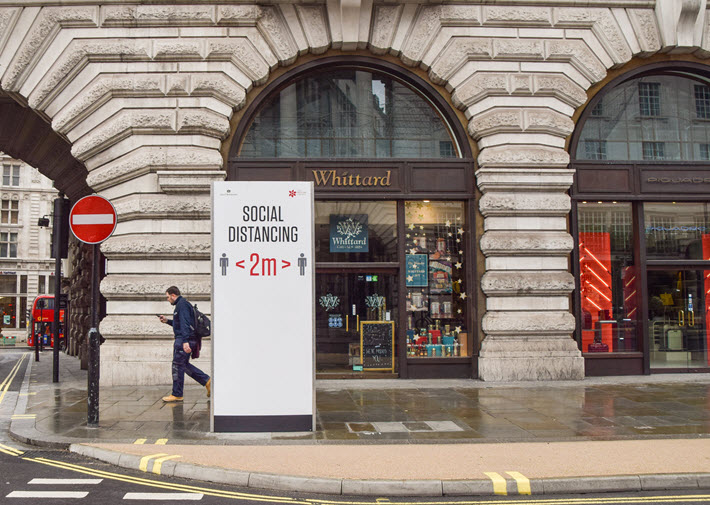 Coming: A Relaunch of the ‘Inclusivity Action Plan’

With an admirable absence of spin, the United Kingdom’s Publishers’ Association this morning (February 12) has released its most comprehensive study yet of the UK’s publishing industry’s bid for greater diversity, saying that “While publishing continues to meet its target to employ at least 50 percent women in senior roles within five years, there has been little progress in its other target of increasing the ethnic diversity of employees.”

Calling it “socially and morally the right thing to do,” the Publishers Association in September 2017 implemented a 10-point “Inclusivity Action Plan,” and at that point took the world lead in the publishing industry in forcefully evaluating the composition—and, frankly, the character—of its business.  Indeed, even its use of the term inclusivity predated the term’s widespread use in many other markets. In association with London Book Fair, the publishers produced several “Building Inclusivity” conferences while publishers tested their own progress against the tenets of the action plan.

All-industry goals were developed in 2017 as five-year targets  intended to see UK publishing employ at least 50 percent women in both senior leadership positions and executive-level roles, and to ensure that 15 percent of employees are Black, Asian, and from other ethnic minorities.

As Publishing Perspectives readers will remember, the best evidence of progress showed up last year, as the association announced in January 2020 that its 2019 study had demonstrated in responses from a total 12,702 employees that women held 53 percent of the executive roles and 55 percent of senior leadership roles.

In the release today of the fourth annual study the Publishers Association has produced, the news in the area of gender and publishing’s leadership is good once more, as it is in some other categories.

Points of Progress, and More 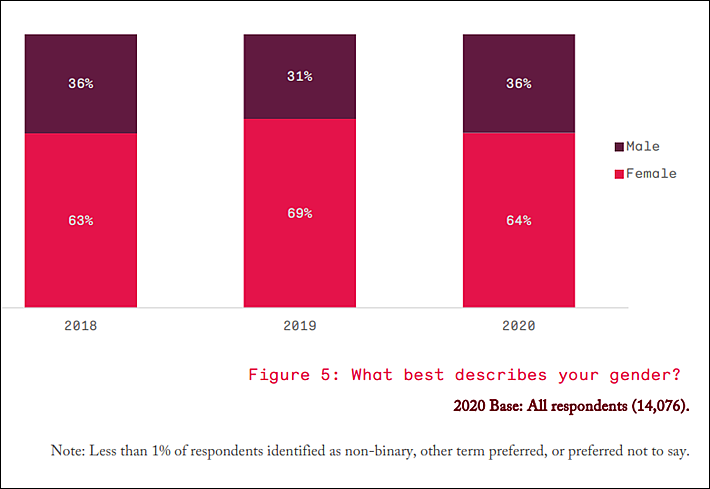 With the overall UK workforce at 47-percent female (according to the World Bank), the new survey shows the UK’s publishing industry workforce ‘relatively consistent’ at 64-percent female. The most heavily female-staffed departmental area is in publicity, where the survey sees a 92-percent female workforce. Rights is next, at 88-percent female. Image: Publishers Association

Among strong points being distilled today from the survey:

But if this year’s report lands as previous years’ surveys have, experience indicates that such welcome trend lines may get less attention than they deserve. The UK market’s perseverance and intensity in its self-examination has drawn a curiously cool international response. Is it possible to have “survey envy?” This is a program to watch, a sustained and determined initiative to evaluate and perhaps adopt as a model.

Ask yourself—from whatever world market you’re reading us today—can you honestly say that your country’s publishing industry is making as concerted and transparent an effort  in diversity and inclusivity as the UK’s people of publishing are doing?

By comparison, the other leading English-language market, the United States, has not mounted so comprehensive and organized industry-wide an embrace of the diversity imperative, although there are many genuinely well-intentioned programs and initiatives underway at various publishing houses in the States. We have new reports on some of those for you ahead in the coming days here at Publishing Perspectives.

These yearly survey reports from London are impressive, not because the news is always upbeat in all categories of diversity as the Publishers Association and its members would like, but because the publishers (a) have repeatedly surveyed themselves and taken the results seriously, (b) are forthrightly reporting where progress is lagging, and (c) continue to have the will to try to improve the situation.

And it’s worth remembering that doing this is no walk through the park. The British market is rich with loud and unstinting voices demanding more–as well those voices should. It takes guts and right-headed honesty to do what the Publishers Association and its member-companies are doing, and that deserves more recognition than it gets. 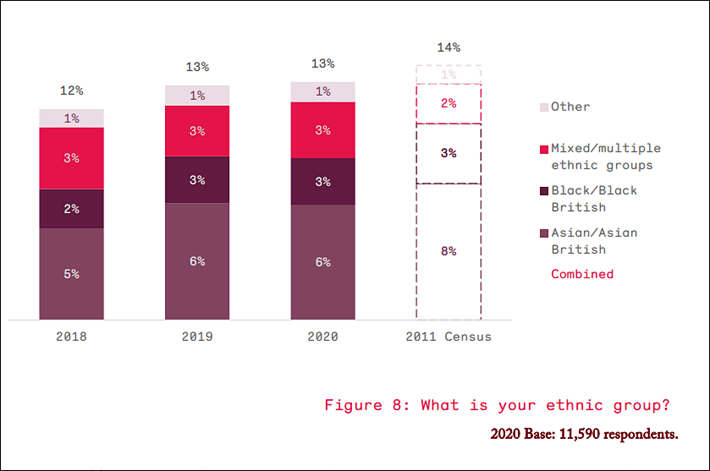 Keeping in mind that the UK publishing industry’s target representation for BAME employees is 15 percent, a point being made today is that the fourth annual survey shows progress weaker than hoped for in this regard. Image: Publishers Association

Today’s UK Publishinig Workforce 2020 data is most concerning in the range of a “BAME” presence in the industry, the term used more in Britain than elsewhere for Black, Asian and other ethnic-minority citizens.

From the association’s summary: “Representation of people from Black, Asian, and minority ethnic groups has remained around 13 percent since 2017. Three percent of respondents identified as Black or Black British, 6 percent as Asian or Asian British, 3 percent as having mixed or multiple ethnicities, and 1 percent of respondents identified as belonging to another minority ethnic group.”

Mental health may have been impacted in this 2020 study by the coronavirus COVID-19 pandemic and changes in work formats around it, of course. We note that data collection for the study was made between last July and October, and the UK has had one of the world’s most fearsome struggles with the virus. The Johns Hopkins Coronavirus Resource Center sees the United Kingdom today having just crossed the 4-million mark in caseload, and its death toll, at 115,447, is the fifth highest internationally, in a population of 67 million.

‘We Are Committed to Increasing Our Efforts’

In his statement today, issued with the news of the 2020 study, the association’s CEO Stephen Lotinga writes:

“There are encouraging findings in this report, particularly in terms of the progress on leadership roles occupied by women and increasing representation of the LGBT+ community.

“However, this year’s survey shows us there is much more to do–and that we are not seeing the desired progress in recruiting and retaining an ethnically diverse workforce.

“While there are many excellent initiatives, we must accelerate change and as an industry we are committed to increasing our efforts. The Publishers Association will work with publishers and partners this year to review and relaunch our Inclusivity Action Plan in pursuit of this goal.”

“On the positive side, the latest survey shows sustained gender equality at the top, and ever-higher LGBT+ representation.

“On the other hand, ethnicity figures were low and remain low, and of the LGBT+ staff, only a third is completely out [of the closet] at work. Mental health is also a significant problem with almost half the respondents reporting mental health issues in their publishing careers.

“Clearly there’s much more work to do to create an inclusive working climate where everyone has a sense of belonging.”

What resonates in Kolman’s characteristically humanistic way of discussing the results released today is his reference to “a sense of belonging.” That, in the end, is the goal of any effort to bring more diversity and inclusivity into a publishing workforce that reflects its market’s population.

“While there are many excellent initiatives, we must accelerate change and as an industry we are committed to increasing our efforts.”Stephen Lotinga, Publishers Association

But it’s also germane to marketing and sales: Book publishing everywhere needs not only employees but also consumers who feel that they belong in the world of books and literature. And that’s an essential goal of the business’ bid for a more equitable, inclusive, fair, and diverse labor pool.

Any effort that enhances the workforce’s sense of belonging will do so for its customer base as well. A healthy reflection of the world at a publishing house means a readership can see itself “on the inside,” recognize itself in the content published, find itself on that imprint’s pages, engage with what it reads there.

The most valuable reader today understands her- or himself to be in the right place with a book in hand, engaged in the pursuit of reading and growing at a time when many other flashier media are competing for his or her attention.

This is why the new survey’s insights into concerns around class background are important. They arrive late in the survey rerport, under the heading “Class and Education.” Some of us have difficulty talking about class and education. It can be uncomfortable. And it’s important.

Using a social-grade classification system called PAMco, based on the occupation of the primary household-earner during a respondent’s childhood, the UK population overall is seen to have some 55 percent of its population based in a “middle-class” designation and 45 percent in a “working class” category.

In publishing, as we might expect, the disparities are greater.

And this, too–issues of class and education–is something the entire publishing world has the opportunity and the responsibility to take onboard as the UK’s industry is doing. 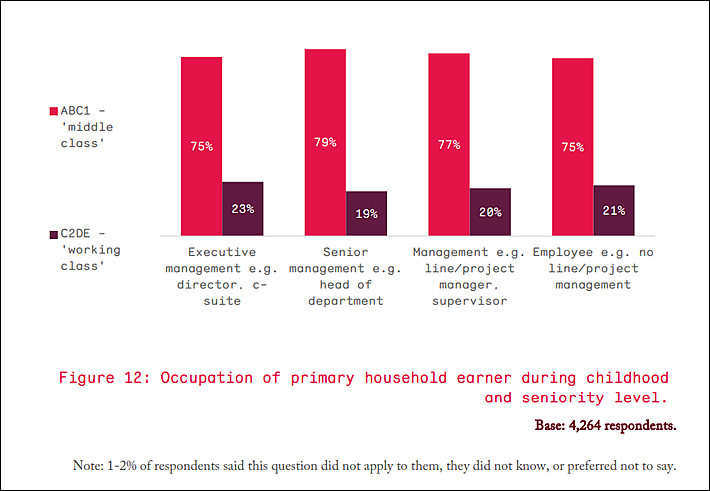 ‘The Future of the Book’

When asked about “the future of the book,” many who answer–especially inside the world publishing industry–will readily talk about digital developments and (if they’re up to speed) the challenge of those seductive competing entertainment media that surround us all.

“Clearly there’s much more work to do to create an inclusive working climate where everyone has a sense of belonging.”Michiel Kolman, IPA

But how many publishing folks respond to “future of the book” questions by turning to issues of diversity and inclusivity?

The future really may not be so much about digital-this and e-that. It might have more to do with whether publishers understand the societies they’re trying to sell books to. How much cultural wisdom do executives bring to the table when it’s time to hire? Whose input do editors seek when choosing their new lists? How open are marketing chiefs to the distinctions in what works for one community and not for another? How many press agents understand the public being wooed by public relations?

The UK Publishers Association’s leadership in diversity and inclusivity deserves careful international attention. And the organization’s determined effort is demonstrating techniques and producing observations that can be instrumental to any other book market of the world.

Each of those markets must simply find for itself the courage and grace to invest in such formal, rigorous self-examination.