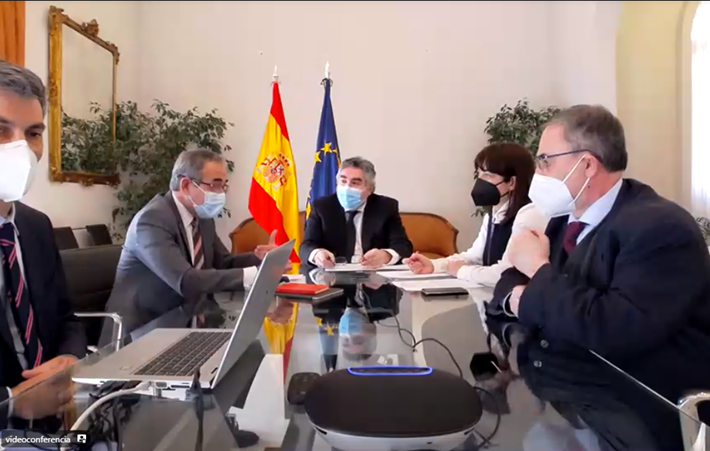 In a new FGEE survey of Spanish readers, the number of people reading weekly increased during the pandemic confinement, from 50 percent in 2019 to 57 percent in 2020.

José Manuel Rodríguez Uribes, Spain’s minister of culture and sports, center, is joined by Grupo Planeta’s Patrici Tixis, acting president of the Federation of Publishers Guilds, left of Uribes, at a news conference presenting the new report on reading during the pandemic year 2020 in Spain. Image: Spanish ministry of culture and sports

A 30.3-Percent Jump in Ebook Reading

Among the world’s 10 or so most comprehensive data-gathering book markets, Spain issues a well-researched  “Barometer of Reading Habits” report each year in late February. Today (February 26) the ministry of culture and sports in Madrid streamed a news conference to introduce the results if its new pandemic-year report on reading habits in Spain.

The Federación de Gremios de Editores de España (Federation of Spanish Publishers’ Guilds) “Barometer of Reading and Book-Buying Habits for 2020” makes its top-line finding clear: During the coronavirus COVID-19 pandemic’s most punishing lockdowns in Spain, the country’s readership reached a new high since surveys began: 57 percent of Spanish readers say they read at least one time per week during confinement.

Now bracing for what the nation’s health ministry has warned may be a fourth wave, Spain is among Europe Union’s hardest-hit countries, the fourth country in the bloc to pass 3 million confirmed cases.

Understandably, then, many of the top-line results of the new report—executed by Madrid-based Conecta Research and Consulting—are heartening to the beleaguered Spanish market and its consumers.

Some 81 percent of Spain’s readers say reading has helped them “better deal with the situation during confinement.” Among Spaniards older than 14, 8 percent say they read books throughout 2020. 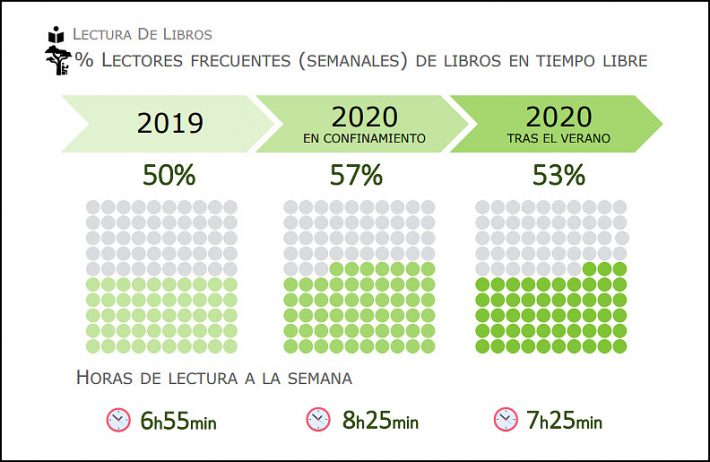 Leisure reading is in the lead for 64 percent of respondents, with 23.1 percent saying their reading is done work or studies.

For those concerned about how many fewer men read than women, there’s an interesting trend line revealed in the research that shows women’s reading dropping off steeply after age 64.

That drop occurs after a substantive rise in reading for women between ages 35 and 44. Seemingly, the bump in reading is sustained for about 20 years before diving in the late 60s.

For men, lifetime reading runs on a more stable glide path. It’s at its height (as is women’s) in the school years, of course, and then settles between ages 25 and 34 to a spot at which about 60 percent of men will report some reading at least once per week. The drop-off for guys starts in the mid-40s and makes a smooth descent to meet the women at around 49 percent near age 65.

You can see this in the graphic below.

There are, of course, never-readers in Spain, as everywhere: 36 percent of the population’s respondents tell Conecta in the 2020 study that they never or almost never read books.

The increase seen in the number of people who say they read as a leisure event in free time has been generalized to all of Spain’s autonomous sections. Catalonia and Andalusia have been the ones with the greatest increase: 2.3 points.

The reading of ebooks continues to grow in the 2020 statistics, showing that digital acceleration of adoption seen in so many markets during the pandemic, with 30.3 percent of Spaniards surveyed older than 14 saying they in digital format at least once per quarter.

Seven percent of Spaniards bought books (other than textbooks) in 2020, which is a jump of 1.3 percent over responses in 2019. The traditional bookstore remains the main channel for purchase and grew in 2020 overall, despite booksellers having to use work-arounds amid lockdowns and other restrictions.

The proportion of those who said they pay for electronic books increased substantially, by 39.8 percent. But most respondents said that if they downloaded an ebook, it was free. 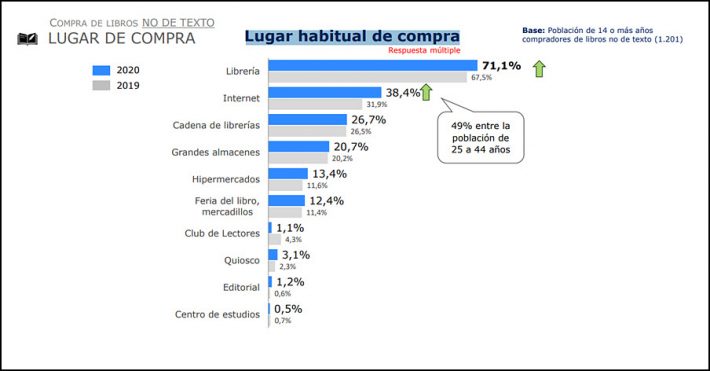 Reading to children was widespread in 2020, but there’s been a fall-off of almost 10 percent in households where children under 6 are read to, which is concerning, particularly in light of Scholastic’s research showing the importance of reading aloud.

After the age of 15, of course, the proportion of frequent readers in free time is notably reduced.

And because of lockdowns and mobility restrictions amid pathogen spread-mitigation, the percentage of the population that went to the library fell to 23.2 percent.

Pablo Linde reports for El Pais today that logistical issues are hobbling Spain’s vaccination efforts, something familiar in all too many nations. “While the country at one point was administering nearly all of the vaccines that were delivered,” he writes, “this is no longer the case.

“As more doses have arrived and the Oxford-AstraZeneca vaccine has been integrated into the program, the difference between the number of jabs received and those administered has grown. Healthcare representatives say this is largely due to organizational problems.”

More from Publishing Perspectives on the Spanish market is here, and more on publishing statistics is here.