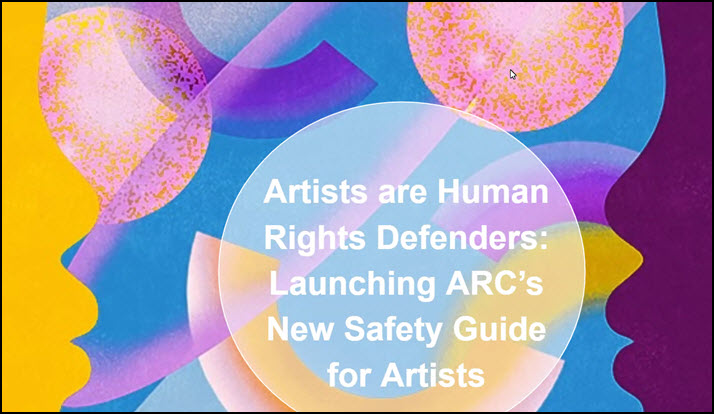 Focusing attention on ‘cultural rights defenders’—writers among them—PEN’s new ‘Safety Guide for Artists’ outlines issues, protocols, and resources for those working for freedom of expression and publication. 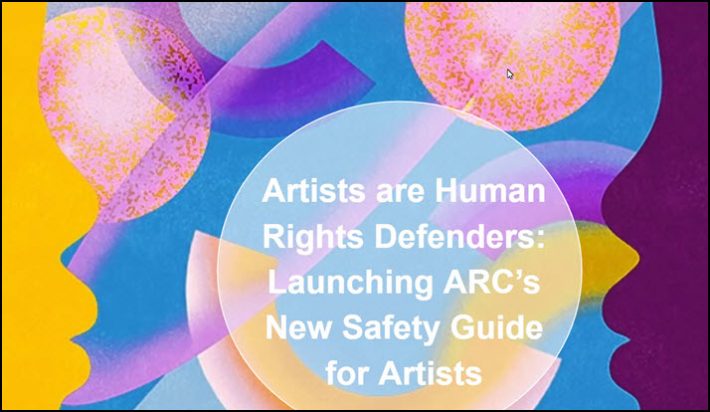 In a presentation today (February 3) to help introduce its new Safety Guide for Artists, PEN America held a morning discussion on “cultural rights defenders” and their place among those who work for human rights.

Today’s discussion was moderated by Julie Trebault, who directs the Artists at Risk Connection (ARC) project at PEN, a program supported by the Andrew W. Mellon Foundation. It’s the Artists at Risk Connection group that’s behind the new Safety Guide. She was joined by program coordinator Gabe Fine, who walked viewers through the guide’s various sections. Fine said that in 2020, the organization had more requests than at any other time relative to artists in need of assistance.

The guide is divided into 12 sections, some of the most practical having to do with “Patterns of Persecution,” “Defining Risk,” “Preparing for Risk,” “Digital Safety,” and “Documenting Threats.” 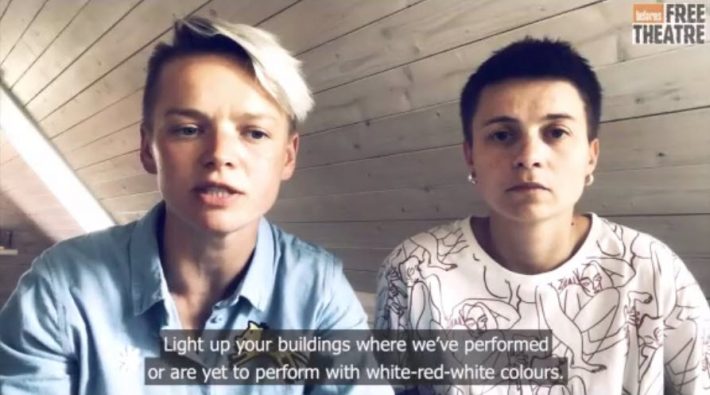 While your first thought in terms of danger to writers may be in the journalists’ corps, Publishing Perspectives’ readers know from our recent coverage of the protests against the Lukashenko regime in Belarus that any category of writers can be targeted, especially in instances of authoritarian action. The European Writers’ Council, led by Nina George, has been particularly proactive in addressing the situation on a sustained basis. 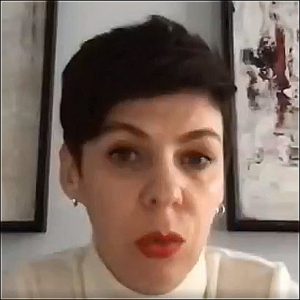 Natalia Koliada of the Belarus Free Theatre, in fact, spoke about how naïve writers and the populations they serve can be on the topic of “safety and security—people simply don’t know what it means,” she said. “In countries like Belarus, we don’t particularly think about those options.

“When we talk about safety and security under dictatorship,” she said, one thing this means in Belarus is that “people need to be smuggled out. But we’re [also] talking about cybersecurity, financial security.” A problem is that many who need help, she said, can “fall between arts and politics” so that a framework of support is hard to find.

Koliada, speaking of hundreds of arrests of cultural workers in Belarus, showed a short video appeal from the government-banned Free Theatre’s co-managing directors, Svetlana Sugako and Nadya Brodskaya. They were jailed in August for five days, seized while protesting at a polling place. Sugako and Brodskaya tell of being held in a cell with four beds for 36 people, without food and drink and inadequate air.

As our readers know, writers including the 2015 Nobel winner Svetlana Alexievich have been harassed by Lukashenko’s regime during the protracted protests of more than eight months’ duration. 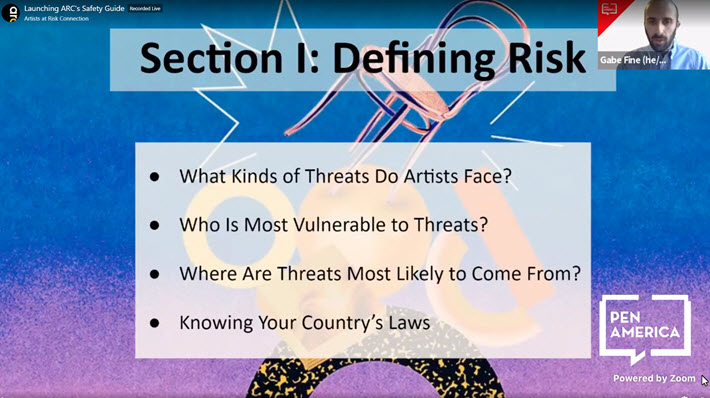 PEN’s release of its Safety Guide offers sobering advice for those whose situations become precarious. “If something gives you pause, don’t ignore that feeling,” the guidance reads. “Ask yourself: Why does this make me uneasy? What about this artistic endeavor might be endangering my work or safety? If your gut is telling you that you might be putting yourself in a sticky situation, your gut is probably right. That said, even in situations that don’t seem excessively risky, preparations never hurt.” 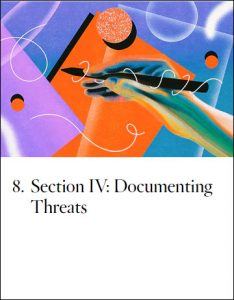 And PEN’s release of the  new guide coincides with two  major flashpoints in recent days.

“Russian authorities are engaged in a disgraceful pressure attack on the free press,” the organization has reported. Detentions of some 80 journalists are reported to have included the editor-in-chief of the independent news outlet Mediazona Sergey Smirnov; Sergey Parkhomenko of Echo of Moscow; Mikhail Zelensky of Cold; Elena Kostyuchenko of Novaya Gazeta; Danil Turovsky of vDud; Anton Feinberg of RBC; Anton Osherov of moloko plus; Valeriya Savinova of MBH Media; and Iván Kleimenov, among others.”

And in Myanmar, PEN reports, the military’s junta in which Aung San Suu Kyi has been detained is a direct threat to free expression.

Suzanne Nossel, PEN’s CEO, writes, “By detaining political leaders, disabling the Internet, and seizing control of television stations, the military is reasserting brute force as the new law of the land in Myanmar, setting back the country’s long faltering hopes for democracy and the protection of human rights. The international community and Myanmar’s neighbors should reject this effort to sink the country back into the dark days of military rule.

“They should insist on respect for the outcome of democratic elections, freedom of the media to report on breaking developments, open access for citizens to news and information through the internet and phone service, and the release of all political prisoners, including writers and activists.” 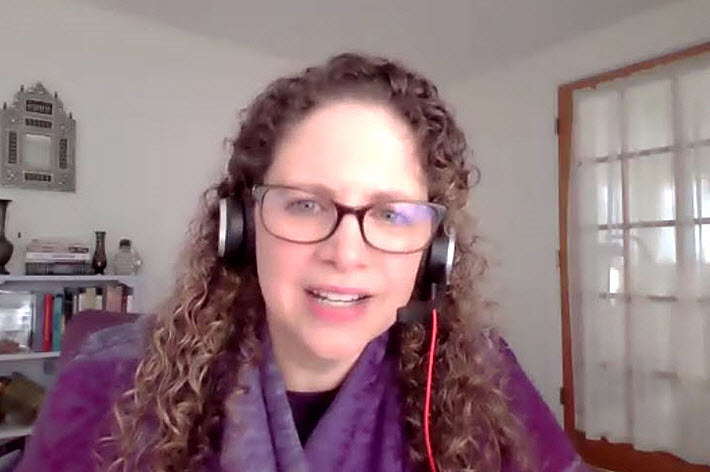 “According to Article 1 of the United Nations’ Declaration on Human Rights Defenders,” said Bennoune in her comments, “everyone has the right to strive for the realization of human rights. Hence the work of cultural defenders—including the defenders of artistic freedom—is grounded in international standards and law.”

Benefits can include “funding, acknowledgment, protection, and various forms of support,” for culturally based human rights defenders—writers and authors being good examples—who too frequently aren’t recognized as they should be.

What PEN America is trying to do, then, is establish more traction and standing for cultural rights defenders—starting by informing those defenders with the new Safety Guide of what they need to do and what support they should expect and receive.

The organization’s new guide is aligned with Bennoune’s insistence that full recognition and support needs to be granted to cultural rights defenders as it is for those who work to maintain and broaden other rights structures.

The new guide from PEN, Bennoune said, “takes this message forward and operationalizes it.”

Today’s presentation from PEN with Bennoune and its other speakers has been recorded and can be found here.

The new Safety Guide for Artists is here.

More from Publishing Perspectives on freedom of expression is here and more from us on the freedom to publish is here. Our coverage of Belarus is here and coverage of the work of PEN is here.