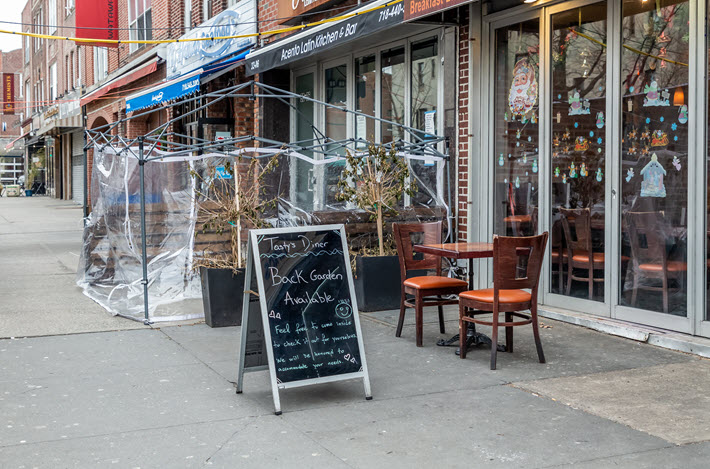 One-third of growth in print in the States was driven by juvenile fiction last year, NPD BookScan reports, as the overall numbers comprised 751 million units.

At a diner in New York City’s Astoria Queens on Ditmers Boulevard, a sign directs customers to outdoor dining in a back garden. Image – iStockphoto: PhotosByCate

In a statement issued to the news media today (January 7), the NPD Group has announced that print book sales in the US rose 8.2 percent in 2020.

That 8.2-percent figure is calculated year-over-year and represents 751 million units.

In a prepared statement this afternoon, NPD Books analyst Kristen McLean says, “The US consumer book market looks very different today, than it did back in April.

“Sales growth came in waves, from the sudden need to educate kids at home, to the super-heated political cycle. All of the additional time people spent at home created a big appetite for reading, including huge spikes in sales of cookbooks and do-it-yourself books, which helped people stay entertained and engaged.”

As Publishing Perspectives readers will remember, what McLean is referring to is an extraordinary performance in a market that looked badly slammed by springtime mitigation efforts as coronavirus COVID-19 outbreaks spread to a quick turnaround and impressive strength through most of the rest of the year.

And as recently as mid-December, McLean was issuing special commentary on that adult nonfiction super-category which, of course, was powered in no small part by political books—not only books related to the Donald Trump administration but also strong titles on topics of race in America.

By December 17, Penguin Random House had announced that Barack Obama’s A Promised Land had sold 3,320,000 in all formats in Canada and the United States in its first month. As of the 17th, the book had 4.7 million copies in print in the U.S. and Canada, following an initial printing of 3.4 million copies.

What many industry observers are watching now is whether the interest in these themes will continue as the Joe Biden administration is inaugurated in 13 days, on January 20–and as such developments as Raphael Warnock’s and Jon Ossoff’s Senate victories Tuesday (January 5) in Georgia swing the Senate to a new majority profile with vice-president-elect Kamala Harris as tie-breaker. 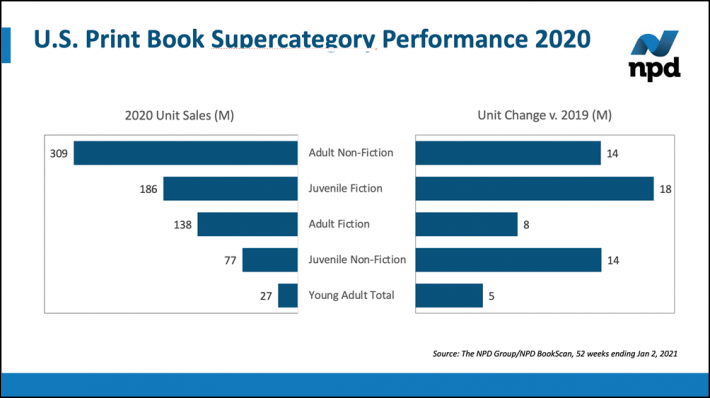 While the politically and socially driven elements of the market may have captured a lot of the attention, juvenile fiction was on a roll, too.

Adult nonfiction print books, the largest category of books in the States by both volume and sales revenue, increased 4.8 percent (14 million units), year over year, in 2020.

And juvenile nonfiction—a category that McLean has pointed to for years as being a strong driver—grew 23 percent (14 million units). 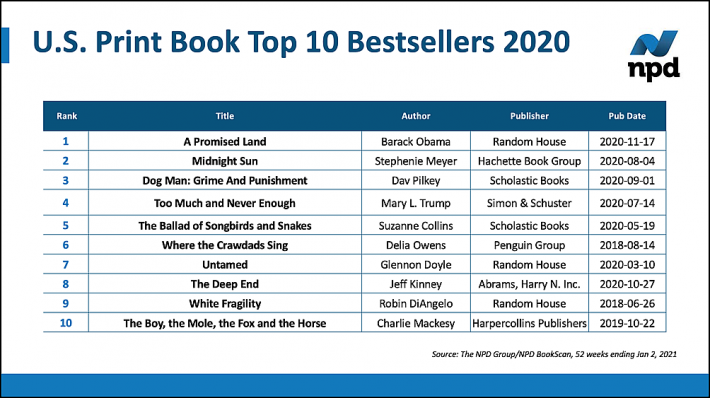 In both caseload and death toll, the States’ numbers far exceed all other nations’ as the Trump administration comes to a close. The nearest nations in terms of these numbers are India, with 10,395,278 cases and Brazil, with 198,974 deaths.

Today, the States has marked its deadliest day of the pandemic, Madeline Holcombe and Dakin Andone reporting for CNN that there have been 3,865 new cases registered today.

“The US Centers for Disease Control and Prevention’s most recent forecast projected there will be between 405,000 and 438,000 deaths by the end of the month,” write Holcombe and Andone. “The previous forecast, published December 30, projected up to 424,000 deaths by January 23.”

Under the Trump administration’s inadequate vaccination distribution plan, the effort to inoculate citizens is off to a stumbling start, falling far below the White House’s promises of 20 million vaccinations in arms by the end of the year. At The New York Times, Rebecca Robbins and Christina Morales report that the outgoing administration has said it will engage pharmacies in the inoculation program.