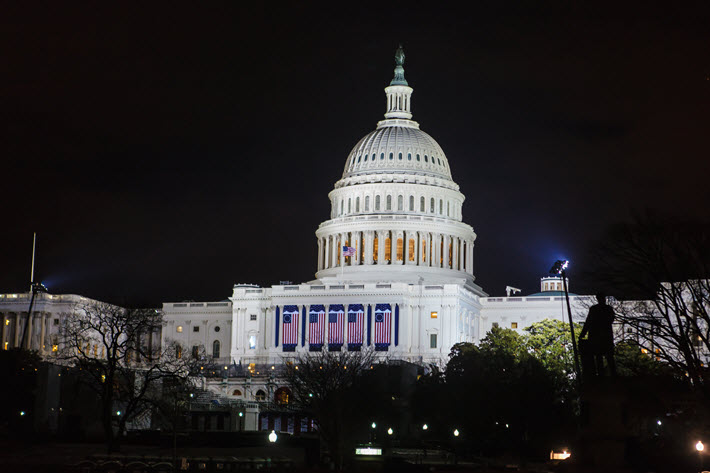 The controversial book of right-wing senator Josh Hawley—canceled by Simon & Schuster—is now to be published by a conservative press that S&S distributes.

The Capitol on the night of January 21, 2013, the second inauguration of Barack Obama. Image – iStockphoto: Rypson

S&S as Distributor, Not Publisher

Overnight news on the book shopped to publishers by Sen. Josh Hawley, Republican of Missouri, has refueled the controversy that led to the January 7 cancellation of the title by Simon & Schuster, making it appear that political books could be in for another strong ride this year in the US market’s hot nonfiction sector.

Even after that day’s rampage on the Capitol in Washington that critics say Donald Trump incited, Hawley persisted with his objections to the vote as senators came back, shaken after the riot, to fulfill their duty and confirm Biden’s win.

In announcing its cancellation of Hawley’s contract on The Tyranny of Big Tech, S&S at the time said, in part, “As a publisher it will always be our mission to amplify a variety of voices and viewpoints: at the same time, we take seriously our larger public responsibility as citizens, and cannot support Sen. Hawley after his role in what became a dangerous threat to our democracy and freedom.”

But on Monday night (January 18), it was learned that the book has been picked up for publication by Regnery Publishing, which specializes in what it terms “conservative books for independent thinkers.”

As many in the American publishing industry have been quick to point out, Regnery’s books are distributed by Simon & Schuster.

Some who took to social media and various industry forums today see Simon & Schuster as being in bad faith, having rejected the book for publication—over Hawley’s vehement complaints—only to end up its distributor when the title is published by another house in early May.

When Publishing Perspectives asked on Monday evening whether Simon & Schuster had a comment for the news media on the situation, the publishing house declined to speak to the situation.

And yet the news had stirred a flurry of reaction among media industry pundits. Matt Gertz, a senior fellow with the misinformation watchdog nonprofit Media Matters, pointed out on Twitter that he had predicted Hawley’s jump to Regnery on January 8:

Oh look the thing that was obviously going to happen has happened. pic.twitter.com/fCjYf93UoP

Can Criticism, Even Censure, Sell Books? 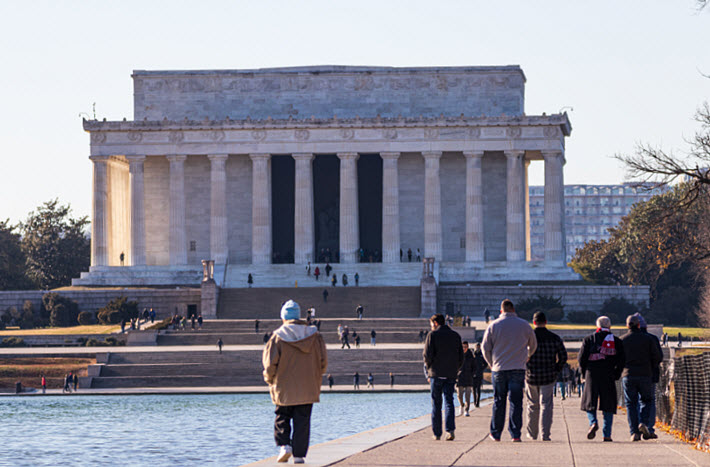 Joe Biden and Kamala Harris, the US president- and vice-president-elect, are to lead a service at the Lincoln Memorial’s reflection pool for the more than 400,000 Americans who have perished in the COVID-19 pandemic — the first presidential recognition of the grief of the crisis in the United States. Image – iStockphoto: JL Images

There’s a parallel here with the 2016-2017 controversy around the Milo Yiannopoulos book contracted by a Simon & Schuster imprint and then canceled by the publishing house. In that case, industry outcry played a key role in S&S’ change of plan, while several years later, Democratic communications staffer Celeste Pewter led an email campaign of complaints lodged with the publisher over the Hawley book. 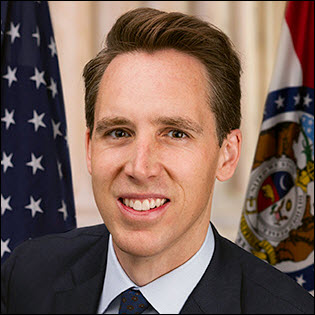 On the eve of Joe Biden’s Wednesday (January 20) inauguration, the political crosscurrents are running fast.

In Hawley’s state, Missouri–home to the constituents he repeatedly cites as the drivers of his actions–the Springfield News-Leader today notes that “Democrats set to control the Senate later this month are reportedly considering censure of Hawley and Cruz if they don’t heed calls to resign.”

But the newspaper’s story, written by Austin Huguelet and Brianne Pfannenstiel, does find voters in Hawley’s base who support him, even as major backers such as Missouri Republican icon and former senator John Danforth has called his earlier support of Hawley, “the worst decision I’ve ever made in my life.”

Hawley’s poll numbers, the News-Leader reports today, are “underwater even among Republicans.” And one of the now best-recognized and most reviled photos from the January 6 storming of the Capitol is an Associated Press still in which Hawley is seen entering the building for the certification of Biden with a fist raised reportedly in solidarity with the gathering rioters.

Brian Stelter, CNN’s chief media correspondent, has pointed out on Reliable Sources how Hawley’s activities and remarks became one of the main storylines of front-page news that followed the events of January 6. 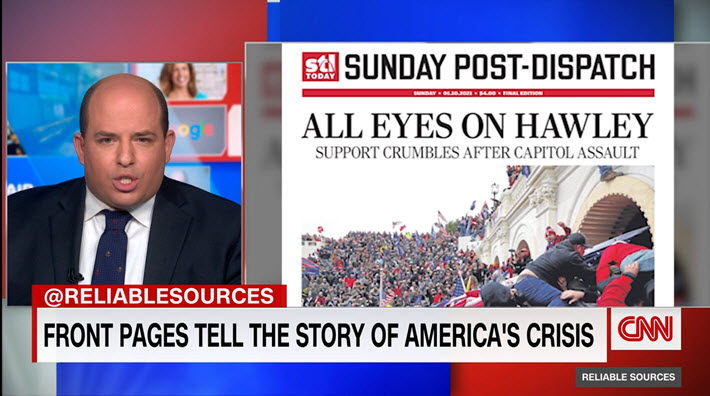 Clearly, Hawley has an uphill climb, the influential Sen. Mitt Romney (R-UT) having said–as reported by the Associated Press and PBS News Hour—”Those who continue to support Trump’s ‘dangerous gambit’ by objecting to the results of a legitimate, democratic election ‘will forever be seen as complicit in an unprecedented attack against our democracy.'”

And yet, Andrew Desiderio at Politico today is reporting that Hawley has announced he’ll object to fast consideration of Joe Biden’s nominee, Alejandro Mayorkas, for Homeland Security chief. Hawley is objecting, he says, over issues involving the country’s southern border and immigration–which play into the Trump base’s core drivers of racism and fears of a nation no longer predominantly white.

For the publishing industry, the energy around the Hawley situation may indicate that the strong interest in political books seen during the Trump years will have legs. Some of the most insightful and astute writings of the genre have come to publication, particularly in the latter two years of the Trump saga. 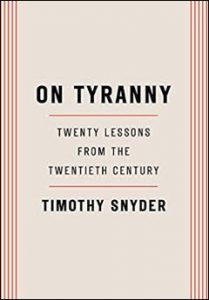 Have a look at this: Timothy Snyder’s On Tyranny: Twenty Lessons from the Twentieth Century (Penguin Random House / Tim Duggan Books) today stands at No. 5 on the Amazon Charts in most sold nonfiction in the States–three years after it was released. This quick read has stood on the Amazon list for eight tumultuous weeks. That may be because it’s striking at several points for its prescience.

Snyder’s Chapter 6 is titled “Be Wary of Paramilitaries.” In that chapter, he writes, “When the men with guns who have always claimed to be against the system start wearing uniforms and marching with torches and pictures of a leader, the end is  nigh. When the pro-leader paramilitary and the official police and military intermingle, the end has come.”

Those lines have a peculiar punch today, as the US National Guard is reported to be removing at least 12 troops from their assignments at the Biden inauguration because they’ve been determined to have right-wing sympathies. Here’s The New York Times’ report on that from Eric Schmitt and Helene Cooper.

Exactly where the deeply divided body politic of the United States will take the publishing industry in this first year of a new administration remains to be seen. But in writing on January 12 about Simon & Schuster’s original cancellation of Hawley’s book on January 7, the Council on Foreign Relations’ Max Boot—the author himself of The Corrosion of Conservatism: Why I Left the Right from WW Norton’s Liveright– points to Hawley’s very typical rightist response in which he charges that S&S was in some way limiting his freedom of speech by closing its contract with the senator.

“Simon & Schuster decided to cancel a book by Sen. Josh Hawley (R-Mo.),” Boot writes, “leading him to rage against the ‘woke mob’ in ways that he has never done against the MAGA mob that invaded the US Capitol.

“He even called the publisher’s move a ‘direct assault on the First Amendment,’ as though every American has a constitutional right to be published by Simon & Schuster.”

In short, we can anticipate even the popularity of being published to create demonstrations of how various viewpoints on the political landscape handle the business of the industry—and how they react to publishing’s decisions.

It will be a time for careful, prudent, and forthright assessments of contracts by publishers—and of a clear-eyed purview of the political contexts in which those contracts are being drawn up. 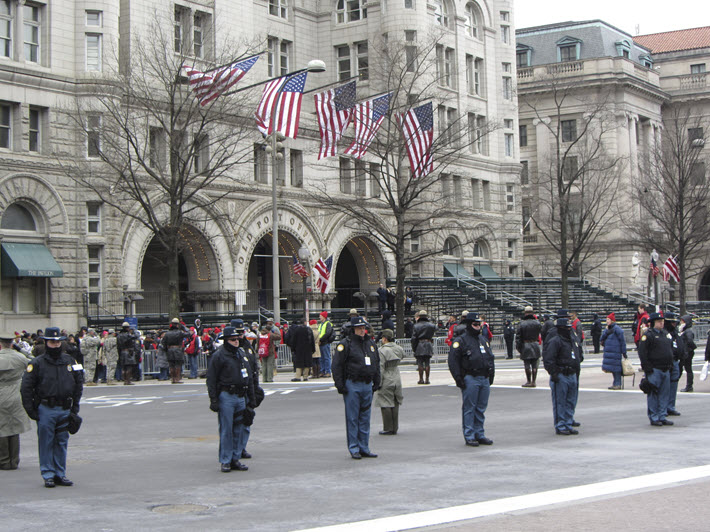 At the Old Post Office in Washington, DC, on January 21, 2013, the second inauguration of Barack Obama. The building in October 2016 would open as the Trump International Hotel. Image – iStockphoto: Coast-to-Coast