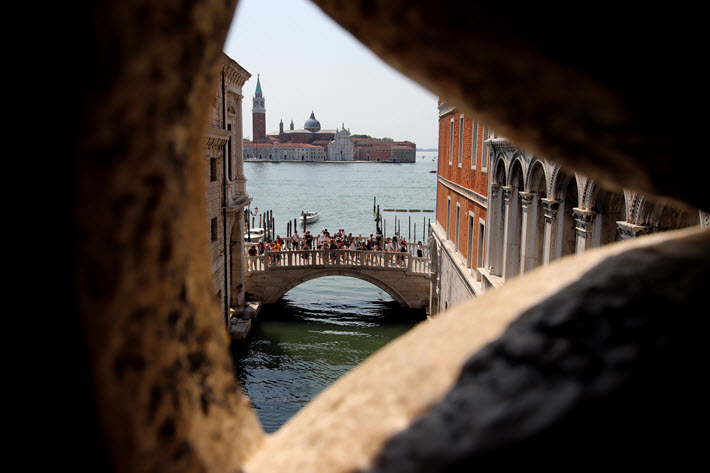 Overall in 2020, the AIE and ALI with Nielsen have reported, Italians purchased 104.5 million books and online commerce jumped from 27 percent to 43 percent. 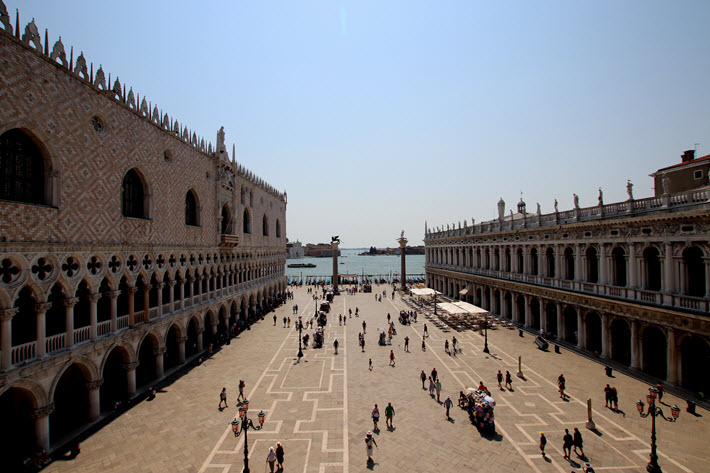 A 36.6-Percent Increase in Ebook Sales

Trade book publishing in Italy overall grew by 2.4 percent in 2020, for a total of some €1.54 billion (US$1.9 billion), based on cover prices and according to data presented today (January 29) as part of the 38th Scuola per Librai Umberto e Elisabetta Mauri program.

As was mentioned in Publishing Perspectives’ preview of the symposium, Ricardo Franco Levi, president of the Association of Italian Publishers (Associazione Italiana Editori, AIE), joined the Italian Booksellers Association’s  (Associazione Librai Italiani, AIE) Paolo Ambrosini to apprise the audience of how Italy closed one of the most challenging years for its book industry in modern history.

An online gathering of close to 1,000 publishing and bookselling professionals in 29 countries were on-hand for the event normally held on the island of San Giorgio Maggiore in Venice.

Levi, who is also vice-president of the Federation of European Publishers (FEP), praised “the dedication of our publishers—who have continued investing, even in the most difficult months.” He went on to commend the market’s booksellers, in addition to “the Italian government and parliament, which launched an extensive aid plan and chose, for the first time, to consider books as essential goods, thus allowing bookshops to remain open during the lockdowns.”

The AIE and ALI’s figures were developed by the AIE Research Office, working in cooperation with Nielsen’s very robust Italian installation.

And it should be noted that with the support of the culture minister Dario Franceschini, a good deal of the credit for the Italian publishing industry’s success goes to Levi, himself, who used his background in government posts to orchestrate a determined series of appeals to the government of Giuseppe Conte—who John Follain and Chiara Albanese report for Bloomberg, is likely to achieve the support he needs to form a new government.

Highlights of the Italian Report 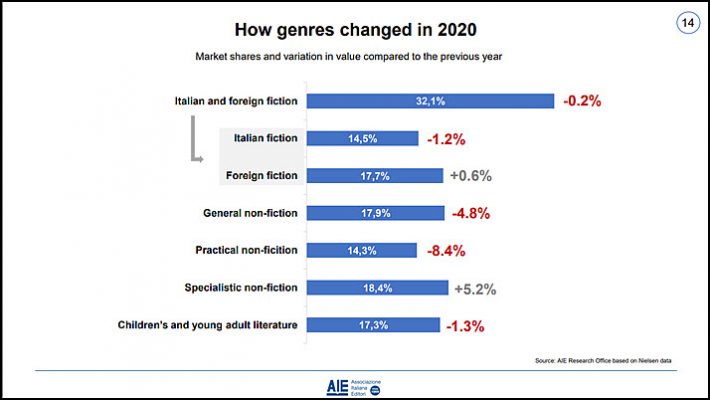 “Bookshops, and physical channels in general, according to the AIE/ALI report, have lost market share to online channels, which increased from 27 percent in 2019 to as much as 43 percent in 2020.”

The new report acknowledges as “noteworthy” the fact “that a large portion of the sales are made by a single operator is noteworthy.” The authors of the report, though, say that physical bookselling channels “did win back some ground from the online market during the year, going from 52 percent in April to 57 percent at the end of December.

In an echo of the problems experienced by major chain bookstore outlets in China’s largest “Tier 1” and “Tier 2” cities in the pandemic year, the Italian report says, “Times have proved to be particularly hard for bookshop chains, such as those located in the tourist centers of art cities, in shopping centers, railway stations, and airports.” 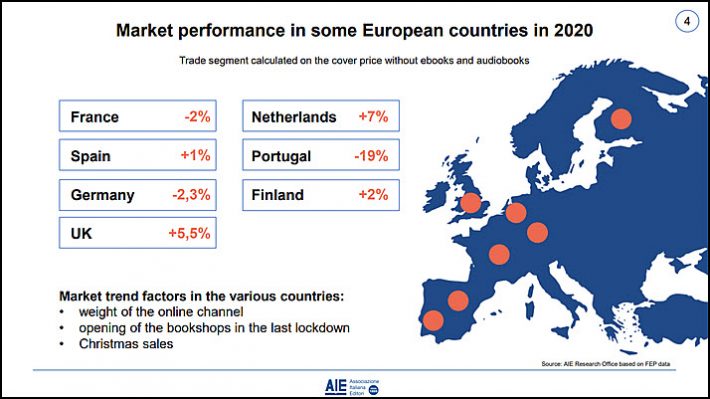 “The positive Italian result (0.3 percent), excluding ebooks and audiobooks,” today’s report’s authors write, “is higher than those achieved by France and Germany, which respectively suffered losses of 2 percent and 2.3 percent.

“It’s only slightly lower than the Spanish figure (+1 percent).”

Of the countries currently capable of providing this class of figures, the AIE and ALI say, three markets show significantly better performance than Italy:

Portugal—as would be mentioned several times during the day—witnessed a major drop in sales (-19 percent), a fact deemed to be heavily attributable to a weak e-commerce infrastructure and tradition.

“Our data were in line with those of France and Germany until October,” Levi said. “Opening the bookshops during the last lockdown [our report on this is here] was the element that made the difference.”

The report does note that drops in physical bookstore sales are a common concern throughout Europe. 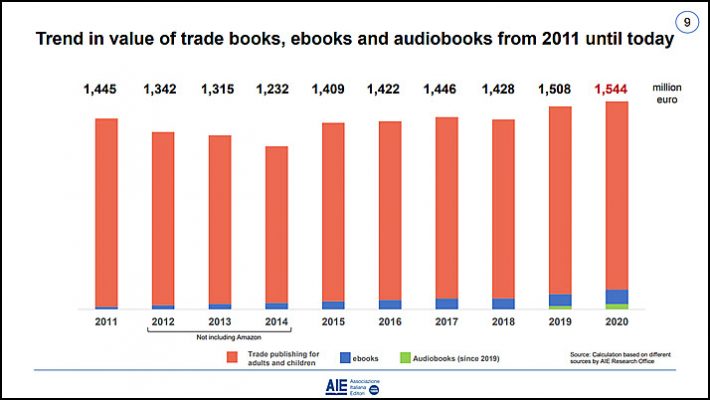 “In this scenario,” Levi said, “our country has stood out for its extensive public support plan, obtained also thanks to the close collaboration between the Italian associations of publishers, booksellers and librarians.” That joint effort in demanding state support and attention, he said, “led to measures used as a model in the rest of Europe, focused on boosting the demand, in both the public and private sectors.”

More notes on the overall findings from 2020 include the fact that educational publishing, “which played a key role in distance learning, experienced a year compromised by a limited renewal of the textbooks chosen for use.

“Academic publishing fared better,” the report says, “thanks to the focus placed on books in distance learning, and because the lockdown reduced the phenomenon of pirate copies, a problem that will recur when the universities reopen and more light is thrown onto “the alarming crisis of academic bookshops.”

Three sectors—art, tourism, and professional legal publishing—also are understood to have met with particular struggles in Italy’s battle with the coronavirus COVID-19 pandemic in 2020.

The closing slide of the AIE report on statistics for 2020 at the all-digital edition of the Scuola per Librai UEM read, “We Miss Venice So Much!”

A view from the Ponte dei Sospiri (the Bridge of Sighs) toward the island of San Giorgio Maggiore, June 30, during a dearth of tourism in Venice. Image – iStockphoto: Africanway